After much intense persuasion I finally managed to entice one of my best mates into a game of Warhammer 40,000 this weekend. He has drifted out of the hobby recently due to the constant intrusion of something called 'real life' that keeps getting in the way. For me this is a real shame as he is an accomplished painter and we have been gaming together for over fifteen years.

Anyway after much persistence he finally buckled and brought his force of Black Templars around to my house in order to face the might of my own Crimson Fists... It's always nice to see the sons of Rogal Dorn smashing the shit out of each other whilst trying to dream up a narrative as to why these erstwhile brothers are fighting each other....

'Damn.' cursed Chapter Master Pedro Kantor as he gazed over the distant horizon and made out the distinctive silhouettes of Black Templars Space Marines moving steadily towards his own position. He shook his armoured head and slowly turned to face the huge form of his second-in-command, a Captain of the Primaris type named Alverez, 'Captain, the enemy approach; assemble your men and move to your ordained positions.'

'Aye Lord' answered the Captain gruffly before turning ponderously in his massive suit of ornate Gravis pattern armour and moving off to brief the two Primaris Lieutenants who waited eagerly nearby. Kantor watched him leave and then turned back to observe his sable clad foe adopting their own pre-battle positions. In his hearts he still struggled to believe that it had come to this, two ancient chapters descended  from the lineage of Rogal Down about to engage each other in open conflict when the galaxy was full of far more worthy foes for the Astartes to focus their wrath on... and all because of something so trivial as honour and pride.

The Crimson Fists had arrived on the world of Caldor's Point after the warp storm that had enveloped the planet for the past few millenia had finally evaporated some weeks earlier. This particular world was known to the Chapter from numerous mentions within their archives as having been discovered and conquered for the Imperium by the founder of the Crimson Fists, Alexis Polux, when he had been a mere Commander in the Imperial Fists Legion during the Great Crusade.

This fact meant that by tradition and law their Chapter should be able to claim recruiting rights from the world in order to fill their depleted ranks with new Astartes. The world was ideal for this purpose; as a quasi-feudal planet its indigenous populace were hardy, robust and would make excellent candidates for Space Marine selection. This was very welcome as the Chapter was in dire need of fresh blood following the heavy war of attrition that had occurred on Rynn's World. However on arrival in system the Fists had found that a significant detachment of Black Templars under the command of their own Chapter Master, High Marshal Helbrecht were already making planet-fall with the intention of claiming the world for their own recruiting needs.

The two Chapter Masters had exchanged greetings and Helbrecht had explained that his own records indicated that the world had been conquered by his Chapter's Founder, Sigismund when he too had been an officer in the VII Legion, therefore he stated that his claim took primacy. The two Astartes had initially discussed the matter, and then argued... and then fought over the topic but neither would back down nor concede the claim of their opposite number...and so it had come to this; open warfare amid one of the world's deserted townships. Only one side could win and to the victor would go the spoils...

So there we go, now that we have a story to set the scene, all we need are the forces who will fight this battle: 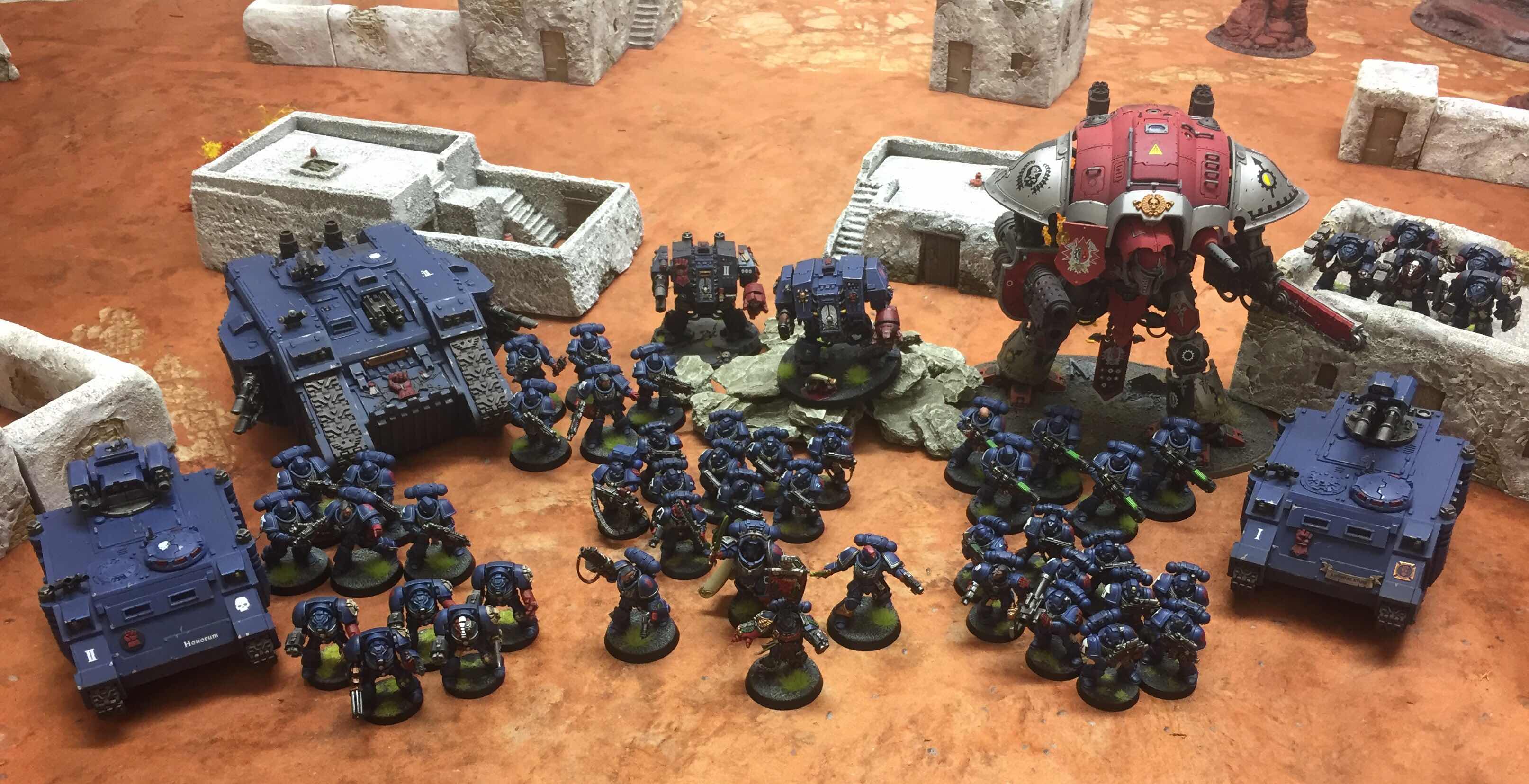 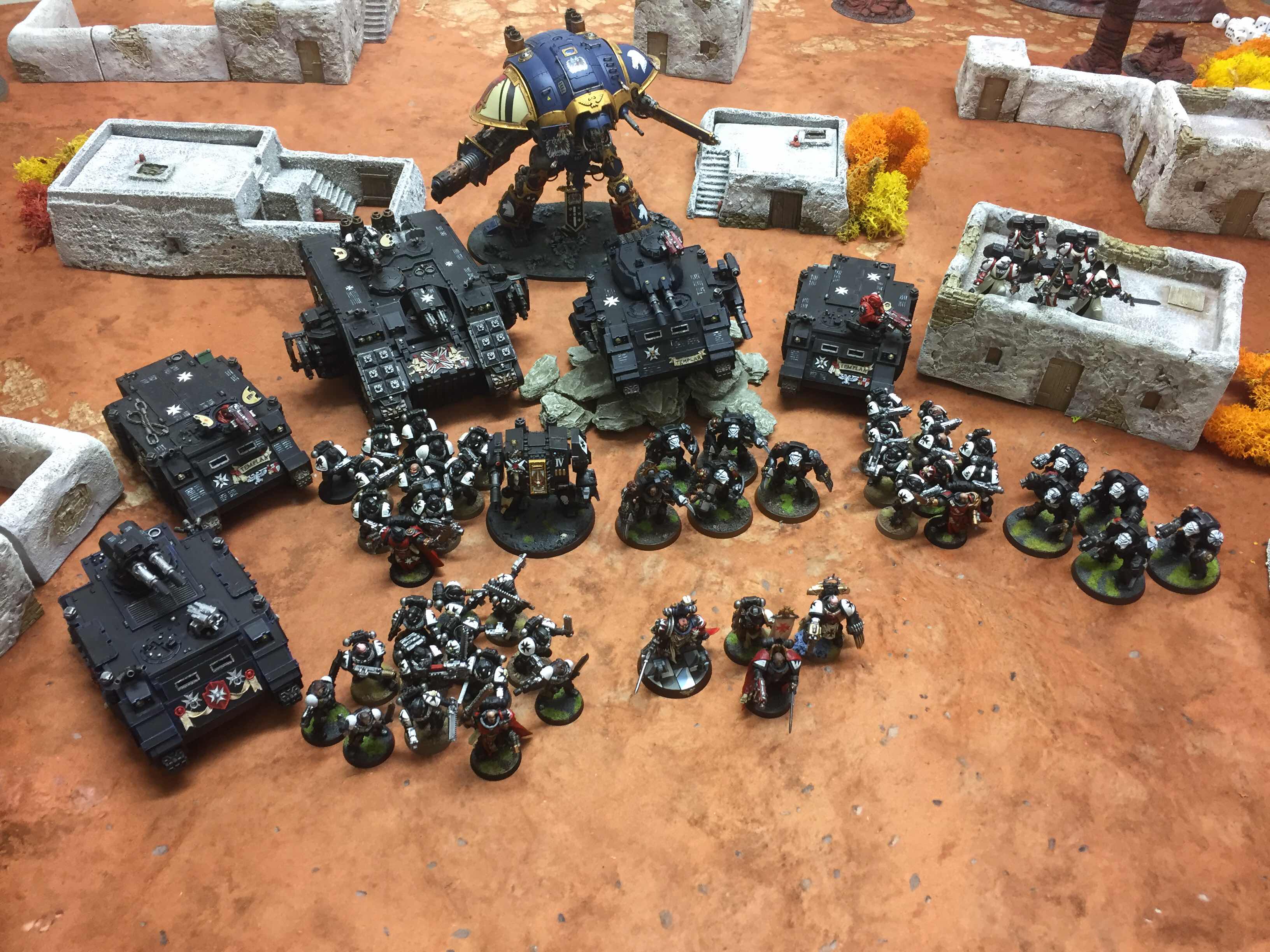 As you can see these were two fairly significant armies that both came in at just over 150 Power Points. Each force consisted of a reasonable balance of infantry and armour and fitted within the Battalion Detachment format thereby generating 8 Command Points per side.

Both armies were led by their respective Chapter Masters and a cadre of senior officers that should provide a command buff to troops nearby. However unusually these weren't the dominating models on the table... this honour was taken by the towering Imperial Knights that both factions had brought to the battlefield.

Mission-wise we went for one of the missions that generates three Tactical Objectives each turn as I have found these types of battles are much more fun than the generic boring games of 'Space Marine Duck Hunt'. 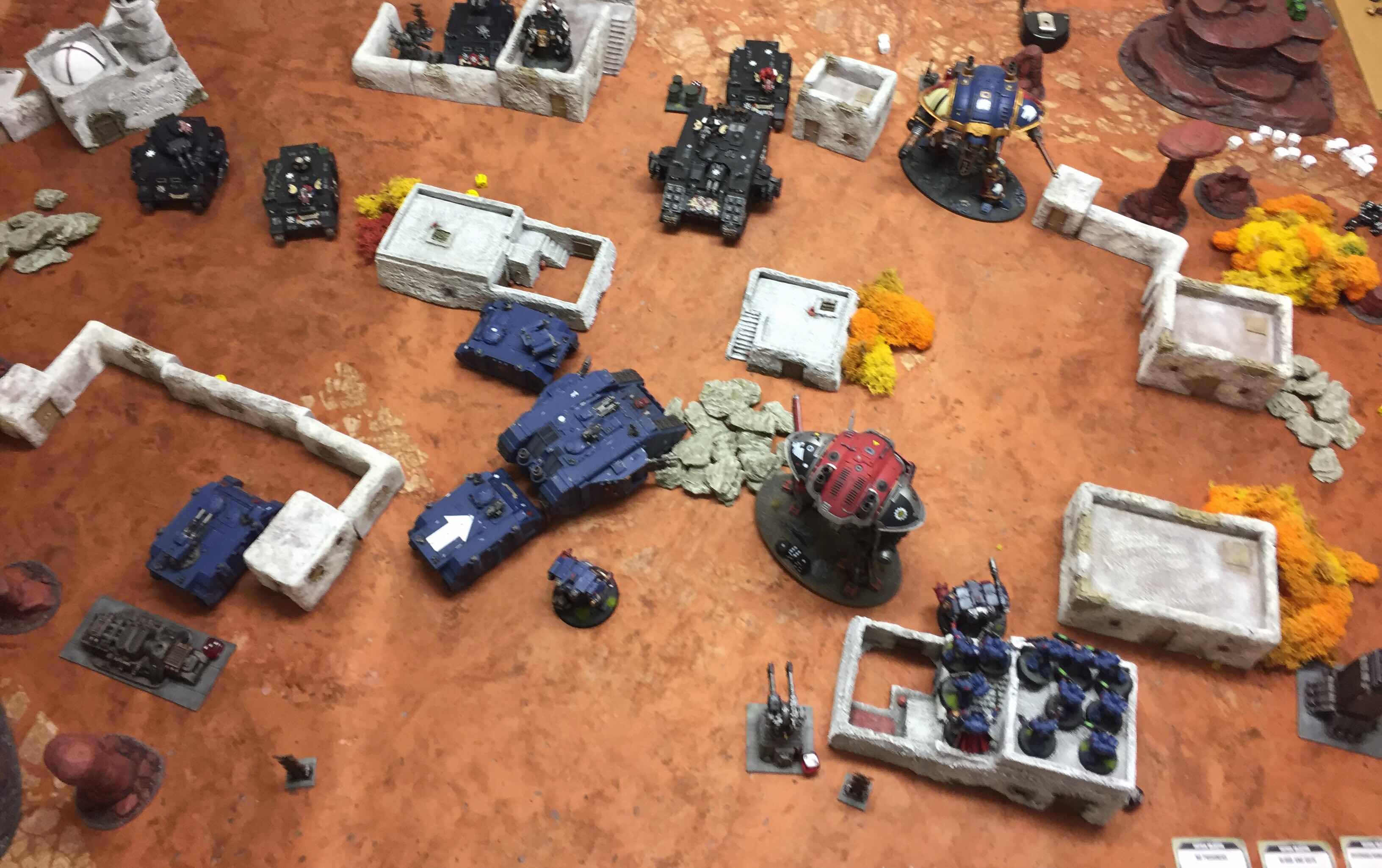 As expected the first turn was predominantly spent focused on maneuvering as the armies attempted to position themselves to smash each other up or claim landmarks depending on which objectives they had drawn from their respective decks. 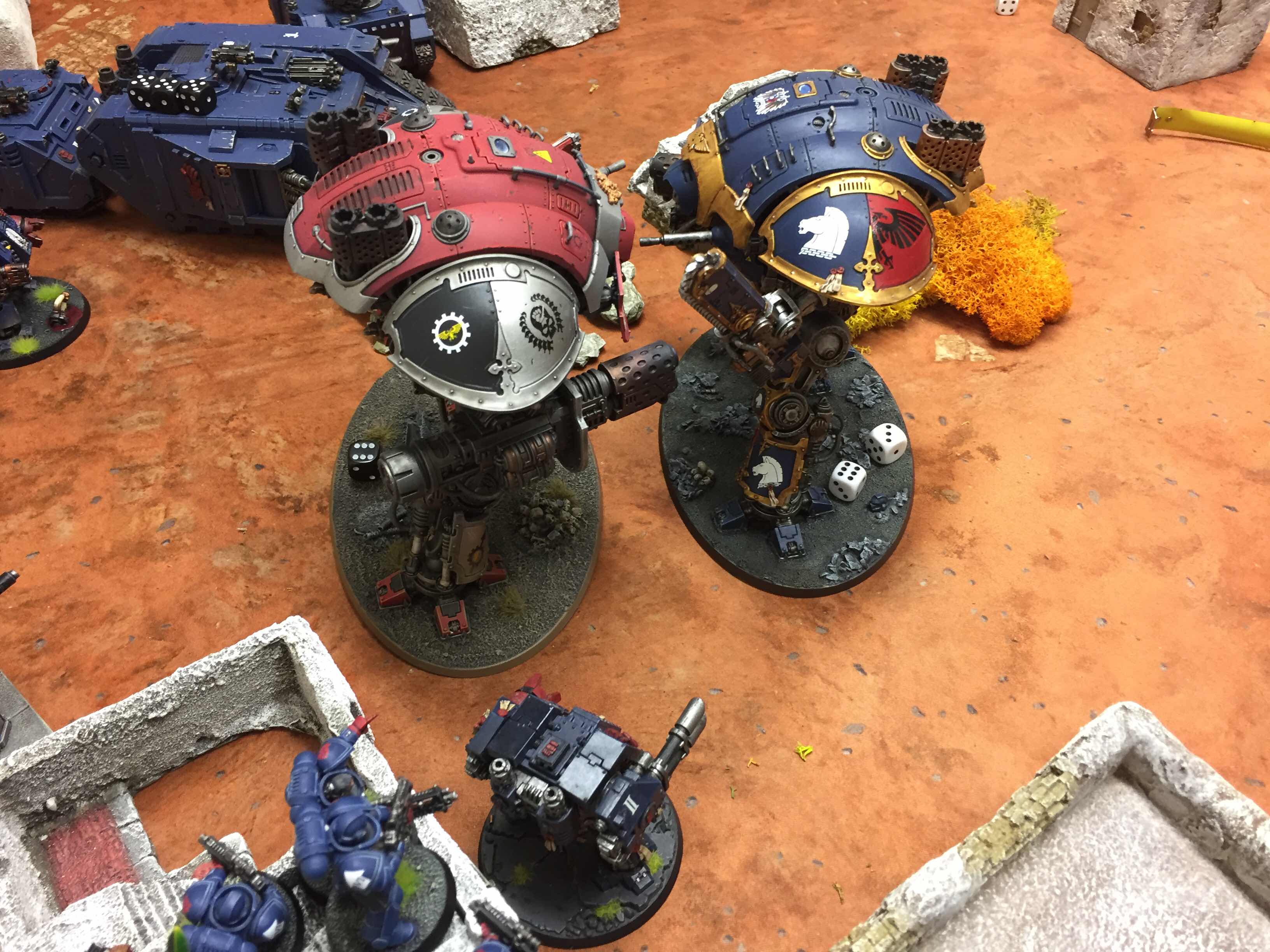 Now those of you who have read my recent battle reports will know that I have frequently stated that eighth edition is far more bloody than its predecessors and that even in the first turn of the game you inevitably find yourself removing large numbers of troops from the table...

Well... that is not the case when there are Knights on the table...because both of us spent the entire first couple of turns firing every single gun we had at the opposing Knight desperately trying to strip wounds off them (they start with 24)!! 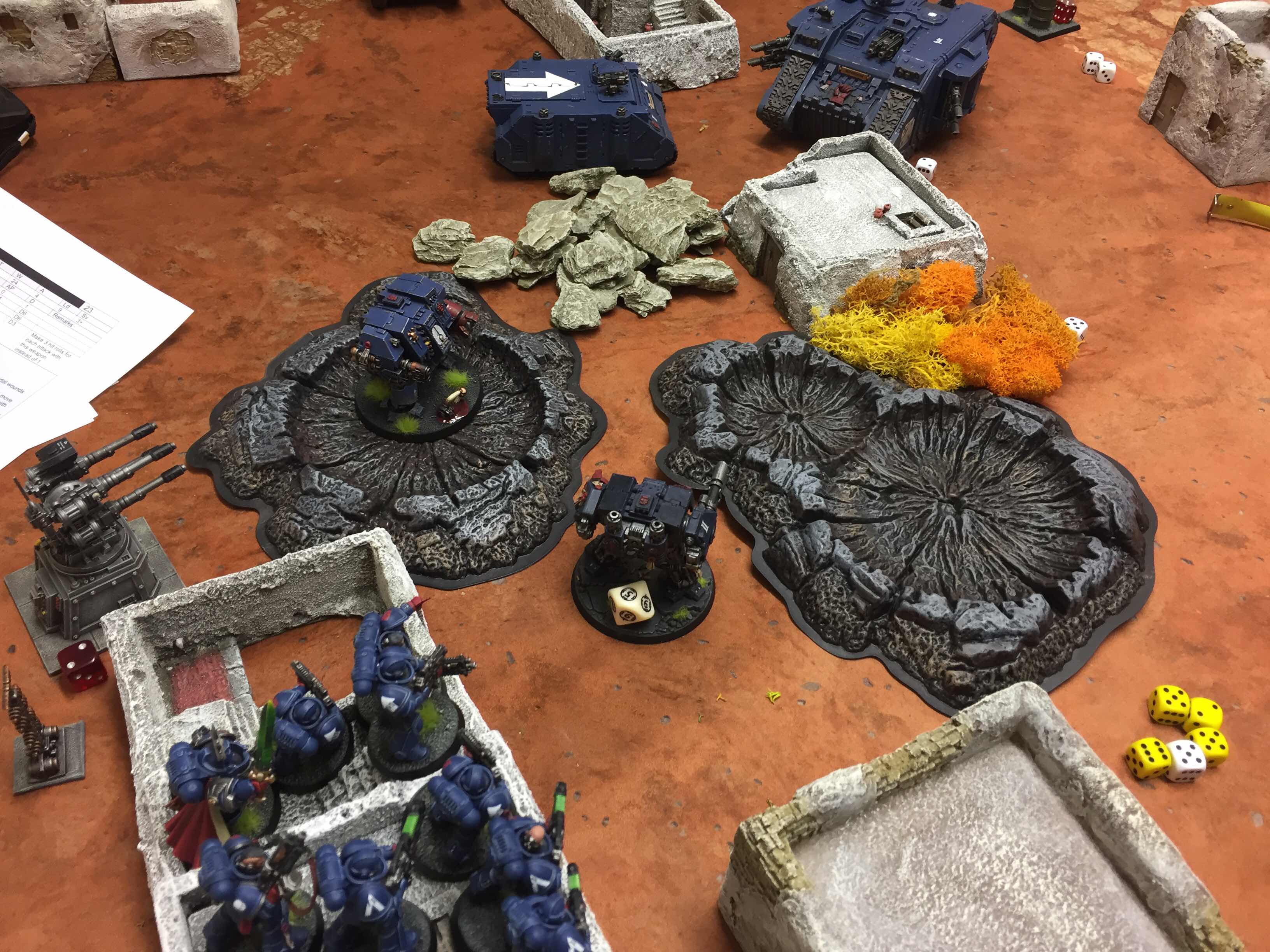 ... And by the end of turn two both Knights had disappeared in blinding nuclear explosions that left giant craters and wounded everyone else nearby. 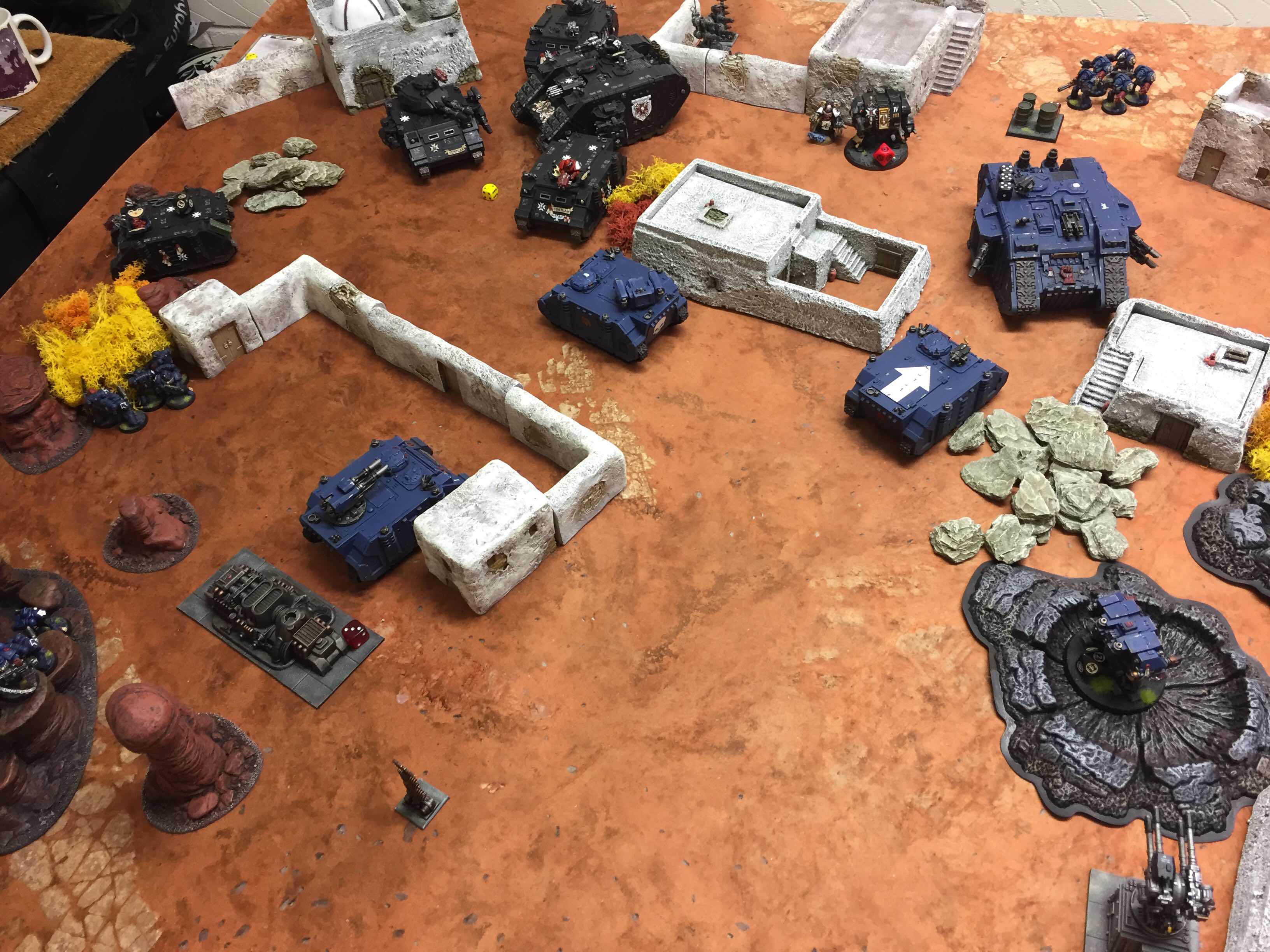 With the Knights swiftly eliminated we could now focus on our actual objectives and both sides saw a large concentration of armour move to the left flank of the table to either challenge or contest key landmarks. 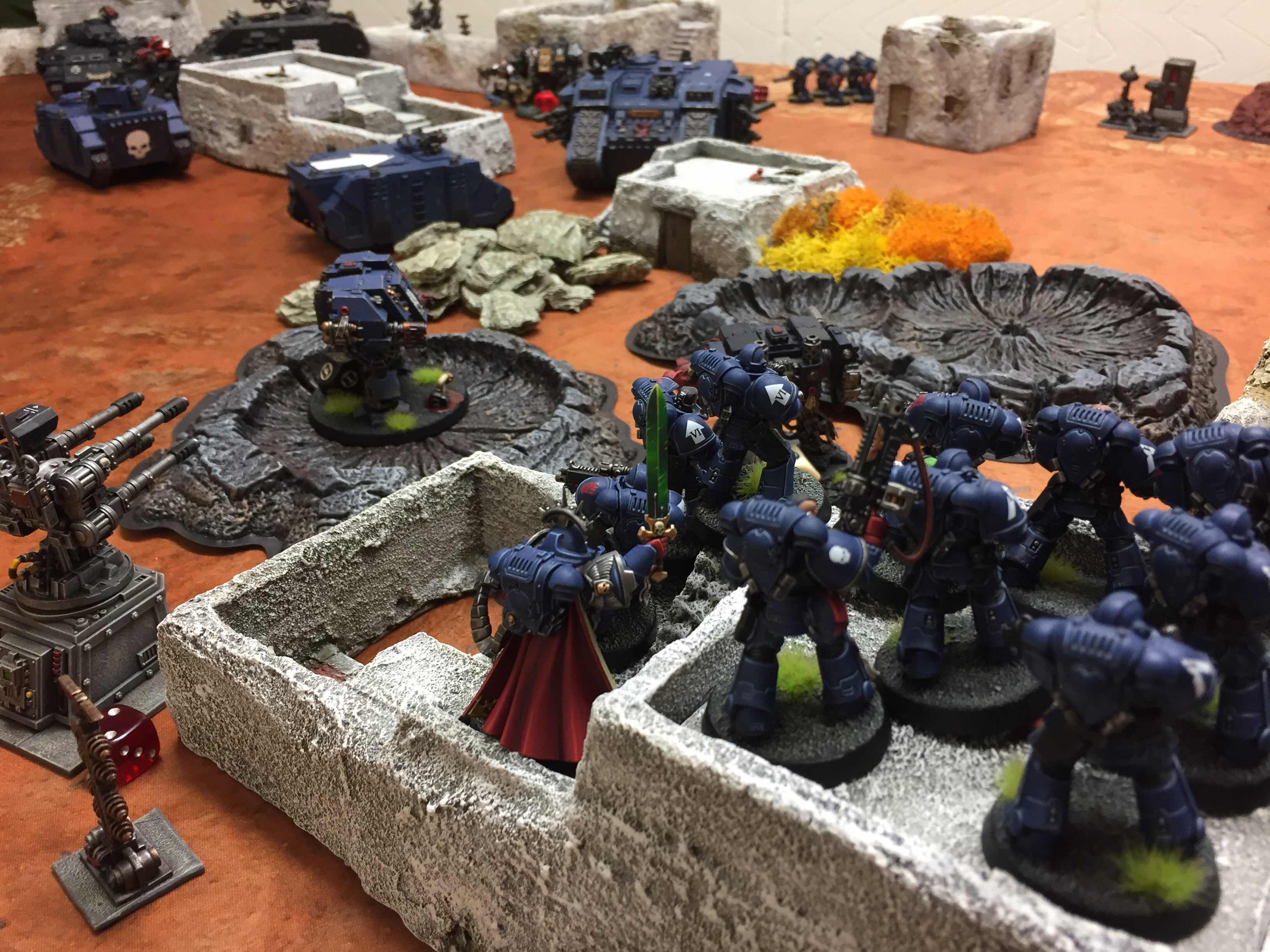 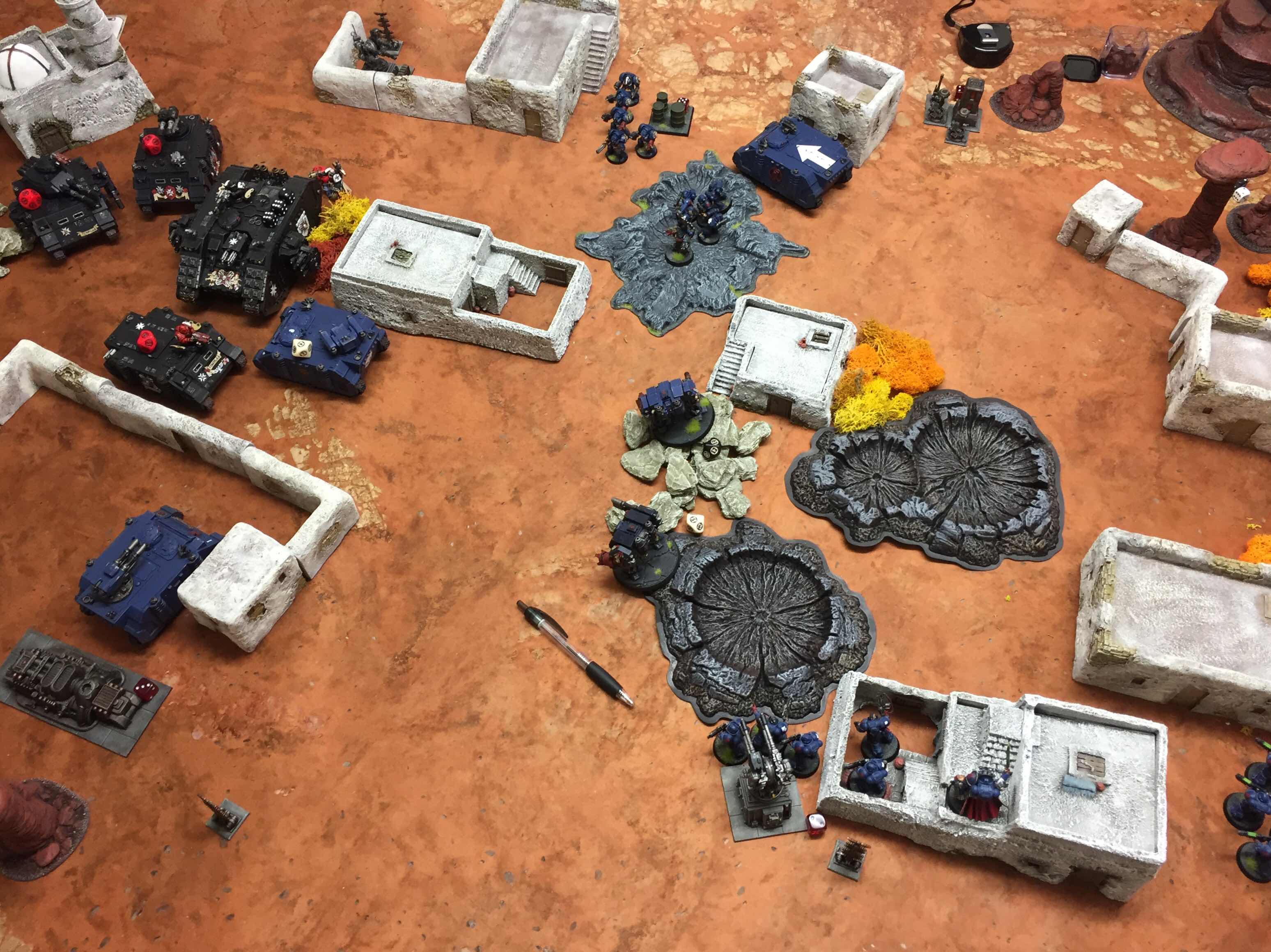 The trick with a game that uses tactical objectives is to try and keep some deep striking-esque forces in reserve for deployment at exactly the right time whether that be to capture an objective or slay an enemy commander.

If you deploy these forces too early you will have deprived yourself of a key asset, but if you leave it too late then you potentially waste the extensive combat capabilities and points value of an expensive unit. As you can see above my Terminators teleported in at just the right time to seize an objective that had been generated by my card deck. 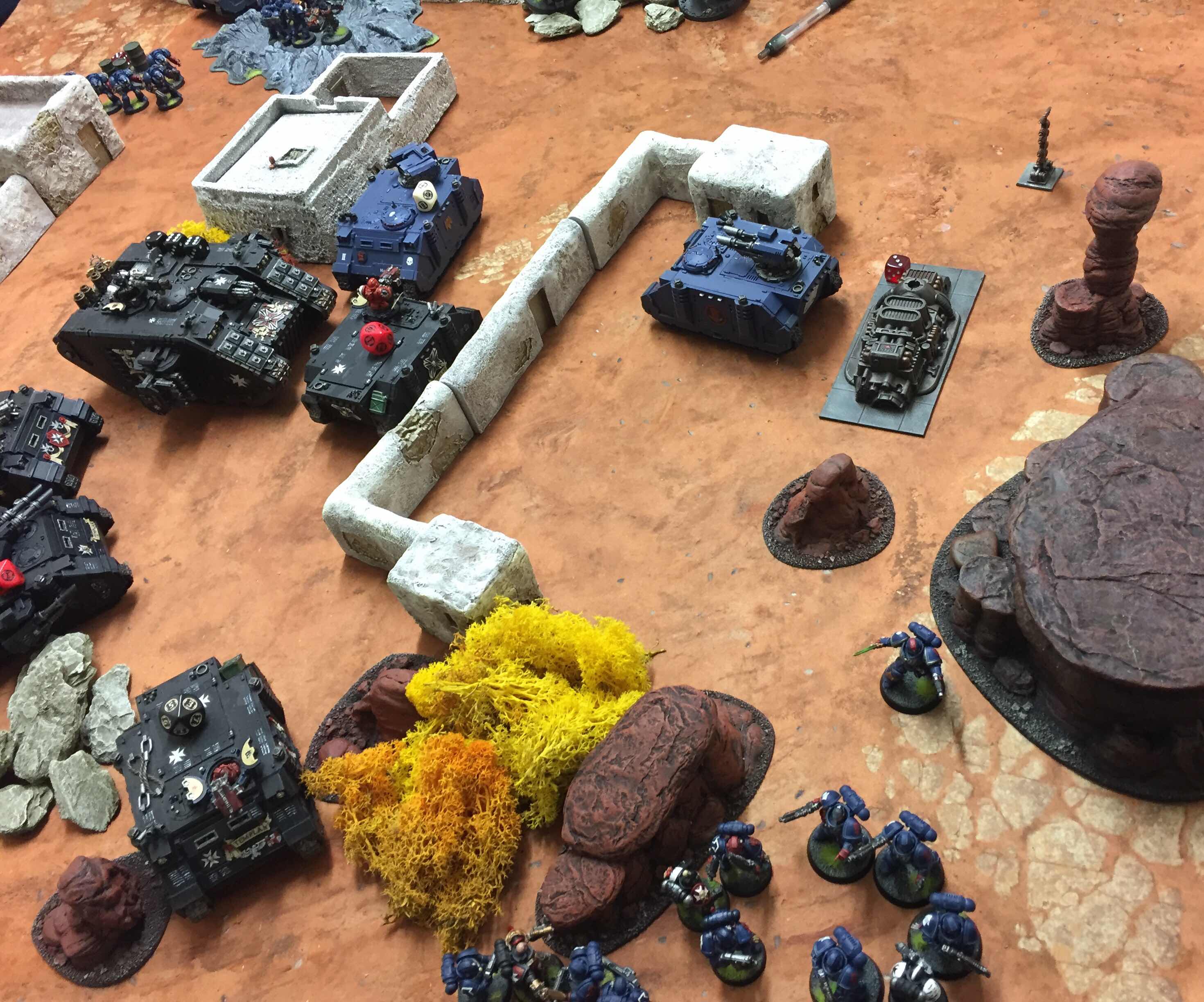 The left flank continued to draw troops to it and became the focus of both sides bulk of forces. The infantry found themselves crawling through the streets and rocky plateaus to engage each other whilst the tanks fought an intense battle in the open plains nearby. As the final reserve units were committed and the APC's disgorged their occupants the battle became progressively more bloody with intense melees and short ranged firefights accounting for many noble Space Marines. 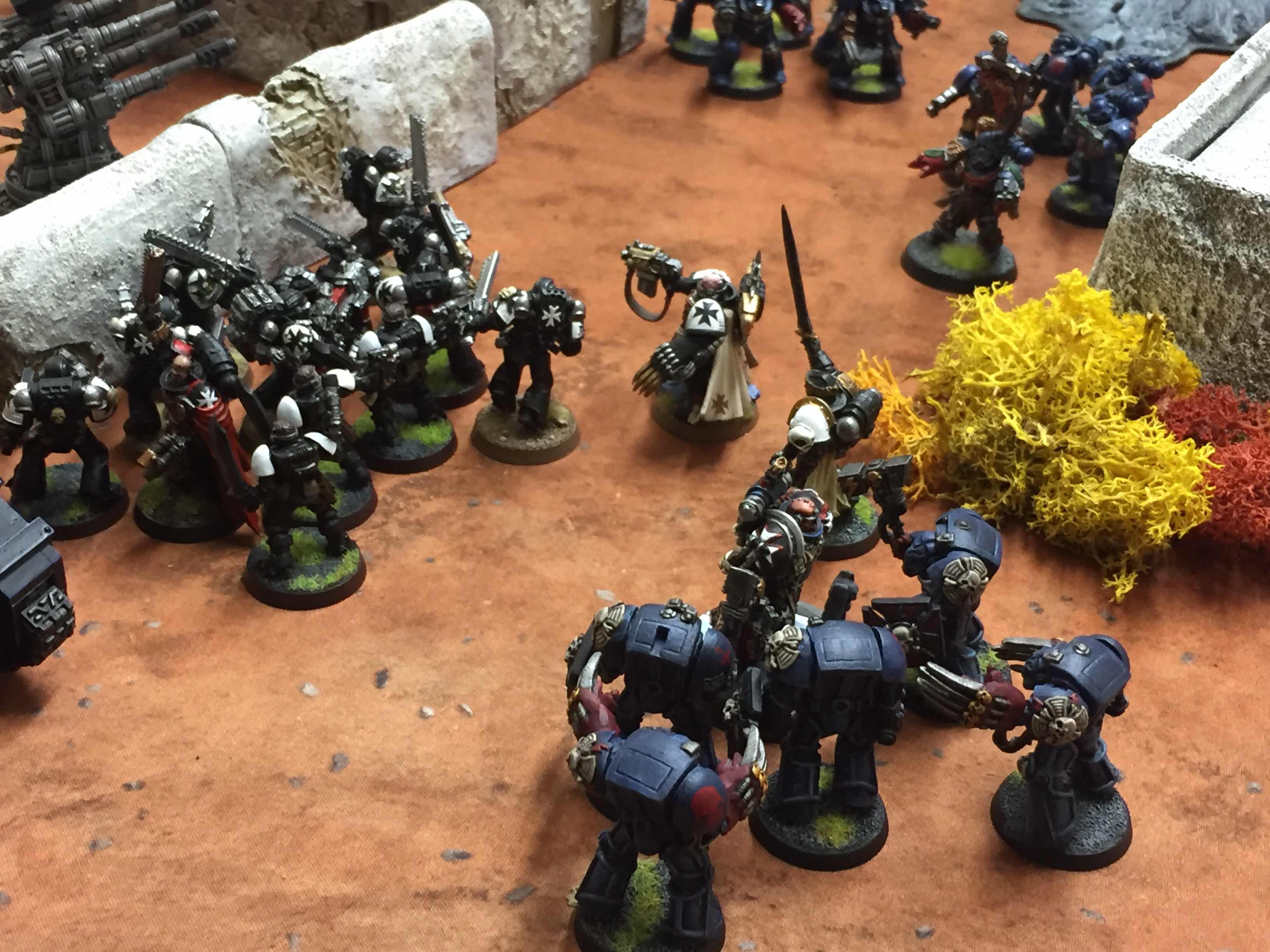 A Squad of Assault Terminators teleported in from the Crimson Fists orbiting battle barge and luckily rolled a healthy ten inches for their charge distance... thereby allowing them to get to grips with Helbrecht and start stripping wounds of the stalwart hero. 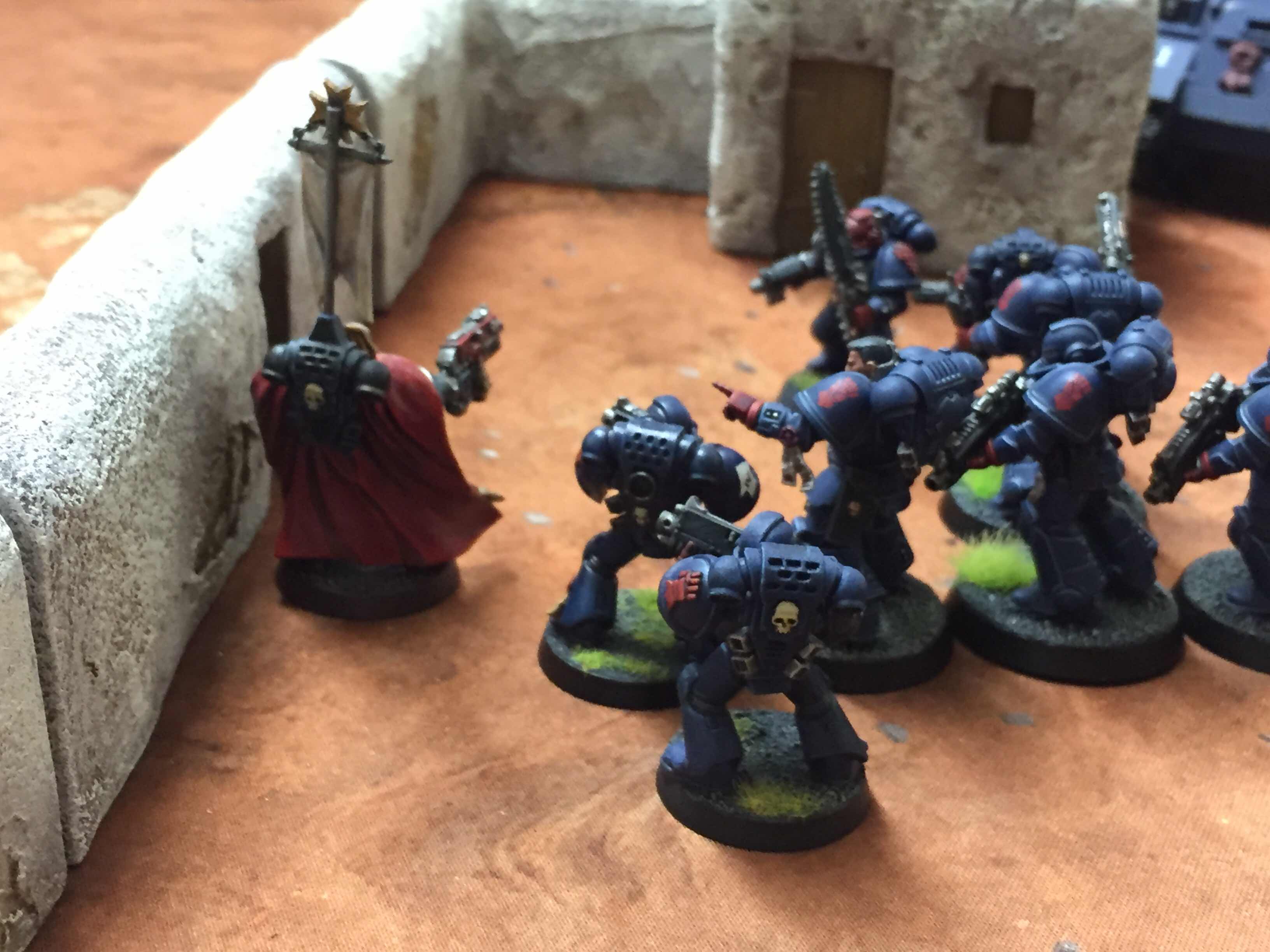 Meanwhile a lone Black Templar Lieutenant is mobbed by a combined force of Intercessors and Tactical Marines... the fight is short, bloody and entirely one sided. 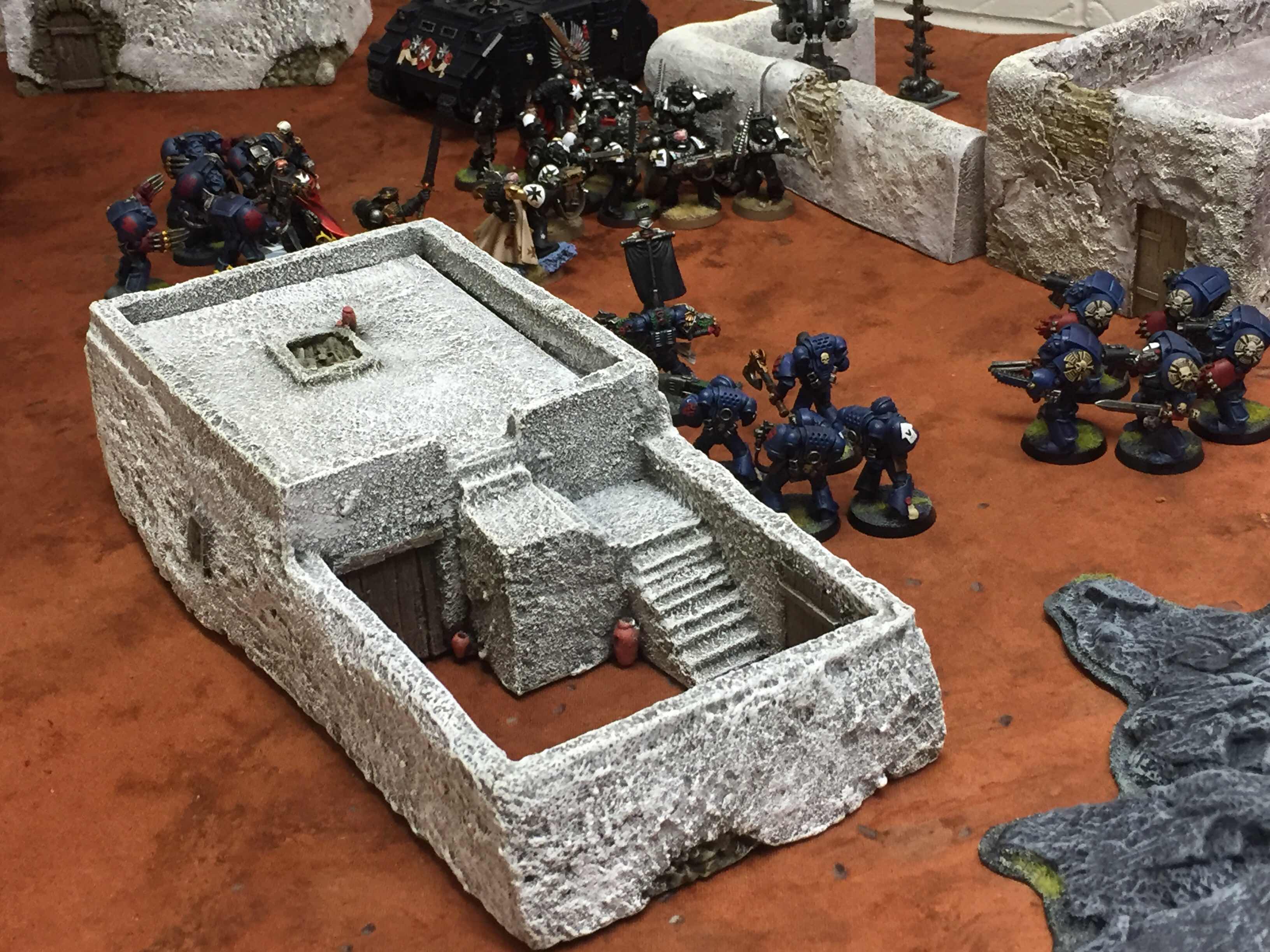 Due to time constraints we had to end the game on the fourth turn and as you can see from the above picture there was still a lot to play for. However with the nagging of wives occurring all of us are aware that even the bravest Space Marine Commander is forced to concede defeat and tidy up their toys. So with the game being declared over it was apparent victory would depend on a very close set of Victory Points.

The Black Templars had scored an excellent six VPs through achieving five objectives and drawing First Blood!! However the Crimson Fists had managed at the last minute to score a total of eight VP's through a combination of fulfilling seven objectives and achieving Linebreaker!

It looks like the scions of Rynn's World have earned the right to recruit from this new planet!! Well until the rest of Helbrecht's Crusade Fleet turns up at least!

Well that was awesome fun! I had a great time and it is nice to break out the Knights for a battle occasionally as they are such cool models!! I really do love 8th Edition... it feels like playing 2nd Edition but without the unnecessarily complicated bits! I'm a big fan... and the good news is I think this game reignited my mate's spark for the hobby as he left muttering something about 'buying the codex!' That's a double win!!
Posted by LegioCustodes at 14:18