You may have noticed that I have been absent for some time from regular blogging activities! Please accept my sincere apologies, this absence has been caused because I have had a number of modelling projects on the go that I wanted to finish before I posted about them. Ergo what you see above is the culmination of one of these efforts.

As I have mentioned previously I have been wanting to start a Forge World Horus Heresy Army for some time but have been dithering over which Legion to choose. However back in November I finally made a choice and decided to break out the mountains of resin that had been piling up for birthdays and Xmas (many thanks to my supportive girlfriend and best mate for the generous gifts!) I had finally decided to go with a Sons of Horus army (this was in no way influenced by the fact that my girlfriend had just read Horus Rising and fallen in love with the heroic Captain Garviel Loken of that very legion)!

I decided I wanted to go for a loyalist Sons of Horus force from the period where they had only just recently changed to their new colours after the renaming of the original Luna Wolves. As such I wanted to go for the lighter 'Sea Green' scheme seen as in Index Astartes from the early 2000's:

As opposed to the far darker 'Metallic Green' that Forge World's latest imagery alludes to:

With this in mind I quickly skimmed the web for reference material and found some good sources to act as an initial starting point; of particular use was a fairly pale green scheme from the excellent team over at 'Tale of Painters' blog:

Check the above link out; it's really worth it!

After a fair bit of research I decided to mix and match a few of the schemes I had seen in order to achieve the exact finish that I wanted, borrowing and discarding ideas and techniques as necessary.

First up I had to decide which models I wanted to paint, the first squad would obviously be a tactical squad as they are the cornerstone of a Legion forces, but the question was what armour variant should my brave marines be clad in. Now I have to admit that I like all Horus Heresy marks of power armour having fell in love with Jes Goodwin's initial sculpts way back in 1990; MkIV Maximus armour looks lethal and efficient, MkVI Corvus armour is so sleek and nostalgic, MkVHeresy armour is so...well bobbly! But in the end I decided to go for a squad of MkIII Iron Armour troops...it's appearance is just so brutal compared to the rest!

With the armour variant decided I then set about assembling the models before giving them my usual chaos black undercoat: 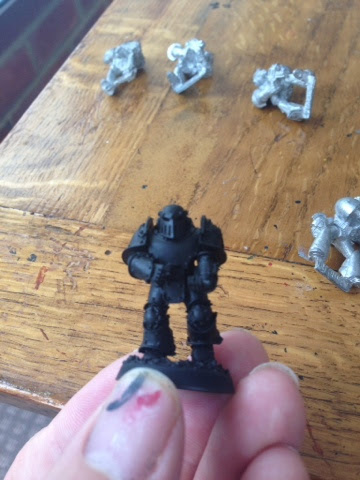 Whilst assembling the squad I decided that I wanted to include a bit of variation within the unit and so swapped in some GW bits to mix things up. Therefore the predominantly Forge World squad does contain numerous components from the Grey Knights; Black Templars and Chaos Space Marine ranges. It's these little touches that really personalise a force and give the troops a sense of personality.

Once the undercoat was dry I basecoated the unit in Waaagh Flesh (by hand though I suppose an airbrush would be quicker).... 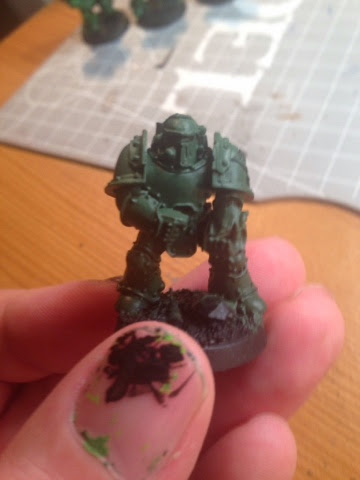 This was gradually blended with up Warboss Green and Lahiam Medium in order to leave a degree of natural shading in place: 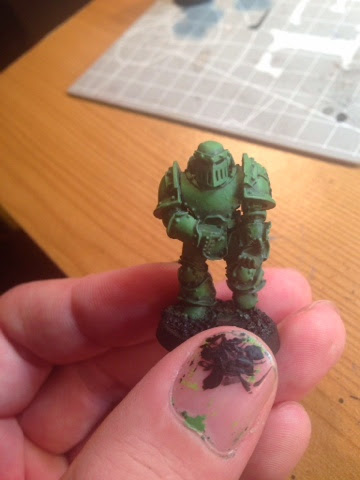 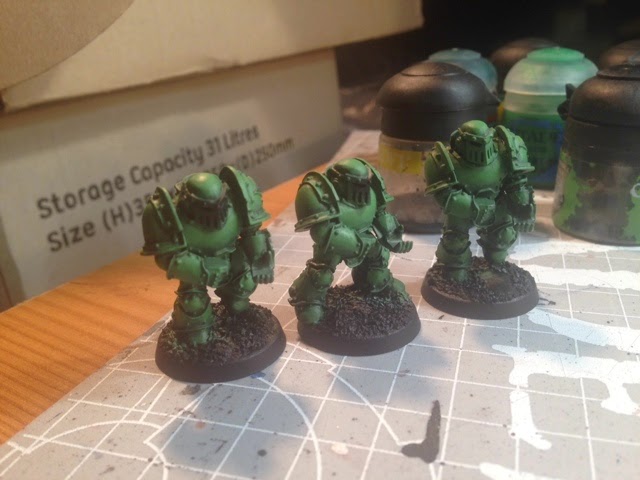 And I followed this step again with but with Sybarite Green: 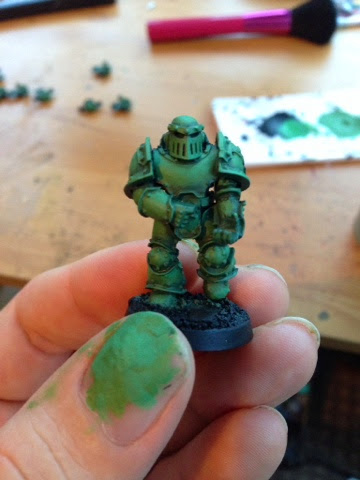 Once the layering was done I applied final edge highlights in Nurgling Green; it was at this point I began to hate forge world designers for sculpting bolts on everything...hundreds of the little bastards are a nightmare to highlight!!

Now with the 8,000,000 layers of green done (on my thumbnail as well as the models apparently) I cracked on with blacking out the areas of the model that weren't going to be the same colour as the power armour.

Being a wise sort of chap I had used FW's sculpted shoulder pads for the legion icon and so these were blacked out and painted accordingly. The red here was Khorne Red, blended through Mephitson Red all the way to Wild Rider Red (with a final tiny dot of white in the corner). The gold areas was achieved by a liberal base coat of Balthasar Gold, layered with Gehennas Gold, washed with Agrax Earthshade and finally highlighted with Runefang: 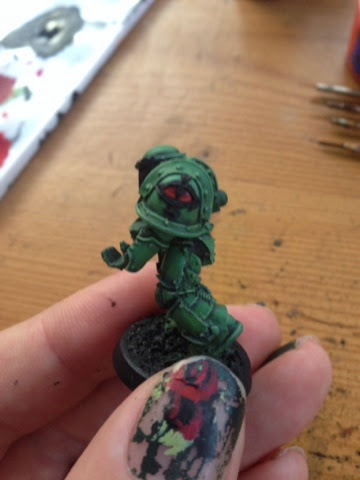 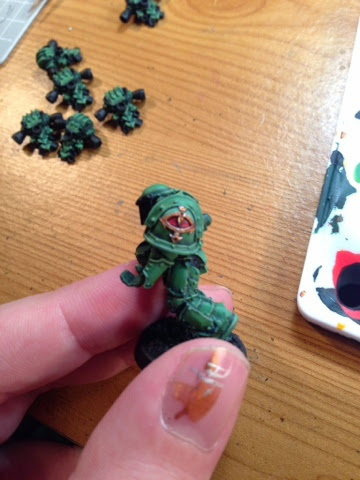 Steel areas were painted with Leadbelcher; washed with Agrax Earthshade and highlighted with Runefang: 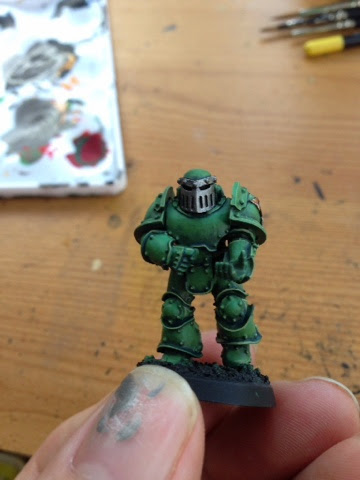 I took a bit more time over the sergeant, giving him a scarlet power fist (same method as the eye of Horus chapter symbol) and a much darker red helmet plume which was achieved by an additional wash of Agrax Earthshade before individually highlighting every individual bloody plume in three different shades of red...wow! 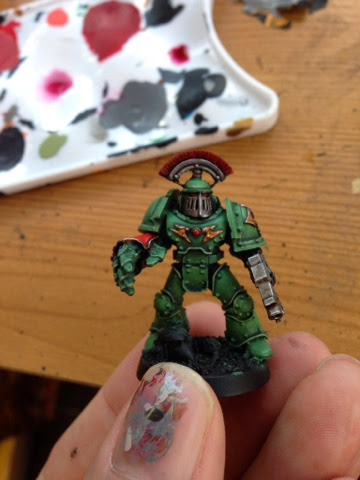 I painted the bolters separately for ease of painting before attaching them to the model; the metal on these were painted using the same techniques as described earlier whilst the black bolter casings were edge highlighted with Dawnstone:

I then completed the squad standard (vexilius) and comms set for the nuncio-vox, I felt that the original resin aerial for the vox was too flimsy so I snapped it off and replaced it with a sewing pin which I drilled in place for added durability. 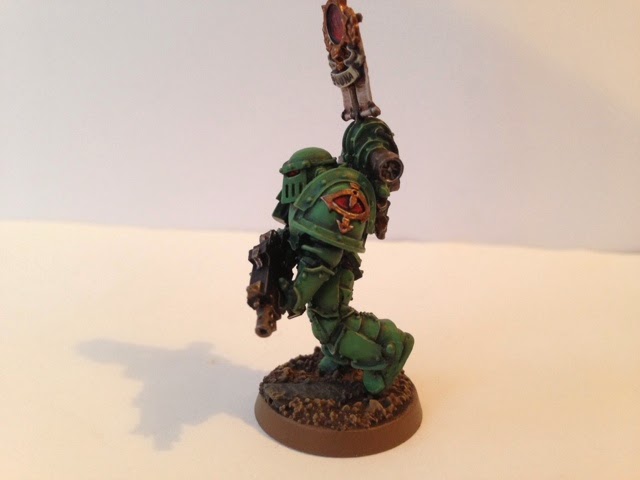 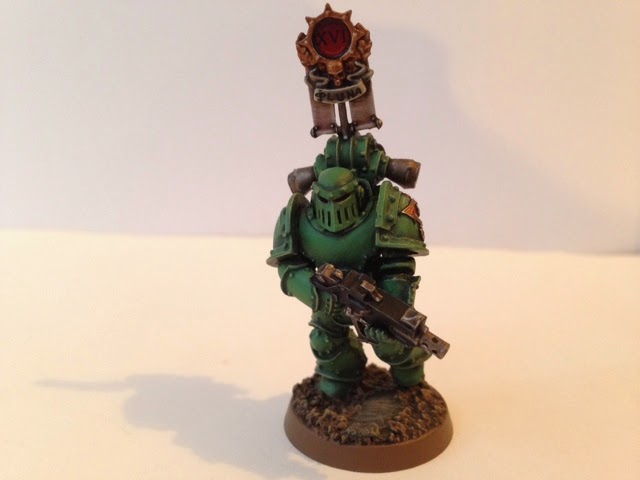 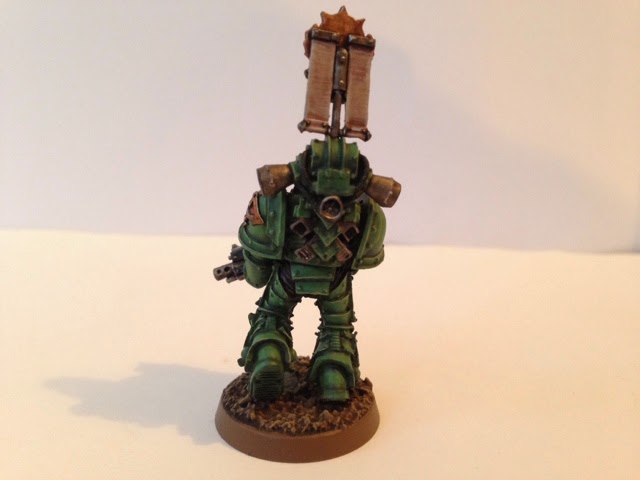 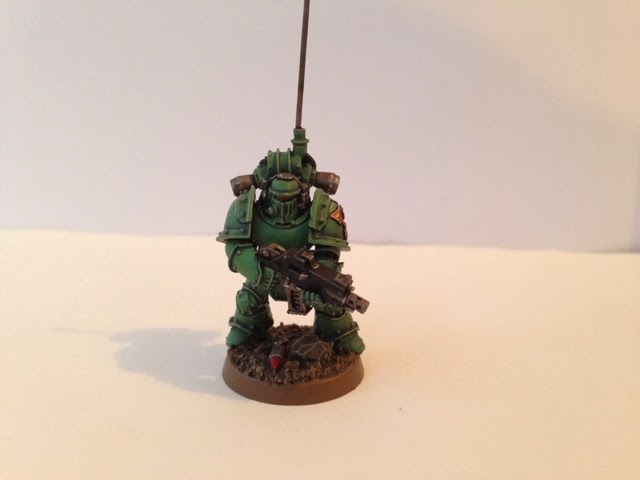 I then added a few transfers to finish off the models, these were taken from FW's Sons of Horus and Space Marine Transfer sheets and were applied using a mixture of Micro Sol and Micro Set for best effect. 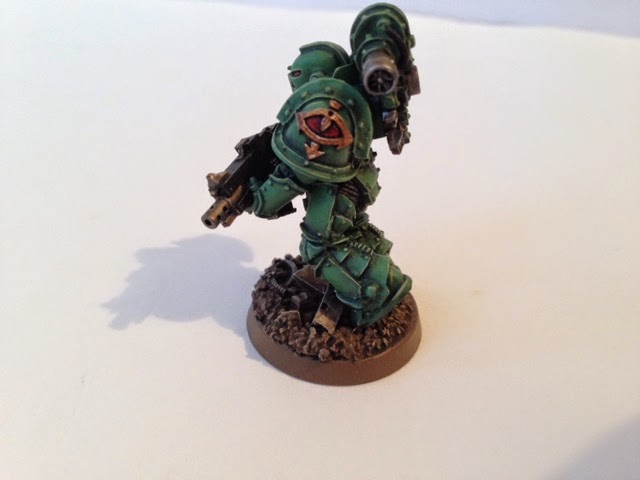 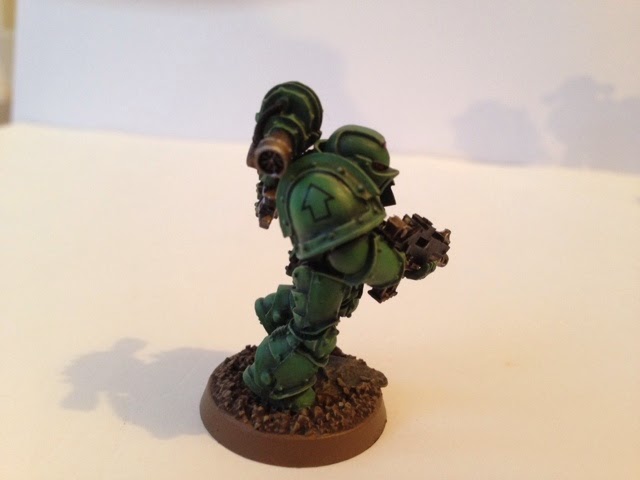 As you can see these transfers really complement the model, giving the unit a degree coherency albeit in an understated way. 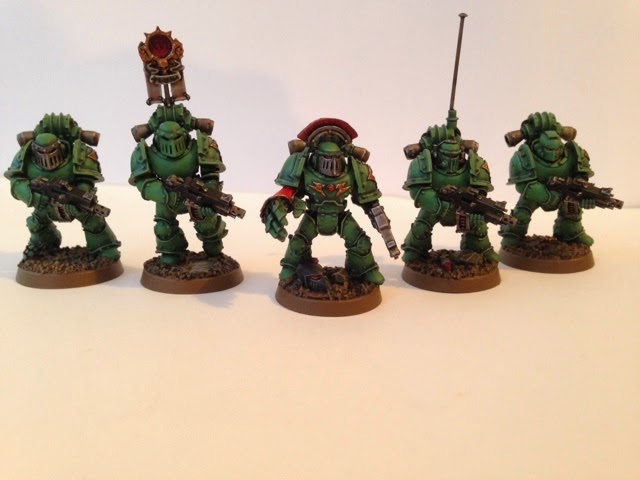 And that ladies and gentleman has been my Sons of Horus project (with a free tutorial no less!) I hope you have enjoyed it, and that it may be of some use for those of you wishing to join the Warmaster's own legion.

Overall I am really, really happy with how this unit has turned out and the green is exactly the shade I wanted. These FW models whilst not strictly Oldhammer are great fun to paint and are very close to Jes's original concept models from over 20 years ago.

I have definitely been bitten by the 30k bug and as such I think my next endeavour will be to increase this unit by a further ten tactical marines to a full twenty man squad (legion rules).  As ever I will let you know how this goes!