Greetings one and all;

Apologies for the long break in transmission since my last post; I have been remiss in my duties as a keen retro gamer!

I have in fact been on a course with the Army which has limited my access to the world wide web; so really it's not my fault.

On the bright side though while I was away there wasn't a whole lot to do in the evenings so it gave me the opportunity to get some one-on-one painting time with some old school miniatures.

A few months ago I played a couple of games of 40K second ed with two of my best friends (one from the Army and the other is now in the Royal Navy and it just so happened that we were all on leave at the same time).  Anyway during these games both of my opponents deployed squads of Assault Terminators which presently ran amok in my lines and killed everything they encountered take nearly no damage in return... be warned Storm Shields and Terminator Armour is a bithcin' combo!

Well after I finished crying and punching the wall I was motivated to field some of these monsters myself.  My chums had used the new modern era Termies, but in true retro style I managed to dig out some original second ed assault terminators, I stripped off their old paint job and then set to work sprucing them up ready for our next 1990's style battle.

My main army is actually Crimson Fists (an entire battle company plus) so I decided to paint these guys as Rogal Dorn's bluest sons! The results are below: 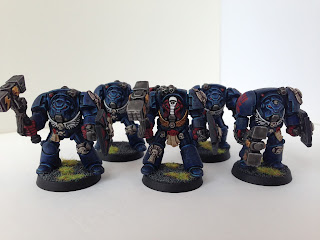 This is the complete Squad painted up and ready to go.  Three thunder hammers/storm shields should be enough to soak up some punishment from all but the heaviest weapons; plus there are two guys with lightning claws to shred all and sundry to pieces in a whirlwind of blades once the distance has been closed! 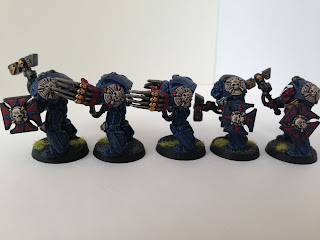 And here we have the complete squad in a conga style line a la Space Hulk deployment (which incidentally is another one of my favourtite games that they are likely to find themselves deployed in; after all it would be a shame not to put those close combat weapons to use in destroying the Genestealer menace - 1989 first edition rules only; of course). 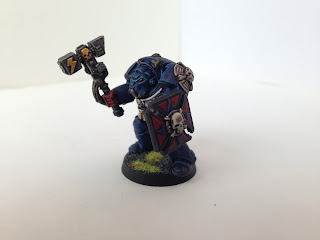 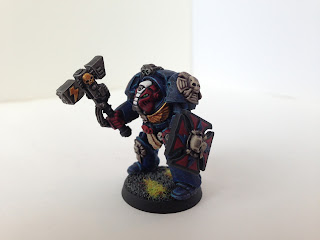 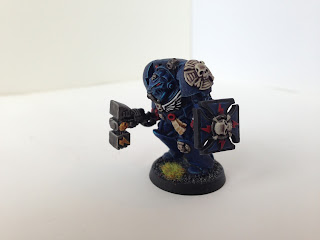 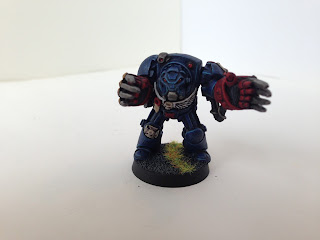 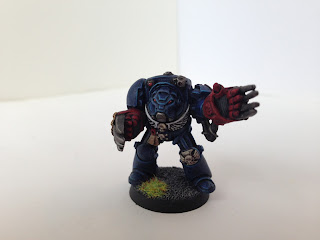 Above is a close up of each of the individual members of the squad in all their glory.

The one issue with the old school models compared to their more modern counterparts is that due to the limited amount of variation with each miniature there is a tendency for them to end up all looking a bit similar; however I have found that the way to get around this problem is by injecting some differences via the art work on their shoulder pads.  Terminator shoulders are lovely big areas which allow me the chance to try out a bit of free hand artwork as follows: 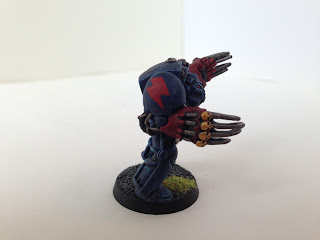 I chose a lightning bolt for this chap as it seems to be a recurring theme with assault terminators and also he is equipped with lightning claws! 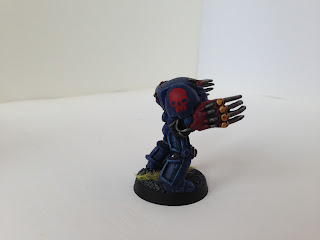 This fellow got a skull as the world of 40k is full of them and I also really enjoy painting them! 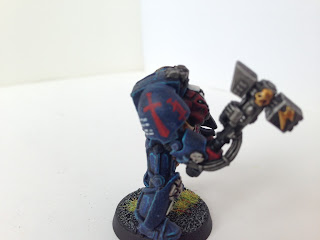 The squad Sergeant got a sword as he is an assault terminator and it seemed appropriate; I was going to add wings; but then I thought it would look a little too Death Wing so I went for a stylised '1' (for the first company) and some free hand script. 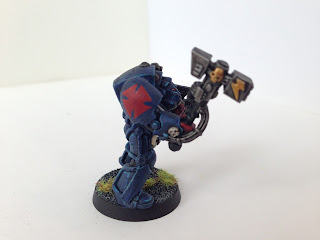 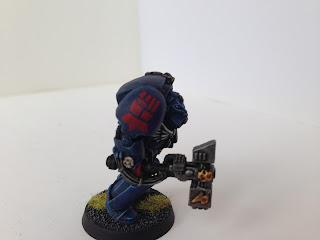 Finally I thought at least one member of the squad should bear the chapter iconography of the Crimson Fists and so this bloke got a nice big red gauntlet.

Well that's it for this time guys; I promise not to leave it so long between posts next time!! Stay safe; and remember; the Emperor Protects!!

Posted by LegioCustodes at 04:34 2 comments: