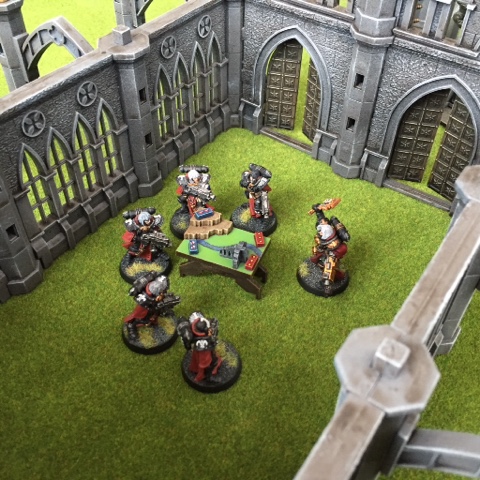 At the start of the battle the senior Battle Sister, Sister Superior Scwarzenegger is huddled around a briefing table deep in the convent, working out a plan of action with her own retinue of battle hardened Sororitas warriors... 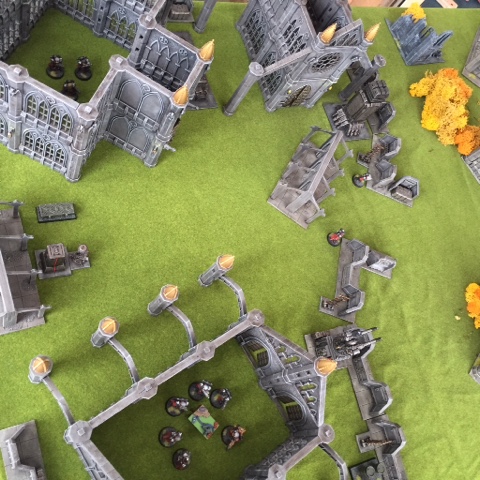 ...Whist the remainder of her troops are scattered around the facility in small groups of two or three warriors. 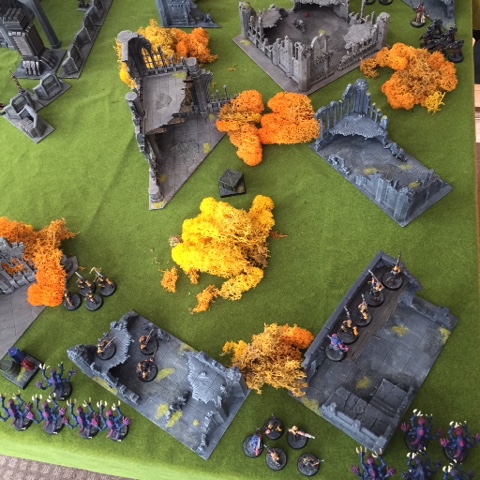 Meanwhile a vast swarm of brood brothers, hybrids and purestrain Genestealers creep through the overgrown ruins of a nearby township. In the far distance Inquisitor Athena and her elite Storm Troopers advance from the approaching flank. 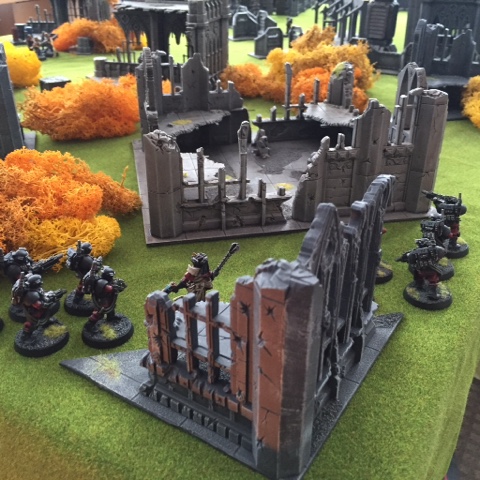 Athena's relief force consists of herself and two squads of six Inquisitorial Storm Troopers who quickly fan out and start pushing towards the Battle Sister's outpost. They move wearily through the undergrowth, conscious that an ambush could occur at any moment. 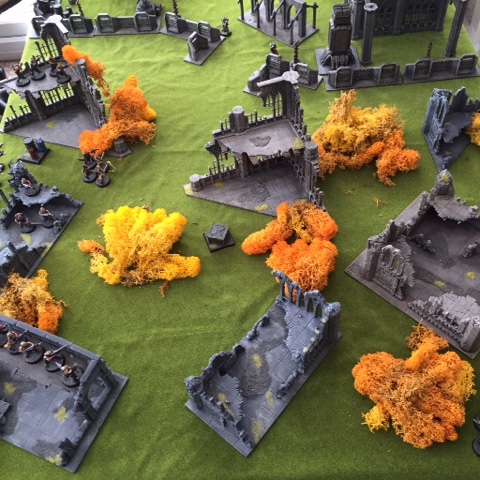 The terrain directly in front of the Preceptory is packed with ruins and scrub which block line of sight and provide ample cover for any attackers...something that the fast moving purestrains will soon ustilise to best effect. 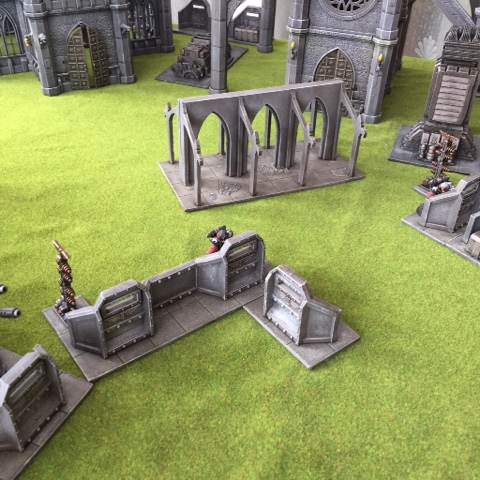 Within the armoured walls of the facility two Battle Sisters sentries keep vigil on the front entrance in order repel any potential attackers and buy their brethren sufficient time to form an effective counter attack. 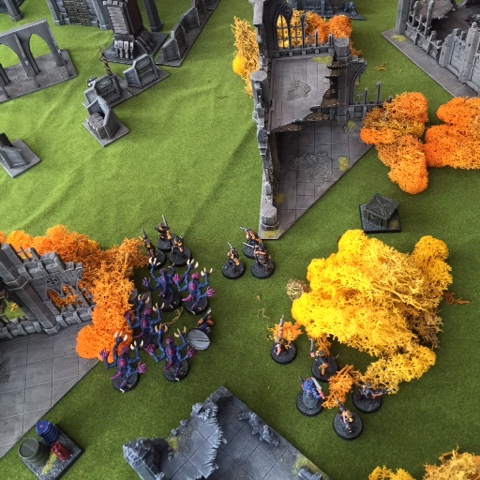 Almost instantly the xenos forces move hard and fast towards the inviting entrance to the Preceptory. As fits their callous nature the Genestealers happily push the brood brothers in front of their advance. This wall of brainwashed humans works as a highly effective meat shield and they absorb the volley of bullets that were intended for the Genestealers. 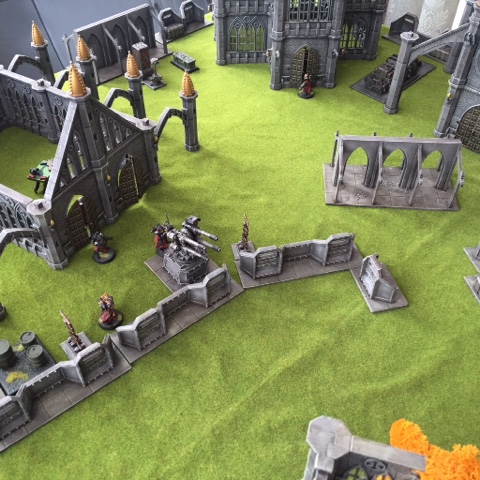 As befits an elite military unit the Sisters react quickly to the developing situation and sally forth from their buildings in order to do battle with the alien abominations assailing their walls. 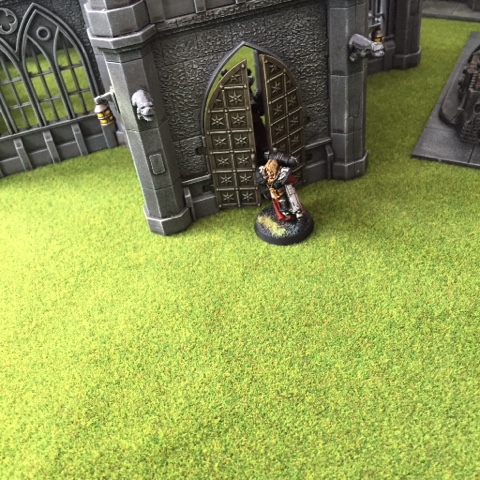 However the humans are only able to move a relatively short distance compared to the nimble 'stealers which puts them at a real risk of being outmaneuvered and overrun before they can form an effective counter-punch. 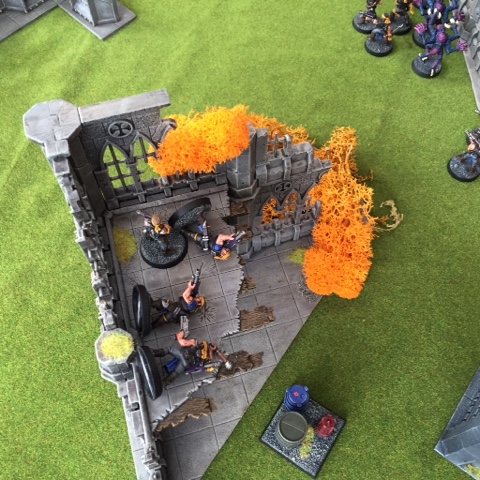 Luckily the powerful boltgun which forms the standard armament of the Sisterhood is a potent weapon and so their combined volleys slice through the bodies of the brood brothers like a scythe through ripened wheat. 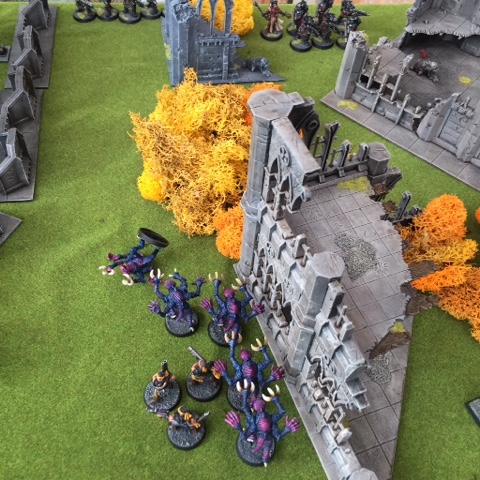 On the other flank Athena has her Storm Trooper squads form a firing line and prepare themselves to receive a charge from a second wave of purestrains. Unfortunately the meager las-rifle is nowhere near as potent as the mighty bolter and so they inflict no damage on their approaching foe.

Thankfully Inquisitor Athena is a prodigious psyker and manages to generate a powerful mental bolt that shreds the flesh of one of the purestrains; it's body is entirely shattered by the ethereal power of the Immaterium. 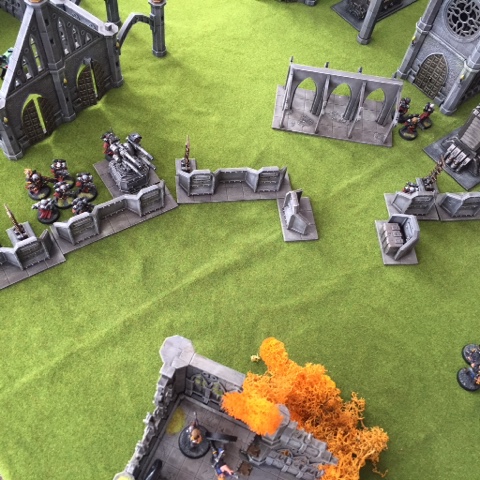 Within the Preceptory the Battle Sisters move their forces to activate the powerful quad linked stub-cannon that forms their primary line of defence against any intrusions into their sanctum.If they can get this mighty weapon working it could be enough to turn the tide in their favour. But it is a cantankerous, complicated weapon system that will require a successful check on an intelligence test each time it is fired. 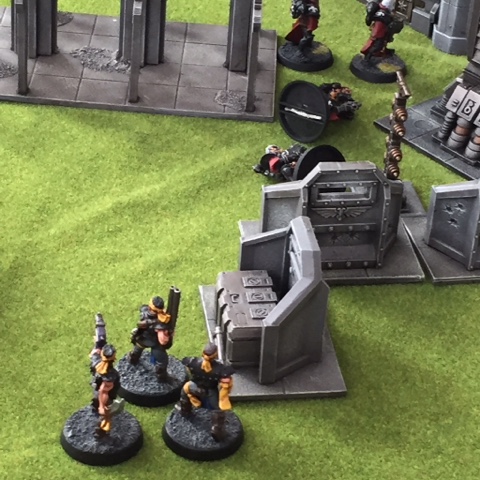 Despite their lack of training and basic level of equipment the brood brothers are able to mount a successful forlorn hope against the compound's main entrance. The Sisters are horrified as bursts of shotgun fire cut them down... I guess next time they'll wear helmets! 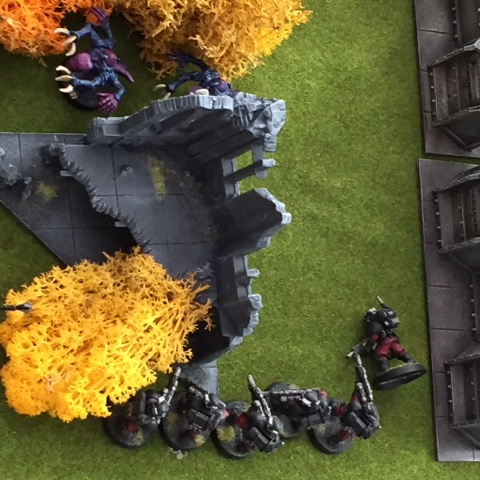 The Inquisitor's relief force now finds itself in dire trouble as the Genestealers have gotten perilously close to their position. These veteran soldiers know that this particular strain of xenos is a peerless combatant in melee warfare and that they will struggle to survive a close combat struggle.... 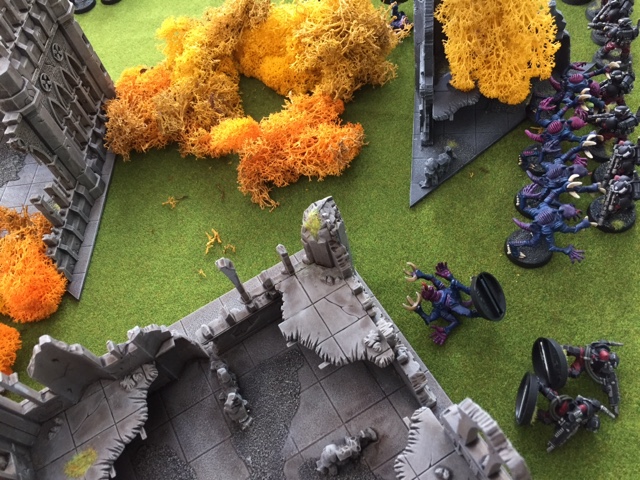 This fact plays heavily on their minds a few seconds later as a tidal wave of claws and teeth smashes into their position, shredding through armour and flesh with ease. 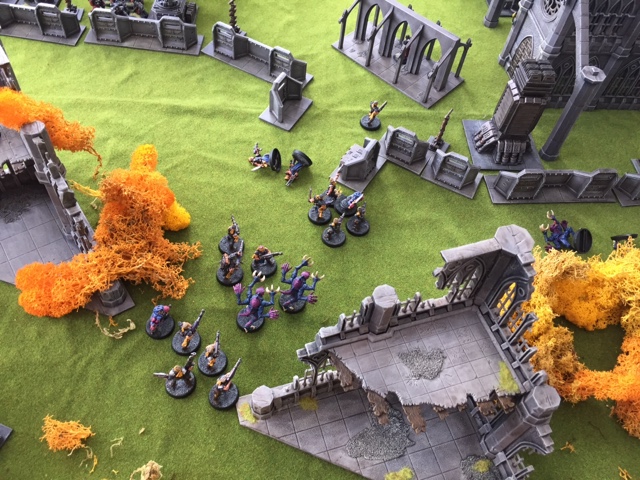 With the Inquisitor's relief force now fixed in place and unable to provide effective support the remainder of the alien army takes full advantage of this and pours towards the Preceptory's entrance hoping to exploit the initial gains made by the brood brothers last turn. 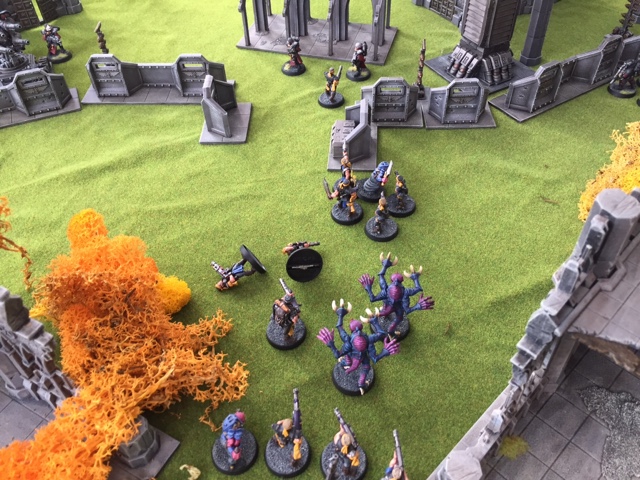 However they are met by fearsome volleys of disciplined bolter fire which starts to dramatically thin their numbers, luckily as all Genestealer forces are immune to psychology this means that they are not fazed by the wanton butchery of their brothers. 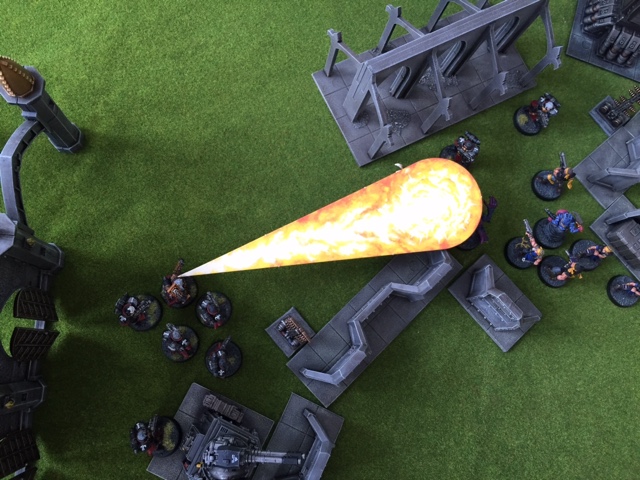 As the distance between the two forces decreases the Sisters are able to bring their more potent close range weaponry to bear and so Sister Schwarzenegger lets rip with her combi-flamer, immolating a number of the aliens in one burst. 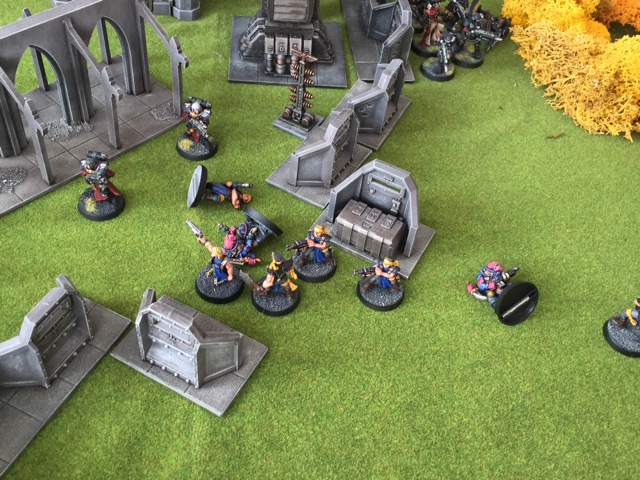 Finally the survivors of the relief force manage to close with the facility and begin to move along the external wall line in order to support the Sisters who continue to lay down fire with their bolters and flamers. 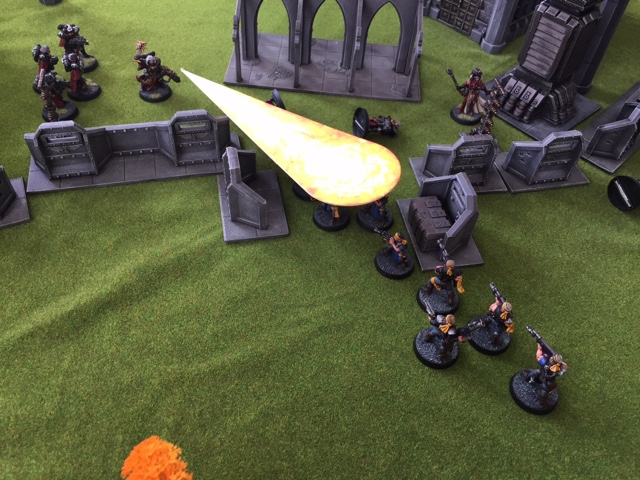 The carnage starts to increase exponentially and within moments the floor around the external wall is slick with the blood of human and alien alike. 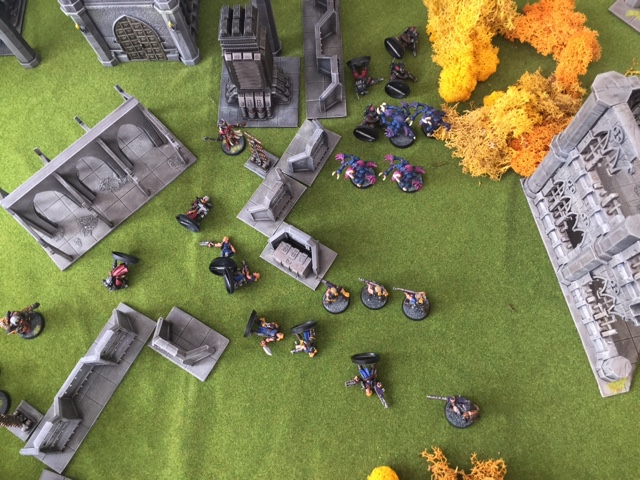 The brood brothers bear the brunt of the wounds on the alien side whilst on the Imperial side it is the brave Storm Troopers that are exterminated in short order.

The gateway to the compound becomes the crux of this skirmish as both sides realise that it is the vital ground that holds the key to victory. 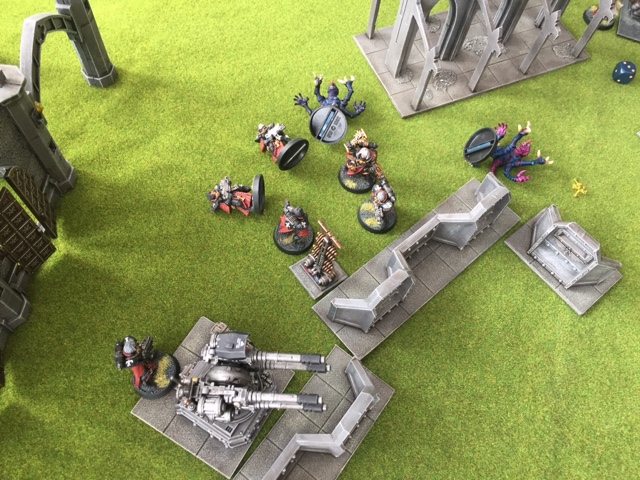 With this in mind both forces redouble their efforts and push hard at each other in order to gain some form of upper hand in a battle that has now become a grinding war of attrition. The air is thick with gunsmoke and the stench of burning flesh as the final genestealer falls down dead, its brain shattered by the power of Athena's psychic prowess!

Athena surveyed the battlefield as she scraped the remains of eviscerated alien from her baroque armour. It had been a brutal fight, one of the most brutal she had ever fought in and she had only survived by drawing on her deepest reserves of faith and hatred. Nonetheless she remained alive and the foe was dead which at the end of the day was all that she could hope for.

Her victory had been a Pyrrhic one, for she had come here looking for troops to augment her forces but had ended up losing more soldiers than she had gained. Her train of thought was broken by the sound of footfalls approaching her position, she spun around to see two of the Battle Sisters approaching her; walking in between them were two of the Storm Troopers she had believed dead.

The two men were devoid of their helmets and looked dazed as they stumbled alongside the Sororitas whose power armour hummed vigorously with each step. The small party halted a few steps from Athena and one of the female warriors spoke, her voice distorted by the vox grille built into her Sabbat-pattern helmet.
'Inquisitor. We found these two alive outside the walls surrounded by alien bodies. They seem to be in a state of shock, but are otherwise unharmed.'

Athena nodded her thanks to the Sister who had spoken before turning her scrutiny on her men; she noted that their eyes were glazed and that they seemed unable to focus on her. In one fluid movement her plasma pistol was drawn from her holster and two incandescent balls of white energy removed the Storm Troopers' heads, a moment later their corpses clattered to the ground.

The Battle Sisters stood stock still, neither passing comment nor moving to interfere with the Inquisitor's actions. The Inquisitor re-holstered her smoking weapon before addressing the Sisters, 'Come, let me tell you of the foe we face...and why we cannot afford one moment of laxity in the fight to come!'


Wow! What a fantastic battle this was!! The whole skirmish was hard fought and bitterly contested right up until the last roll of the dice. The two forces couldn't be more diametrically opposed with the fast moving, close combat monsters of the xenos facing off against the slower but more heavily armoured forces of the Imperium.

We both really enjoyed this game and there were loads of moments where the whole thing could have gone either way which makes for a tense, fun encounter! Personally I am really growing to love the Rogue Trader psionic rules which as I've said before are probably the most balanced of any iteration of Warhammer 40,000. I am also taking great pleasure in learning to fight and play with a Genestealer Army as it is such a challenging but fun force to command!

As an aside it was great to use the excellent new Pegasus Gothic Scenery that I had constructed and assembled just for this mission. I am really satisfied with how it looked on the table top and I have to say it really added to the atmosphere of the game. They are really great bits of terrain and I literally can't praise them enough!

Well....what next for the campaign?? The Inquisitor still needs to thwart the Genestealer menace but every encounter is depleting her finite forces and with reinforcements only arriving sporadically she is going to need to use some cunning tactics and solid resource management to ensure she remains one step ahead of the cultists!

Posted by LegioCustodes at 12:41