He arrived at 0900 hours and we spent the first hour having breakfast and rolling dice as we selected our forces and rolled up their starting stats, all of which were fastidiously recorded on the original Necromunda Gang sheets. This can be quite time intensive... however as I love narrative/RPG style gaming it is perfect for my tastes as I really appreciate the sense of individuality that the gangs and their members possess in Necromunda.


With our forces selected we had a couple of swift test battles to familiarise ourselves with the rules and ease into the swing of things. These were over pretty quickly and my mate realised that investing the majority of your points into a 'Heavy' with a Plasma Cannon early in the campaign is ill-advised and so swapped him out for a cheaper Heavy Stubber which freed up extra points that could be expended on bulking out his gang with extra gangers.


With slightly refined force lists we embarked on the campaign proper and set up our forces for a good-old fashioned 'Gang-Fight'. This was great fun and I was really surprised at how easily the gameplay flowed, the rules are absolutely fantastic and perfectly suited for small squad skirmishes. They are the pinnacle of what GW achieved with the WH40K second edition ruleset. It is amazing how quickly a gang can be forced into taking a bottle test and being routed from the skirmish...which isn't always a bad thing as it can prevent the needless death of your gangers who can be used later on during the campaign.


Given that the first game finished in under an hour we decided we would try and squeeze a few more campaign turns into the day and so set about the in-between battle admin that needs to be undertaken as part of the campaign system.


During this phase most of the Gangers gained some experience and so were able to progress up the skill chart and grow as individuals. However some of those who were injured during the battle died as a result of their wounds...life in the Underhive is brutal, and seemingly quite short.

We then dispatched our gangers to work our territories in order drum up some much needed credits that could then be spent on purchasing better kit and upgrades.


The next battle was a 'Scavengers' game the purpose of which was for the two gangs to seize and control a random number of loot counters that had been scattered around the playing area. Inevitably our troops rushed for these valuable objectives and soon groups of gangers were engaged in vicious short-range firefights around key locations.


Both of us were able to secure a number of loot counters during the opening stages of the encounter, however the Van Saars were able to quickly dominate the battlefield thereby forcing me into a bottle test which I promptly failed. This gave them a big boost both to their income and experience points.


With the games going so quickly we decided to knuckle down and see just how many skirmishes we could actually fit into one day of gaming...

In between each battle we continued to undertake the record-keeping and watch out gangers grow and develop their own unique back-stories. This really is the best bit of Necromunda for me, I love watching my models turn into individuals and then become heroes... like my gang leader who gradually became a formidable warrior, but also suffered an old-head wound that forced him to sit out some battles when it played up.

Additionally it was also very pleasing to watch my lowly Juves mature into fully fledged gangers in their own right. It is very satisfying to watch a low-value Juve blossom into a far more formidable fighter!

Throughout the day we managed to play a total of seven games which must be something of a record, and in fact turned out to be a full campaign in its own right.

One thing that really appealed to me was the need to think strategically during each campaign-turn as there is a real potential to end up winning the battle but losing the war. A good example of this is where one side fights all-out to win the battle...but incurs so many casualties that some poor rolls on the injury chart will cripple his force!

Amusingly my opponent won a 'Raid' game by destroying my water still in the second turn which seemed like a great victory. However this also turned out to be a real boon for me as the battle was so short that none of my gangers were hurt...so all of them could work my territories next turn meaning I had a huge influx of credits which allowed me to expand my force further.

All of the games were great fun and whether we were winning or losing neither of us cared as we were having such a good time. 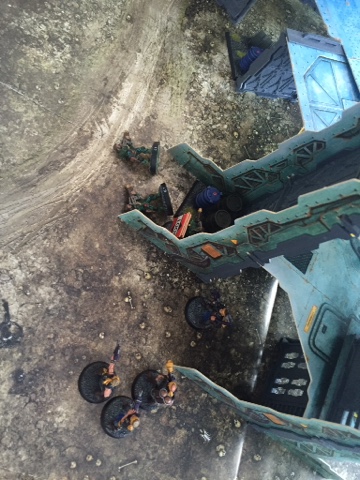 Given the small battle area in these skirmish games it has to be said that template weapons are horrifyingly powerful and both of us suffered incidents where we had foolishly bunched multiple troops into a piece of nearby cover...only to watch a frag grenade land in the middle of the group and cause utter devastation. 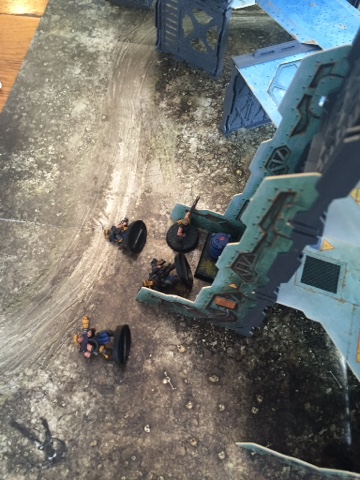 Given that armour is fairly rare in Necromunda it is important to remember that when troops get hit it is highly likely they will be wounded... so effective use of cover, overwatch and hiding are all key considerations to ensure victory. 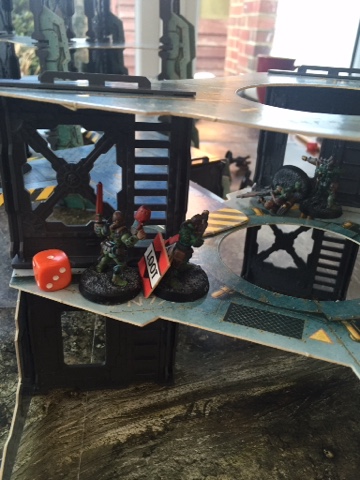 At the end of our short but sweet campaign I emerged with a narrow victory over my opponent but it was a really close call that could have gone either way at a number of key nexus's throughout the day. 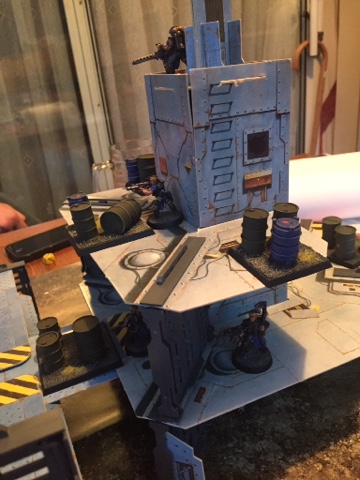 This truly was an amazing day of gaming and we played consecutive battles for over twelve hours without it getting boring at any point. We were both sucked into the micro-management of our gangs and started to get quite emotionally attached to each of our gangers. The mini-campaign did highlight a number of issues such as the real need for juves who are able to act as effective meat shields for the far more important gangers.

We will definitely be playing more games of Necromunda in the near future and expanding our selection of models so that we can upgrade our gangs suitably; additionally I'll be looking to try and get other members of our gaming group to raise their own Underhive forces so that we can run an even larger campaign!

Posted by LegioCustodes at 17:52