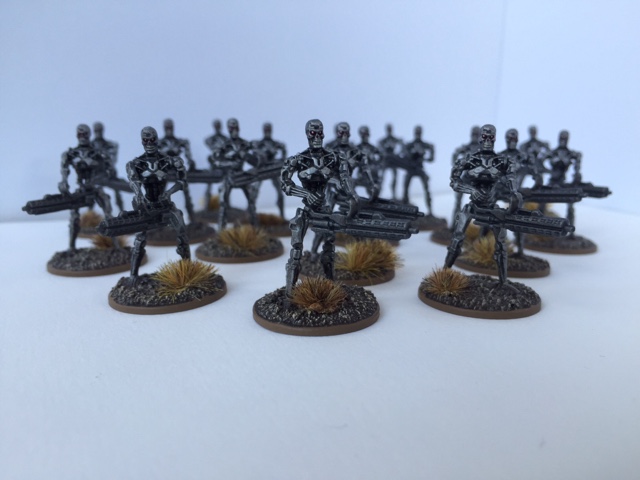 Let's be honest, at some point every single one of us has wanted to be John Connor or Kyle Reese...fighting the good fight and leading the Human Resistance against the insidious machine forces of Skynet....and finally there is now a table top game that lets us do just that. 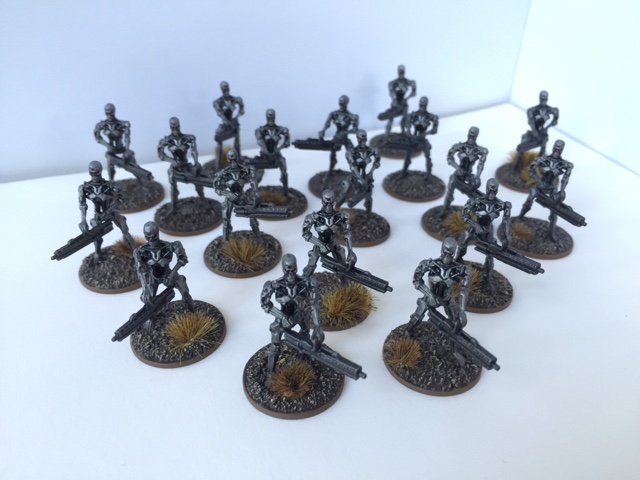 I'll review the game at a later date but for now I just wanted to share the miniatures I have painted thus far.

I have started off with the Terminators (T-800's to be precise), and I painted up the initial ten that come in the main box, plus a further eight normal endoskeletons and an additional five special weapons troopers. 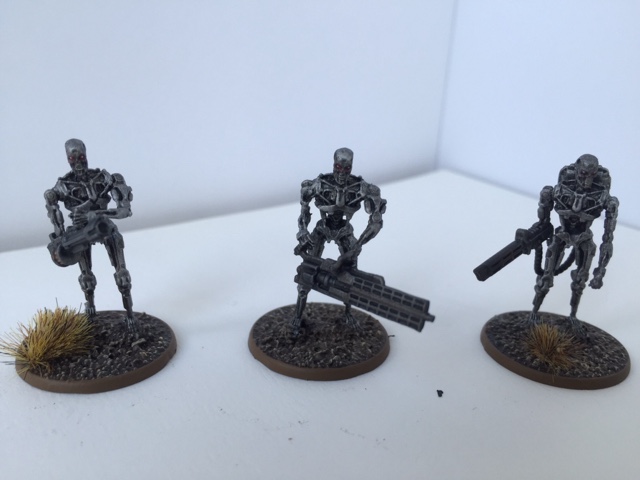 These models are great (though the metal special weapons troops are a little fragile) and really capture the look of the iconic machines from the films. 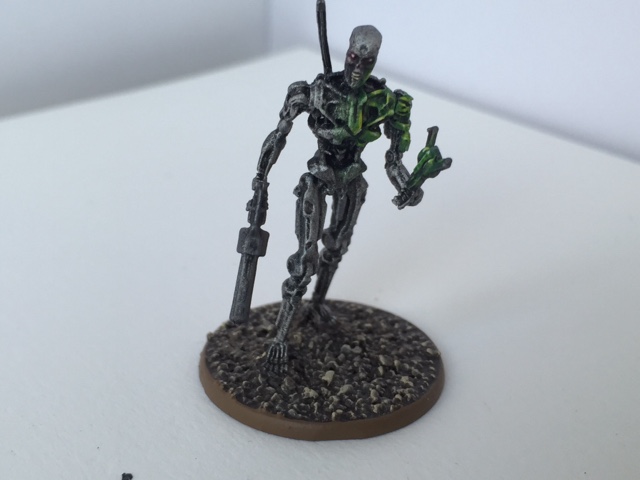 This fellow here is a command terminator with some form of handheld 'tricorder' and so I used him to add a bit of color to the force with some Object Source Lighting (OSL) in green. 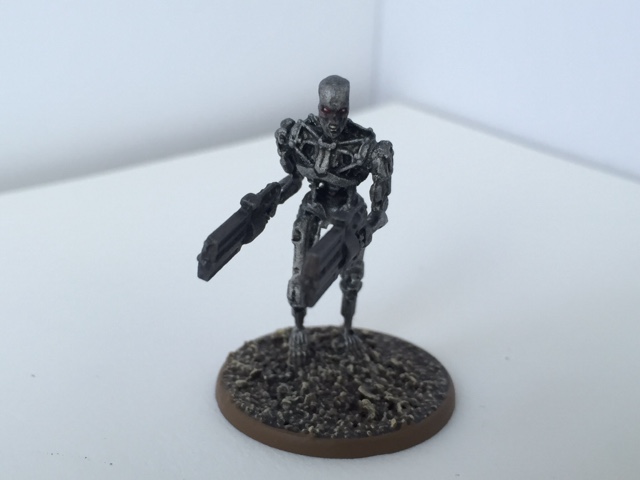 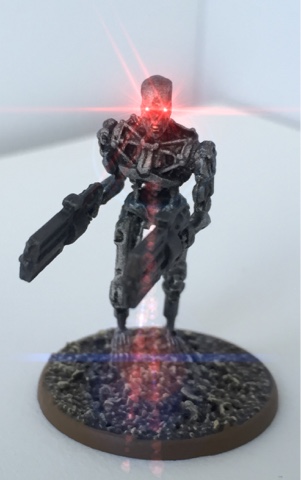 This terminator is firing two plasma rifles in  pose very reminiscent of the intro scene from Terminator 2: Judgement Day. 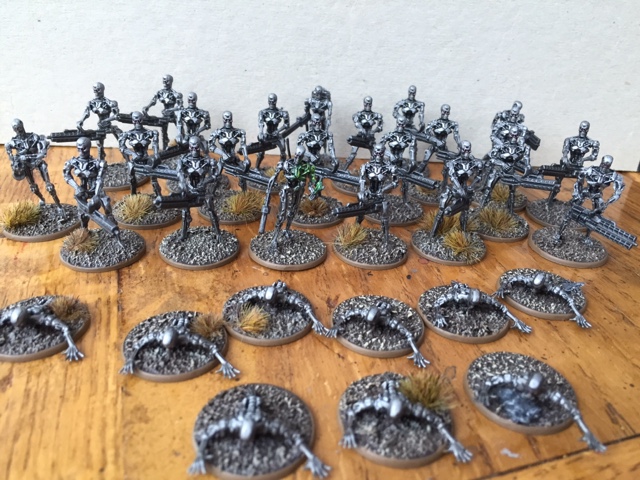 The set also comes with a number of damaged terminators (aka crawlers), the T-800 is a pretty durable unit and so when it is injured in the game it can potentially survive and return to life as a crawler that persists in dragging itself towards your troops.

'That Terminator is out there...it can't be bargained with, it can't be reasoned with, it doesn't feel pity or remorse and it absolutely will not stop until you are dead!' 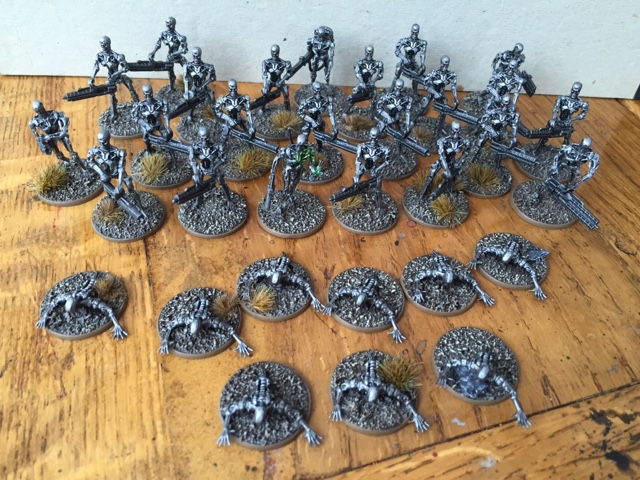 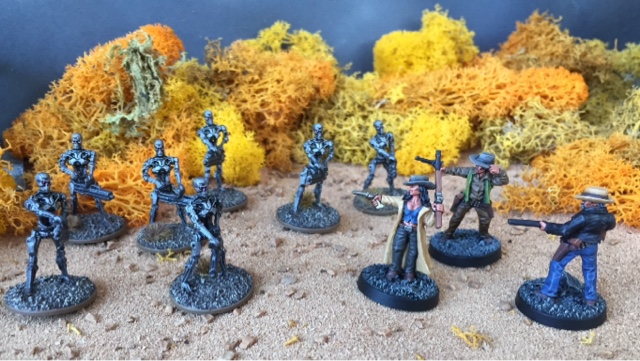 From my own personal perspective I am also aiming to utilise these awesome figures in my homebrew Fallout games as proxies for the Synths from Fallout 4 (there you go Orlygg...I promised I had something up my sleeve for these guys). Above we can see them engaging a group of NCR Rangers that appear to have traveled a long way from home...I can only see this fight going one way!

Overall these models were a joy to paint and I was able to churn out twenty-three of them in a week or so of painting sessions... that's the joy of mass produced chrome endoskeletons.

Next up I will need to paint up the stack of human resistance fighters that are waiting patiently on my paint station.

Posted by LegioCustodes at 19:50