So I’ve painted up a few more Sisters of Battle Imagifiers this week in order to further bolster my steadily growing Adepta Sororitas forces who will be accompanying their sisters in a refight of the ‘Battle at Sanctuary 101’. 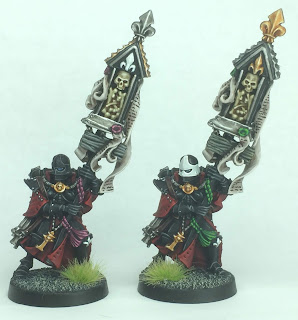 These models are the 2002 signifier variants where the featured sisters are in fact carrying the bleached bones of some saint or other in a reclusiam that has been handily mounted on a large banner pole.

These venerable girls will be used to bolster the overall fighting prowess of my assorted squads and provide them some valuable aura abilities/enhancements during the looming battle against the insidious Necron foe! One of my favourite things about eighth edition is the ability of characters and other key models to improve the performance and efficacy of other nearby units.

I have to say that I really enjoyed painting these models, they are lovely old sculpts and gave me a real trip down memory lane! Next up I’ll probably working on another Necron HQ Choice for the opposing side.
Posted by LegioCustodes at 16:51