Given that the force of Necrontyr that attacked the facility at Sanctuary 101 was so big that it managed to completely obliterate the Sisters of Battle convent on the planet it makes sense that it was probably well led and efficiently organised.

Therefore this week I have spent some time filling out one of the mandatory HQ slots for my growing Necron Force. 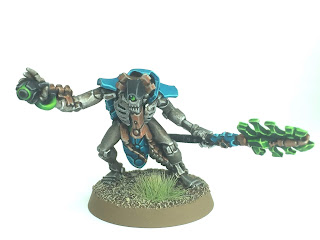 I decided to go for a classic Cryptek figure as primarily I think it is a cool model but secondly the buff that these characters give nearby Necron Infantry units basically doubles their resilience... something that will prove useful when facing a barrage of Sororitas Bolter fire!! 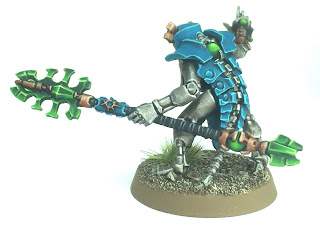 Whilst this is a lovely sculpt I have to say that this figure has taught me something.... Finecast Resin is absolute rubbish. This was previously a metal figure but my version is finecast; as such ... the edges have lost definition, it’s fragile and bends too easily... I can see why Aeldari players bemoan the fact that all their aspect warriors are made out of this crap. 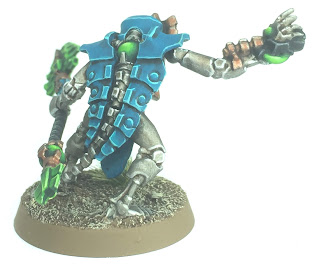 That being said I think I did a good job on the final miniature; closely following the colour scheme on the blister pack!

I now have a shiny new character to lead my Necrons to ultimate victory against the Imperial trespassers!

I think I’ll probably do a few more Crypteks for my final force to fill out those HQ slots!

Posted by LegioCustodes at 01:18