Finally I have had a chance to get my Primaris Marines on the table and see what they can do!!

So me and one of my good mates met up for a game of 40k over the recent bank holiday weekend. He has spent the last few months intensively building up his force of Primaris Dark Angels whilst I have been working hard on expanding my new Crimson Fists so this was the perfect opportunity to get our forces into action.

As ever this new version of 40k was exceptionally bloody so the gaming session went very quickly with not many troops left on the table at the end. 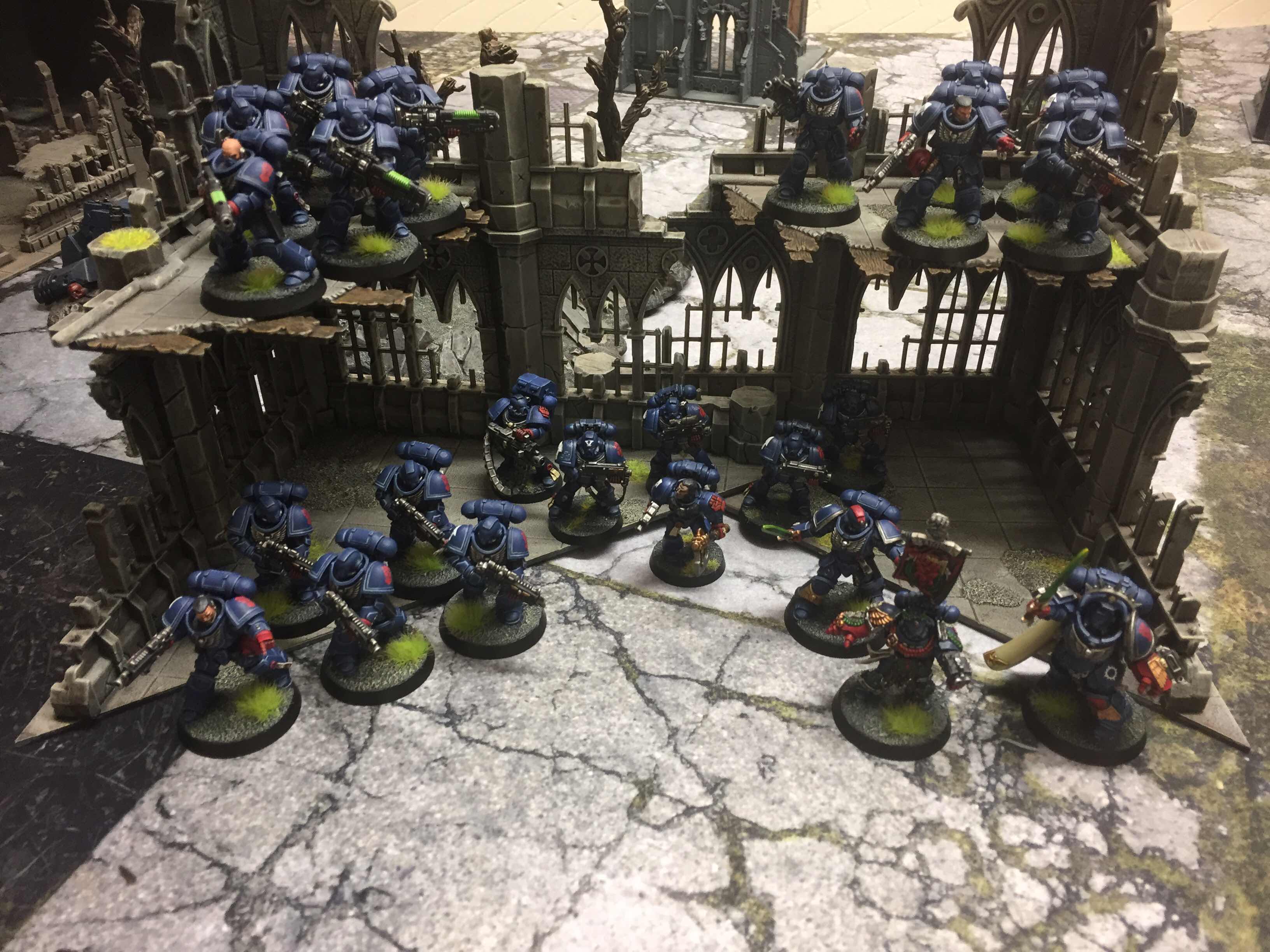 My army consisted of a predominantly Primaris Force but with a few old style marines thrown in to make up the numbers.

My Warlord was the venerable Chapter Master Pedro Kantor who was ably assisted by a Primaris Captain and Lieutenant.

For my Troops choices I had two squads of Intercessors and a small Tactical Squad. They were backed up by a squad of Hellblasters for heavy support. 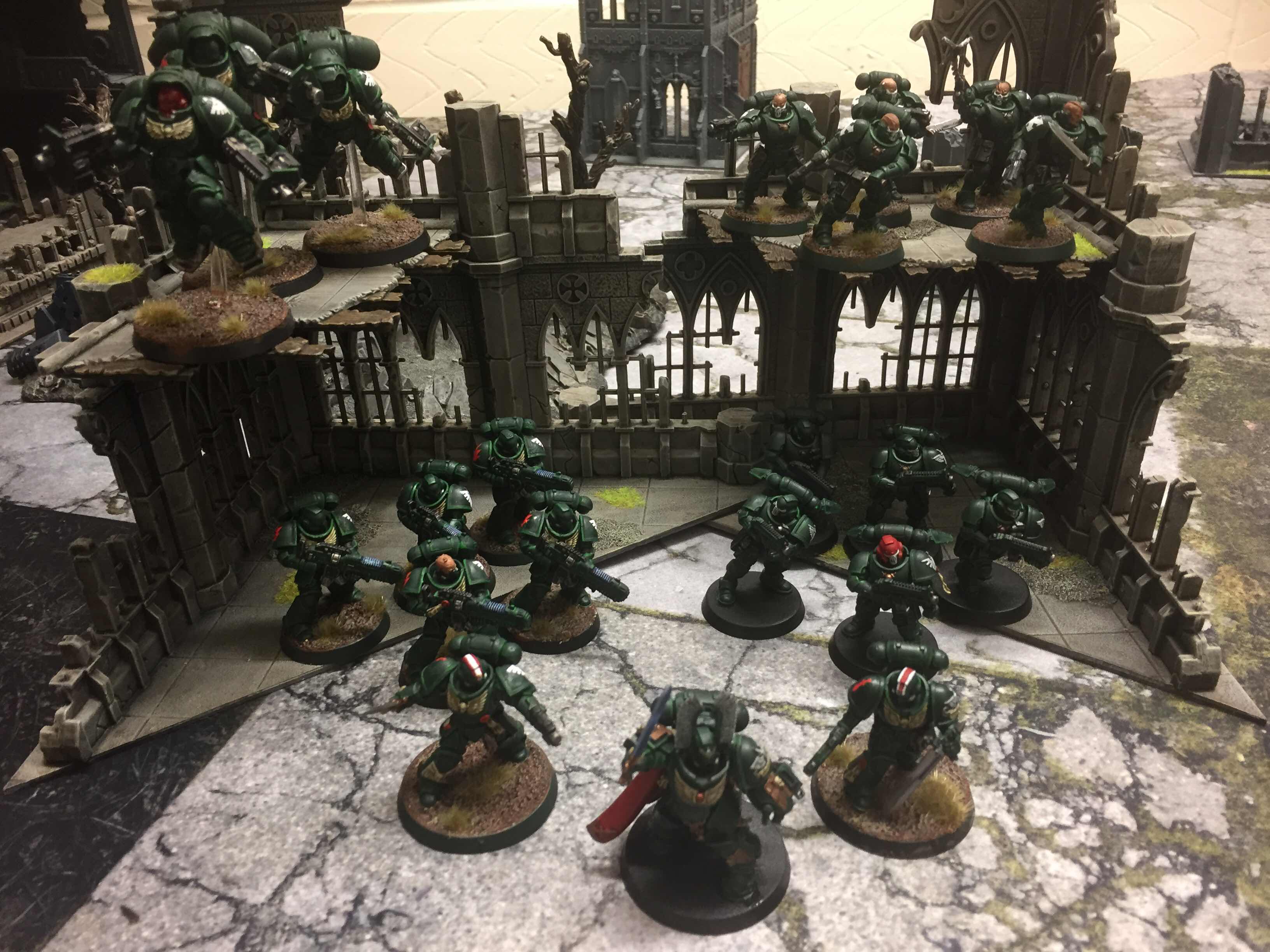 My opponent’s force was led by a Primaris Captain and his two Lieutenants; with two Reiver Squads, a Hellblaster Squad and some flying Inceptors. 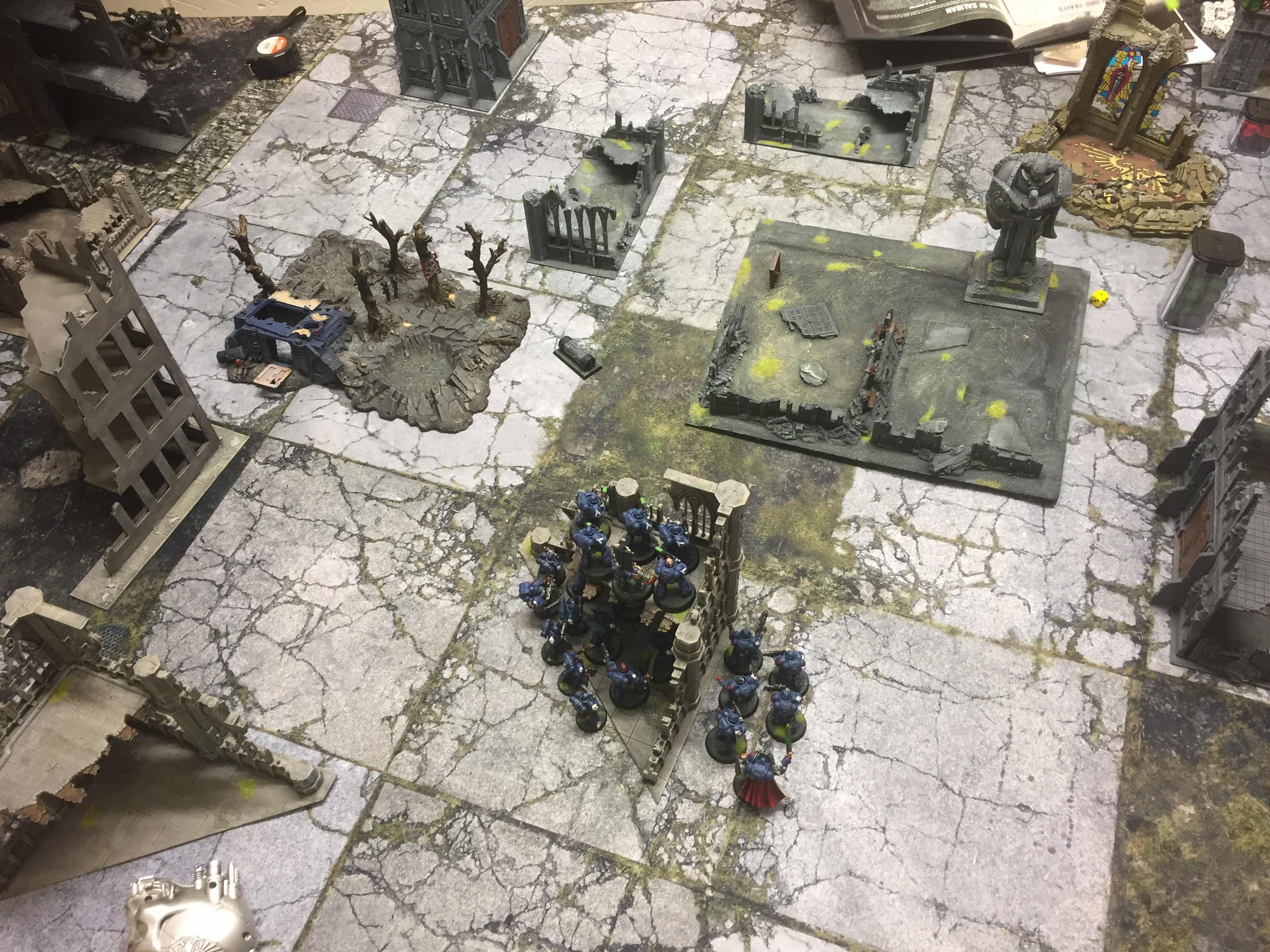 Both our armies were battle forged and thanks to shrewd use of the detachment system my opponent had 4 Command Points whilst I had 6 to use on stratagems throughout the game. 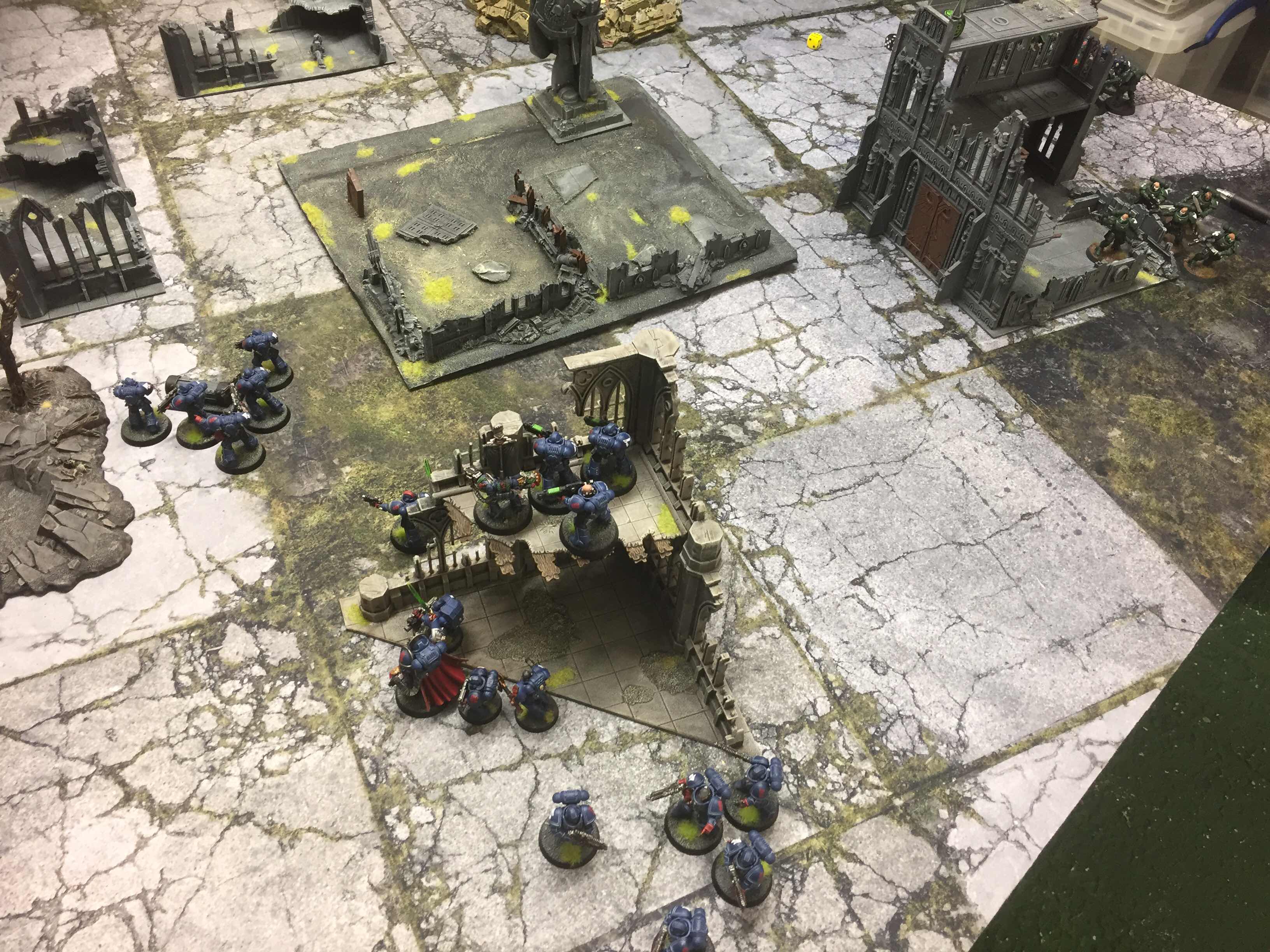 The mission we chose involved the use of tactical objectives that were randomly generated each turn; and as I always invest in a deck of Datacards when new Codices are released we used these to generate the objectives. 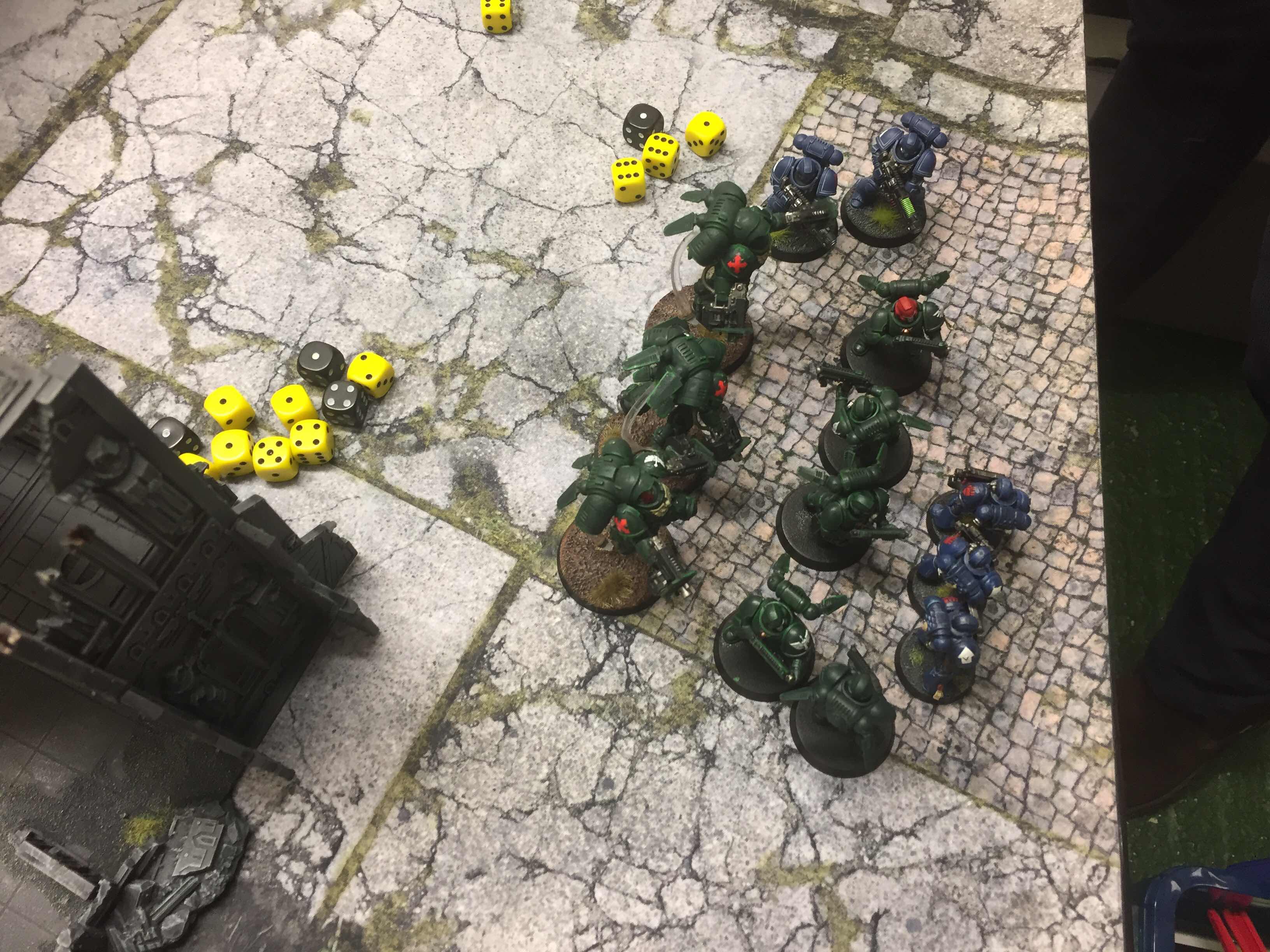 The random nature of the Tactical Objective formula is great and it really adds a layer of strategy and tactics that is lacking when the game is played without these.

I noticed initially that as I didn’t have deep striking troops I started at a distinct disadvantage as I couldn’t swoop in to claim objectives. However through precise application of fire I was subsequently able to whittle down my foe’s troops meaning later in the game I had much greater freedom of movement. 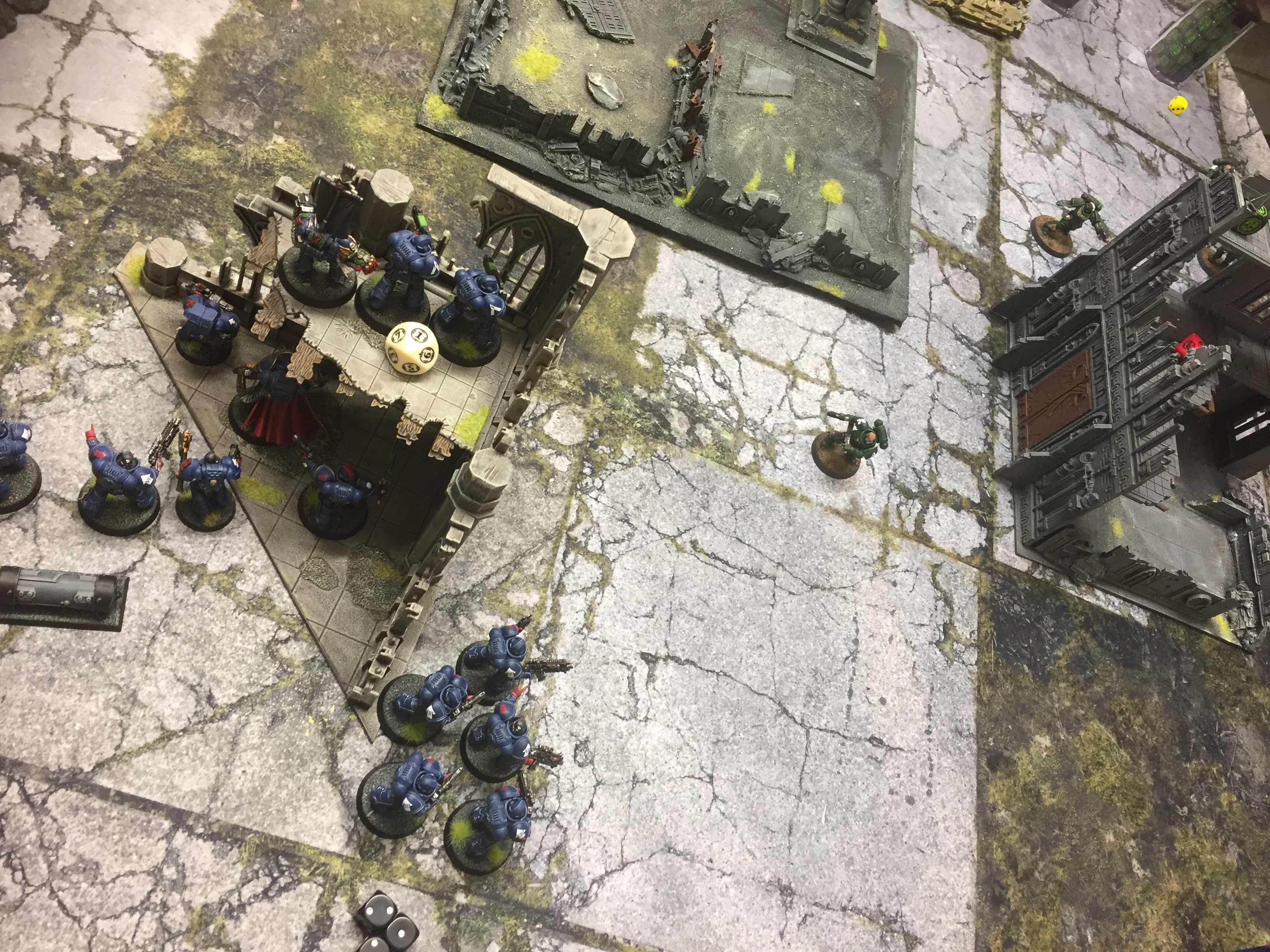 I quickly realised the key to eighth edition is making beat use of the synergy of different units (particularly commanders) to support and enhance each other. As such I was careful to move coordinated formations around the battlefield rather than leave individual units out on a limb. 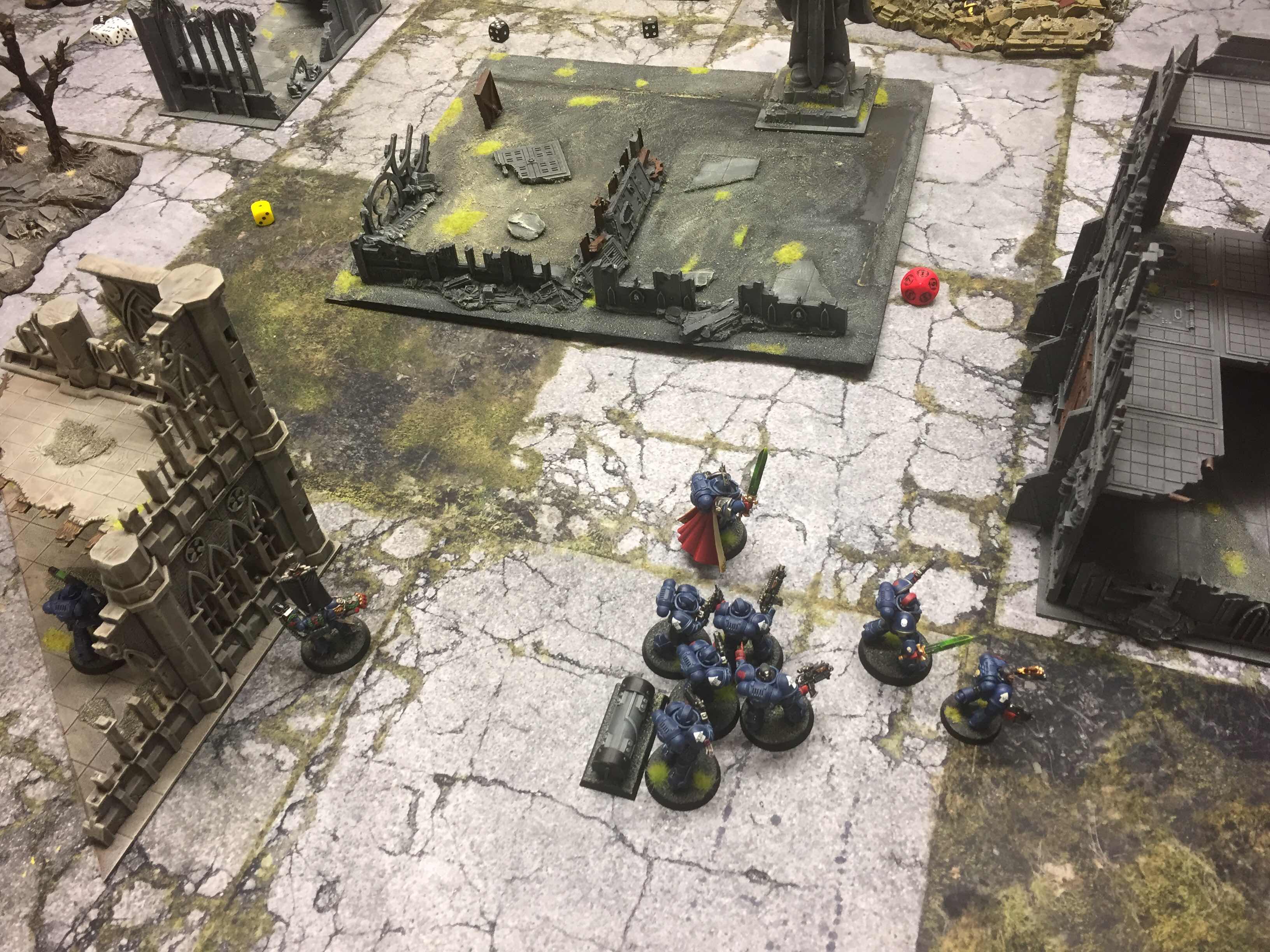 This reflects actual warfare quite accurately as commanders will rarely leave their troops without some form of leadership on the battlefield. 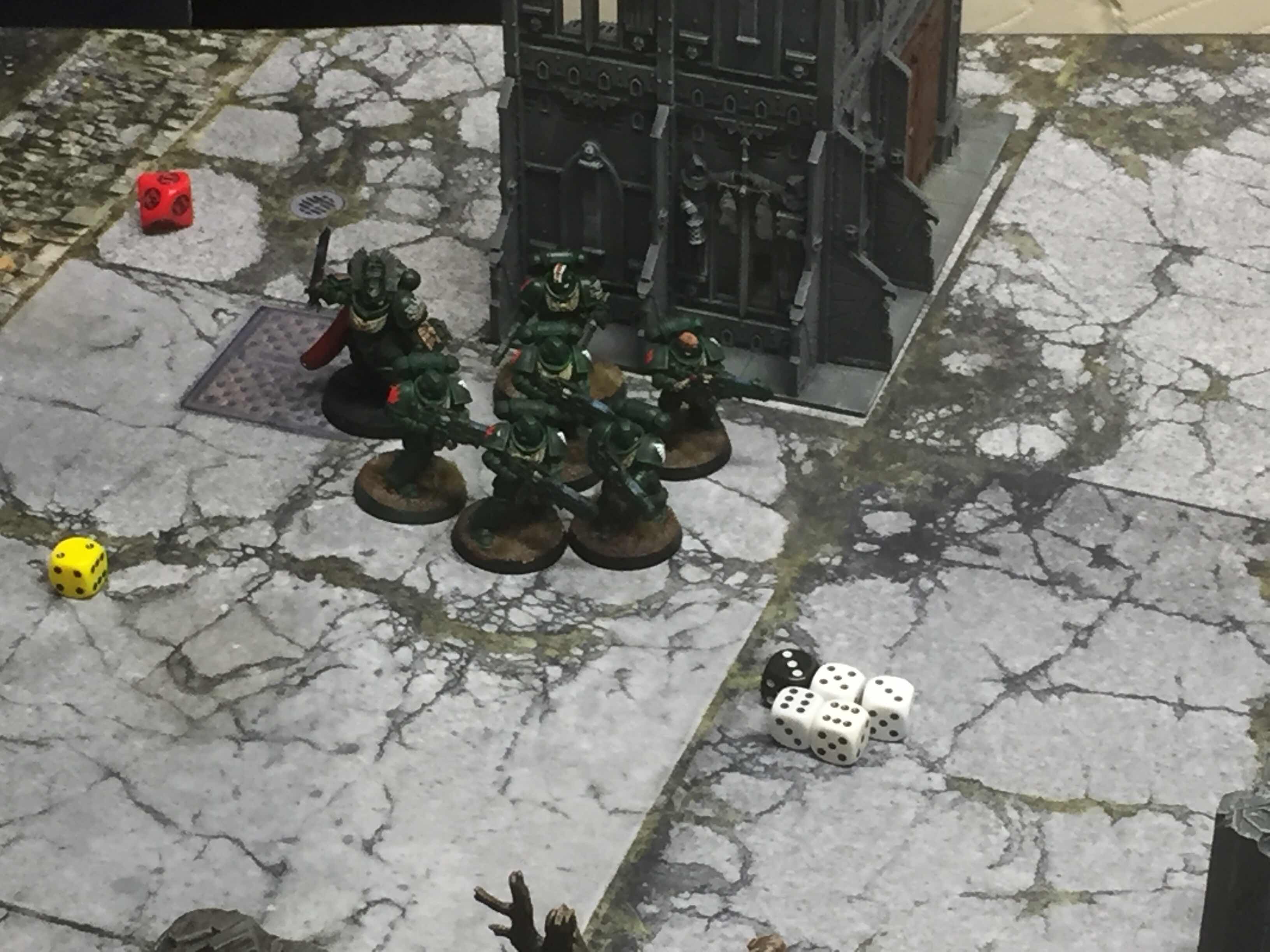 My opponent also realised the need to support his warriors appropriately and so most of the green clad squads of Caliban were accompanied by a character or two to drive up their combat efficacy. 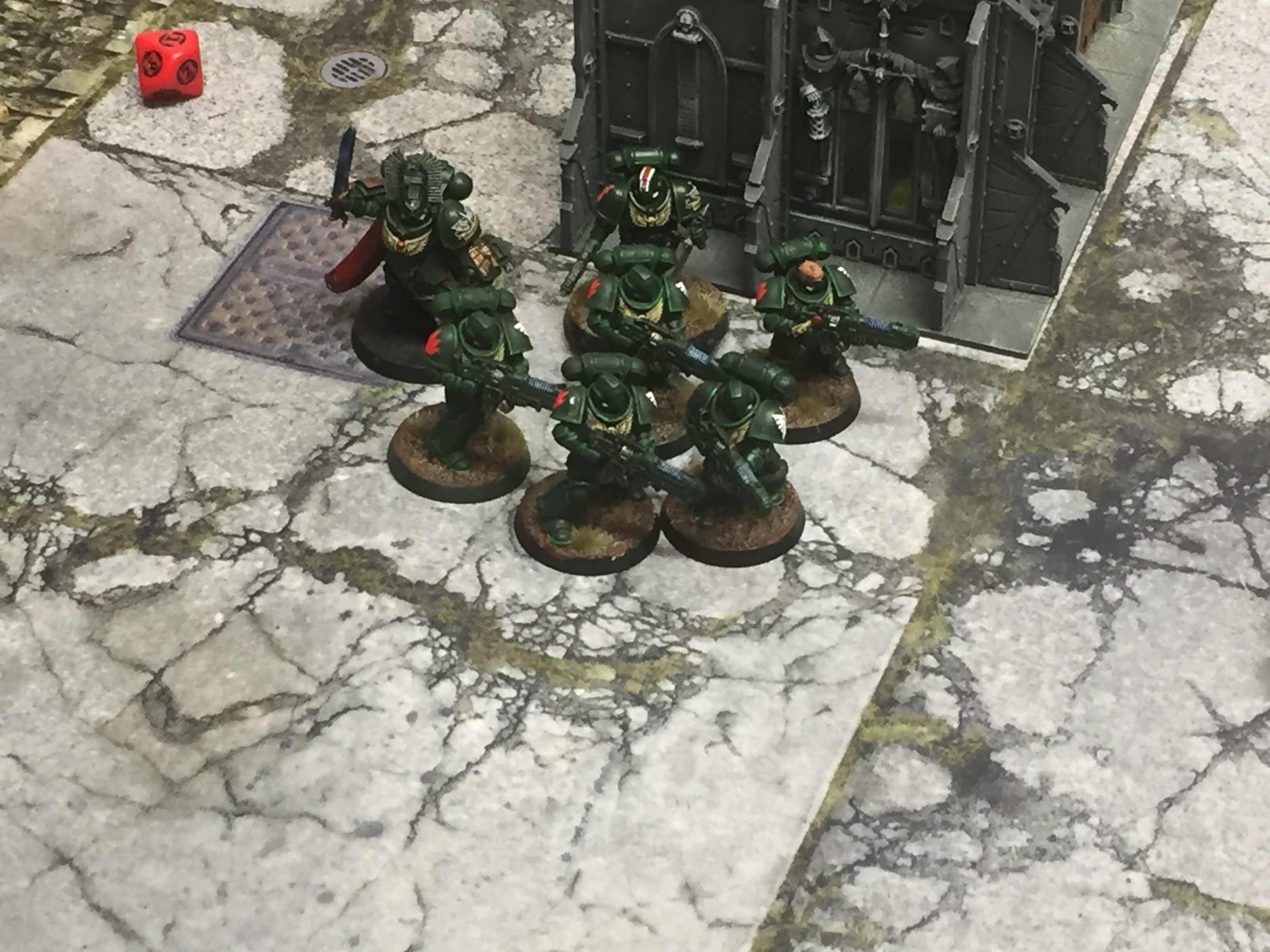 The only problem with this is that if a character isn’t as mobile as the troops he is supporting then you either need to compromise on how far the ‘pack’ are moving or whether or not the grunts are going to break away from their glorious leader.

Both courses of action have their pros and cons... but it’s all part of the fun of the game to decide which risk to take. 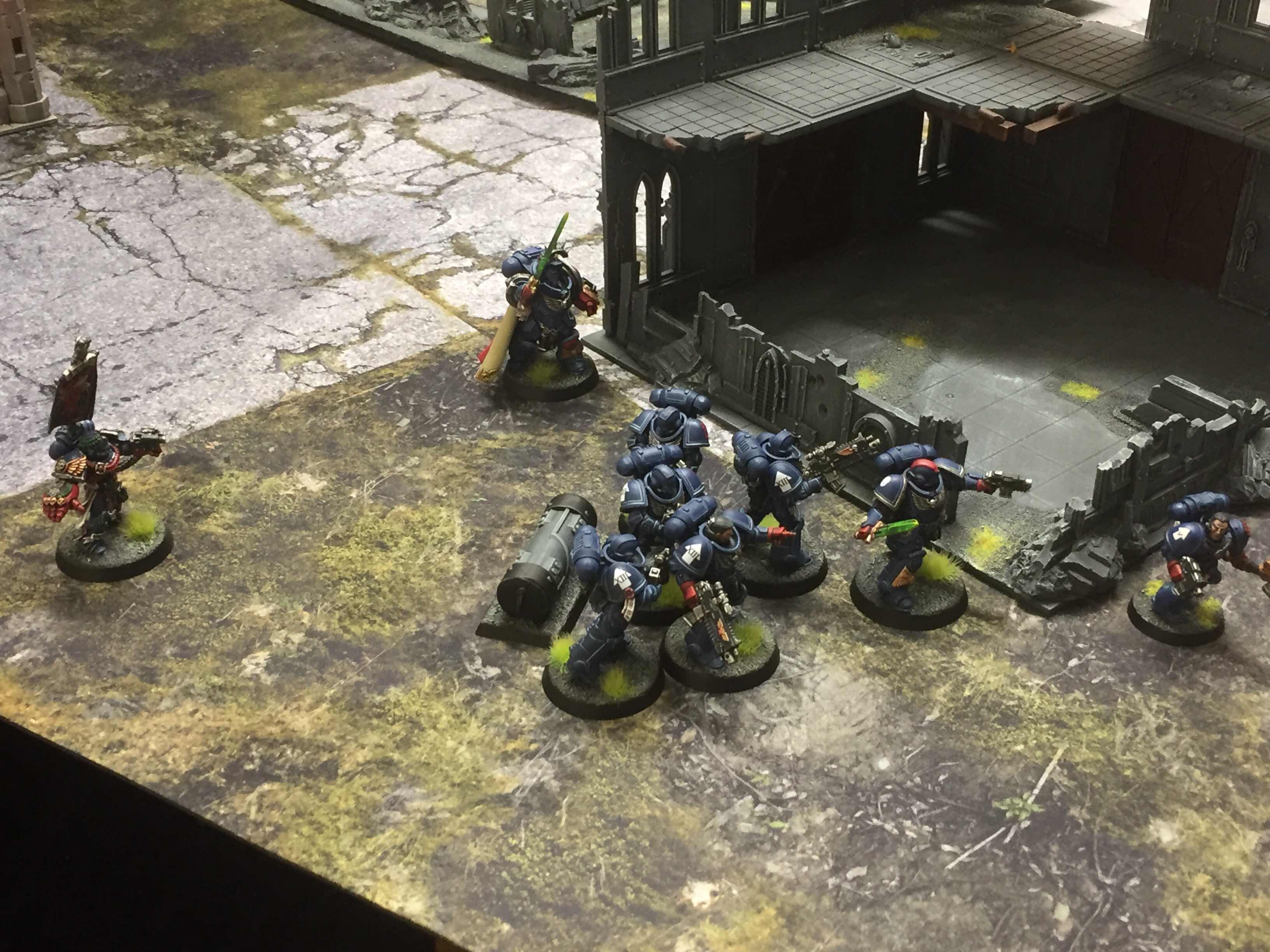 Throughout the battle my troops made best use of cover as they traversed the ruined Imperial city because obviously the best protection from being shot is simply to not be seen in the first place... That being said the sheer speed of my opponent’s Inceptor squad meant that no matter how safe my Crimson Fists thought they were there was still a risk of some big bloke with two handheld heavy bolters dropping out of the sky and shooting the shit out of them. 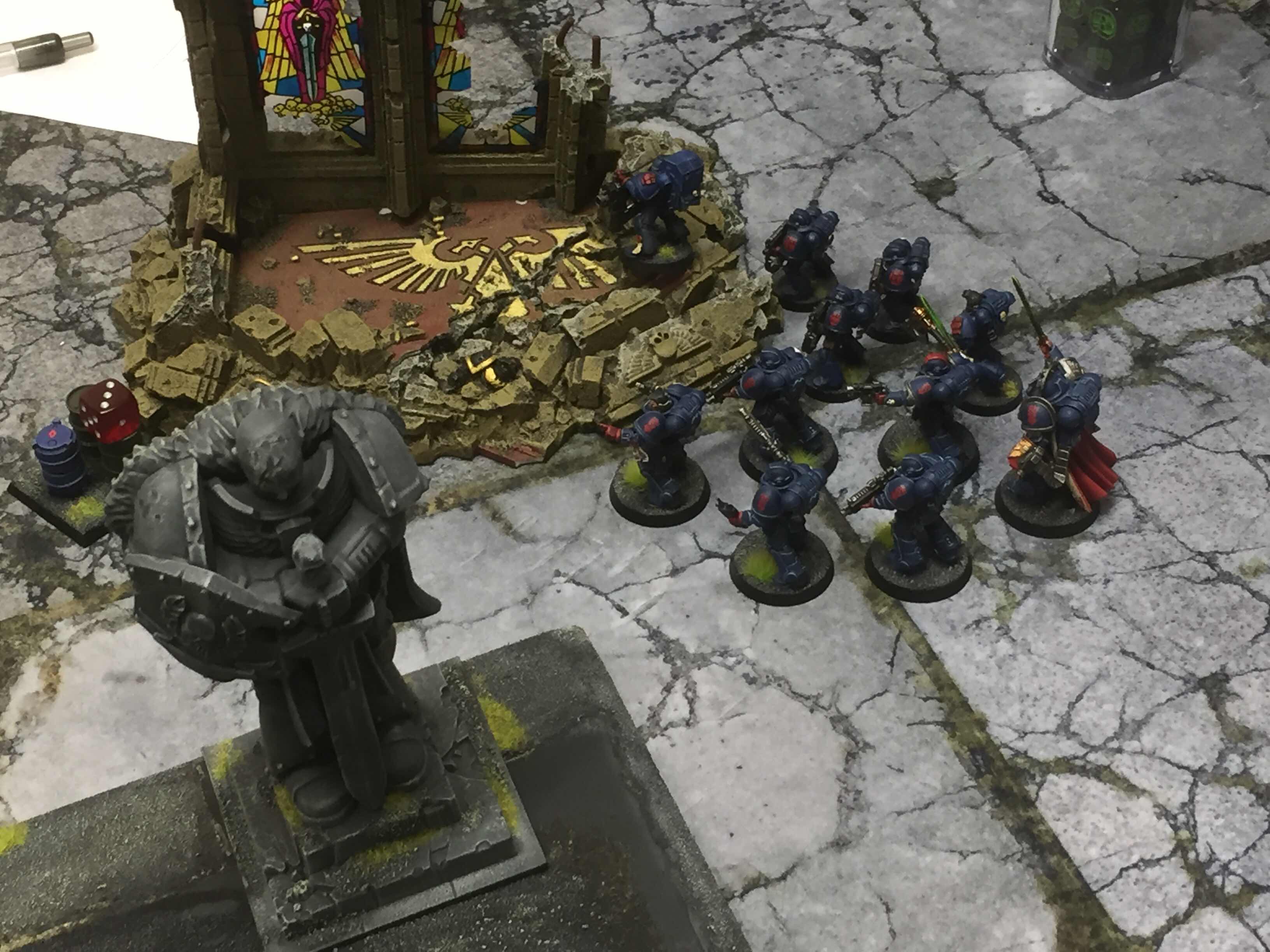 The game proved to be brutally violent and exceptionally bloody; this in the final turns I was forced to commit my forces to all or nothing charges in order to seize objectives and slay enemy characters. 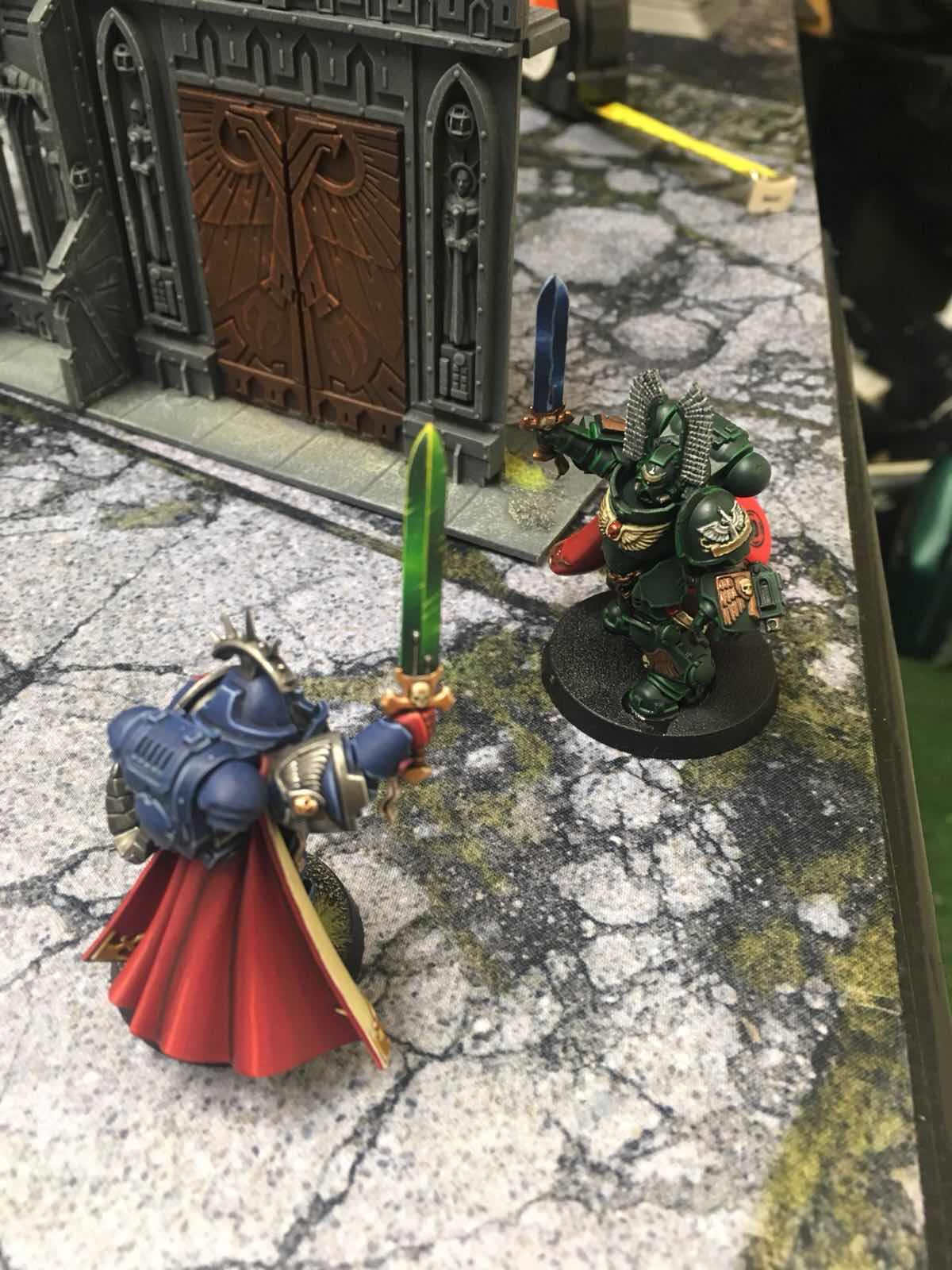 However in true cinematic style the final result came down to the two Primaris Captains engaging each other in earth shattering melee combat.

It was a close run thing; but in the end my blue armoured commander just about managed to slay his Dark Angels counterpart with a devastating punch from his massive gauntlet.

When we tallied up the victory points I had just managed to secure a victory over my opponent... but I can assure you it was very, very close and it could have gone either way!!

Once again eighth edition was amazingly good fun that seems to be the perfect blend of Rogue Trader/Second Edition and later versions of the game.

We had a blast and have already booked in our next gaming session... so I’m off to the painting table to churn out some more Primaris reinforcements.
Posted by LegioCustodes at 14:34