After a few recent posts focused on the joys of 6mm epic I thought this week we should return to a bit of classic 28mm action in the form of a second edition Warhammer 40,000 battle report. Once again my wonderful and very supportive girlfriend stepped up to the platform to take on the mantle of my opponent in this 1990's themed battle. To make a change I skipped the usual retro green battlefield and lichen, instead replacing it with my 6 x 4 urban warscape and associated city ruins. 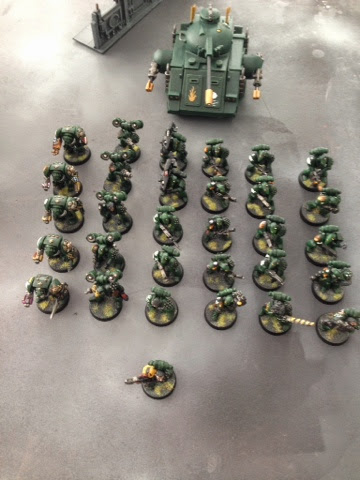 With the battlefield set up the time came for us to begin choosing forces; and so the usual suspects from the Crimson Fists and Salamanders were rolled out to do battle in the name of their Primarchs once again.

In order to keep things balanced I decided to use matching forces; so each force consisted of a Commander with a Power Axe; x 3 five man tactical squads with a flamer each; a five man assault squad complete with a sergeant packing a plasma pistol and a five man devastator squad with two missile launchers. My girlfriend has previously mentioned that she wanted to try using vehicles and as I have recently finished my 1989 Salamander's Predator it made sense to include a bit of armoured support for both forces... 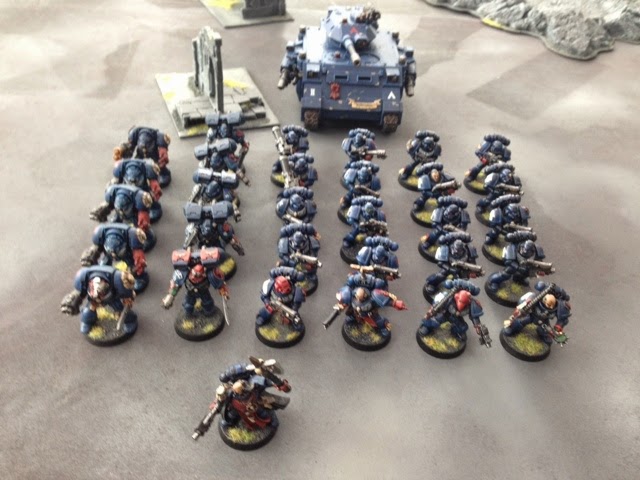 We then drew our mission cards and both managed to get the 'Take and Hold' mission meaning we would be fighting it out for an objective marker (ammo crate) located right in the middle of the table. 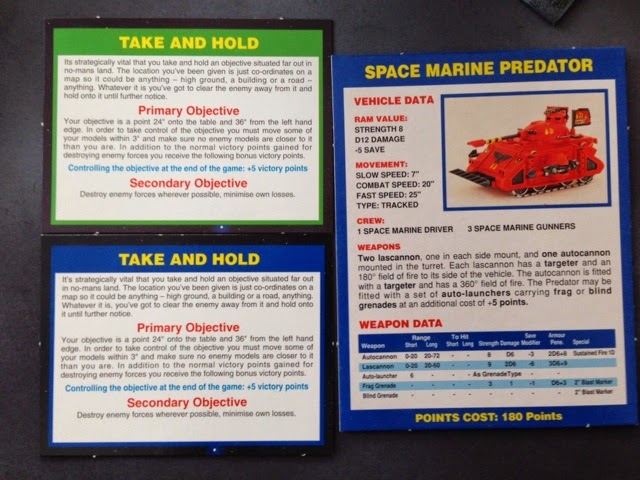 Now it was the time to set up our forces; predictably both of us placed our heavy weapons troops in the highest ground available in order to give them dominating fields of fire from the very first turn. Assault marines were positioned out of sight but close enough that they could use their limited power of flight to leap across the battlefield as soon as possible. The rest of the squads then took what cover they could. 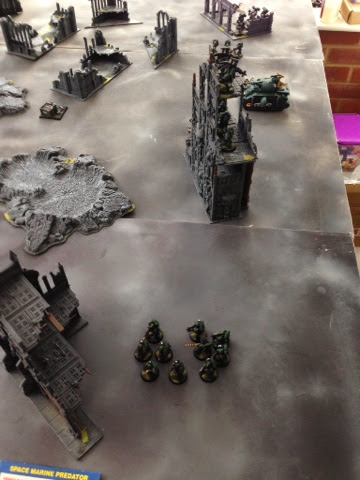 We rolled to see who would go first and My girlfriend managed to seize the initiative and took the first move... 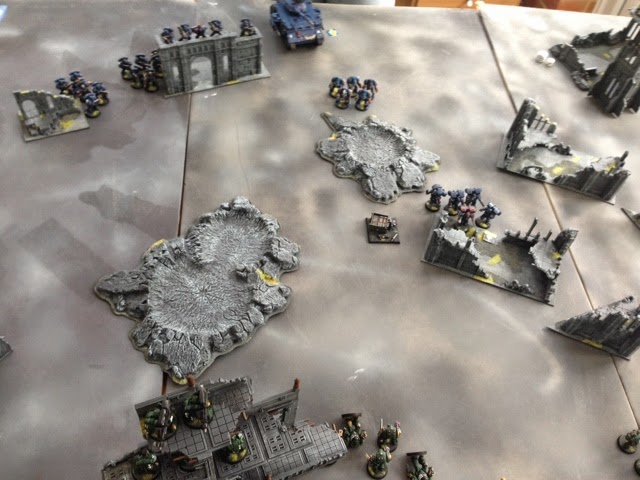 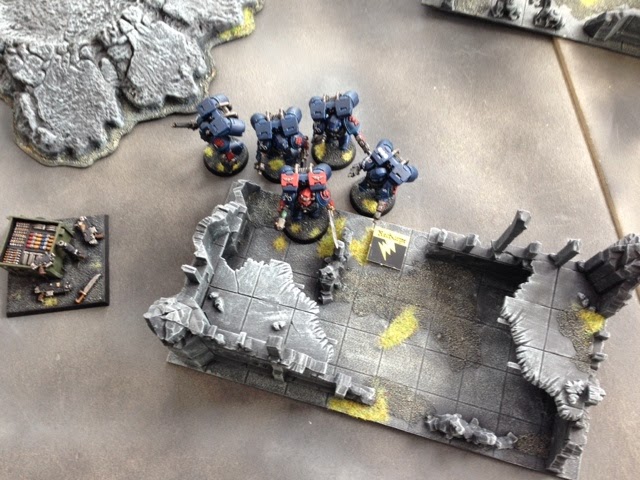 Her blue armoured assault marines fired up their jump packs and bounded forwards to take ahold of the objective almost immediately... 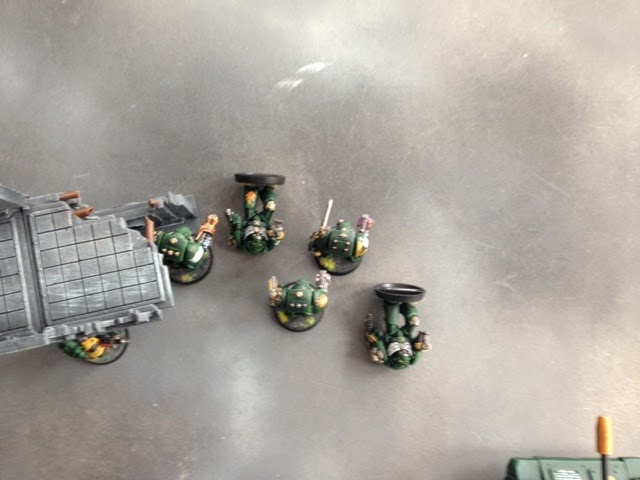 ... Whilst her tactical squads and devastators whittled down my terminators with surprisingly accurate volleys of fire. 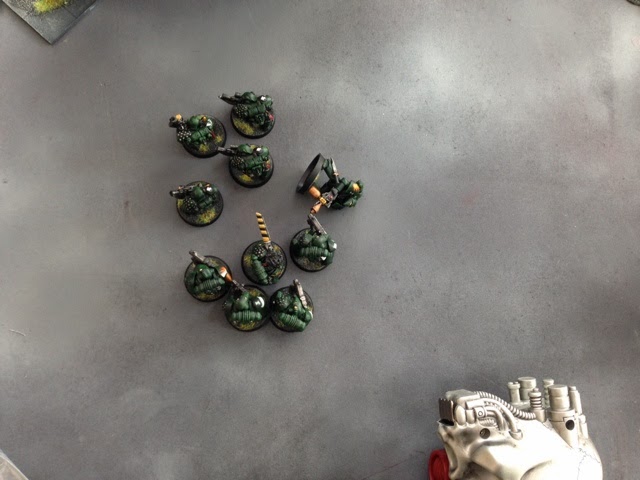 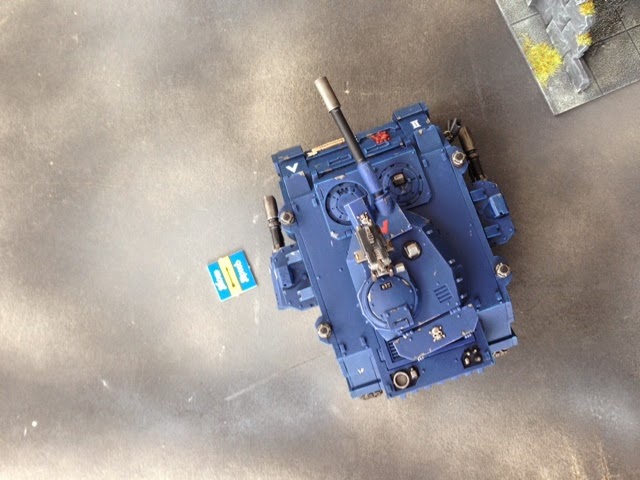 Her predator rolled forward seven inches at slow speed simultaneously using it's high-powered autocannon to cut down one of my flamer marines. 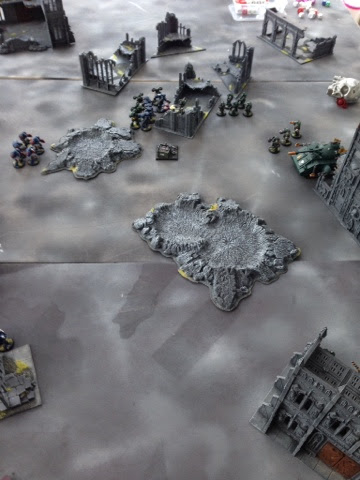 In light of the Crimson Fists aggressive opening moves I decided I needed to try and take back the iniative before it was too late... 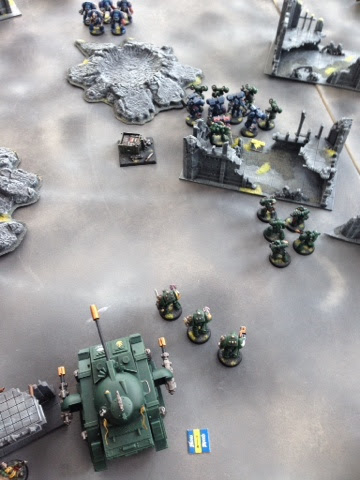 My assault marines also leapt forwards in order to engage their opposite numbers; whilst a slower moving tactical squad ran up behind them to provide whatever support they could.

My predator moved forward at slow speed...gradually opening itself a clear line of side at the enemy tank; once it was in a suitable position the thank's crew locked on and opened fire with the autocannon and both lascannons... 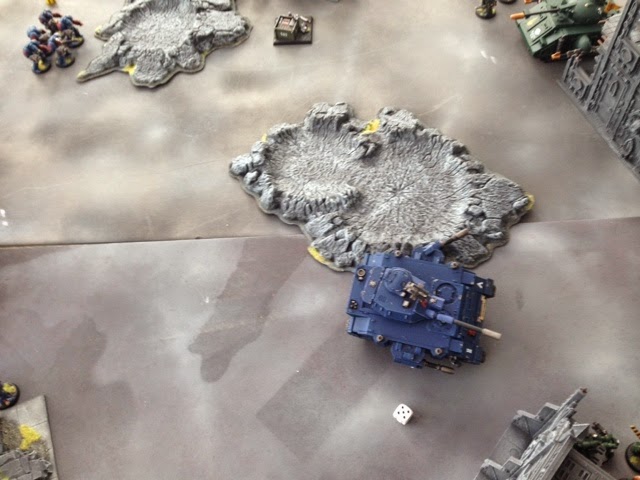 ...scoring a direct hit; this resulted in the crimson fist's predator's right track being blown off, causing it to spin 45 degrees and plow forward 24 inches before grinding to an abrupt halt in the middle of my lines. 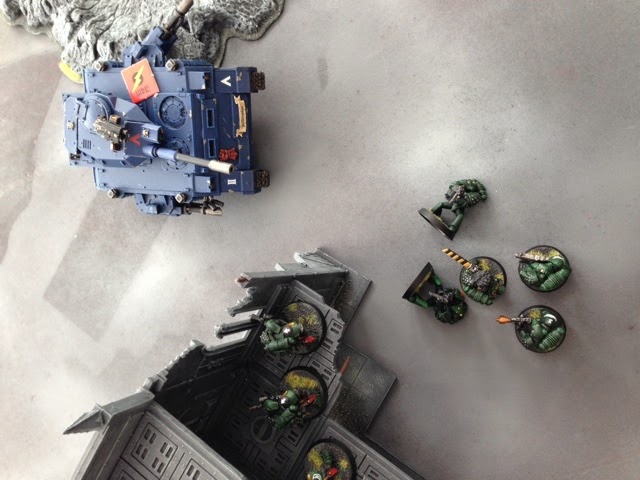 Although the Fist's tank had been rendered immobile it's guns still worked and it managed to scythe down a number of Vulkan's screaming descendants before it's autocannon jammed. 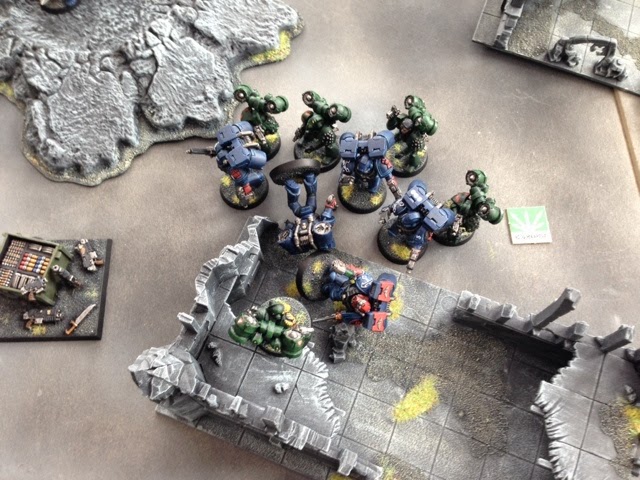 The assault marines busily tried to cut each other to ribbons, as chain blades and bolt rounds were turned aside by thick ceramite armour. However Dorn's scions initially fared worse and sustained more casualties. They then failed their leadership test but being space marines they were merely shaken as opposed to completely broken... 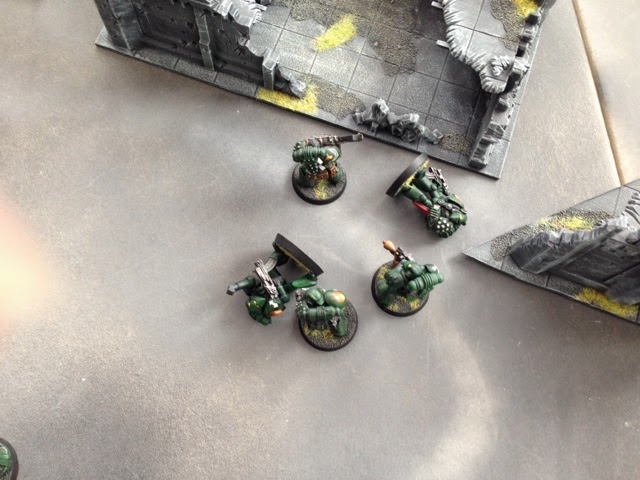 The nearby Salamander tactical squad then moved into aid their assault brothers, but as they advanced their movements didn't go undetected and the Fists devastators quickly recognised the risk that they presented and thinned their numbers down with a few well placed krak missiles in the face...Ow! 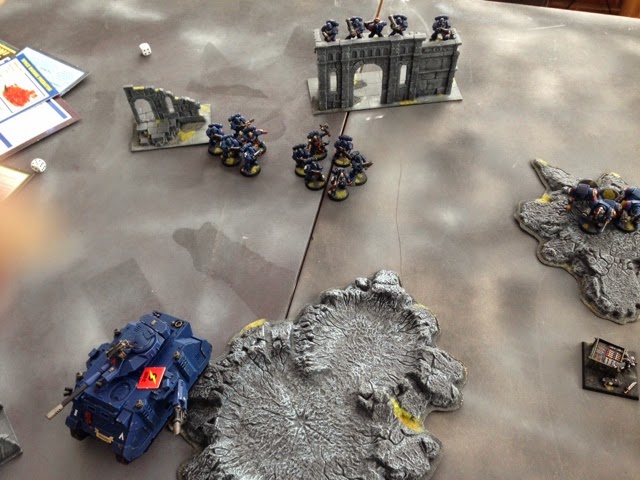 The Crimson Fists Commander decided to lead by example, cocked his bolter and bellowed for his two nearby tactical squads to follow him in an heroic dash towards the objective. 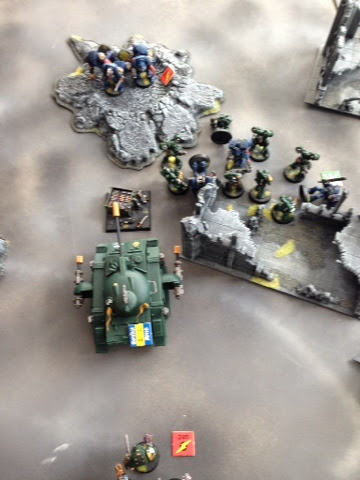 Meanwhile the Crimson Fists clad in tactical dreadnought armour also moved through a nearby crater in order to support their dying assault marine brethren in the ruins; whilst the Salamander's Predator also sped towards the objective. The Fists tactical brothers began to regret following their commander's fool hardy dash as the Salamanders made full use of the Space Marines rapid fire rule and scythed down blue Astartes like wheat during harvest. 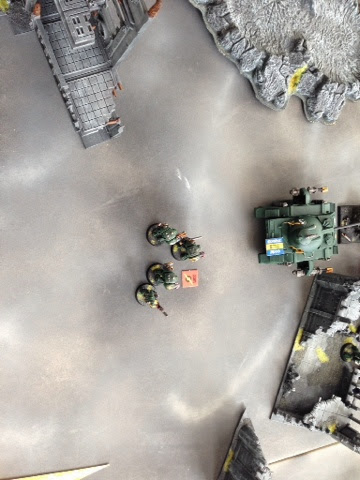 My green predator now formed the key to my plans for success and the tank's driver pushed up the vehicle's gear into combat speed. However the enemy devastators again proved their worth and recognised this a high priority target and fired two high power krak missiles into its hull... 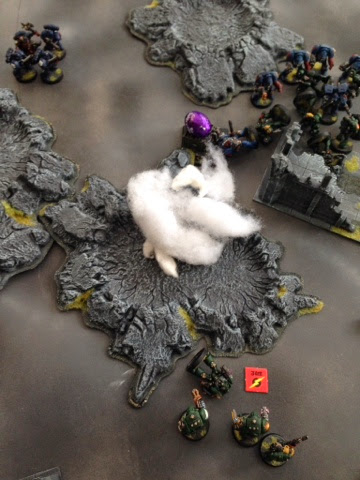 They smashed through the tank's ceramite armour as if it were tissue paper and came to rest deep inside the primary ammunition supply. The Space Marine crew had a moment to stare in absolute horror before the missiles detonated and the tank was blown to pieces leaving a smoking crater in its place. In fact the resulting detonation was so powerful that it killed both a nearby Salamander's Terminator and Crimson Fist's Terminator in an incandescent ball of flame. 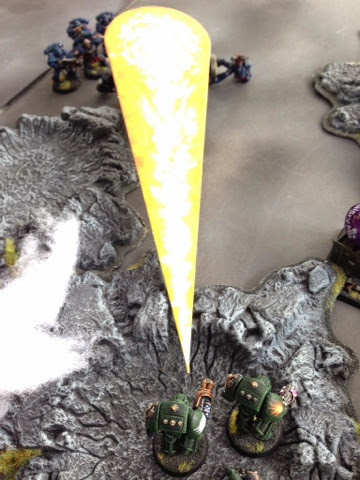 My Terminators were so aggrieved at the loss of their brother that they decided to take revenge by using the Heavy Flamer to deal with one of the Crimson Fists tactical squad that were accompanying the Commander. 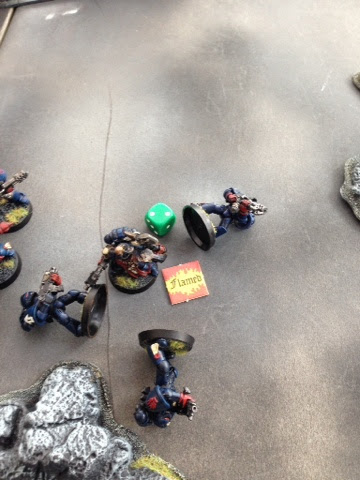 My God!! The heavy flamer is so effective... an entire squad dead and the Commander lost one wound before bursting into flames! Get in!!!! That template is massive!! I love the smell of toasted space marine in the morning.... 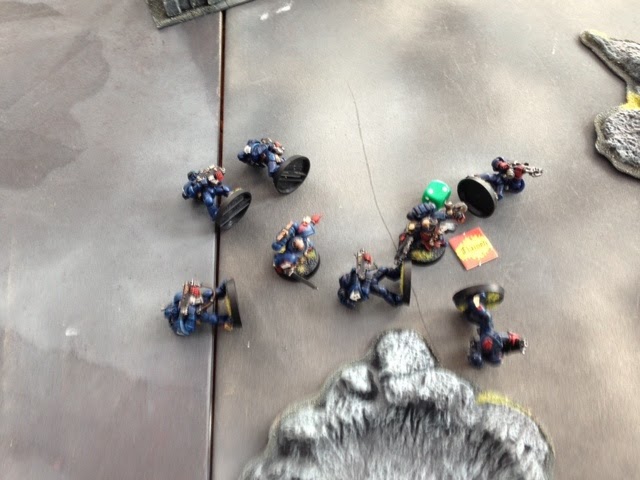 The dead Crimson Fists were rapidly joined in ignominious death by the majority of the second tactical squad thanks to the unerringly accurate bolter fire being dealt out from nearby green clad warriors who were hunkered down in the derelict imperial buildings. 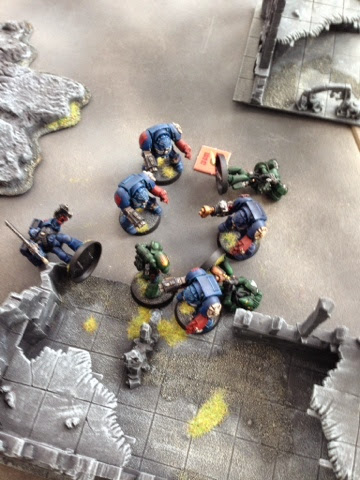 The melee in the central ruins became even more complicated; the with the assorted groups of assault marines and tactical marines now being joined by a group of blue-armoured terminators.

These veteran Astartes really pack a punch; their superior armour protects them from most enemy weapons whilst their mighty power fists and enhanced weapon skill allows them to take on most opponents with impunity. 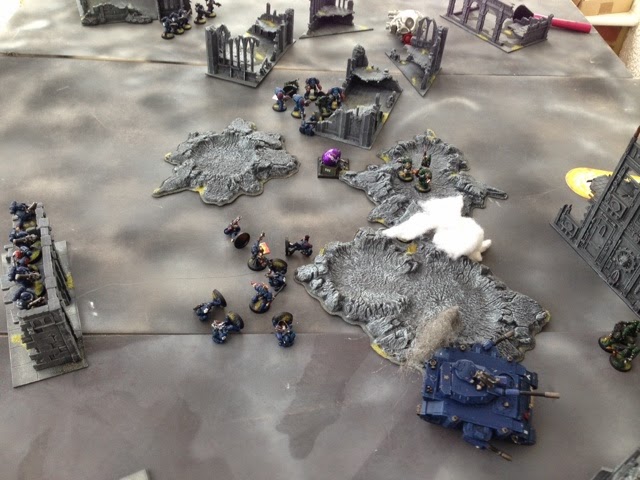 In the final turn of the game the table was carnage with dead and dying space marines littered all over the battlefield whilst the wrecks of tanks smoked and burned. 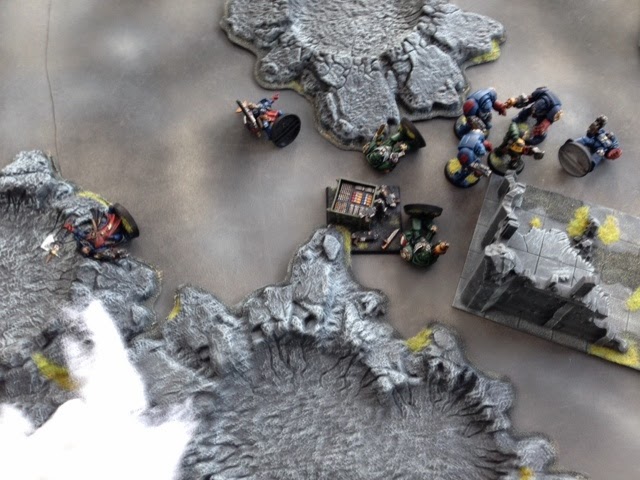 In a final bid for victory my devastators gunned down the burning Crimson Fist Commander; whilst my own warlord and remaining terminators charged into the brutal fist fight that was still raging by the objective.

And with that turn four and the game came to an end... So it was time to tally up the Victory Points.

I used the advanced scoring table out of Dark Millenium to work out the results. On this matrix I had scored 6 VPs whilst my girlfriend had only gotten 5 VPs. However a quick measurement with the tape measure showed that her Salamanders terminator was the closest model to the objective, meaning she had also earned another 5 VPs for securing the ammo supply!

This brought her final score up to 10 VPs ensuring a victory for the sons of Rogal Dorn and utter shame for Vulkan's successors. This was another glorious success for my girlfriend and very impressive it was too...she is proving to be quite a formidable warlord in her own right!!

Again it was a really enjoyable game; and so much more fun than the current edition. The presence of vehicles adds another tactical element to the play and was actually far less complicated than I remember from 20 years ago!! Maybe I'll use some psykers next time.

I can't wait for the next rematch!!

Posted by LegioCustodes at 13:35