I thought I'd spoil you all with two posts in two days, I'm such a great guy!

Today my best mate popped round for a catch up and a game of second edition Space Marine (EPIC). So after the obligatory McDonalds breakfast we set down to some old school gaming. We played our battle on a 5' by 4' table set up with a green felt battle mat, lichen and some retro epic buildings.

I won't go into too much detail about this game's set up rules as I covered these in my first epic post last October (worth a read if your new to the 1992 rule set).

First of all we started by choosing our armies to an agreed points value (2600); this is done by selecting cards which represent units (companies or detachments) and contain the details for the relevant troops and the number of models required. It also has the information for how many casualties this formation can take before it is broken, as victory points are awarded for breaking opposing units this is vital info.

My selection was as follows: 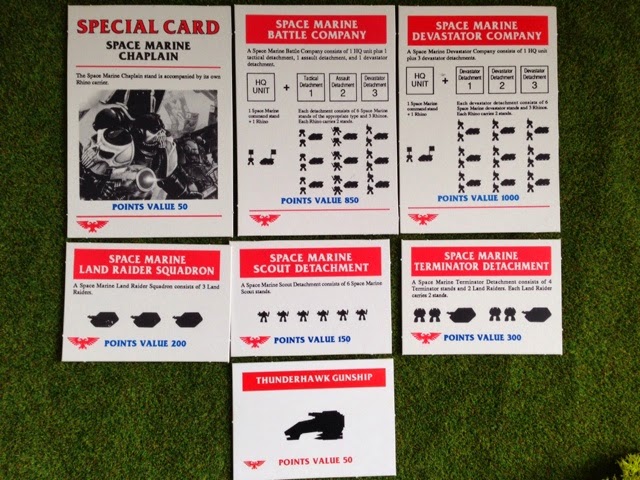 A chaplain to lead the force; this character gives all nearby troops a bonus in close combat so he'll be pretty handy as a force multiplier later in the game.

Next up was a battle company which contains a useful mix of troops which are suitable for most situations and I always field at least one of these. This was supported by a full company of devastators; these guys are expensive compared to other companies; but when holed up in buildings they can pack a serious punch. Next was a land raider detachment for some mobile firepower and some terminators with their land raiders too. Finally I fielded a detachment of scouts bundled into a thunderhawk gunship... Having been reading my old white dwarfs it seems these were a real power house back in the day for snatching objectives early on so I thought I'd give it a whirl!

My opponent chose the following formations: 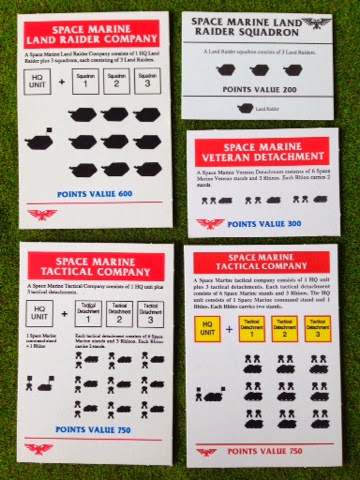 He stuck with mainly whole companies as opposed to detachments which is actually a sound idea as they come with additional command units included in the cost and also means you have to kill a whole lot of troops before the unit eventually breaks!

He chose two tactical companies;  a heavy hitting land raider company with an additional land raider squadron and a detachment of marine veterans.

My troops were represented by Dark Angels whilst my opponent fielded Blood Angels.

Each of us set up four objectives within our table half and then deployed our troops. We then made a barrier across the centre of the table so we couldn't see our enemies deployment. 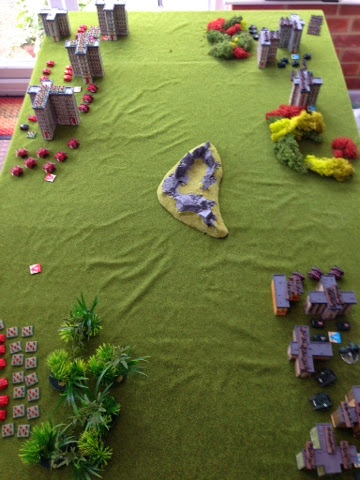 The above picture was the general battle layout... with the following squads located around each of the main objectives (points are also awarded for holding objectives).... 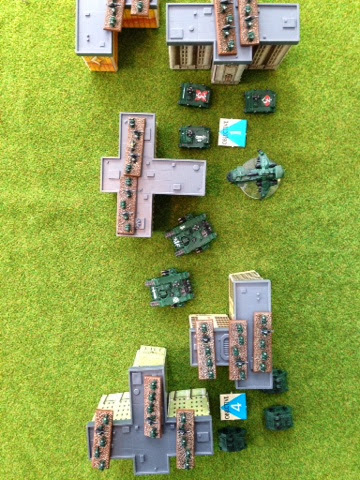 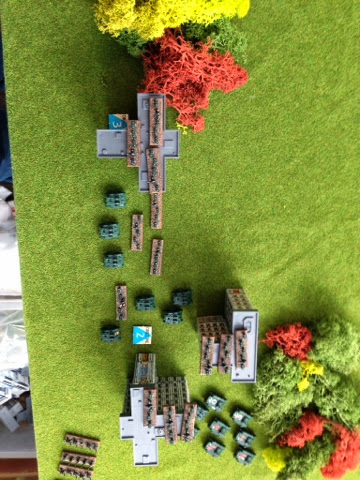 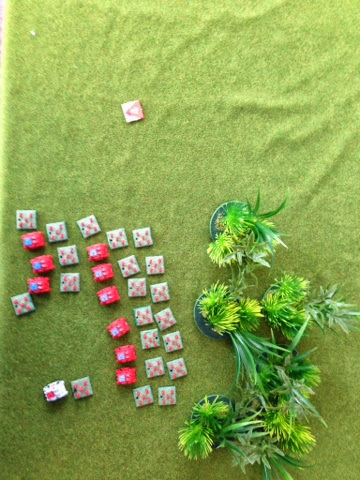 After set up the Troops are issued the following orders in the form of small counters; there are three to choose from:

The counters are hidden during deployment then revealed at the beginning of the turn. Most of my non-devastators charged whilst the heavy weapons marines went onto first fire. My enemy won the iniative and took first blood by wiping out my entire land raider detachment with the combined fire of his land raider company. 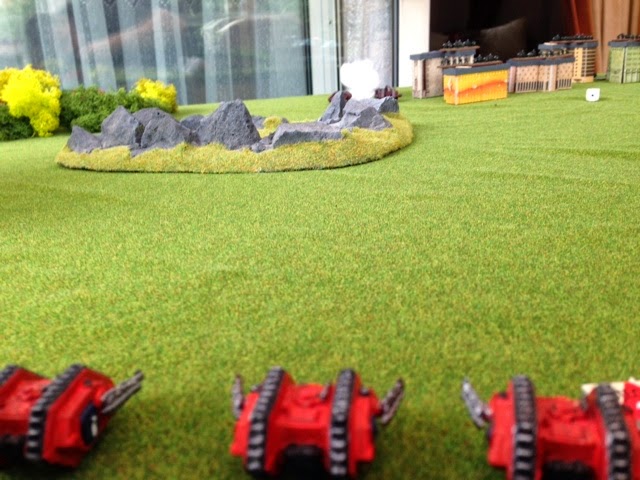 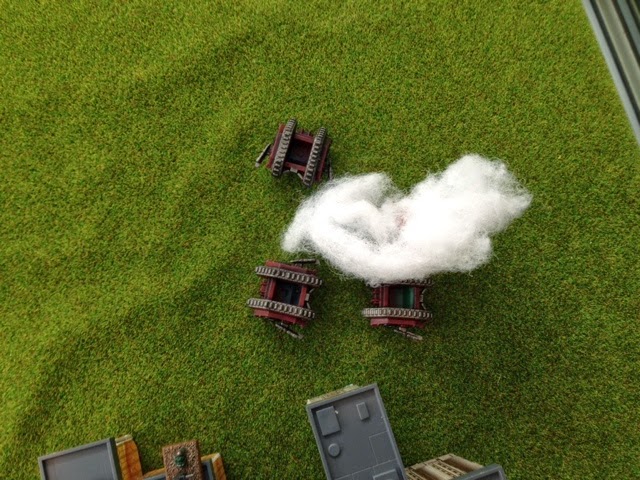 However this didn't deter me as most of my tactical company supported by the chaplain sped across the right flank whilst the Thunderhawk dropped the scout detachment into the middle of the blood angels battle line. 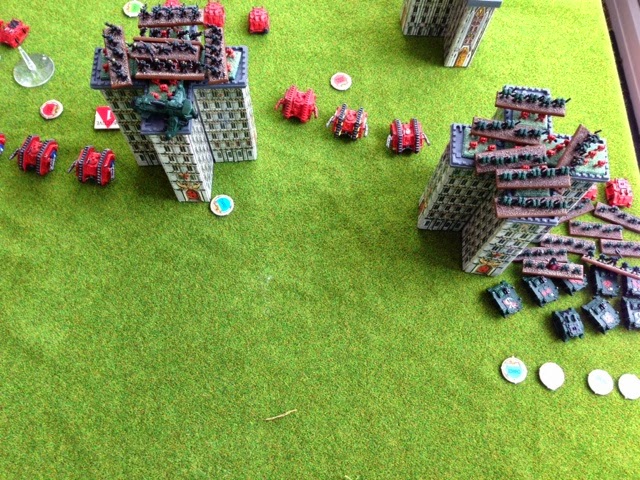 Everyone then ploughed into close combat with their chainswords whirring and bolt guns blasting.... 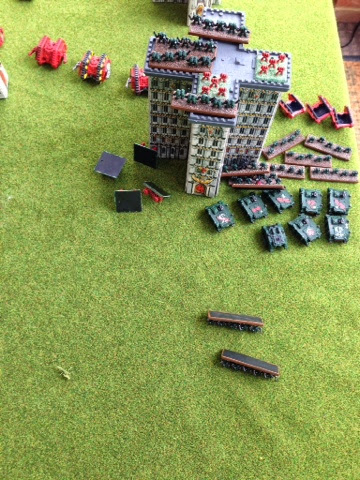 The melee was carnage and continued for a number of turns with scouts and assault marines butchering tactical marines by the bucket load. Then my nemesis deployed his veterans who started to sway the tide with their upgraded close combat stats. However the presence of my black armoured chaplain and their stalwart company commander held the sons of Caliban firm.

Meanwhile the Blood Angels heavy weapons continued to pick off stands in my deployment area. 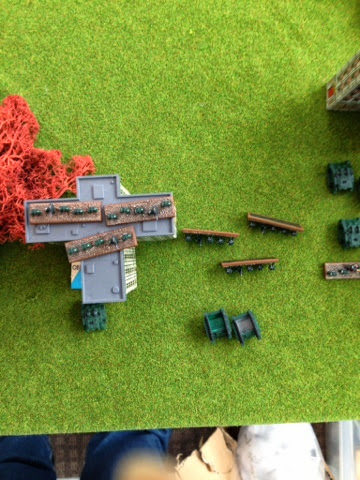 Annoyingly the mighty Thunderhawk whose ablative armour was designed to withstand the hellish pressure of atmospheric re-entry was felled by a volley of boltgun fire from a few space marines in a nearby building...pah, it haven't even fired its rockets! Well at least the scouts had dismebarked! 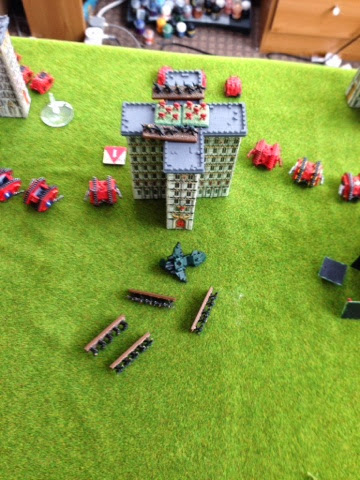 I didn't have much in the way of troops deployed on my left flank; but I decided to plunge the bone armoured Death Wing right into a full blood angels battle company...it was never going to end well for the sons of the Lion, but I had nothing else to do with them so I thought I'd see how much damage they could do before taking the secrets of the first legion to the grave with them.... 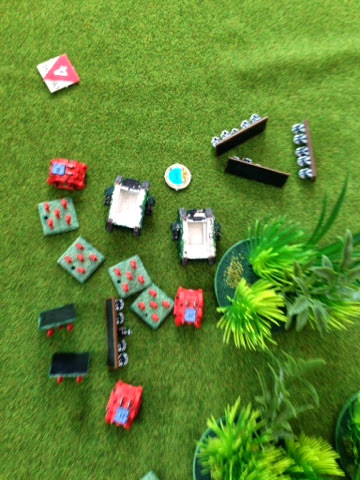 Despite the sideshows elsewhere on the battlefield the final decider come down to the huge melee on the right flank; and in a true show of escalation almost all available troops were committed to this punch up. Even those soldiers based further afield focused their firepower on gunning down survivors as they emerged from close combat.

The final result was:

I had won the game, it may seem like this was a large margin of victory but it was actually pretty close. I personally believe the Thunderhawk's early airborne assault had secured me victory as it allowed me to claim an additional objective early on.

We both thoroughly enjoyed the game and as we packed up we discussed what units we will be adding to our 1990s 6mm forces. Awesome!

Posted by LegioCustodes at 11:55