After the fun that I had with my test model last week I decided to take the plunge and paint up a full squad of 1989 era Terminators for use in the classic first edition of Space Hulk. 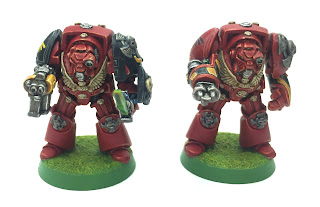 As per the test model I stuck with the bright red heraldry of the noble Blood Angels chapter of the Adeptus Astartes!

As these fellas appeared on the front cover of the Space Hulk box and both versions of the Space Crusade box art I felt they were the poster boys of the period (before the Ultramarines took over!) 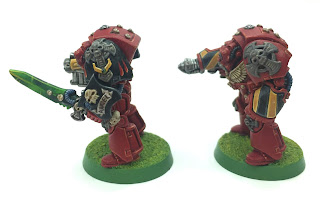 I stuck as closely as I could to the colours and iconography shown in the available art work of the period that I consistently used as reference material. 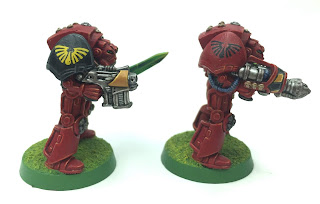 This included painstakingly painting hazard stripes on all of the Power Fists Gloves and the Heavy Flamer.

Additionally I sourced a set of the original 1989 Blood Angels decal sheets to apply the Chapter badge to each of the marines shoulder pads. 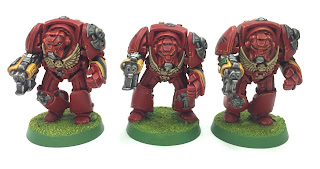 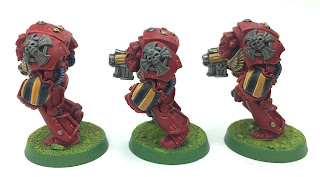 In order to pay homage to their era of origin and to distinguish the bright red of their Tactical Dreadnought Armour I painted their bases in the traditional Goblin Green!! Ahhhhh .... Nostalgia! 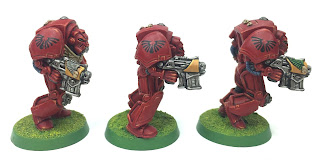 They just have such great detail to them and are absolutely bursting with character! Also there is something satisfying about the weight of having a metal model in your hand when painting!!

Now that I’m in the swing of retro painting I have already sourced a second Terminator Squad from eBay that I need to start working on!!

Posted by LegioCustodes at 15:07