Having fallen back in love with Space Hulk recently and having completed a new (old) Blood Angels Terminator Squad for this venerable game I decided to take the opportunity to revamp my Genestealer Cult as well. 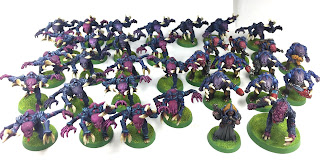 Followers of my blog will know that I have been gradually building this Force up over the last decade or so and as such it has a models that have been painted at varying stages in my own hobby development process/evolution. 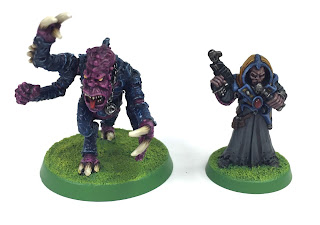 I couldn’t be bothered to completely repaint them all from scratch so I decided just to tidy them up with some extra highlights and deeper shading in order to tighten up the whole Force. 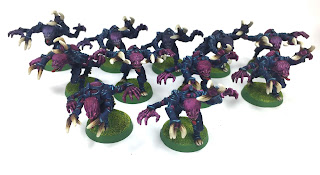 Additionally in order to match these models to my new Space Hulk Blood Angels I spent a whole weekend repainting their bases in the traditional 1980/1990s Goblin Green colour scheme (they were originally painted in a fairly dour black and grey). 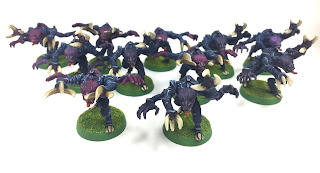 I know they are controversial but I actually found that these bright green bases really suited these models as they made the dark blue and purple colours pop a lot more. 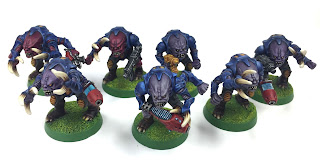 My governing rule here is that every model in the force must have been available between 1989-1992 with no exceptions as I really want them to reflect my favourite period in this wonderful hobby.

I must admit that I hated these plastic hybrids at the time... but the passage of 30 years has mellowed my feelings and I have actually found them to be quite endearing and surprisingly versatile.

I have also supplemented these basic plastics with a few metal hybrids and purestrains along with an original Patriarch and Magus model to act as the Commanders of the growing Cult.

Overall I’m really pleased with the look of the Cult Force that I have put together so far and I think they make a great foe for my newly recruited Blood Angels to fight.

It is my goal to field both armies in a combined campaign of multiple games systems including Rogue Trader, Space Hulk, Space Crusade And Advanced Space Crusade!

I reckon that this will be great fun and give me a chance to see both forces develop their own back stories and character! I can’t wait!

Posted by LegioCustodes at 13:41