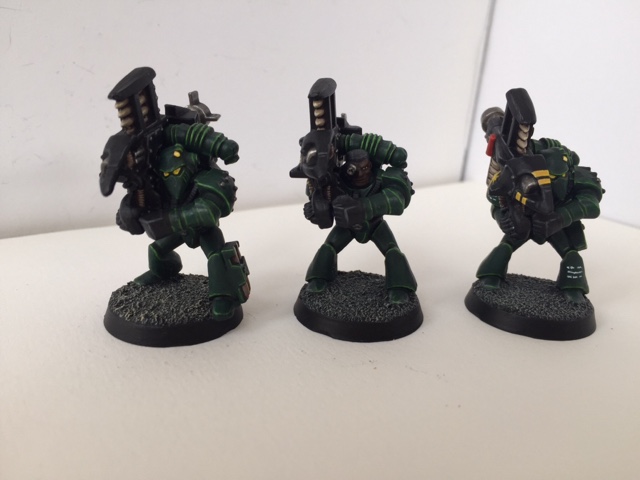 I've been meaning to paint these guys for a while as I sometimes use my Rogue Trader Army to represent the original Salamanders Legion in games of 30K/Horus Heresy and so I need the additional heavy weapons (including a suitably armed sergeant) to make my Heavy Weapon Squad legal. 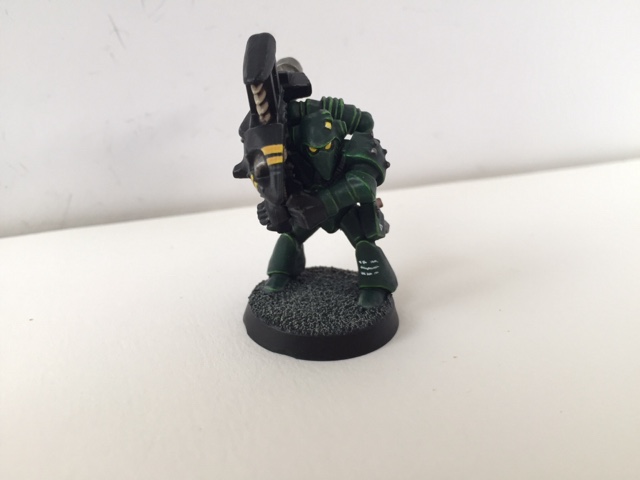 Obviously I have painted these guys up to fit in with my existing Salamanders Force and as ever I have tried to give each trooper some degree of individuality in line with their RT forebears. This first guy has a pair of yellow kill markings (stripes) on his missile launcher and a bit of individual heraldry on his shoulder pad in the form of a stylised star. 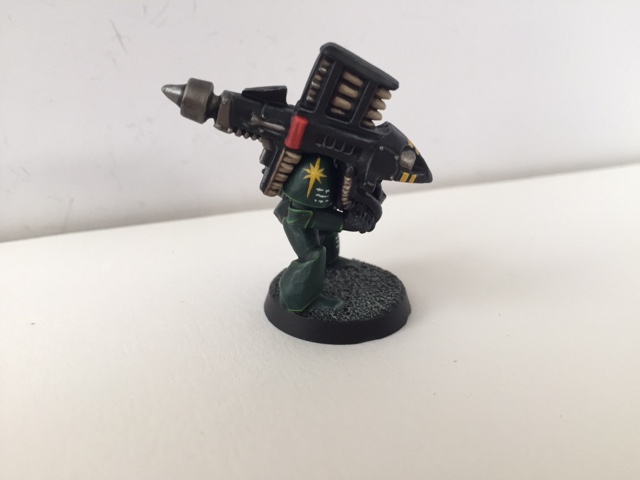 The next figure is the squad's glorious sergeant... 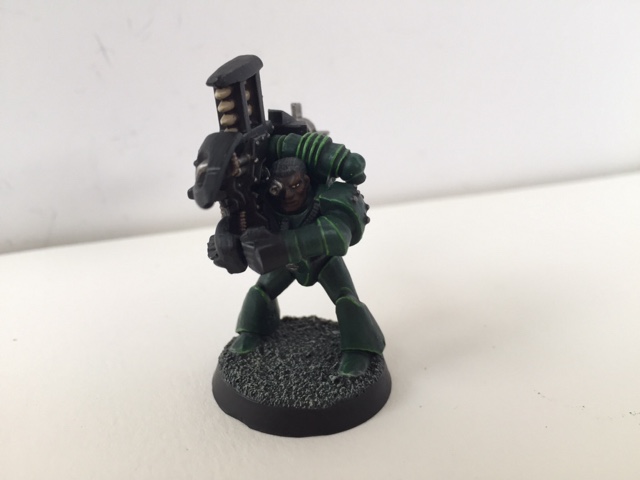 Both his missile launcher and his shoulder pad are adorned with his rank insignia as befits his elevated status.

The bare headed sculpt from the RTB01 boxset is really crap to be honest and I find it hard to do anything meaningful with it, nonetheless I have done my best with this squad leader. 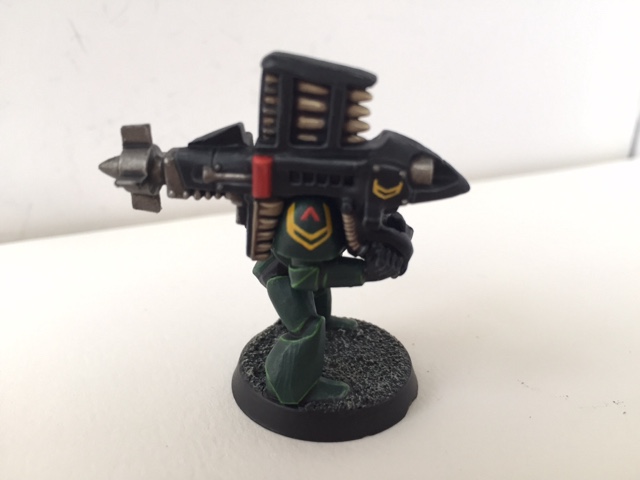 The third guy is just another basic heavy-trooper who is carrying a couple of spare missiles on his leg. 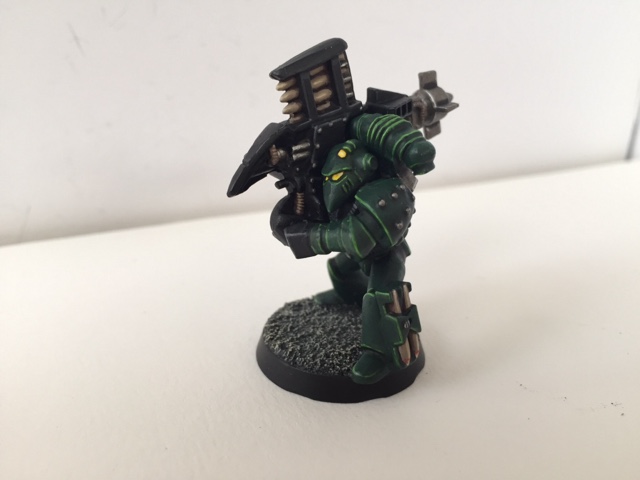 For his shoulder markings we have the original Salamanders Devastator symbol (a yellow starburst) with a classic Rogue Trader 'KIL' marking painted over it (could he be more 80s). 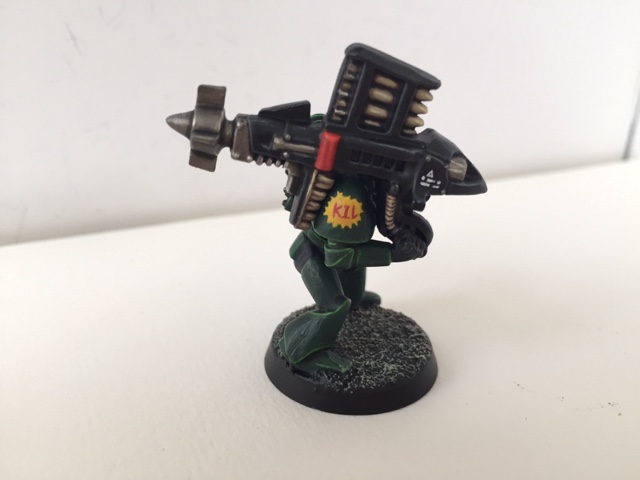 A new technique I have adopted recently is having a separate project/model on the go that I can play around with while the paint/washes/glue are drying on my main endeavors.

So while I was painting these devastators I also had this fellow ticking over on the back burner... 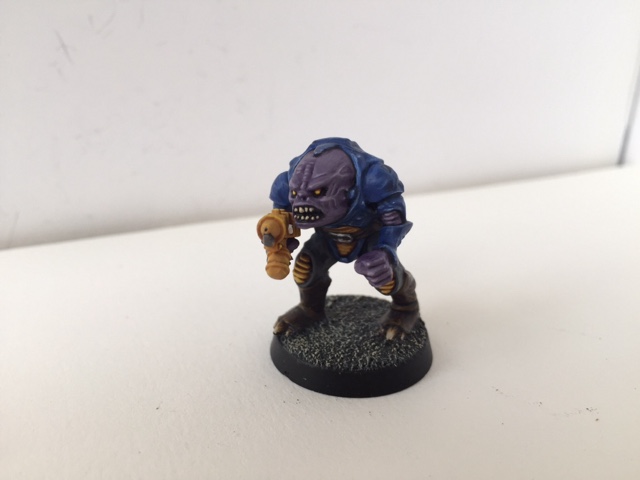 He is a classic, plastic 'stealer hybrid from the 1989 Space Hulk supplement 'Genestealer' and although I never really liked this sculpt back in the day I have to say that I have warmed to it of late. I already have a few of these chaps in my growing Genestealer Cult so he will be joining them to fight against Inquisitor Athena in my ongoing campaign. 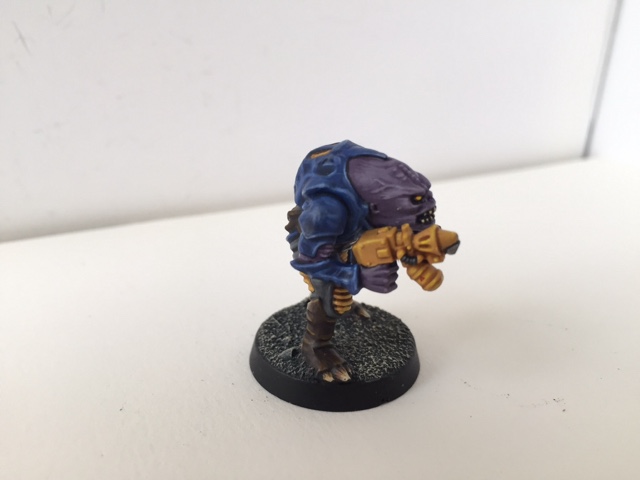 I have chosen to give this guy only two arms (as opposed to the more common three or four) and equip him with a very retro hand flamer which should offset his low-ballistic skill and be useful in immolating the lackeys of Terra.

Overall not a bad rate of production and I really like how the models have turned out. I'm looking forward to getting them on the table for a bit of classic wargaming action!

Let me know what you think.

Posted by LegioCustodes at 10:50