Yet another Five Iron Warriors for Horus Heresy gaming!

This week I decided to make my first Iron Warriors Tactical Squad for 30k into a larger 20 man/model variant in order to maximise the sheer destructive potential of so many boltguns firing in unison. 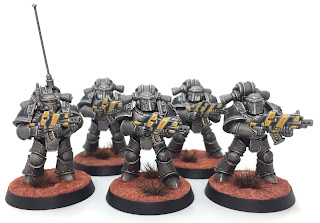 I used the same colours, techniques and basing methodology as on the previous batches in order to maintain a general sense of consistency throughout the Force. 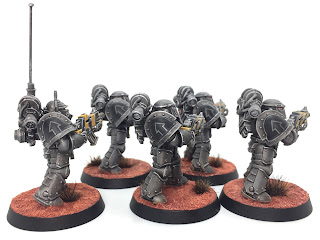 Again the hazard stripes took a while to complete but they were well worth it in the end, nicely breaking up the monotone grey and black that is prevalent elsewhere on these fighters. 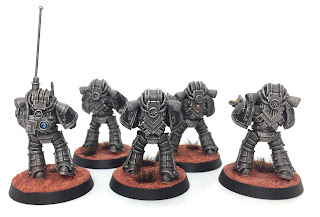 I included a vox operator in the squad as the model looks fairly cool and also has some ‘in game’ benefits.

As the original resin aerial had an air of fragility about it I removed it with my model clippers and then replaced it with a simple sewing pin!! 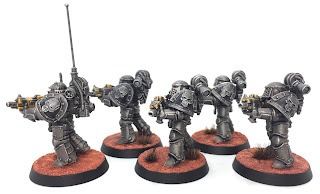 Once again I am really happy with these guys and the industrial look that I have achieved with them.

Next up I’ll finish off the final five men to bring the squad to maximum strength!
Posted by LegioCustodes at 11:02