In a bid to keep myself motivated and productive in terms of overall miniature output I have become something of a hobby butterfly in 2017 and I am bouncing between a variety of different projects in order to maintain my interest. So after last week's foray into the exciting world of dreadnoughts I have switched over to another long term project in the form of attempting to expand my slowly growing Genestealer Cult. 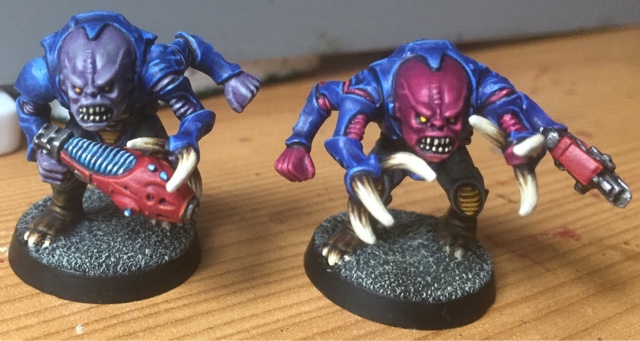 This time I have painted up two more first/second generation hybrids for the cult. I have used the original 1989 plastic hybrids from the expansion to the original Space Hulk entitled 'Genestealer'. Regular readers may remember that I have actually painted up a few of these old school plastics before. 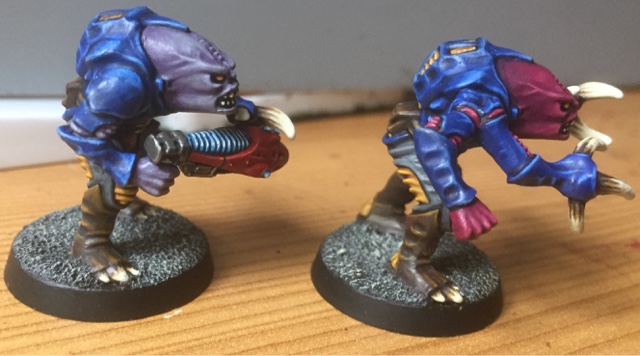 Now it must be said that when I first saw these monopose models all those years ago I wasn't impressed, in fact I thought they were over-simplistic monstrosities that looked more deformed than terrifying; and to be honest these feelings didn't change massively after I'd painted the first couple of models.

However for some reason this has changed of late and they have started to grow on me! 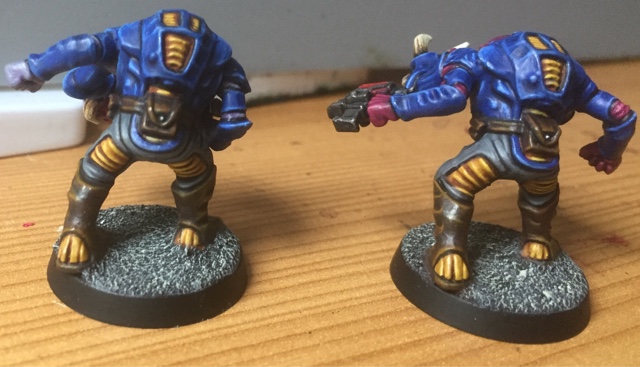 I have found with a bit of variation on the arm/weapon options and some different paint jobs these venerable minis can be shaken up a bit in order to provide a fairly good looking force for the table top. For these latest two I created a degree of variety by painting the fleshier parts of the hybrids with two distinct shades of purple in order to show that these are individual creatures as opposed to uniform troops like Space Marines. 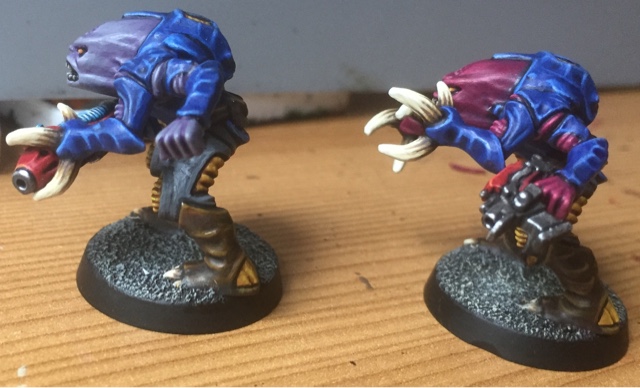 For the weapon choices I went for some classic Rogue Trader ranged weapons in the form of a Plasma Gun and a Bolt Pistol from the Ork weapons sprue of that period. I painted these a nice bright red in keeping with the contemporary colour styles that were prominent in the late 1980s/1990s.

When choosing equipment options for this particular force I must be clear that I'm not massively interested in selecting awesome game winning combinations but rather those weapon choices that fit in with the image of a ragtag bunch cultists seizing firearms from wherever they can get access to them.

I have quite a large cult force now and pictured above are all of the plastic-style hybrids that I have added to it so far. As I said previously these old models have really grown on me of late and I am sure I will paint up a few more in the near future.

Posted by LegioCustodes at 15:25