For me it's been a pretty good year, I have had multiple articles published in Wargames, Soldiers and Strategy magazine and I have got a book deal with Osprey Games to publish a set of Wargames rules, both of which are sources of pride for me. 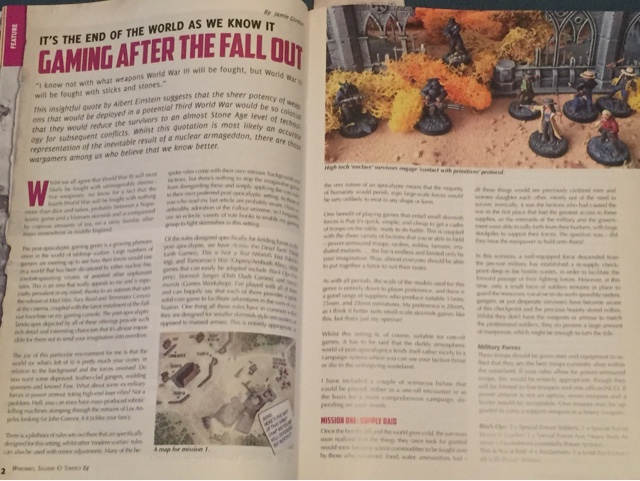 Additionally I got my first proper painting commission...and from none other than Joe McCullogh, award winning author of FROSTGRAVE! This was to paint up two full warbands for a project that he is putting together! Again this was a great achievement for me!

Anyway here's the year in pictures! 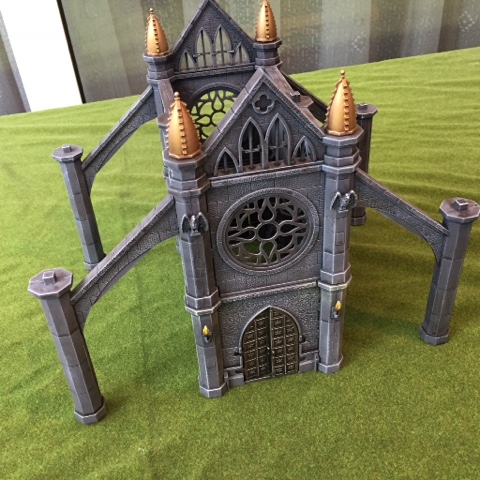 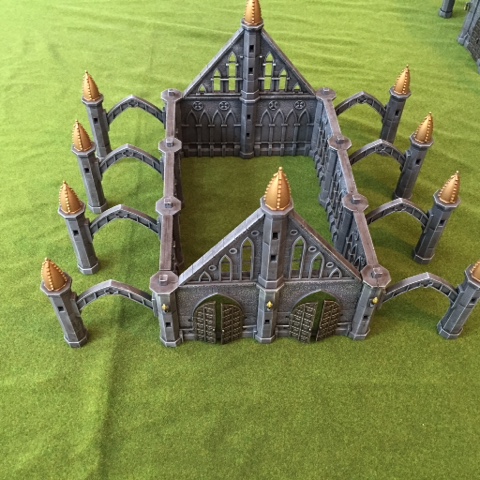 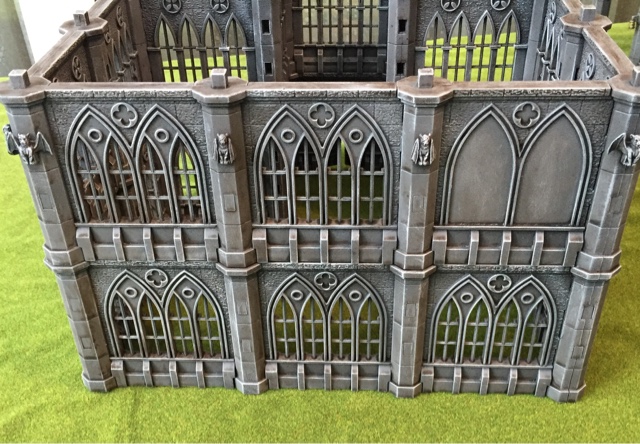 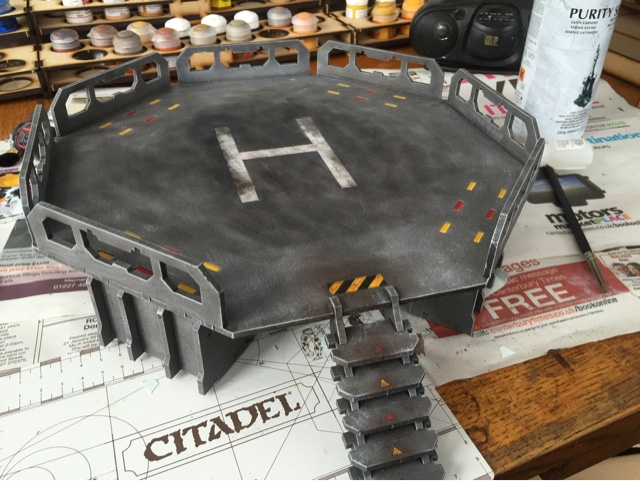 Early on in the year I decided to focus on producing some extra terrain for my models to fight over and so I set about churning out various Pegasus Gothic ruins. These boxed sets are ideal for my gaming taste as the ruins would fit comfortably into the settings of Mordheim, FROSTGRAVE or even the grim darkness of the 41st Millenium. However I have since found that these are slightly fragile kits and a number of the 'bobbles' on the conical golden roofs have broken off in transit... Annoying!!

I then took a leap into the brave new world of MDF terrain with the landing pad pictured above! Prior to building and painting this item I was a bit sceptical about MDF, but this project allayed all my fears and I am now a convert! Thus I have a load more bits of MDF scenery waiting to be constructed on my paint station. 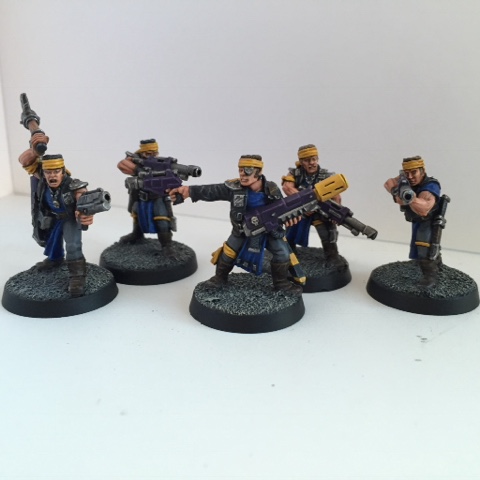 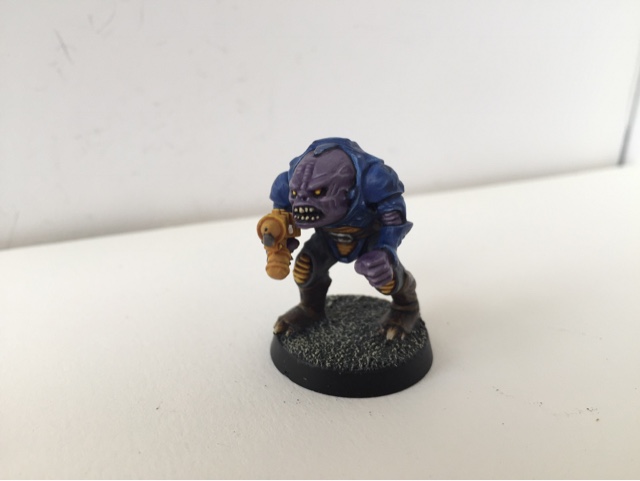 Next up I decided to expand my genestealer cult with a few more Necromunda Orlocks destined to be used as brood brothers and a plastic hybrid from the 1990 'Genestealer' expansion to Space Hulk.

This project choice was almost precognitive as a few months later GW released their 'Overkill' boxed game which brought the exciting forces of Genestealer Cults back onto the centre stage of the 40k setting! I have to say that these new sculpts for the Genestealers are beautiful and I shall try to paint some in 2017! 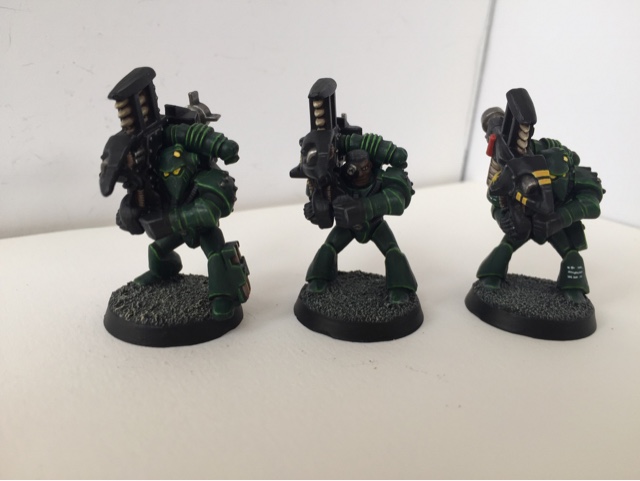 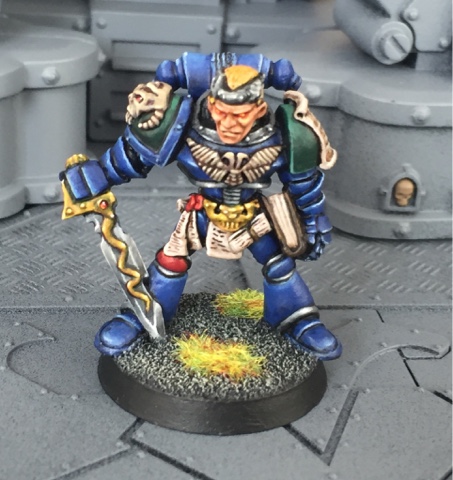 Obviously I am a Space Marine fanatic at heart and so I couldn't go through an entire year without painting up at least a few of these power armour clad badasses! In this case I added to my Rogue Trader Salamanders army with a few heavy weapons troopers and a librarian.

I am really proud of the Librarian as it was my first attempt at non-metallic metal and I think the silver and gold turned out nicely! It's something I need to practice more I think. 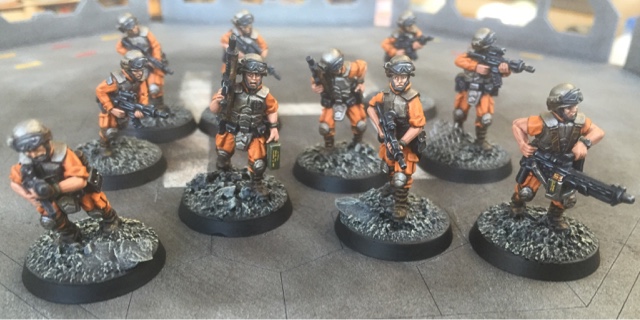 After losing months of my life to playing Fallout 4 on my Xbox One I was sucked well and truly back into the world of the post-apocalypse and so I set about sourcing, converting and painting some troops for use in the Wasteland.

I started with some Brotherhood of Steel Knights in combat armour (top) and then expanded this with a few NCR Rangers in patrol armour.

Fallout is a project that I keep coming back to and I have a few things up my sleeve for the New Year! 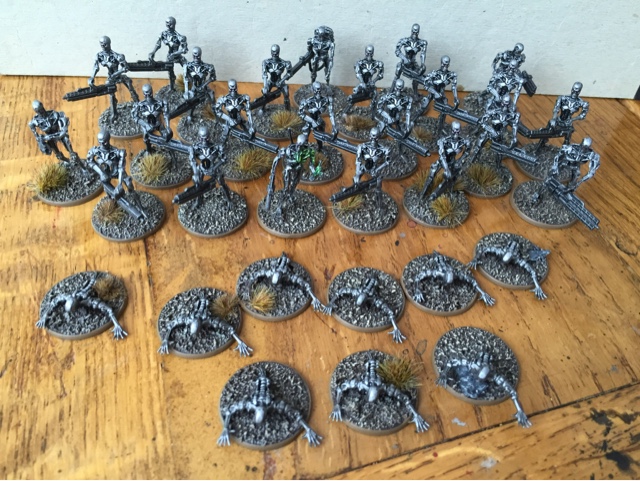 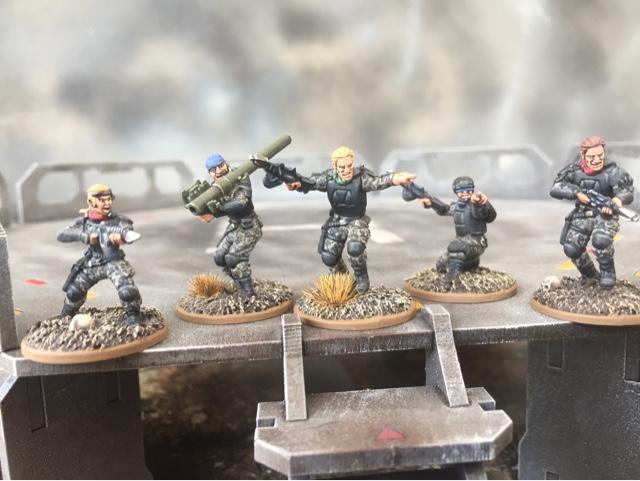 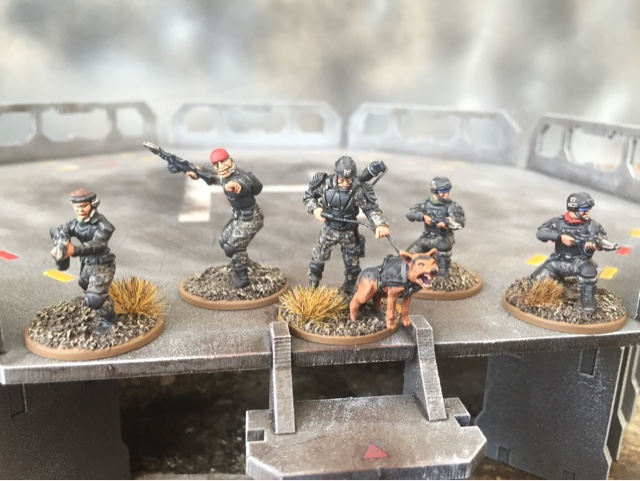 As ever my partner has been highly supportive of my hobby throughout the year and so I painted up a load of the models from the 'Terminator: Genisys' boxed game that she bought me as a gift.

Above we have a load of T-800 endoskeletons followed by a squad of human resistance fighters. I love these models and I love the game so a few more of these will be getting painted up soon. 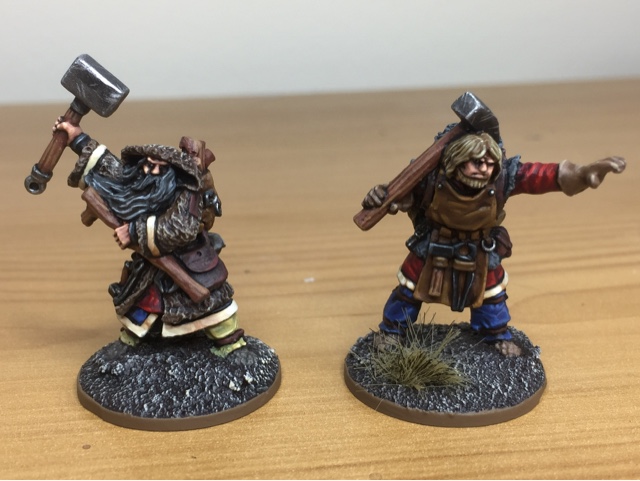 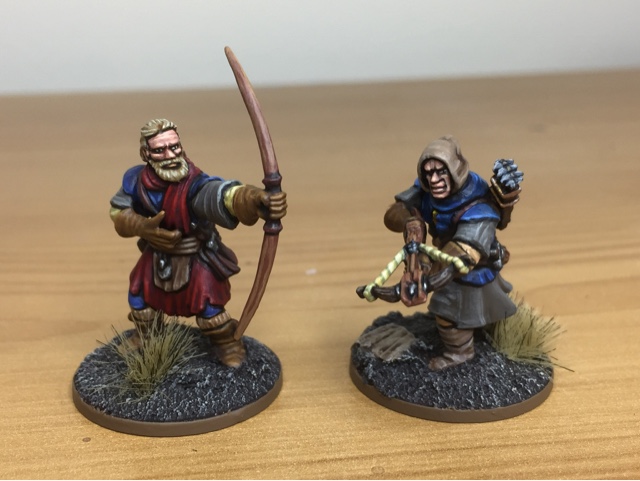 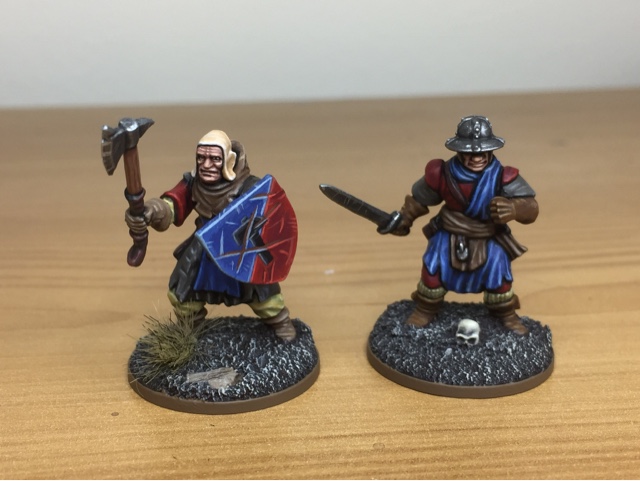 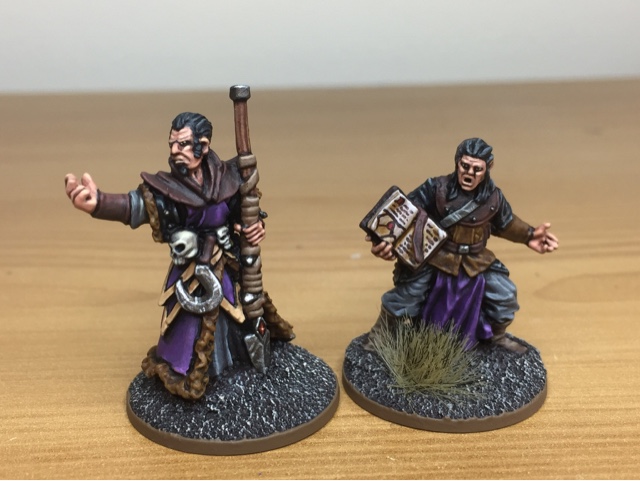 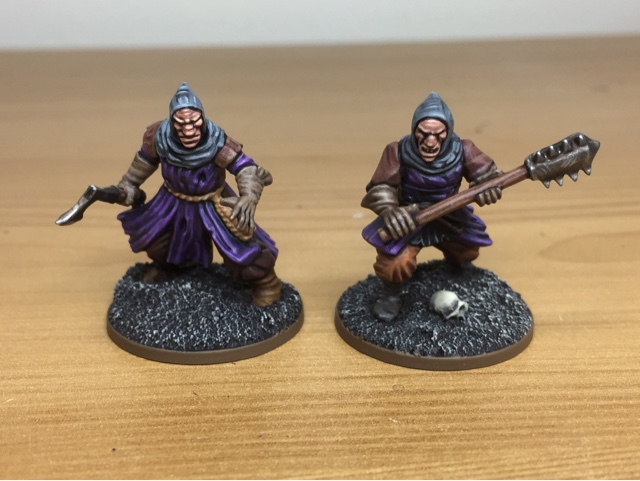 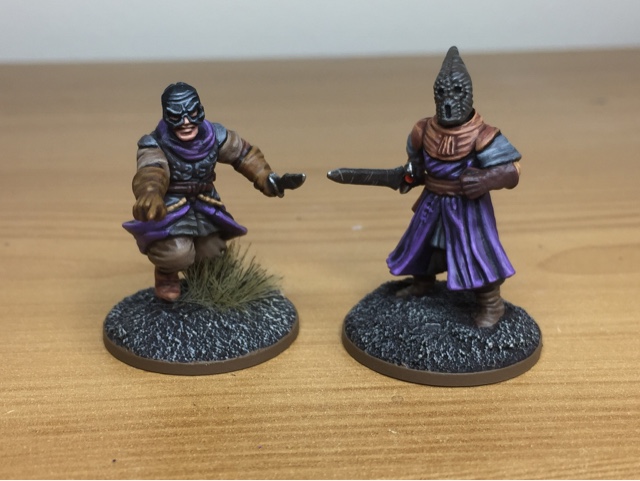 Later in the year my FROSTGRAVE commission ended up taking a lot of my time and I spent ages trying to get these models just right. I think they look pretty good and hopefully the guys at Osprey Games are happy with them. 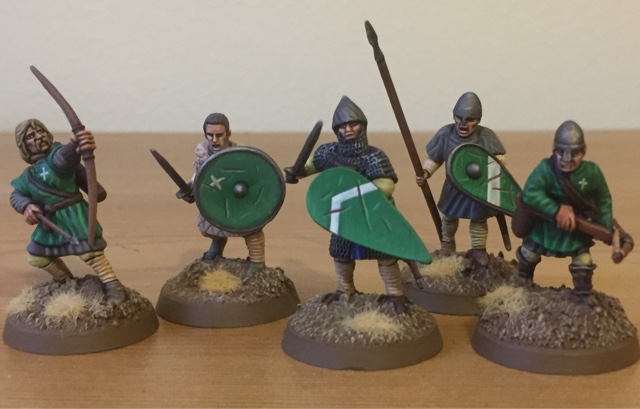 I also decided to push myself out of my comfort zone by painting a few historical figures... namely the above assortment of Norman era combatants! These are completely different to my normal model choices and have provided a really interesting challenge for me. I have to say if you ever lack hobby 'mojo' then it's worth doing something completely different to your usual projects... It is really rather invigorating.

Gamingwise I have also had a good year; my Rogue Trader campaign with my girlfriend has progressed nicely and the adventures of Inquisitor Athena have proved great fun (and very popular). I managed to play a full Necromunda campaign with my mate which was amazing fun and we are looking at recreating this again soon. I have also set up a gaming group focussed on playing '40k Kill Team' and our inaugural meeting was a great success a few weeks ago, so hopefully this will grow in 2017!

Sadly I missed BOYL/Oldhammer day this year which was gutting, but I'll definitely be there for 2017 (I think I've already got some games with JB (Asslessman) lined up!

Posted by LegioCustodes at 15:31