So having finally finished my Iron Warriors Squad last week I decided to take a break from painting gunmetal grey and revisit one of my other power armoured forces... Namely the blue clad warriors of my ever expanding Crimson Fists army!

Having subscribed to Conquest magazine last year I have had a steady influx of new Primaris models arriving on my doorstep every month that I haven’t really gotten around to painting this far. 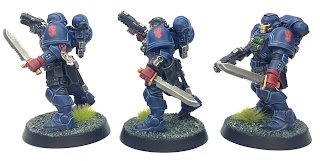 In light of this I finally broke out three of the ‘easy build’ Primaris Reivers that have come as part of this subscription and started to paint them up as Crimson Fists.

Overall I really enjoyed painting these guys; I do love the clean aesthetic of the Primaris models and the Reivers do look particularly cool with their skull masks and massive knives.

In truth I’m not sure if they’re going to be much use in games but I’ll probably paint up another two Reivers in order to make these guys up to a legitimate squad choice.

Posted by LegioCustodes at 14:42