So as 2018 draws to it’s inevitable close my mate and I decided to get together for a couple of friendly games of 40k over the extended Christmas break. 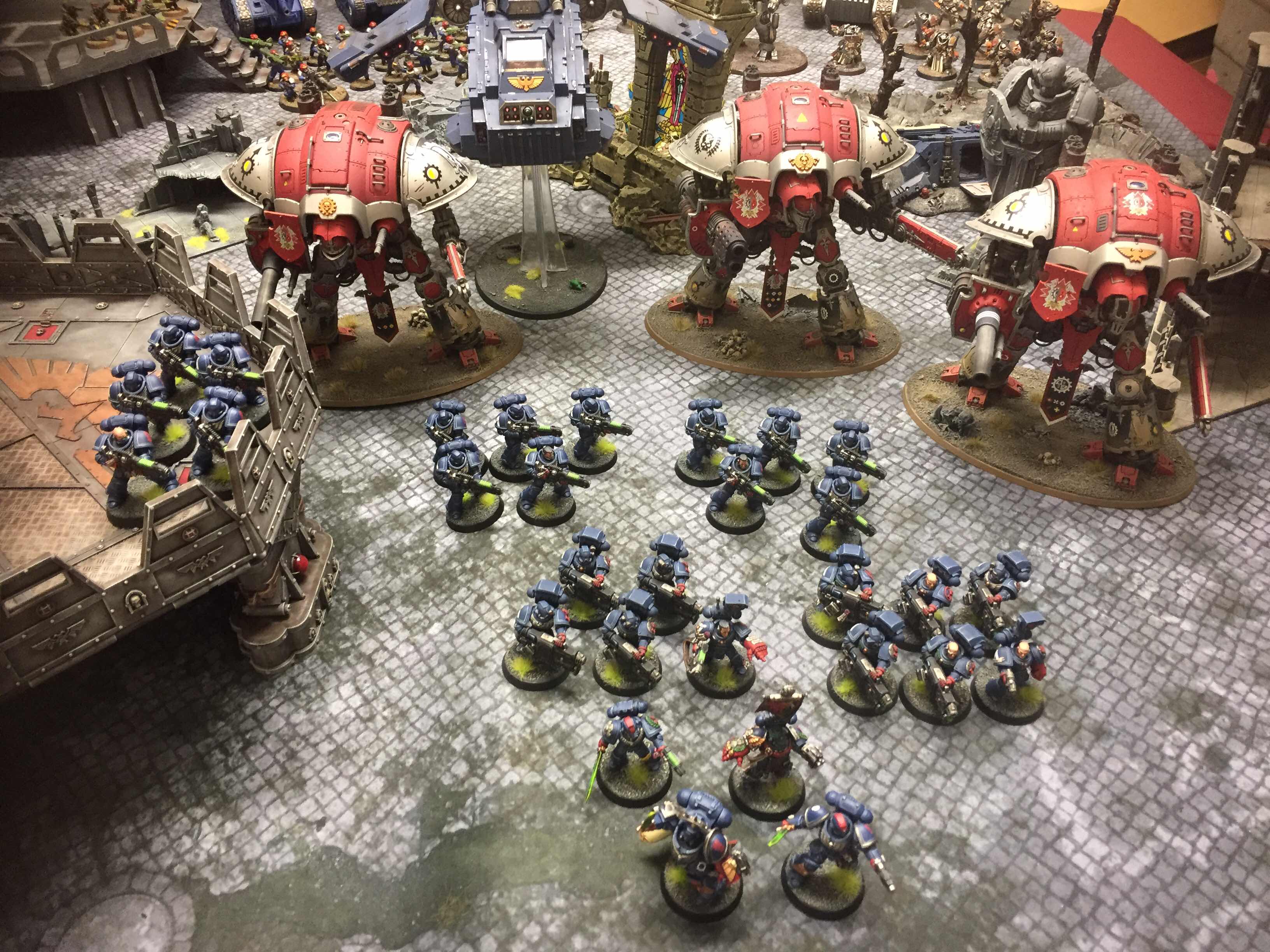 Our first game of the day was set at 150 Power Points each and so I went for a combined force of Crimson Fists Space Marines supported by House Taranis Imperial Knights. 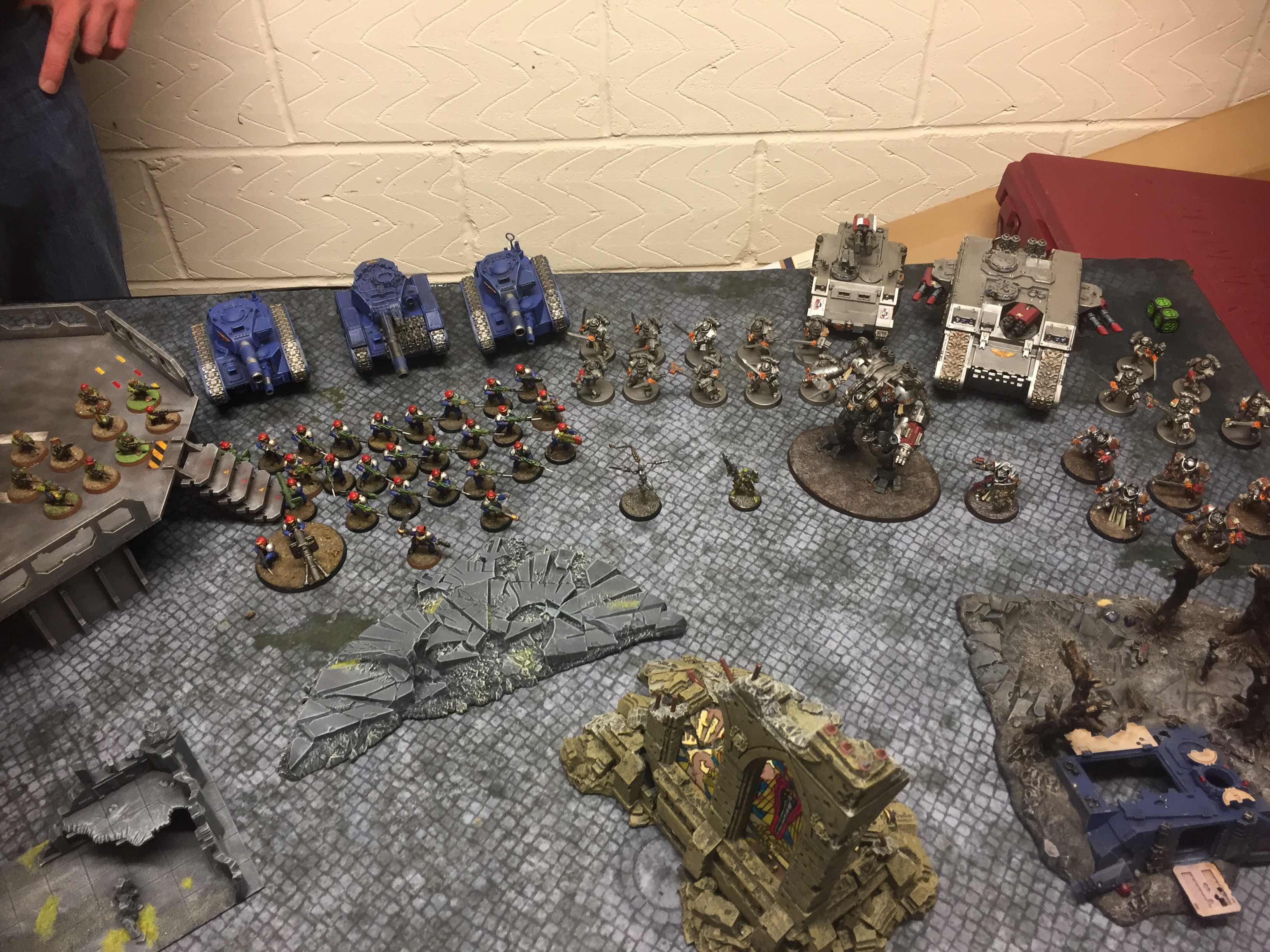 My opponent fielded a potent force made up from Grey Knights Space Marines and the stoic soldiers of the Imperial Guard. These were further supported by a tag team consisting of a Callidus and Vindicare Assassin. 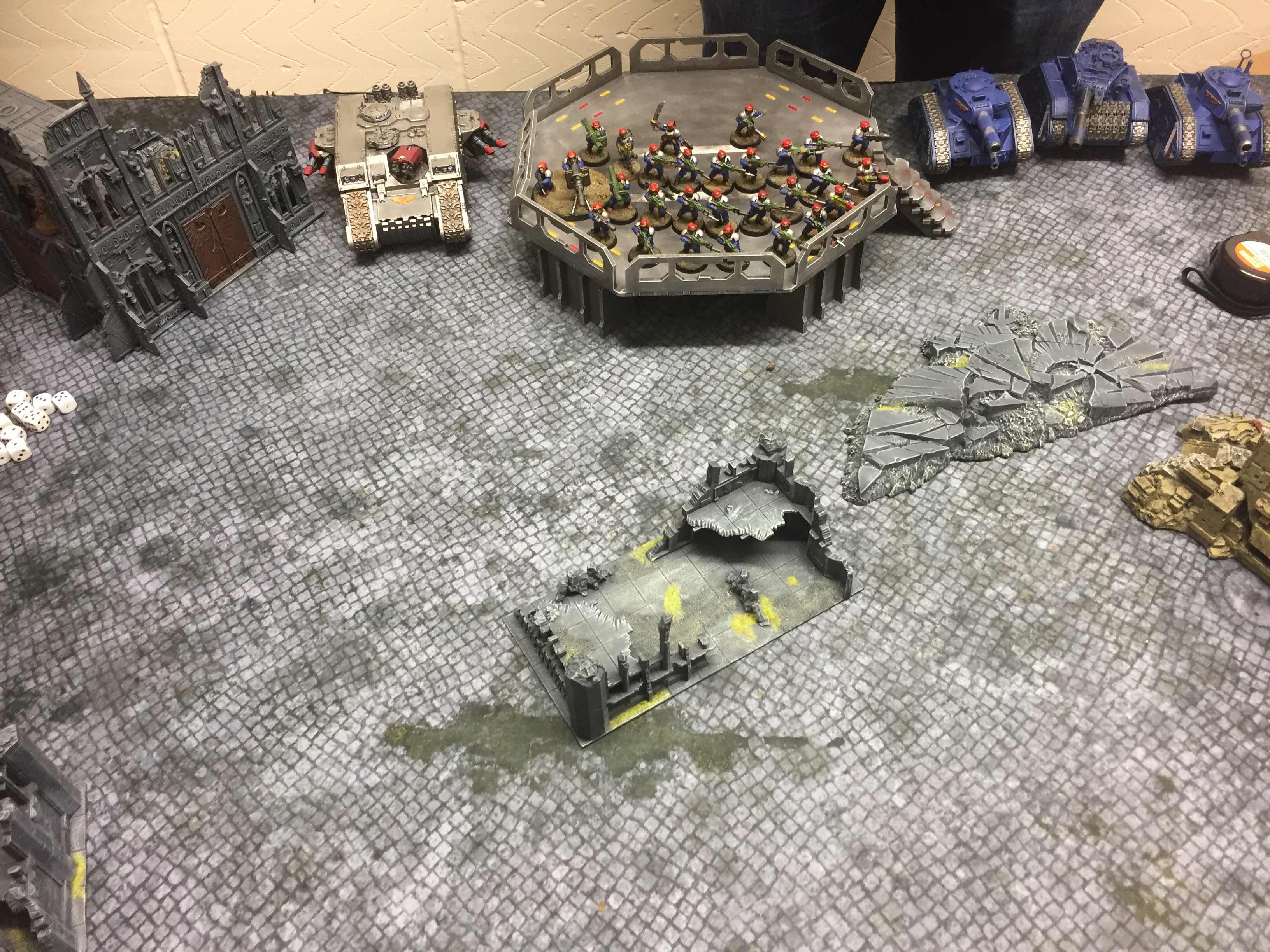 Having faced this horrific combination before I knew how deadly it could be and so I created a vast firebase made up of Knights and Hellblasters to support my rear! This was to be the unmovable rock I would use to anchor my force! 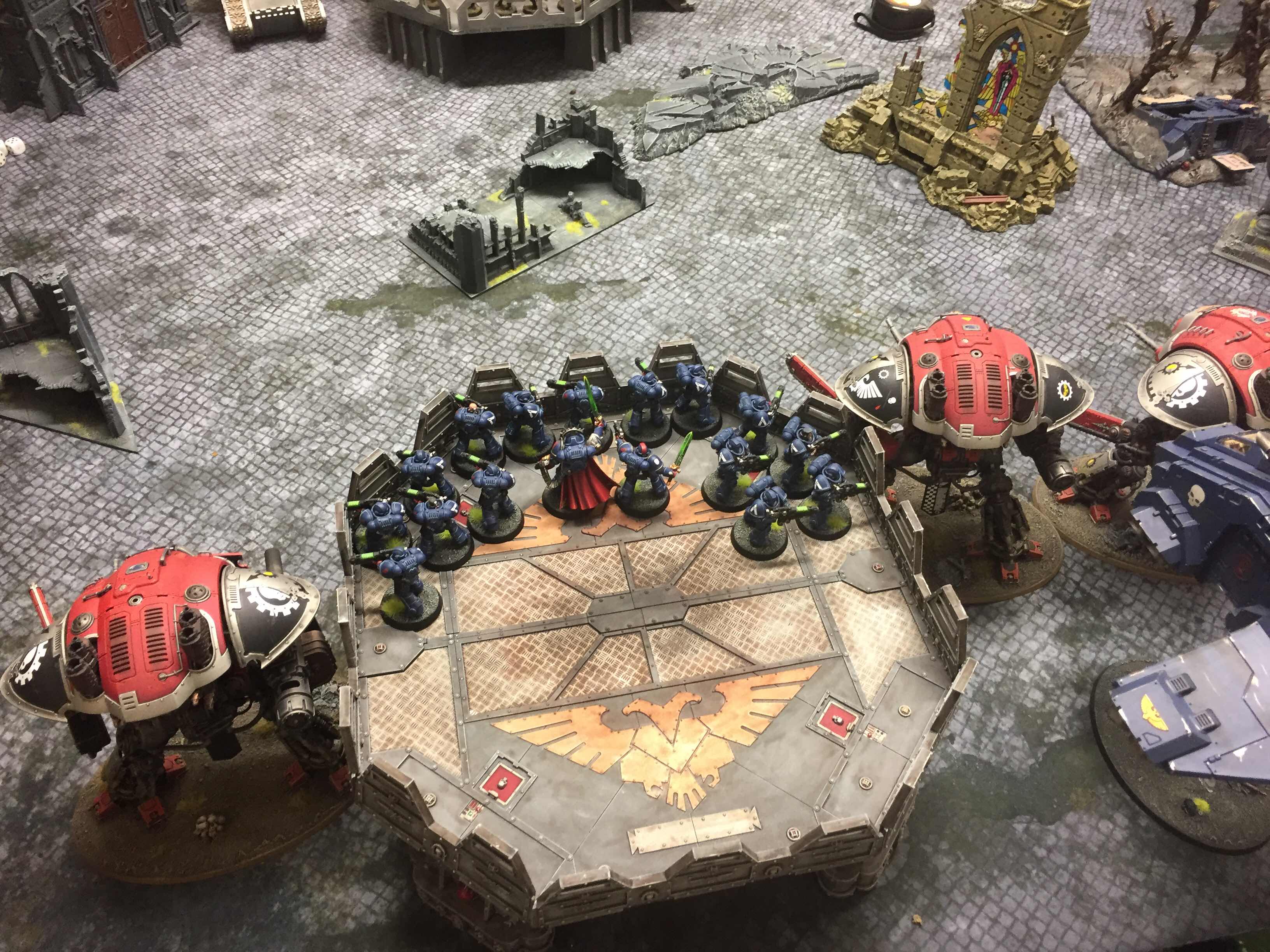 I then packed my Storm Raven with Characters and Devastators and flew them into my opponent’s deployment area. The Devastators were armed with Grav Cannons meaning that they were particularly potent against Imperial Guard vehicles and any infantry in power or terminator armour... perfect!

This proved to be quite a successful strategy and I was able to eliminate all of his ‘on table’ assets in my first couple of turns. This meant that when the deep striking Grey Knights reserves subsequently arrived later in the game I was in a position to butcher them piecemeal.

In the end I won the game having only lost three models. 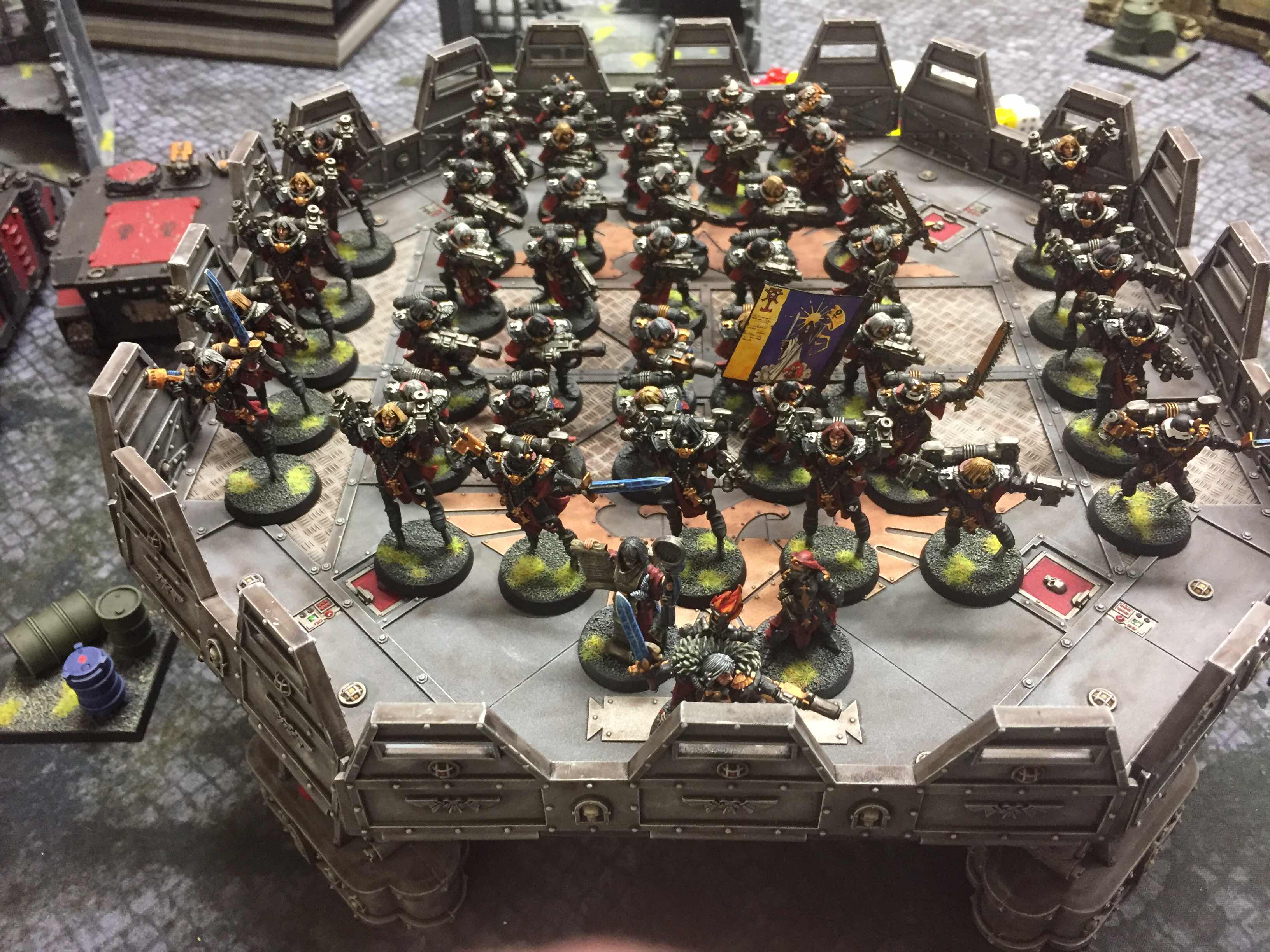 For our second battle we went for a much smaller 60 Power Point game in which I fielded my Sisters of Battle army using the new rules from the Beta Codex that has just been published in Chapter Approved 2018. 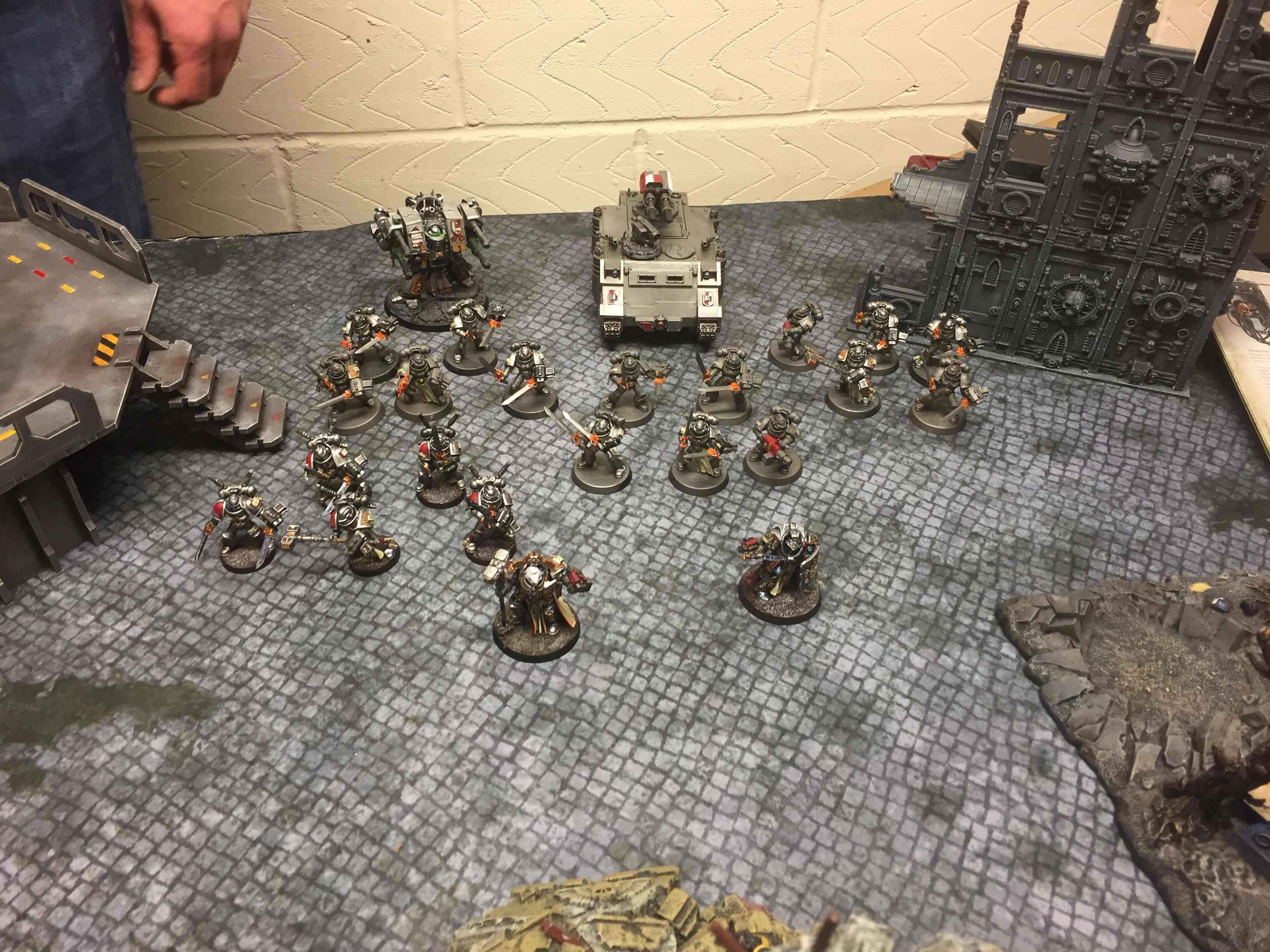 This time my opponent utilised an army made up solely of Grey Knights, that majority of which would be deep striking. 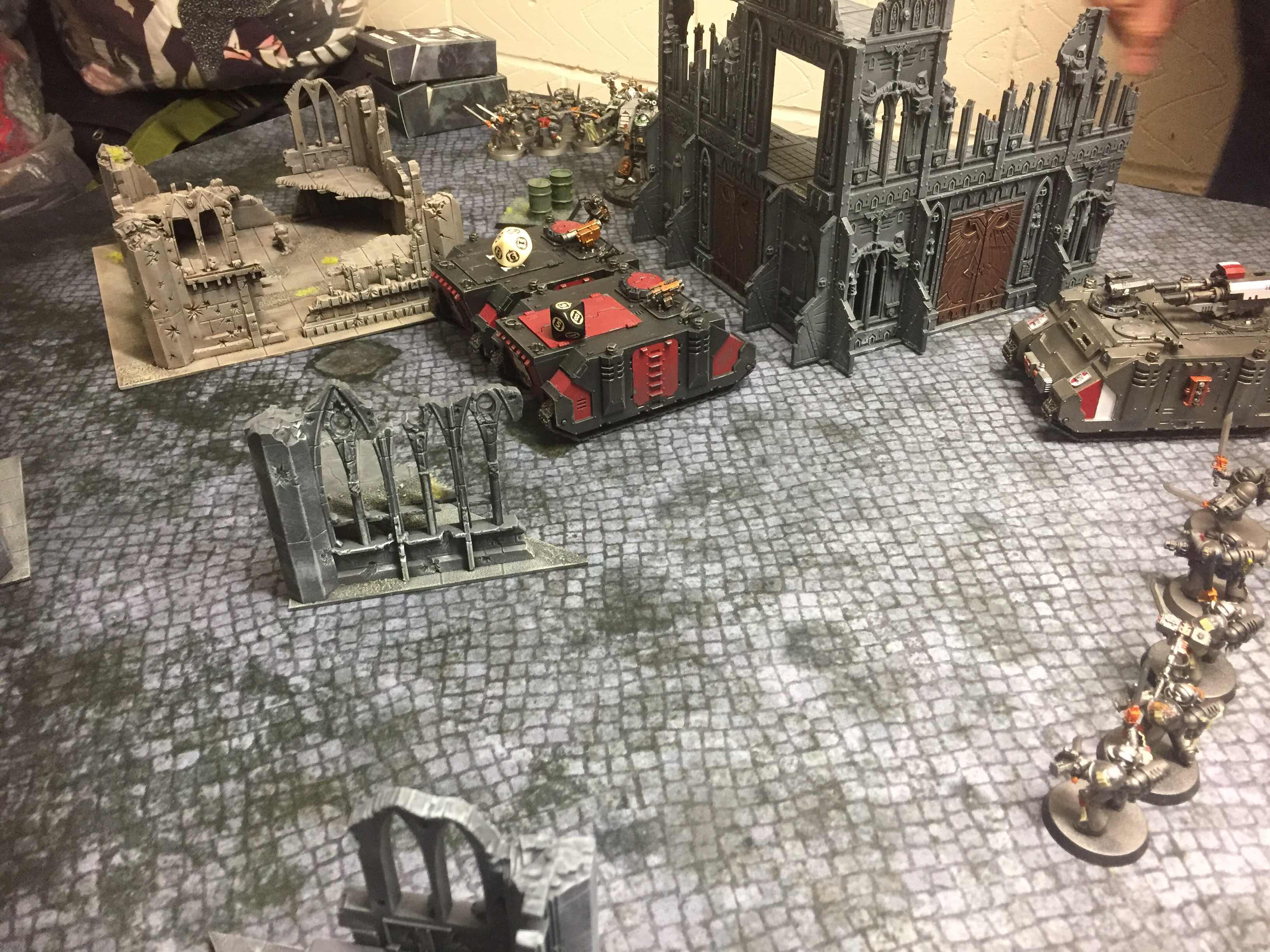 Realising that under the new rules the Battle Sisters are masters (or mistresses) of the short range firefight I quickly ascertained that I had to close ground quickly and on my own terms in order maximise this potency. 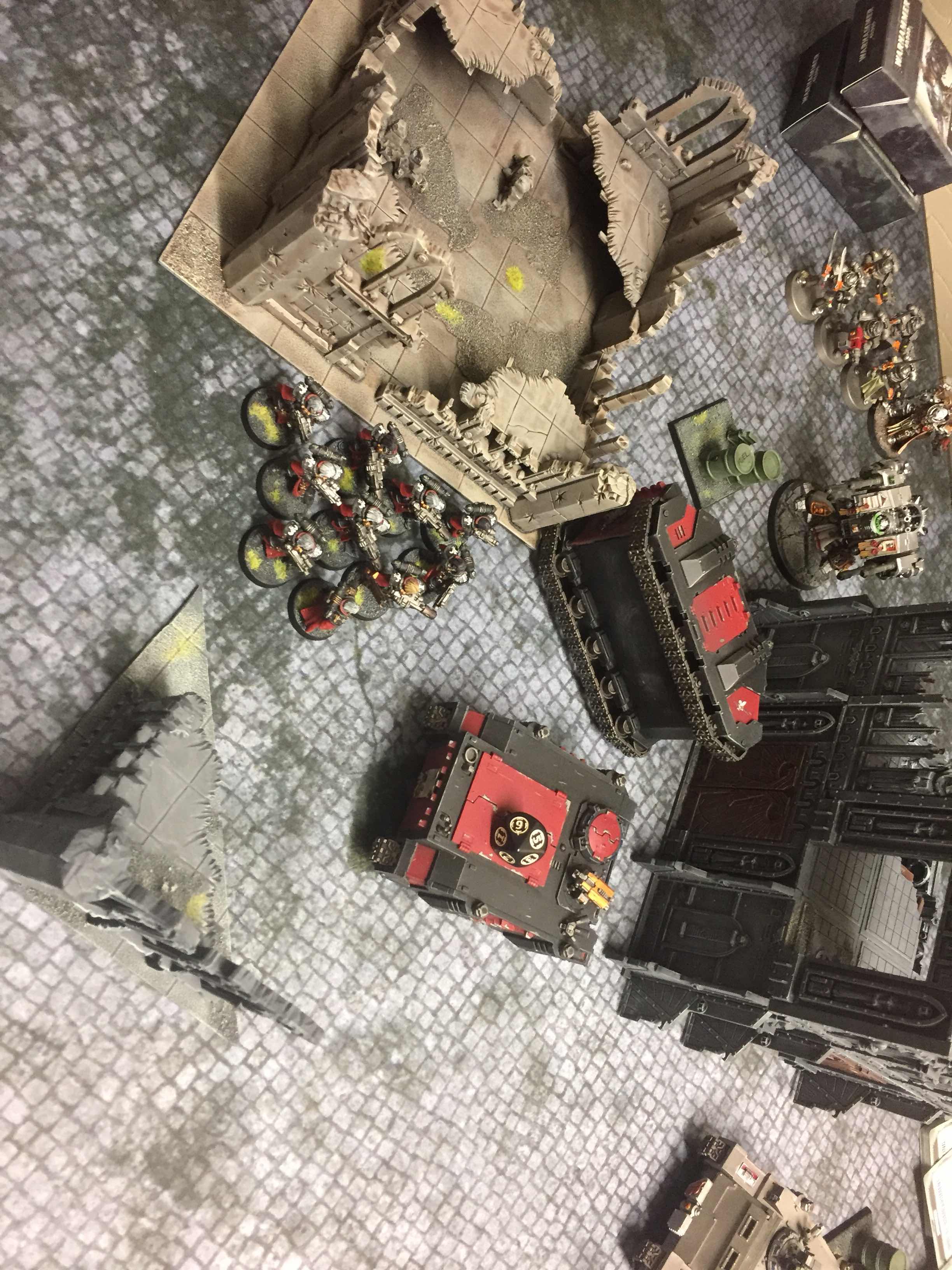 Obviously these units speeding across the open terrain were tempting targets and thus drew a lot of firepower from the Grey Knights. They also drew a lot of psychic attention from Titan’s finest, however the Battle Sisters are actually quite a potent anti-psyker force now. Many of their inherent skills, Acts of Faith and Stratagems are useful in taking the edge of an enemy’s psychic talents, something that was highly useful in countering the Grey Knights. 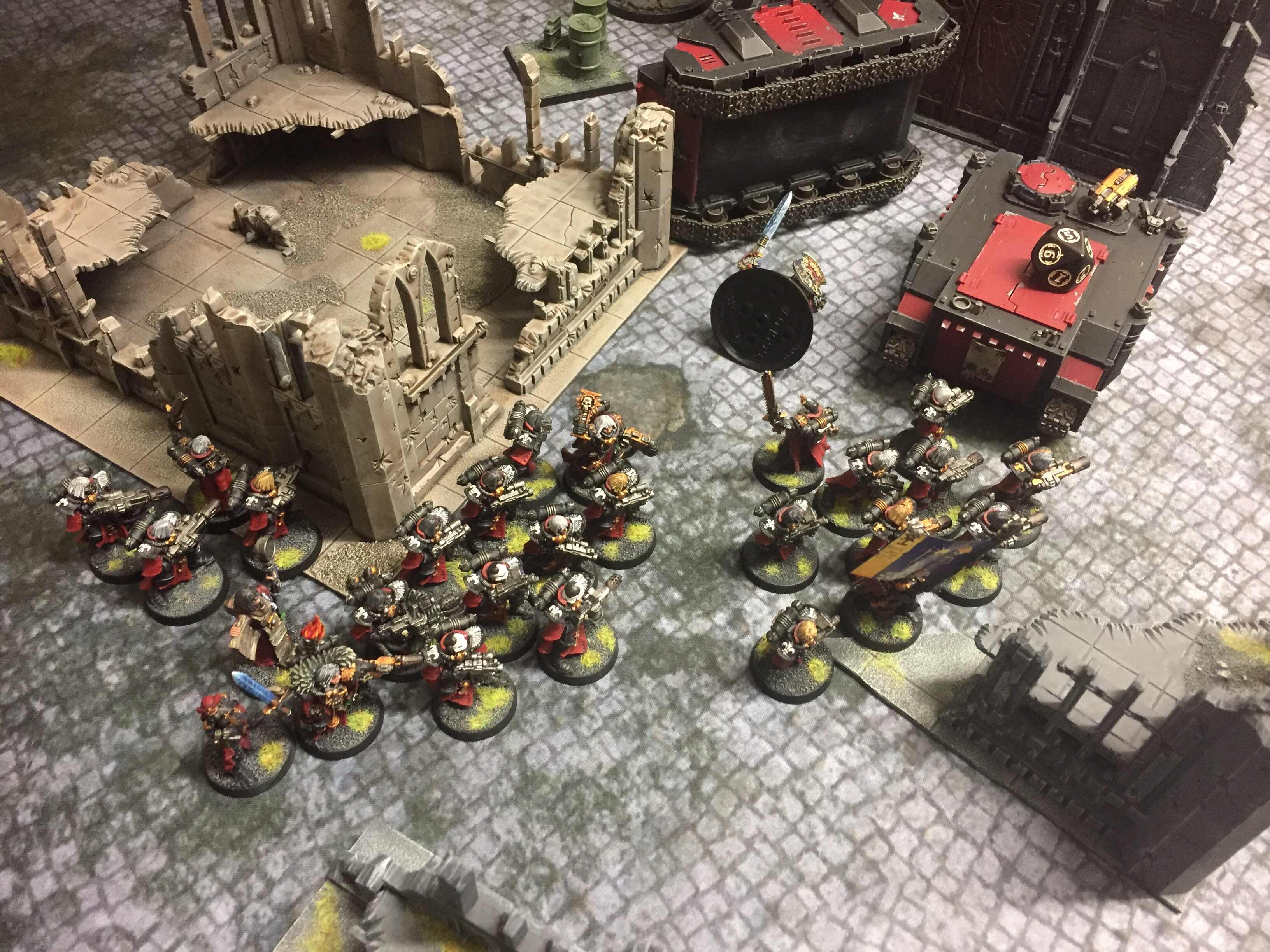 I also found that the Sisters are a now a force in which the synergy of units and characters is vital. Popping my Canoness, Dialogus, Hospitaller and Sacred Banner in the centre of a big blob of units meant I was able to provide maximum buff and really increase their potency. Whereas if they had been more spread out (and thus out of range of the various auras) they would have been far less effective! 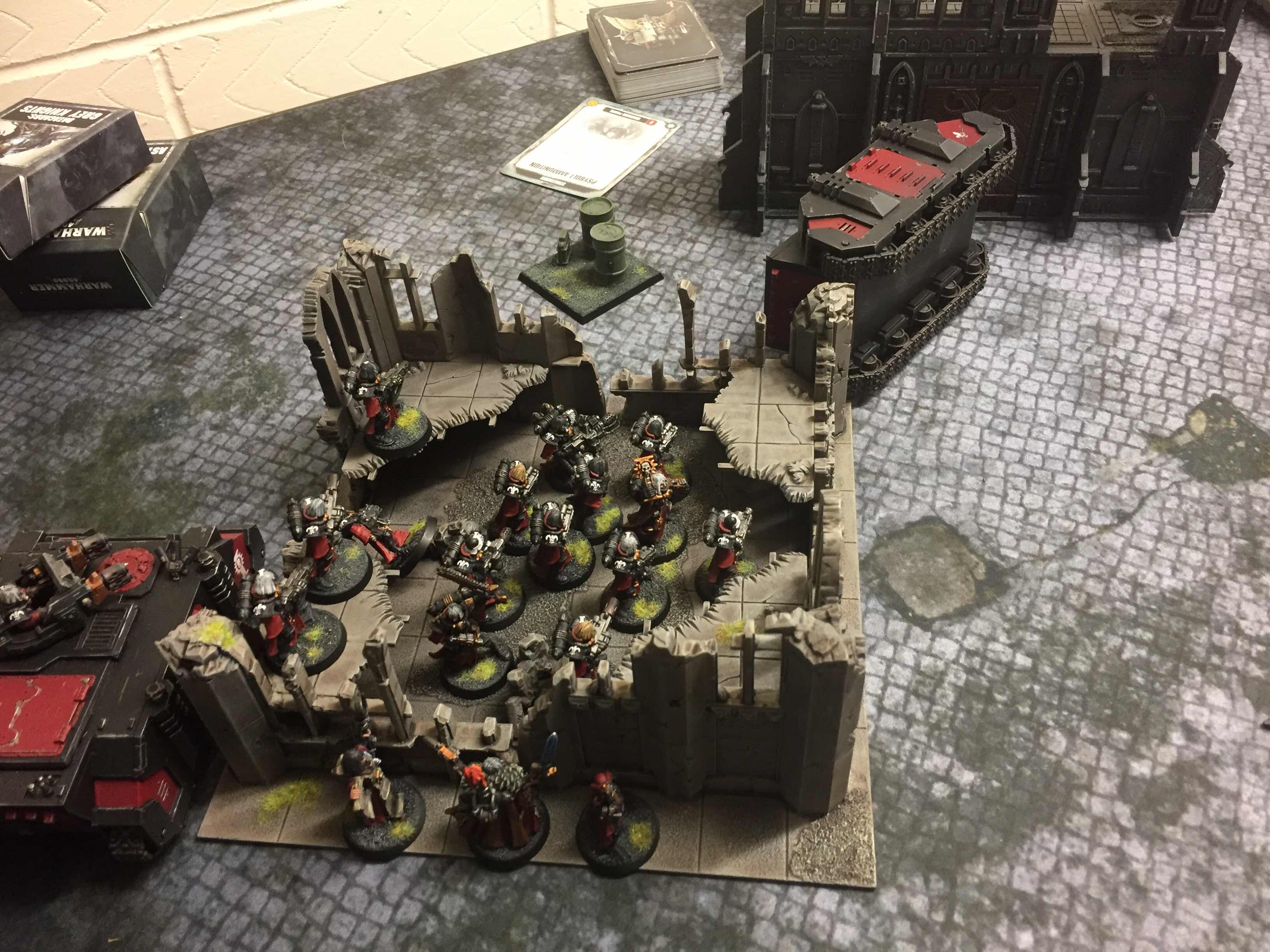 In fact to be honest this synergisation made them perform a lot better than I thought they would, and in one round of shooting they were able to kill two enemy strike squads and Supreme Grand Master Kaldor Draigo...wow! 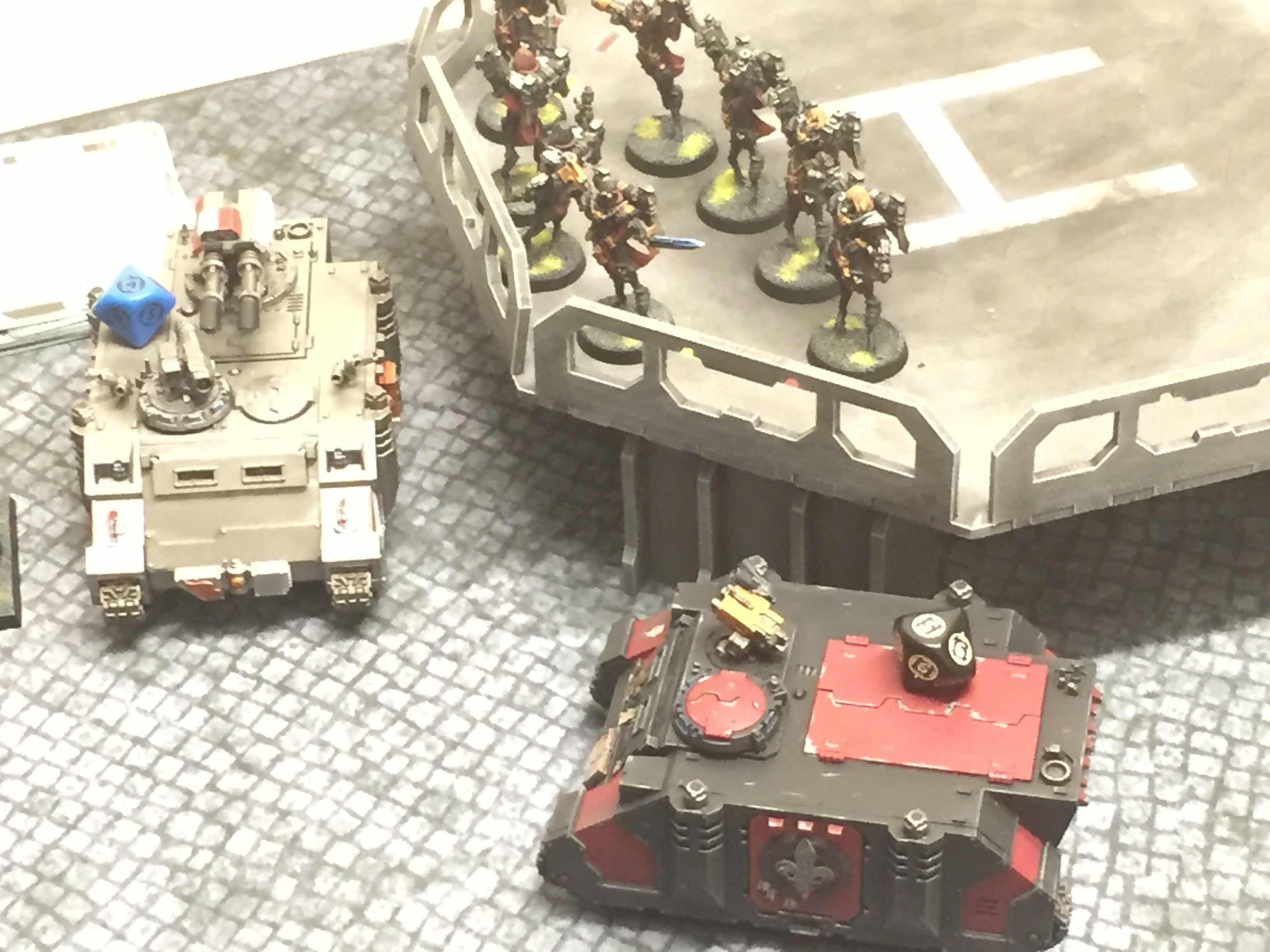 Additionally I found that even the (much maligned) jump-pack equipped Seraphim were very useful in this game. They are still rubbish in close combat; but they are able to swoop around claiming objectives and offering some relatively effective fire support. Again they are made even more useful with the correct combination of Acts of Faith and Strategems to enhance their efforts.

Once again I was able to win this game though the result was much closer.

Overall this was a great way to finish off the year before the start of 2019 and I had a really fun day. I have to say I particularly enjoyed using my Battle Sisters and I think the Beta Codex gives this force some decent options. I will definitely be fielding these girls again in future games!
Posted by LegioCustodes at 12:07