So for those of us who live  in the UK you can’t fail to have noticed the appearance of 40k related adverts that have been hitting our TV screens over the past few weeks.

This is something of a rarity as the last 40k commercials I can remember were for Space Crusade in conjunction with MB Games back in 1990 (I can still recall that annoying kid shouting ‘Plasma Gun’ at his mate before he was subsequently attacked by a lifesize and rather crap-looking Genestealer). 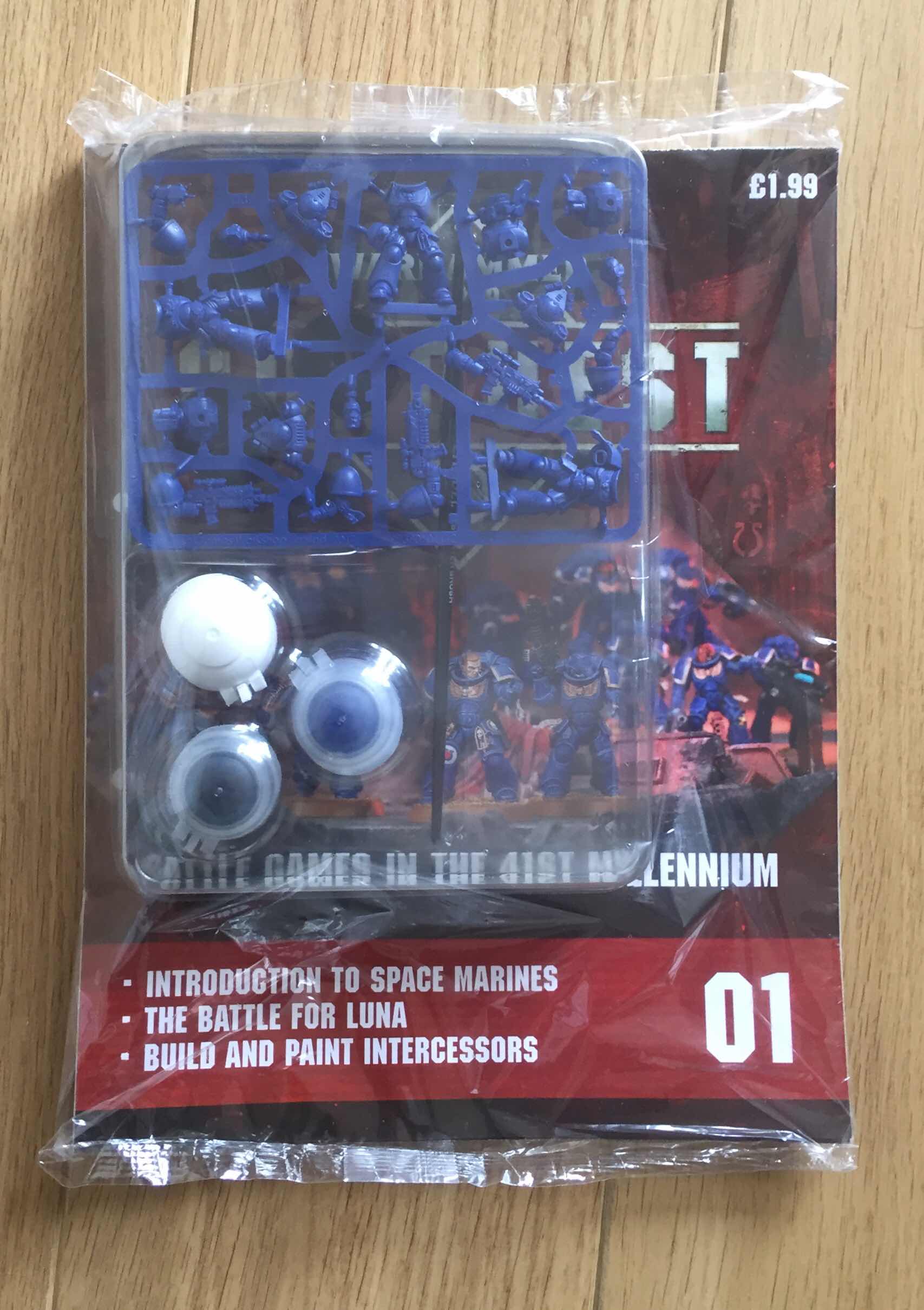 The new product in question is called Warhammer 40,000 Conquest and is a weekly publication that has released in partnership between GW and a company called Hachette Games. 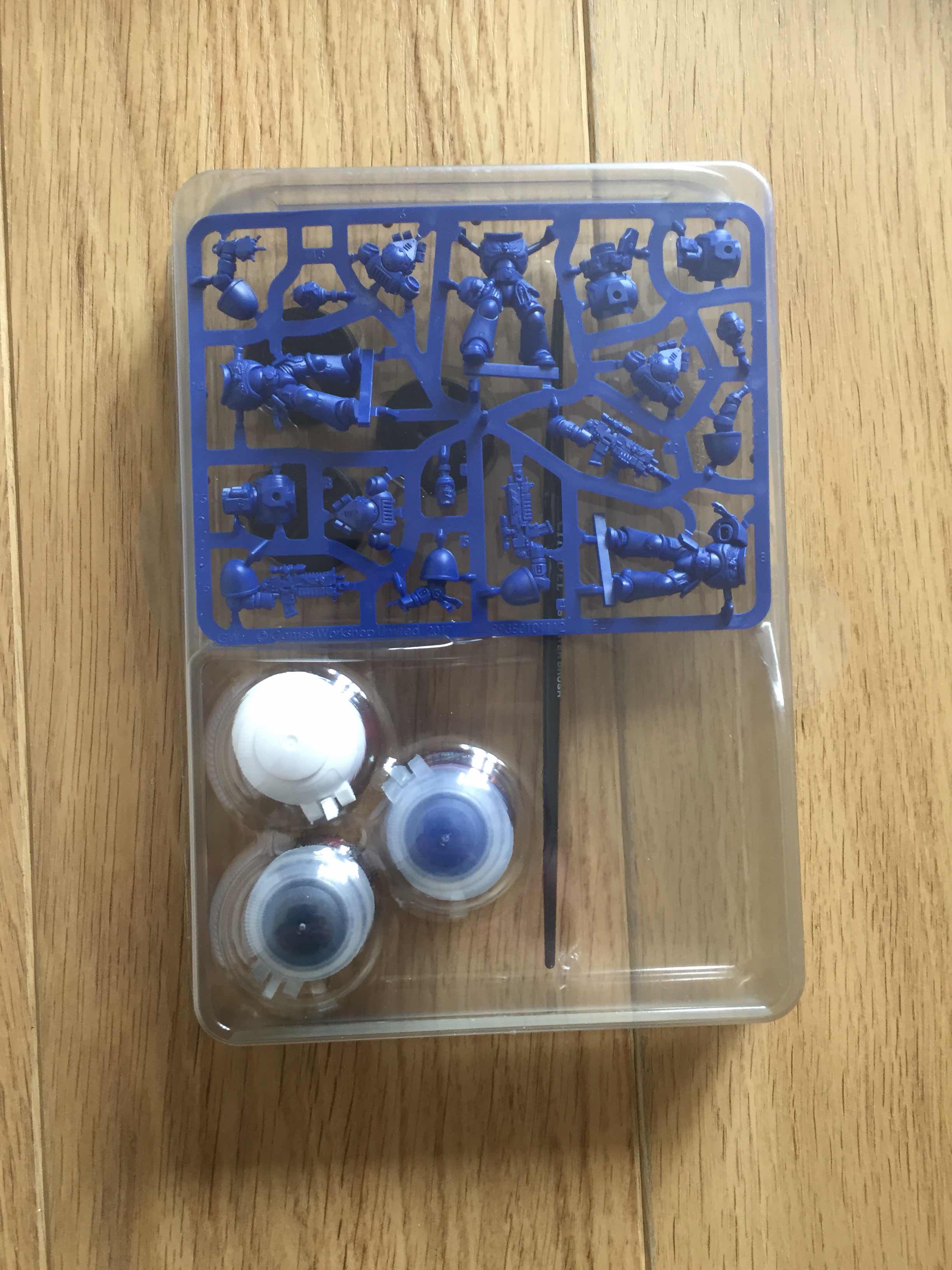 Both from the TV advert and the product design it is clear that the publication is aimed at drawing new blood into the hobby, which to be fair is a great idea.

I am a firm believer that if we want our awesome pastime to thrive and continue then there is an obligation on everyone involved (customers and service providers) to try and recruit new players. 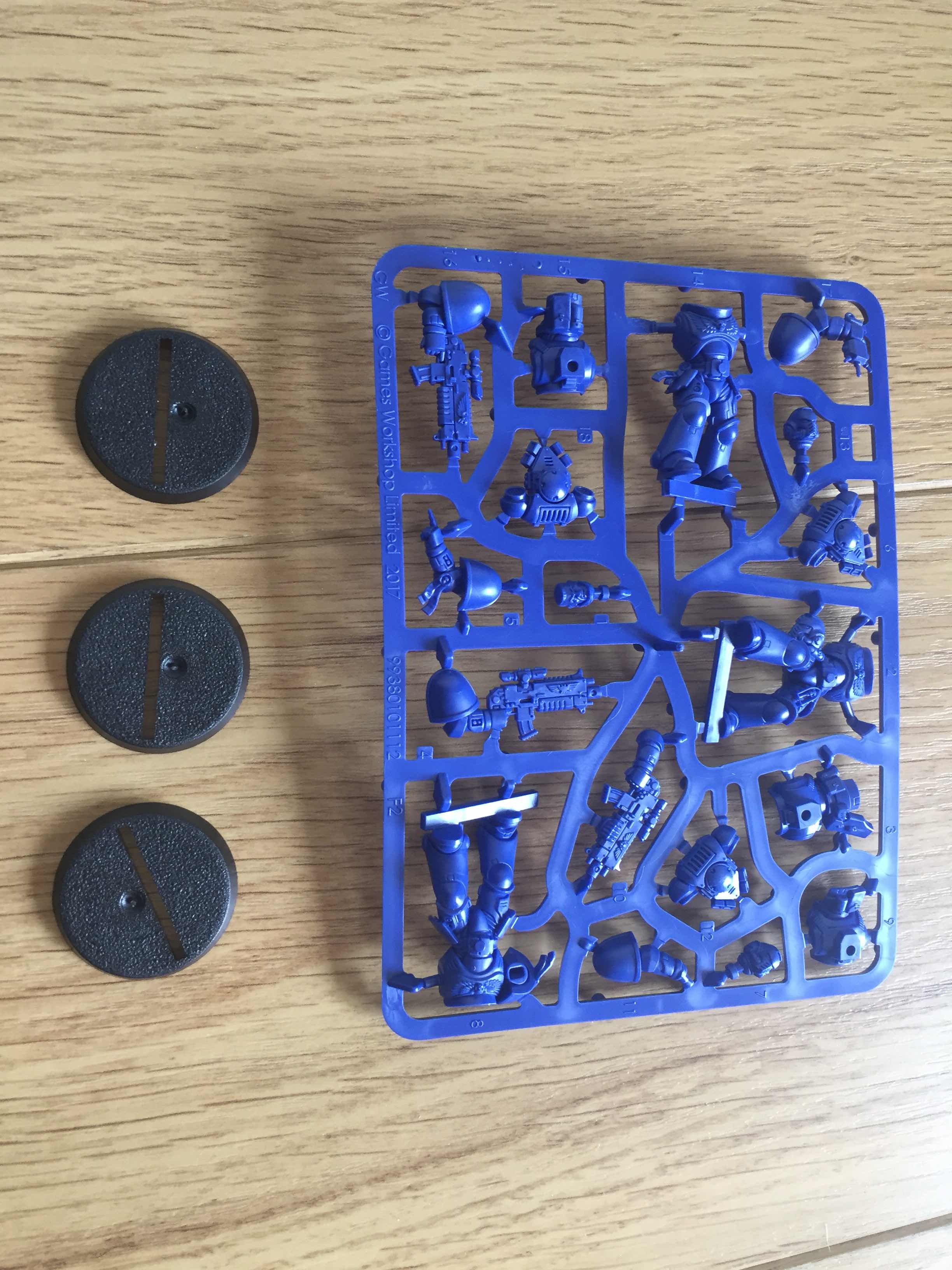 Issue 1 of this publication costs £1.99 which is ridiculously cheap as it comes with the following:
So for £1.99 you are getting around £20 of stuff. 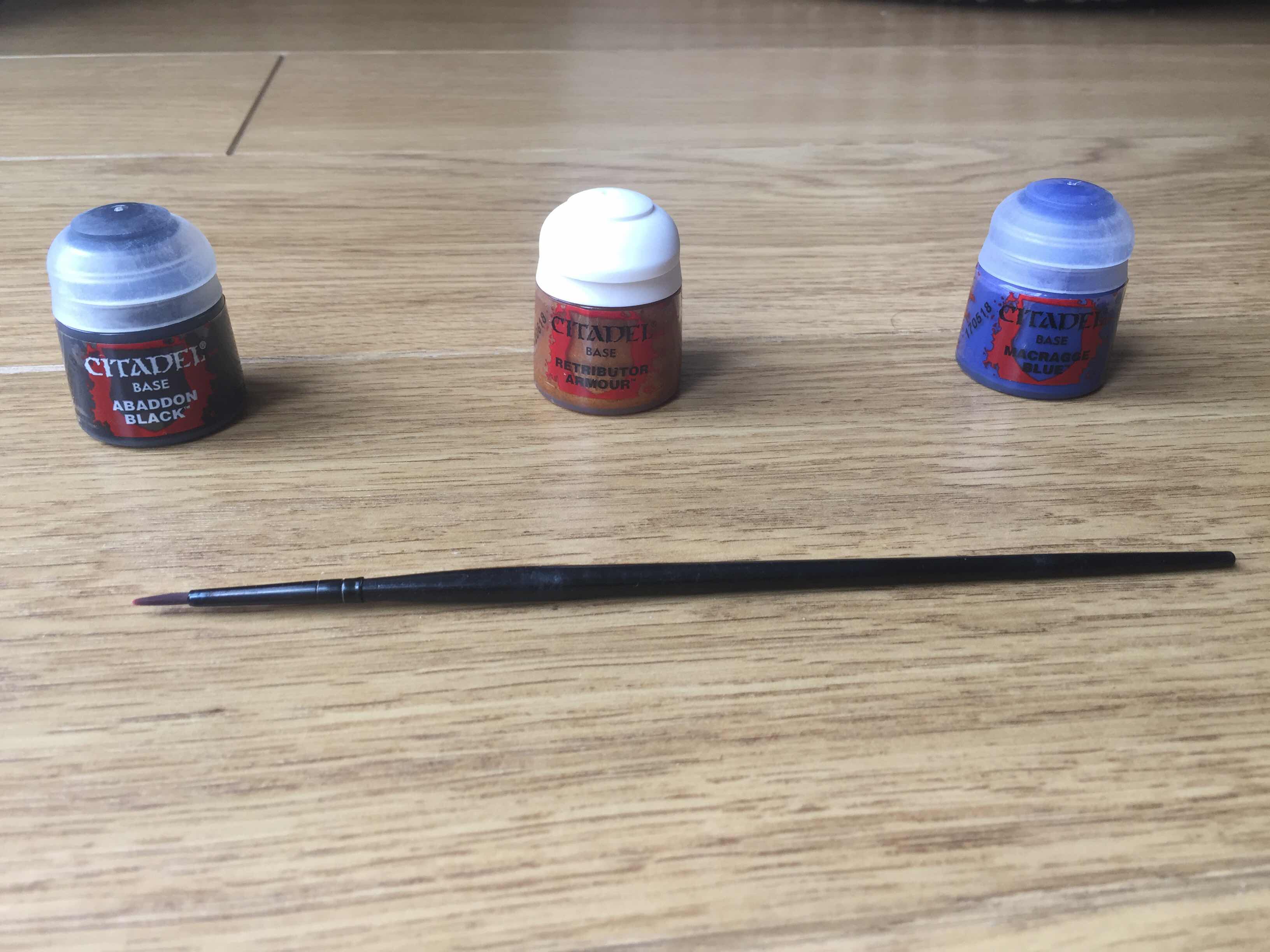 This is absolutely great value and is a fantastic tool for generating interest amongst potential new gamers and is highly affordable as an entry point. 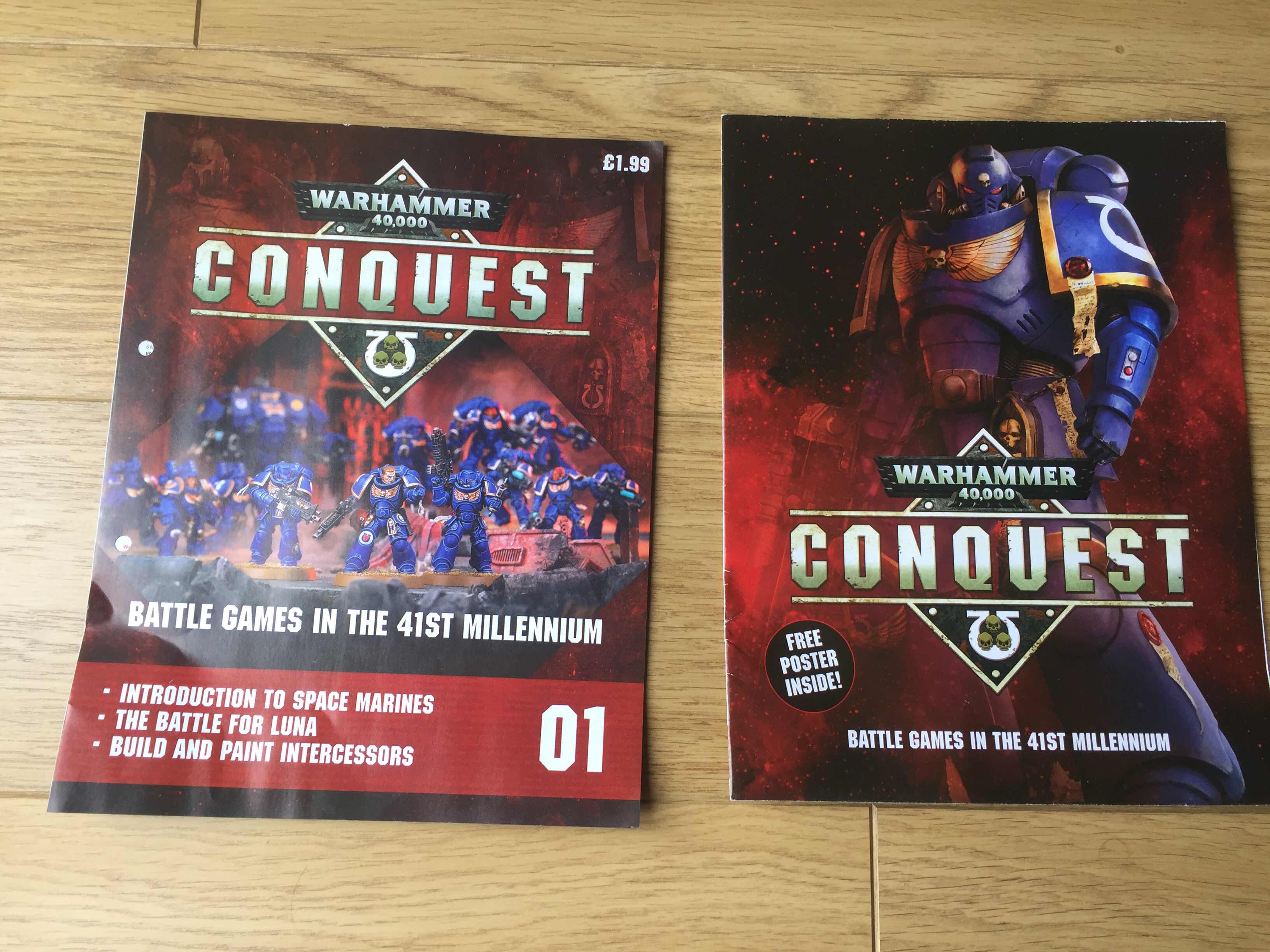 However herein lies the problem... the magazine is such good value that hobbyists have been buying multiple copies each. Now I’m all for a securing a bargain and I don’t begrudge anyone snatching a deal but I’ve heard of some people buying multiple copies and clearing out shops entire stock. This means that all those potential new hobbyists who saw the adverts will now turn up at their newsagents looking to buy the magazine and end up walking away empty handed... potentially never to return.

Even Hatchette themselves have now run out of copies of issue one on their website. Even worse are the opportunists who have bought up huge quantities of stock to flog on eBay for £12 each. 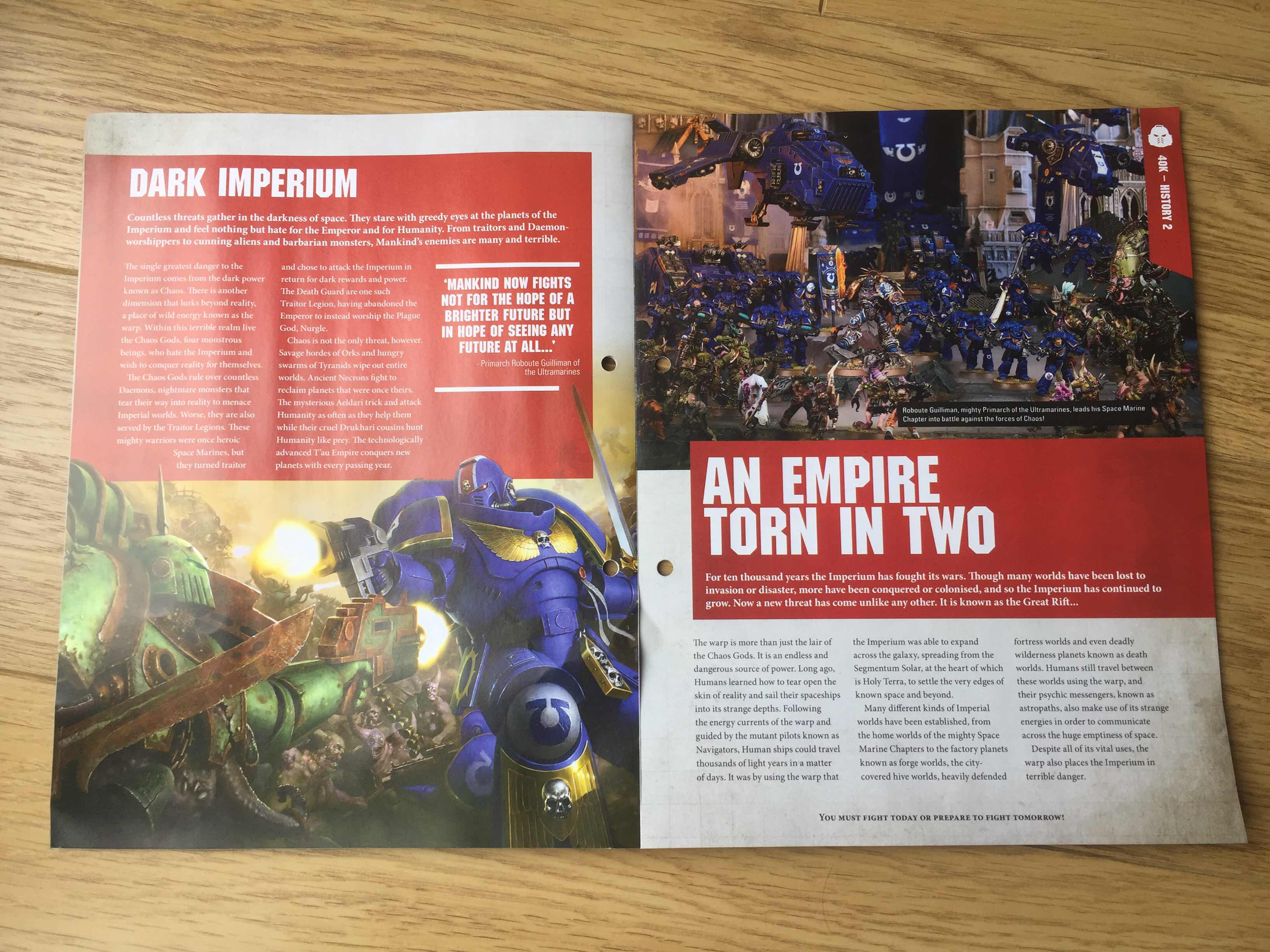 The magazine itself is a good quality publication which acts as an introduction to the universe and setting. Issue one focuses on the Imperium and specifically the Primaris Space Marines (no surprise there then).

There is also a series of guides to assembling, preparing and painting the models... now I’ve heard people moaning about how basic these guides are but as far as I’m concerned they are entirely fit for purpose as they are specifically aimed at brand new beginners. Anything more advanced would either confuse them or put them off. 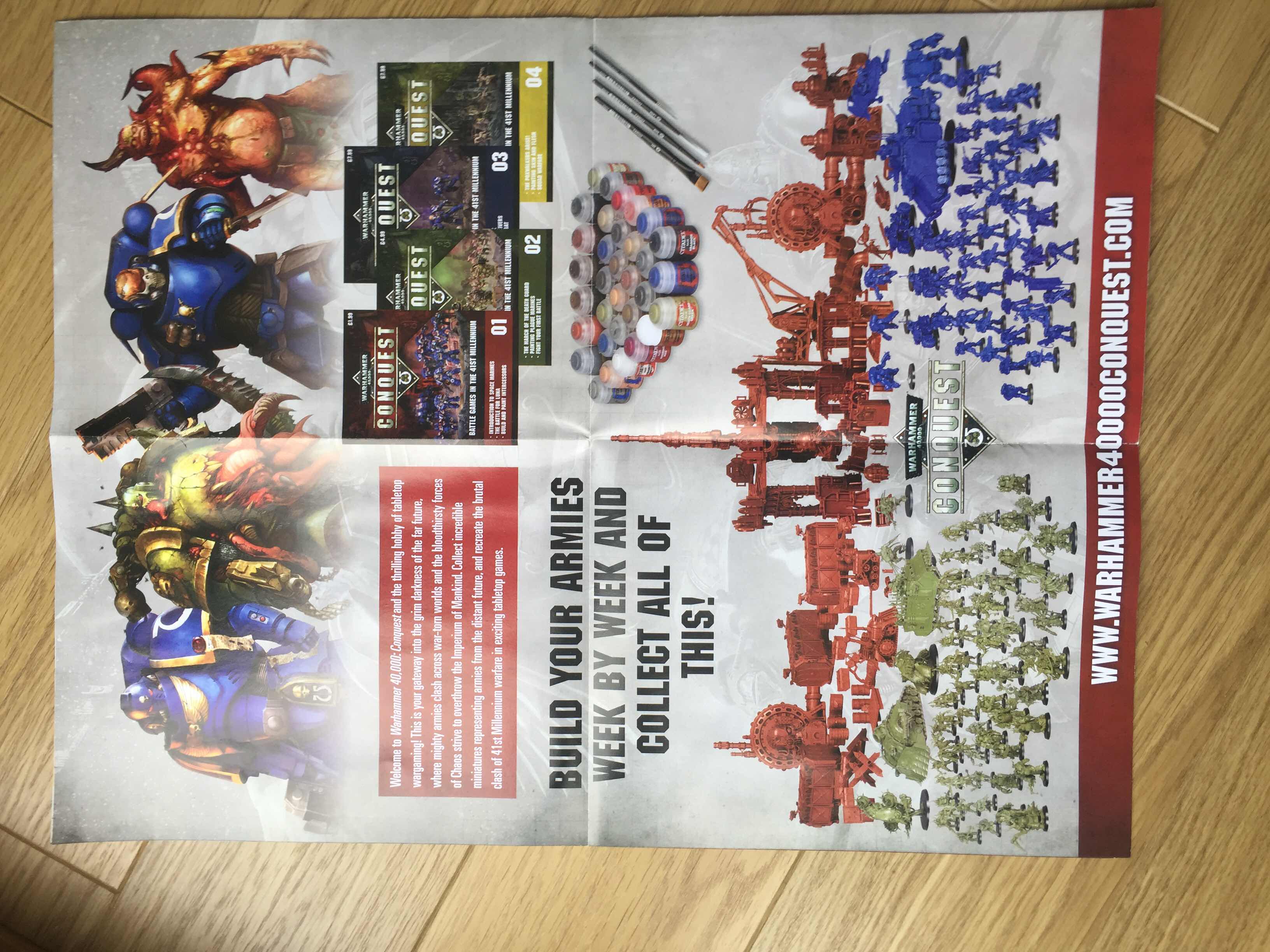 There is also a two-sided A2 poster included; with one side displaying a photograph of all the models that you will collect over the course of 80 issues... 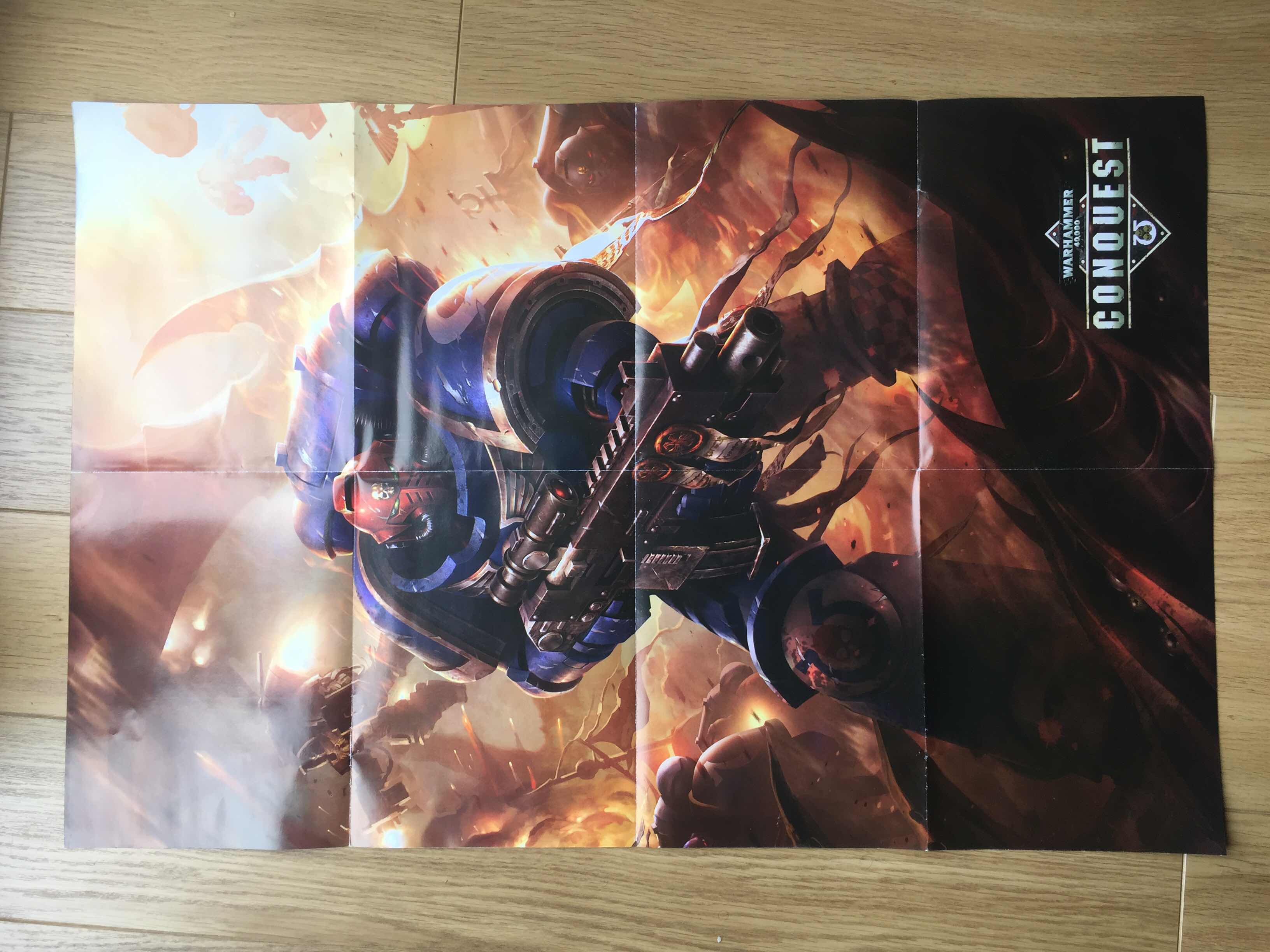 ... and the other side has this cool-looking Ultramarines Intercessor Sergeant from the current edition of Codex Space Marines. It’s already been blu-tac’d to the wall of my hobby room. 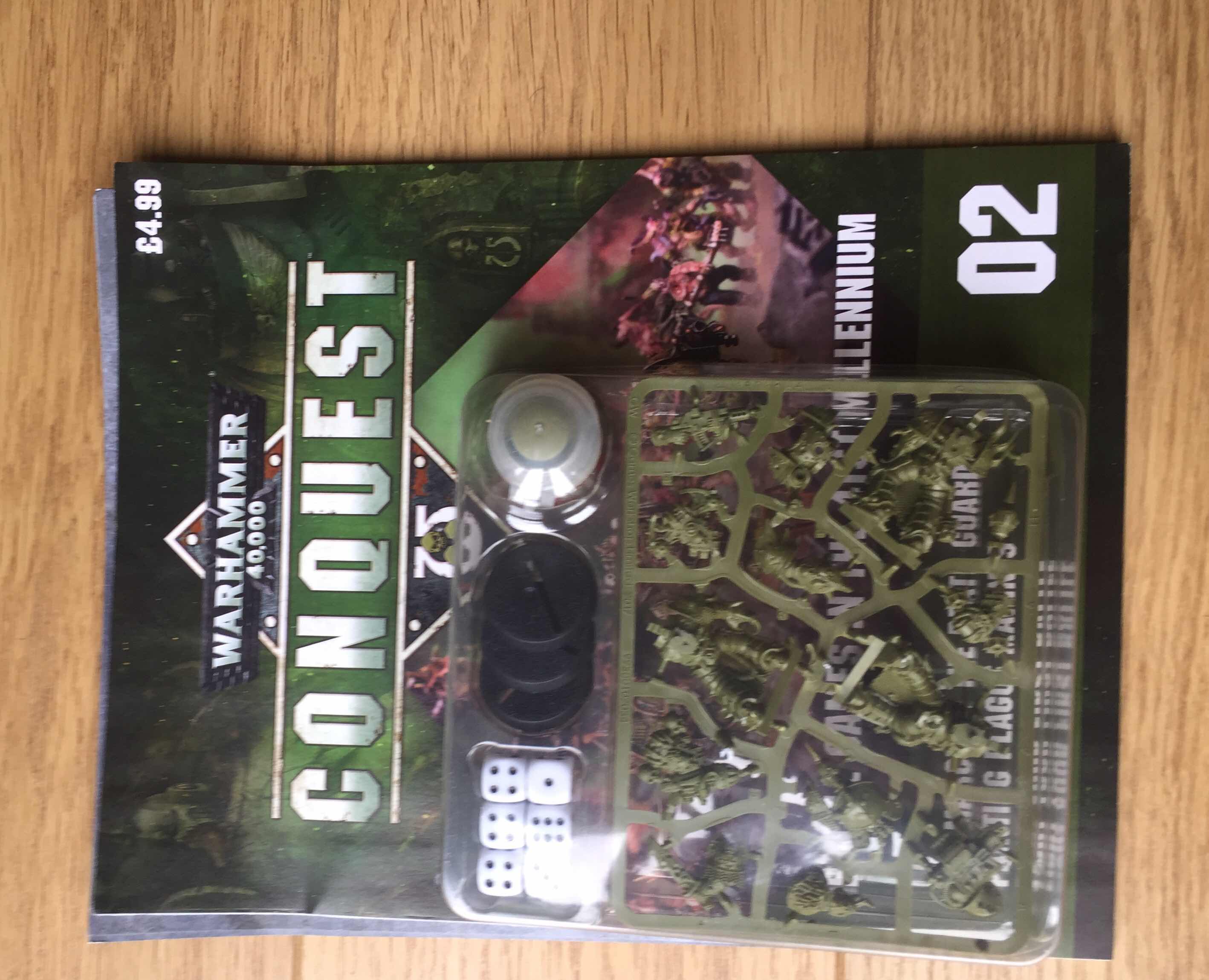 Issue 2 of the magazine costs £4.99 and comes with 3 Plague Marines (again these are the easy build versions) armed with a Bolter; Plasma Gun and Blight Launcher. 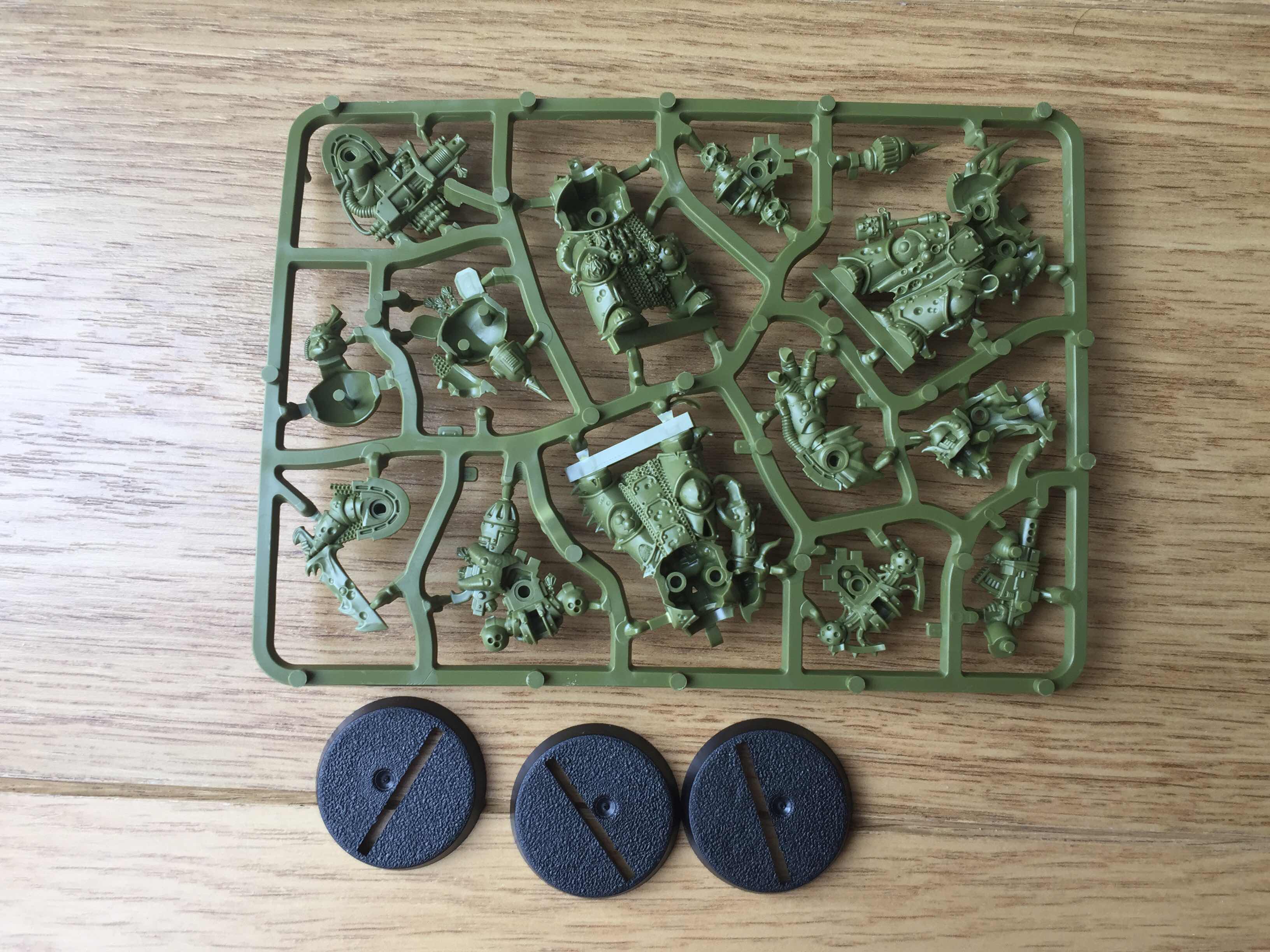 The Plague Marine models come in a sickly green plastic as opposed to the bright blue of the Primaris models. This means new players can get the two opposing forces on the table as soon as possible and still be able to differentiate between the two factions. 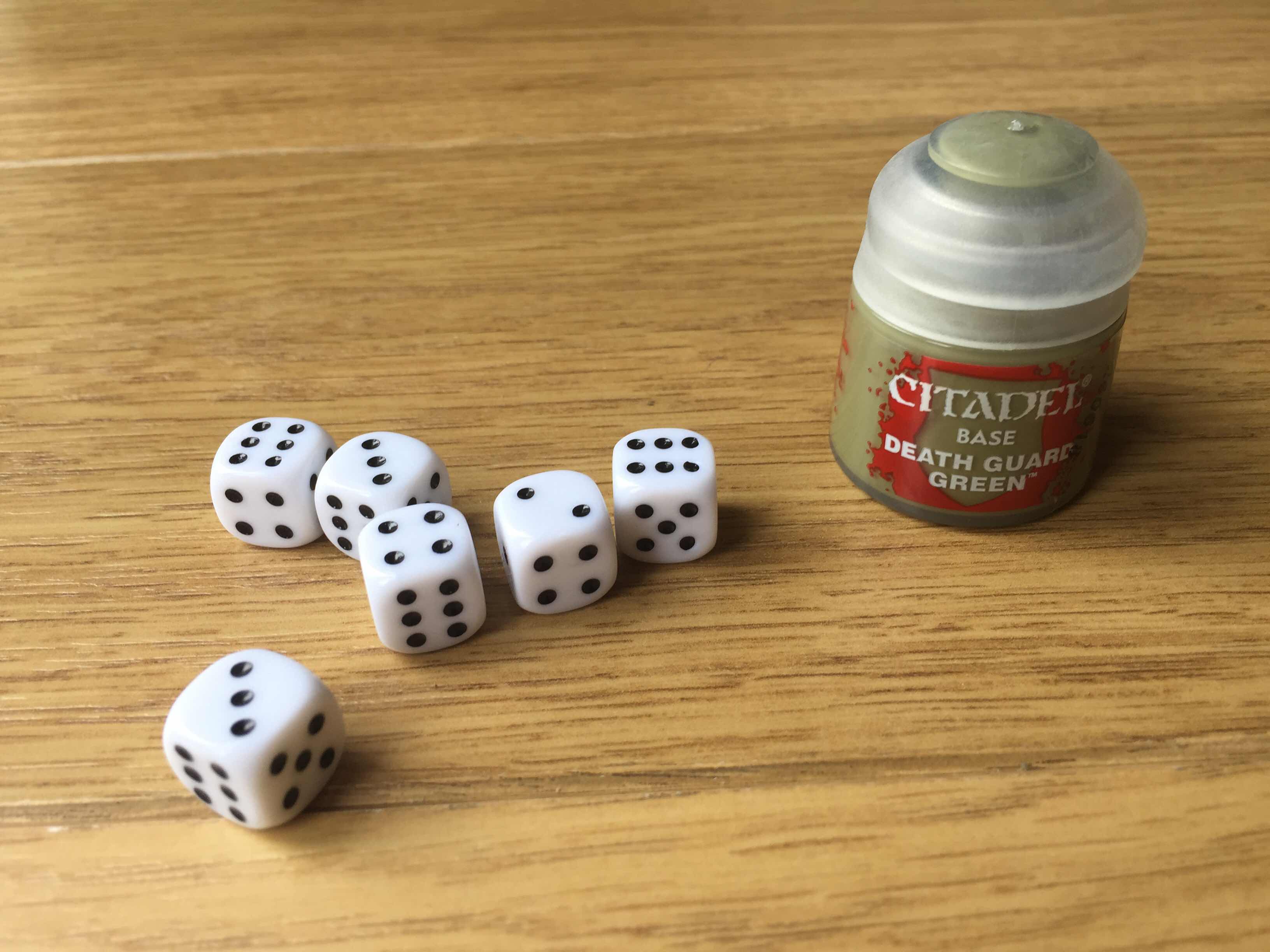 The second issue also includes a pot of Death Guard Green paint and six dice (which are always useful.) 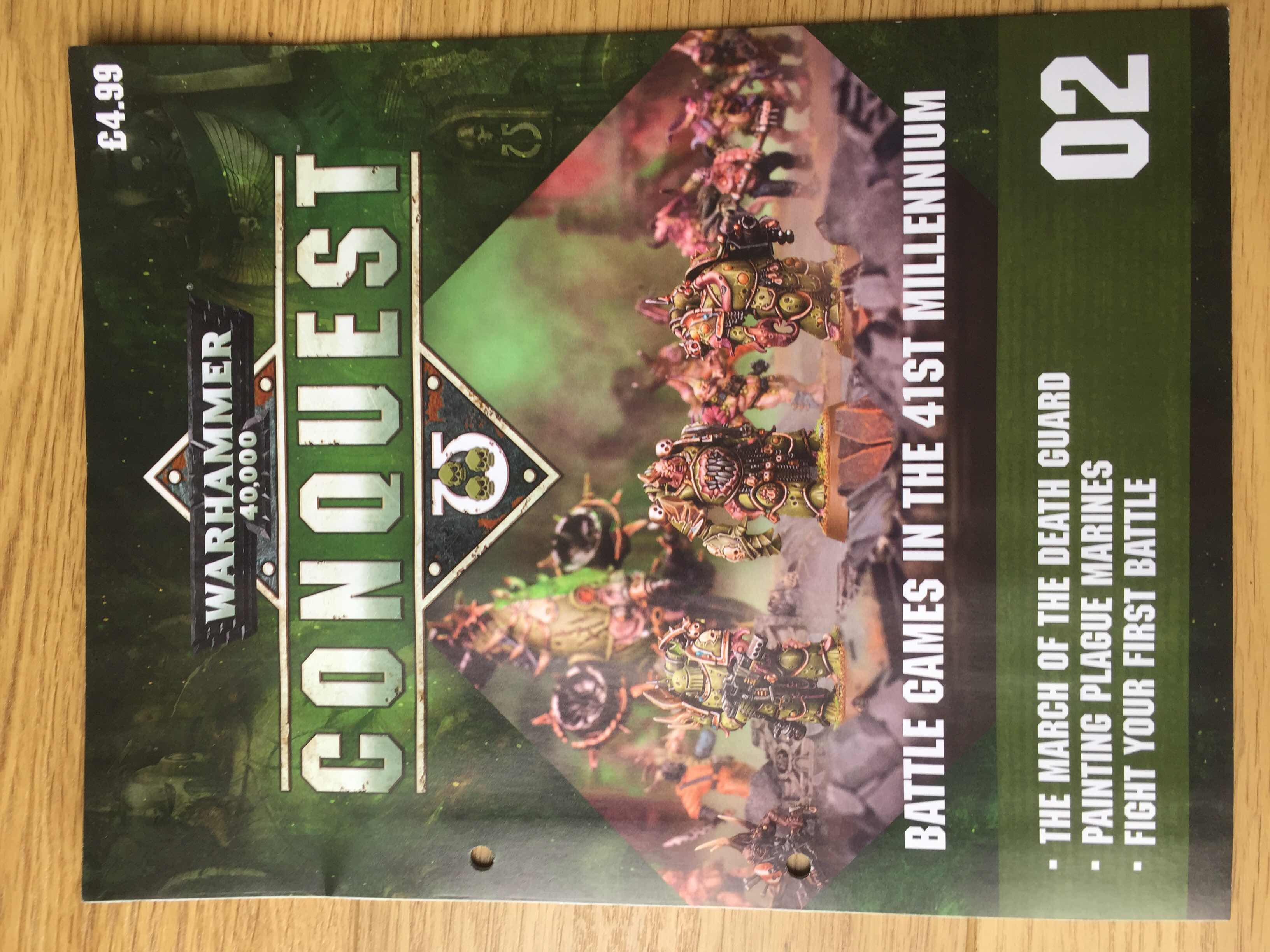 This issue is as well produced as the last one and this time focuses on the Chaos Space Marines, specifically the Death Guard of Nurgle. 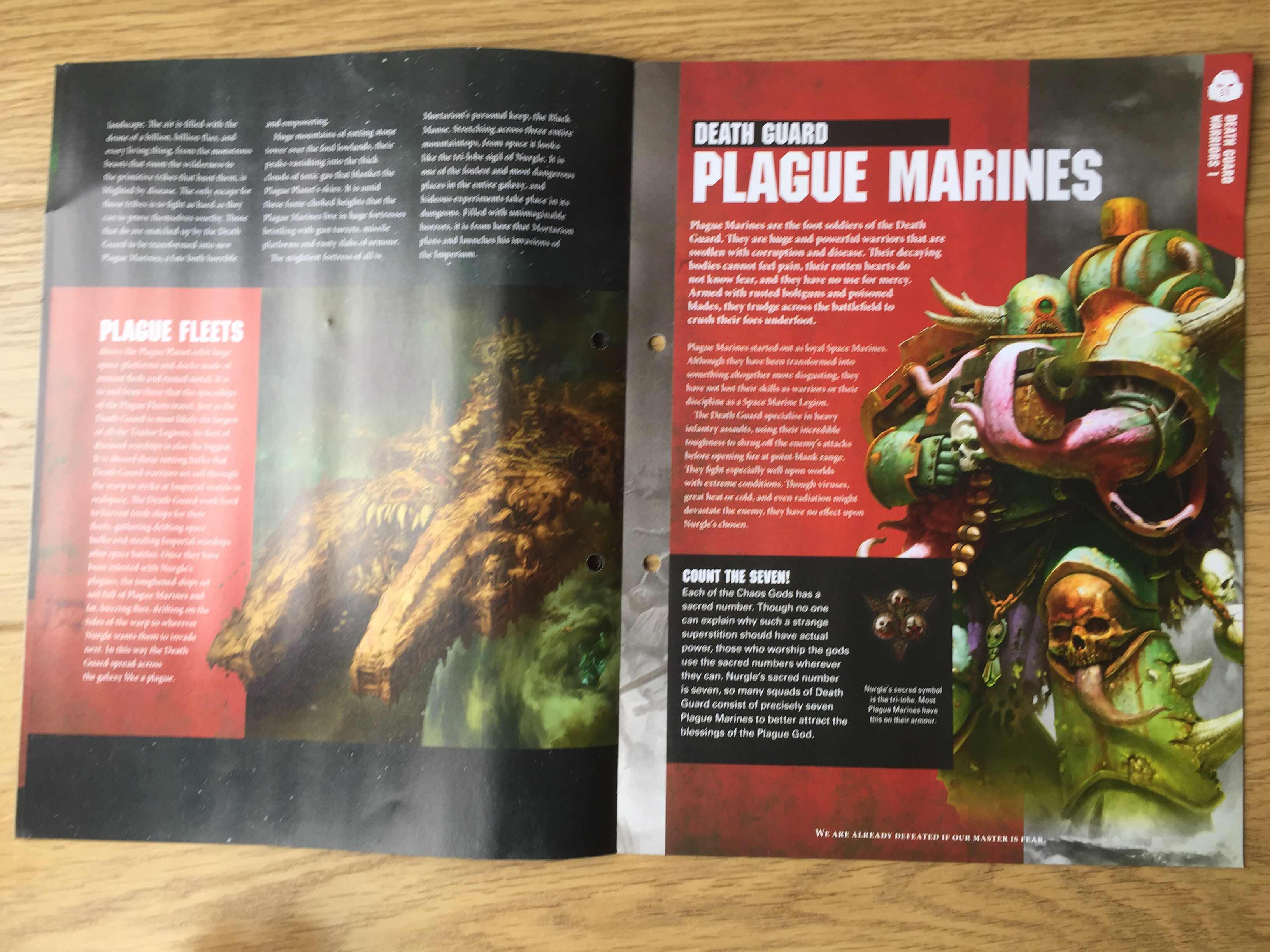 There is also a card fold out play mat for gamers to fight their battles over. It isn’t amazing but is definitely useful for new players as it is a cheap and quick alternative to terrain. 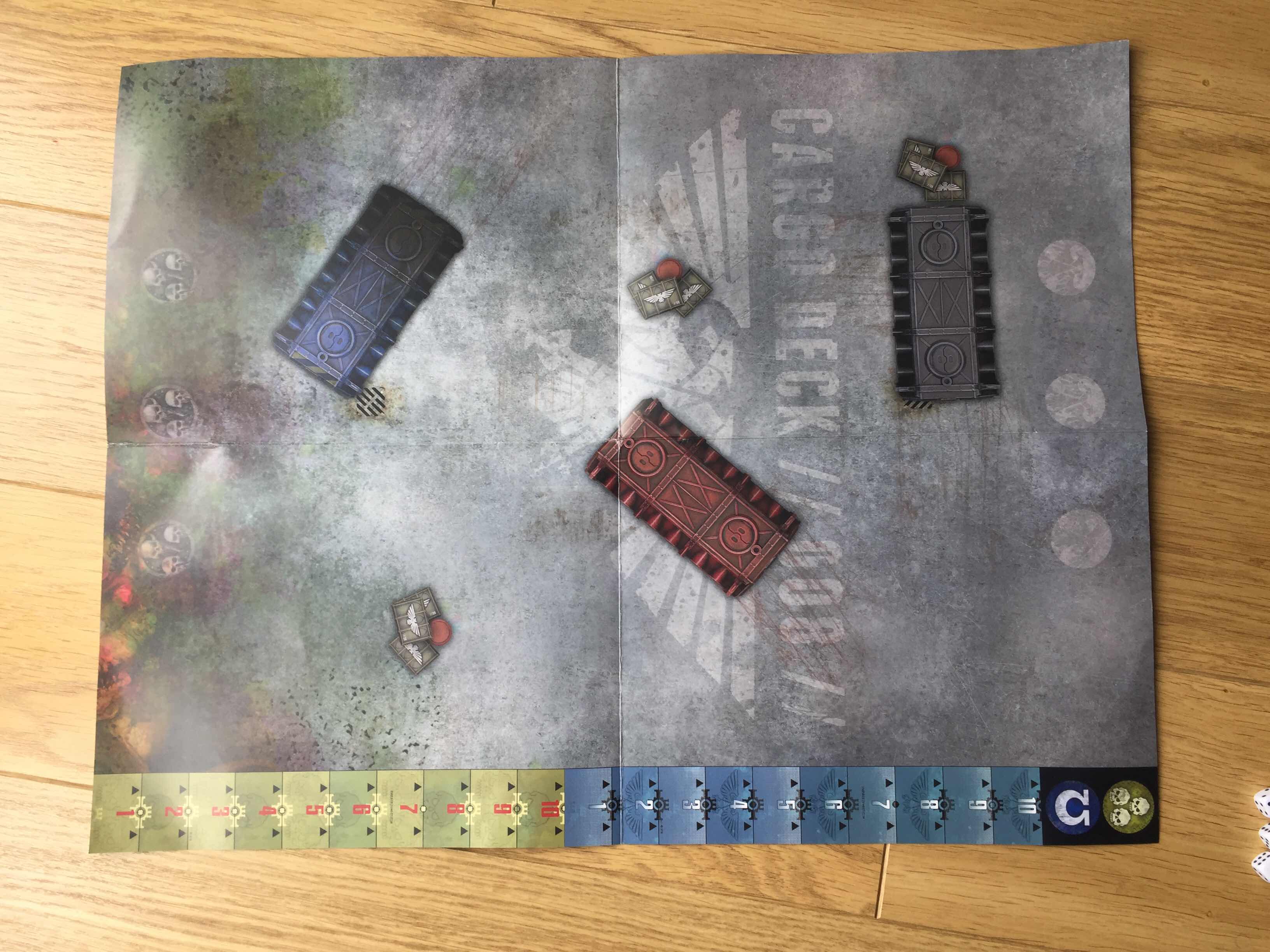 Now I thought long and hard about this but I eventually decided to sign up for a full subscription to the 80 issues.

Whilst issue 1 and 2 were at a special introductory cost of £1.99 and £4.99 respectively the remaining issues will cost £7.99 each (£9.49 for me as I’ve gone for an upgraded premium option). Some people have said this is too expensive but to be fair it’s about the same cost as a latte and pastry from Starbucks so I think I can afford it.

I’ll admit that I really like the idea of getting a magazine and two full armies in small bite size chunks over a two year period.

Having received my first two issues of the magazine I am more than content with my choice. I know some people on the forums say they have had issues with Hatchette Partworks in the past... but so far so good! 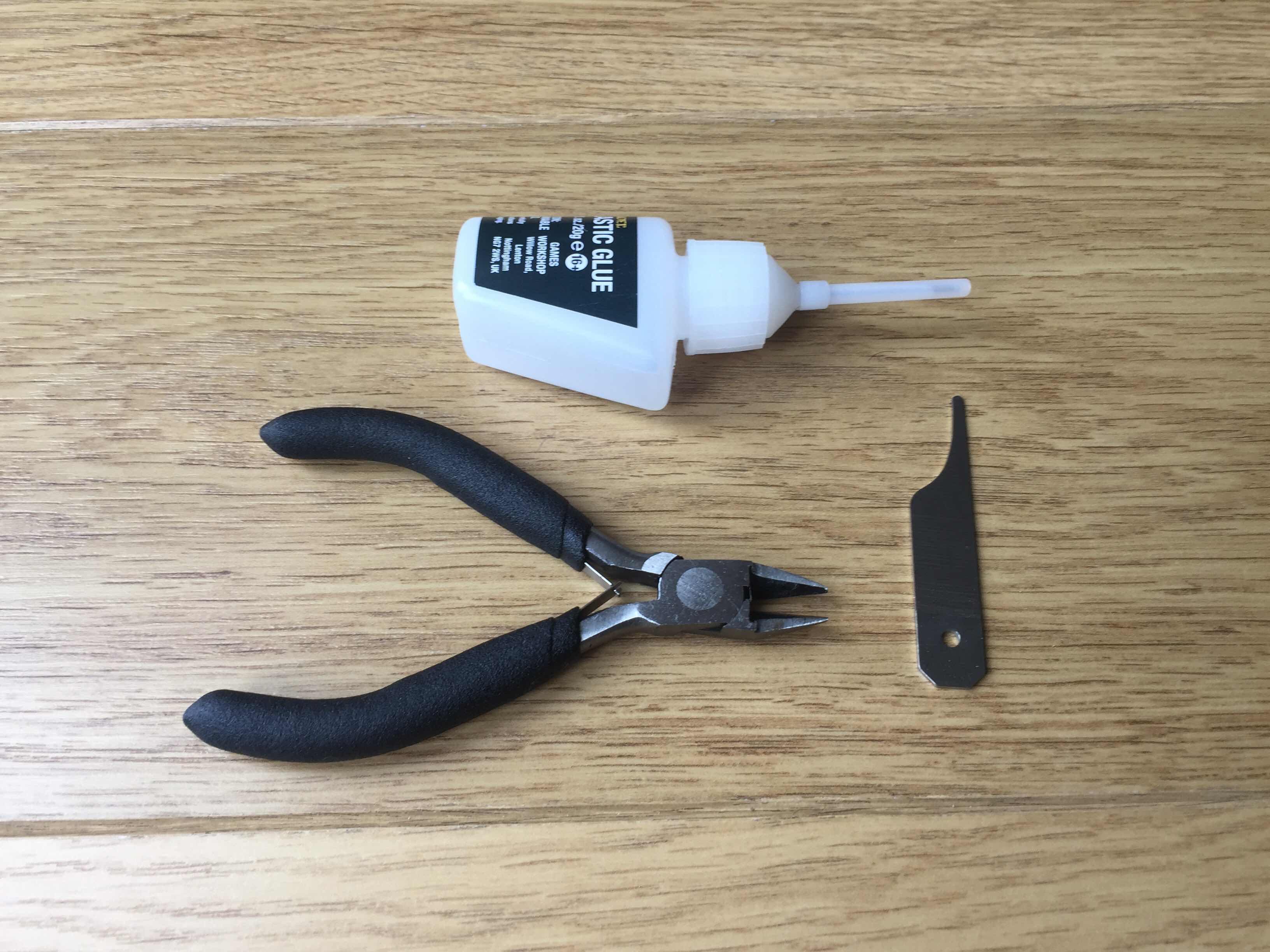 As an added bonus as a subscriber I occasionally get some extra goodies with my package and so I was pleased to receive a pair of Citadel clippers, a moldline remover and a pot of Citadel plastic glue with my first two issues! Not a bad little haul!

Right I’m off to paint up my new Intercessors!
Posted by LegioCustodes at 07:26