Early in the year I decided to bulk out my Heavy Support options with the addition of three five man devastator squads to reinforce my Crimson Fists. I really like these models and they were a joy to assemble and paint.

As I started these models in March the game was still in its seventh edition and there was little indication that eighth edition was looming just around the corner. Thus I equipped these guys with sixteen grav-cannons which were much more powerful in the last edition of 40k... it's fair to say that I was a little bit annoyed when the new rules substantially reduced the potency of this weapon loadout.

These guys provided a great opportunity for me to try out my new refined system for painting my Crimson Fists which I feel gives a lot cleaner, neater and more professional finish than my previous efforts. It is a very time intensive technique and focusses heavily on neat edge highlighting in order to bring out the sharp edges of the marine's power armour. 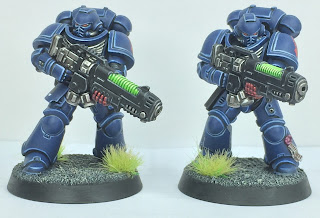 As all of us know in July the Warhammer 40k Universe was shaken up massively with the release of eighth edition and the Primaris Space Marines. Now I know people have mixed feelings about these guys and more specifically their place in the established canon...but all that aside I have to admit the models are absolutely beautiful and they are really nice to paint. 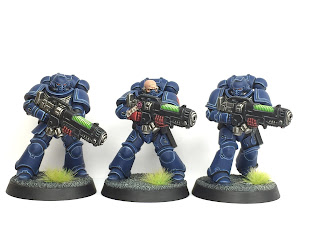 For my first Primaris Marines I chose to assemble and paint the Hellblasters from the Dark Imperoum starter box set. These guys are the heavy support option (devastator equivalent) for Primaris forces, so I picked them in order to off-set my disappointment with the nerf'ing of my grav-cannon wielding Devastators. 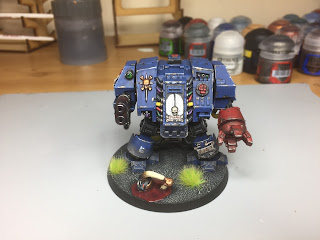 I also managed to churn out a dreadnought for my noble sons of Rogal Dorn. This model is the monopose dreadnought that came with the "Assault on Black Reach" boxset for fifth edition and had been sitting on my paint station assembled and undercoated since around 2009. 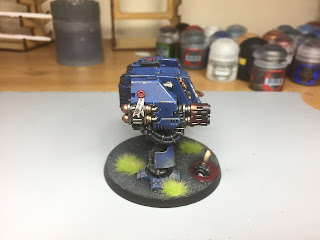 Another model that had been sitting on my paint station for some time (2012 in this case) was the metal model of Pedro Kantor, Chapter Master of the Crimson Fists. He was a model I loved but never got around to painting, however with the increased emphasis on special characters in the new game it really gave the motivation to get him finished. 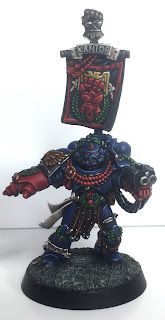 Things have been quiet for my Rogue Trader Salamanders this year and the only model I have managed to paint for them was an original 1988 Rogue Trader dreadnought. This was a cool model to paint and it was interesting to compare it to the contemporary Crimson Fist dreadnought shown earlier. 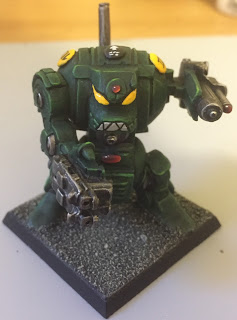 So in general it has not a bad year of productivity for my Adeptus Astartes forces, hopefully I'll be able to keep up the tempo in 2018... In fact I'm already working on my second squad of Primaris Crimson Fists.

Next time I'll look at my miscellaneous hobby activities for the last year....
Posted by LegioCustodes at 18:36