So here we are for the final look back at 2017 and this time I am going to focus on the various miscellaneous projects that I undertook throughout the year.

First up let's start with something big... very big indeed... 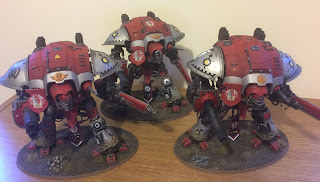 Early in the year I suffered a stinging defeat against my mate's beardy army of Grey Knights that he had kindly built specifically to destroy my Crimson Fists. Always one to escalate matters I used this horrendous loss as suitable motivation to finally finish of the three Imperial Knights that I had started two years earlier.

To be honest this was a fairly daunting project as the models are just so huge, but once I got into the swing of it they are actually seriously fun to paint... and I have to say that they look great when completed!

Needless to say the next battle we fought was a different story... 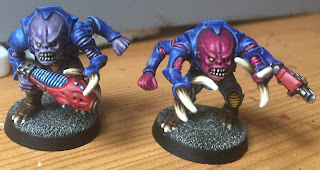 My Rogue Trader Genestealer Cult is a project that I like to dip in and out of when I get the chance and so I managed to add a few hybrids to the force in 2017, including one with a very old school plasma gun! 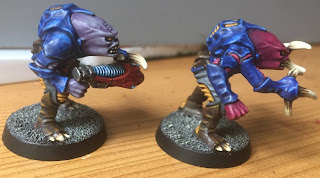 I initially despised these sculpts when they first came out but in recent years I have really grown to love these old plastic Genestealer hybrids and I have a few more basecoated and waiting a lick of paint. 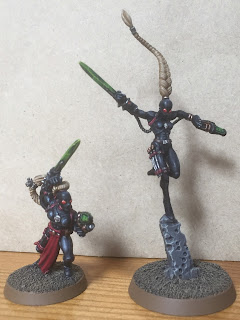 I then started a project to paint up a whole load of Imperial Assassins and my eventual goal was to paint up one each of the original 1995 models and their 2014 counterparts. 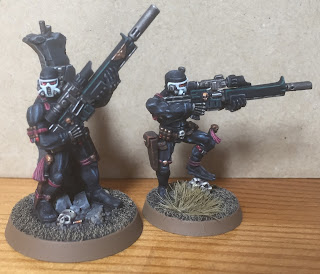 I managed to complete two Vindicares and two Callidus Assassins before I got distracted with other projects. I will probably come back to this project at some point in 2018. 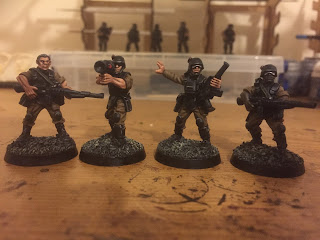 After having finally finished playing through all of the Fallout 4 expansions on my XBox One I had a something of a thirst for some more post-apocalyptic action and so painted up a selection of Enclave Base Defence Troops clad in combat armour. 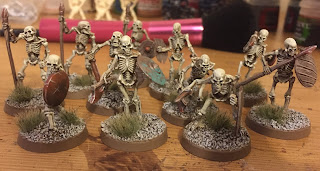 Here's a confession... in nearly thirty years of being in the hobby I had never painted a Fantasy model until 2017!!

However I finally overcame this hurdle and put together a small warband of skeletons! Again I really had fun painting these guys up and it gave may a chance to try out my verdigris and rust effects on the weapons and shields.

Well we started this post with something big so let's finish it with something small... at the end of 2017 me and my mate got back into playing games of second edition (1991) EPIC and this spurred me on to painting up a few more detachments for this absolutely brilliant game system. 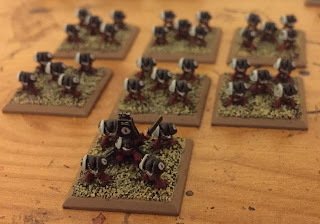 6mm is a great scale to paint and it was relatively quick and easy to churn out a new veteran detachment and assault detachment for my Flesh Tearers army.

I have now well and truly been bitten by the Epic bug again and so have already started painting up a few more detachments to bulk out my force, hopefully I'll post some pictures of these soon!!