So this weekend one of my best mates was on leave from a tour of duty with the Royal Navy and we got together to play a game of eighth edition. This was my third go at this new system but it was his first so we kept the Army Lists deliberately simple in order to let us pick up the rules without too much complexity.

For me this was also the perfect excuse to try out my latest gaming mat which is the beautiful 'Concrete, 6x4 mat' from Martin and the team over at URBANMATZ. I have loads of mats from these guys and I can't praise them enough! They make the tabletop look awesome and roll up which is means they can be stored easily, something that is vital when storage space is at a premium. 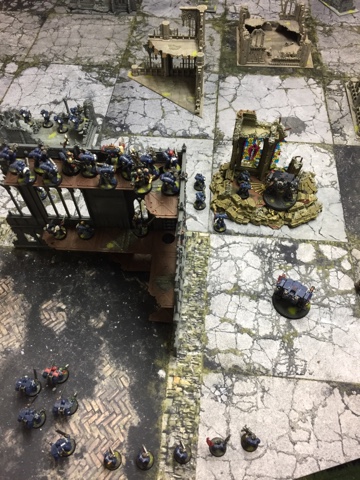 The armies were Infantry and Walker based with the Crimson Fists being led by a Captain and a Lieutenant whilst the Grey Knights were commanded by Supreme Grand Master Kaldor Draigo and Grand Master Voldorus both of whom are terrifyingly effective psykers. In order to counter this I took two librarians in order to give the Fists some sort of psychic defence! 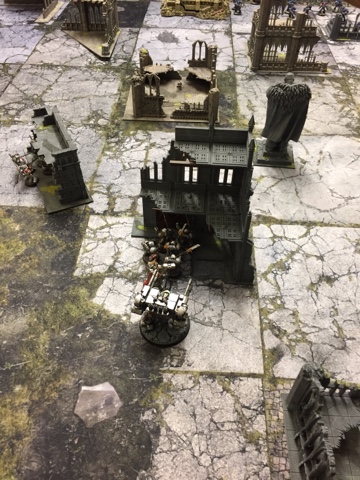 The Crimson Fists set themselves up defending one corner of the battlefield and swiftly decided to hunker down around the nearby ruins of a fortified building, this would give them the ability to bring their ranged weapons to bare and allow them to make the most of the shooting phases before the Grey Knights closed into melee.

Meanwhile a couple of Grey Knights units set up in their own deployment area (including a dreadnought with quad autocannons) whilst the rest of these argent clad warriors remained in reserve so that they could deep strike... 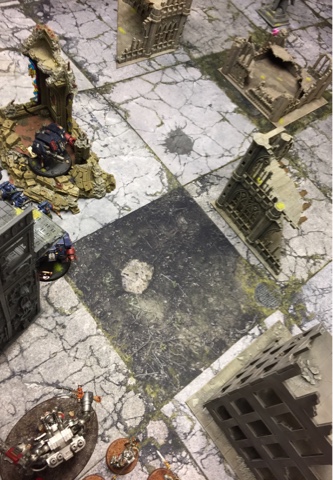 ...these deep strikers then appeared fairly rapidly in my table half and really put the pressure on from the start. With the disappearance of deep strike mishaps and the new rule stating teleporting figures can appear anywhere further away than 9" of the enemy (with no scatter) this is now a highly effective means of deploying the right troops to the right place at the right time.

Luckily I had pre-emptied this tactic and had deployed my marines in a ring of steel with no more than nine inches between units which prevented the Grey Knights immediately deploying within my defensive perimeter. 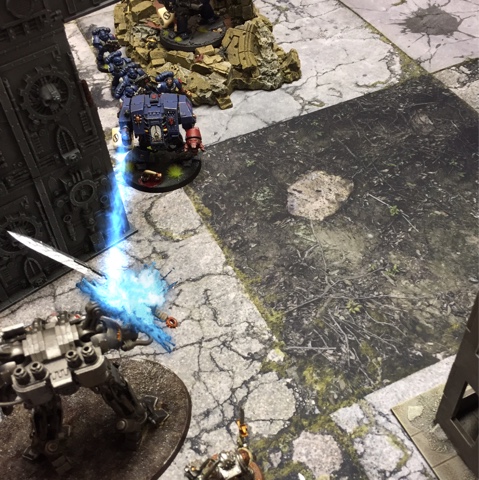 Due to the close proximity of these deep striking troops even my short ranged weapons were able to open up with some very effective fire right from the start of the game. 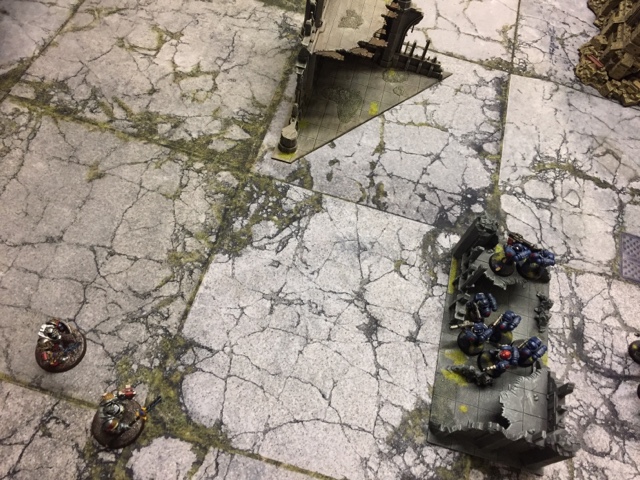 Characters in this version of the game are not just combat powerhouses in their own right but also act as force multipliers for the troops around them. Therefore careful placement of these key assets is key, with this in mind I placed the Captain and the Lieutenant near both a tactical squad and a devastator squad during deployment, this meant that these units could reroll both 'To Hit' and 'To Wound' rolls of 1. 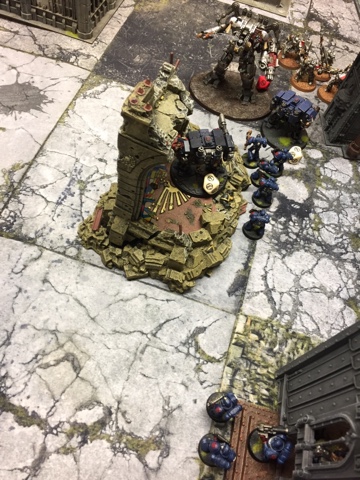 Once you grip the basic rules of the game if is pretty slick moving and the turns can pass fairly rapidly which is great as my key criticism of sixth/seventh edition was that it was overly complex and dragged out turns! 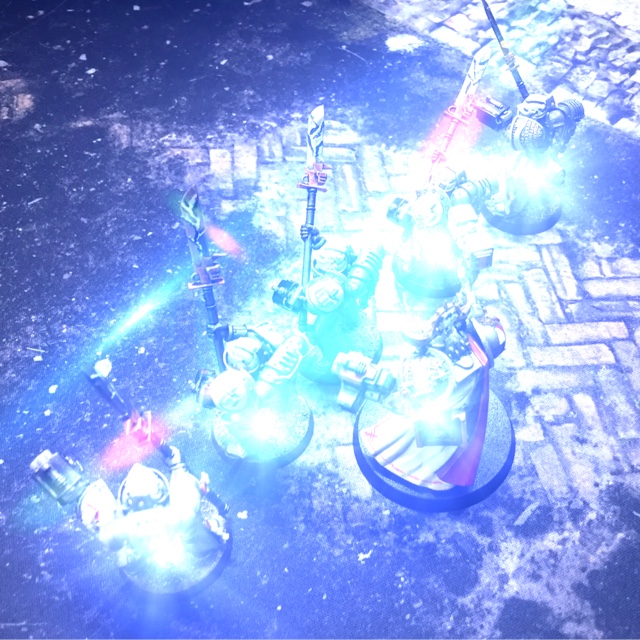 The psychic phase is 100 times quicker and simpler than its predecessors, and this makes it easy for psyker heavy armies such as the Grey Knights to dish out a load of psychic powers fairly rapidly... Such as Grand Master Voldorus and these friendly Terminators teleporting across the entire length of the table.... Nasty! 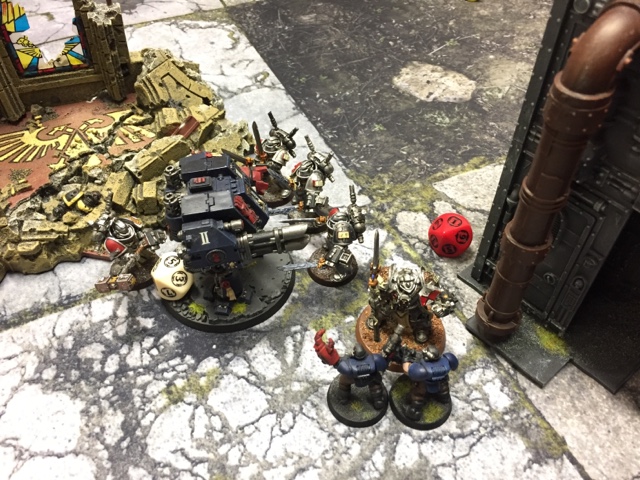 A key lesson learned by all today was that if you're going to attack something powered by a nuclear reactor with a big hammer then beware... 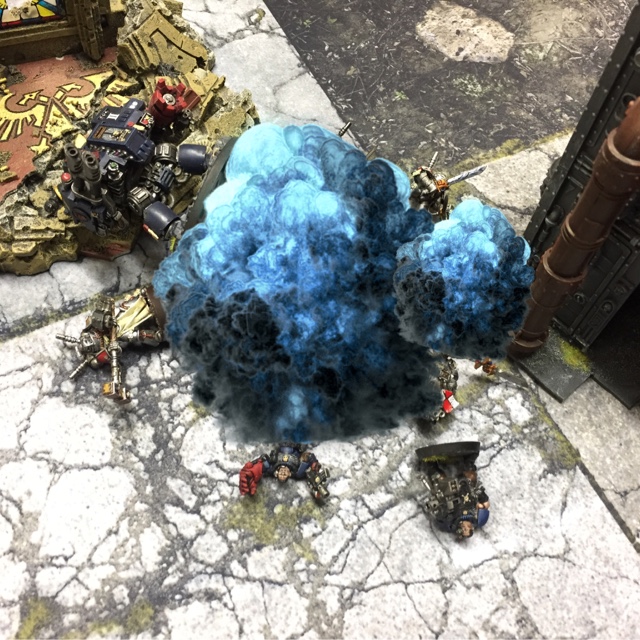 ... Because there is a one-in-six chance of it exploding and annihilating every other model nearby.... Whilst I mourn the loss of my scouts I have to say I was dancing around like a naughty elemental when my mate's entire squad of Grey Knights and lone surviving Paladin were brutally immolated!! 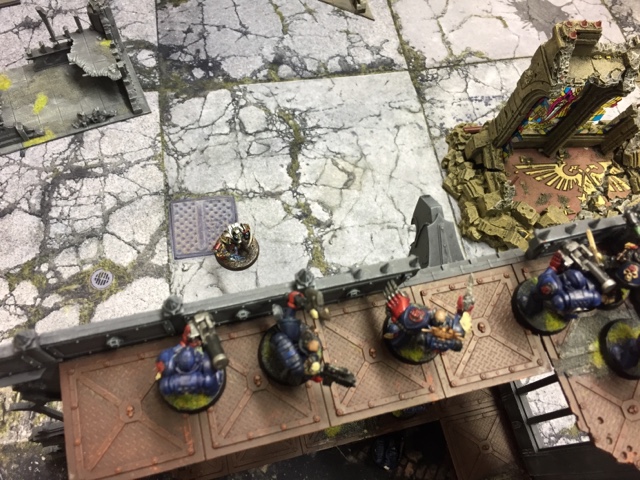 Despite most of the Grey Knights being taken apart with an arsenal of ranged firepower there was still one horrifying monstrosity slugging across the table towards my redoubt.... With a million wounds, terminator armour, storm shield and a sword that can bring down Titans Kaldor Draigo is an absolutely terrifying prospect!! 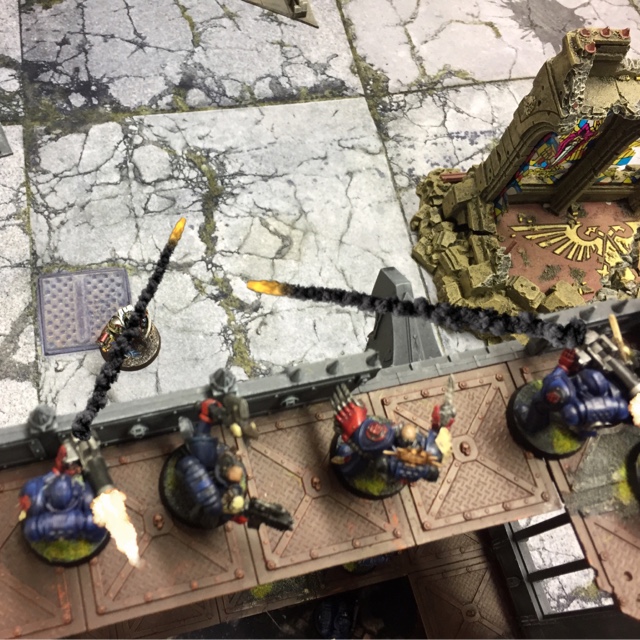 Hence I fired everything I had at him... Ironically the krak missiles did very little damage whilst a few lucky bolter shots managed to whittle him down to onlyone wound... I love stuff like this, where a few plucky tactical marines with nothing but bolt guns can achieve what the heaviest support weapons cannot! 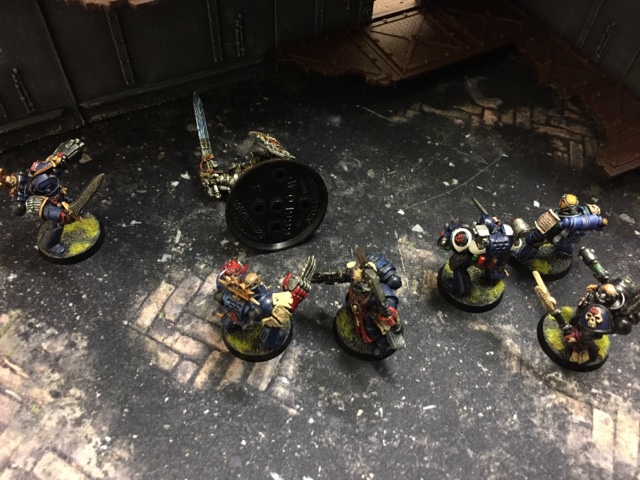 However despite bleeding from multiple wounds Draigo still manages to batter his way through the front door... Where he is met by every remaining marine left in my force.... Through sheer numbers and weight of firepower they slay the Supreme Grand Master! Here we see the Captain and Lieutenant giving each other a high five to celebrate!

Right.... I've played enough games now so I can say this.....I love 8th edition, it is the perfect combination of all the previous incarnations of the rules. There is the character focus of second, the speed of third and just the right level of complexity to add a variety of tactical challenges!! It really is a great rule set and I encourage everyone to give it a go...now... Well go on then!

I will certainly be playing it again in the near future!!

Posted by LegioCustodes at 09:36