So having played a few games of eighth edition 40k recently it has become clear to me that special characters are much more useful in this new version of the game! With this in mind I decided to replace the venerable brother-captain who has been leading my force of Crimson Fists since 2002 with a new commander! Clearly there was only one choice of new Warlord for my force.... Chapter Master Pedro Kantor! 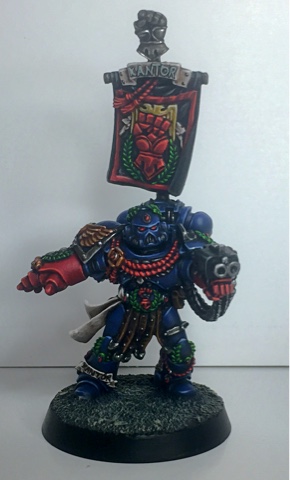 This model has been sitting undercoated on my workbench since 2012 so I'm pleased that I finally got the push to give this figure the paint job it deserved! I deviated from the 'approved' Games Workshop scheme as I felt it had to much gold on it, in fact it looks like the noble Crimson Fist has been taking fashion tips from the Custodian Guard!

With this in mind I replaced the multiple gold laurel leaves with green ones instead which I felt were a bit more realistic. I used a lot of layering on this model, adding a few extra graduated layers compared to my rank and file troopers. I'm really pleased with how he turned out though I'm not looking forward to varnishing him as I know this will take some of the 'edge' off the paint scheme! Next up I'm going to work on some new Devastators to bulk out my Astartes!