As some of you may have noticed I have been absent from the blogging scene for the last few weeks; I must apologise for my dereliction of duty! I had to go abroad with work for a little while and then when I returned I went straight into a much needed holiday, so hobby time has been restricted!

However I am back now and so I have decided to celebrate my return with a quick battle report of a game I played with my girlfriend yesterday.

She wanted to play as her usual alter-ego, the venerable Inquisitor Athena and so I obliged her, however I decided to mix things up a bit by fielding an equally potent Inquisitor against her. After a quick search through my collection I found an Inquisitor conversion that I knocked up about ten years ago, this fellow was armed with a storm bolter and sword and clad in baroque carapace armour.

As we have played a fair few games of second edition 40k together and have a fluid grasp of the basic rules I decided to make both Inquisitors Level 2 Psykers, with two powers each drawn from the Inquisitorial deck. We also took one strategy card each from the Dark Millennium box which were kept secret from the opposition, I really love these little game changers!


We then drew our mission cards, previously we have shown our mission cards to each other at the start of each battle, but this time we kept them secret in order to further enhance the fog of war, this little touch really added a layer of mystery to proceedings and meant every move had to be carefully considered.

With the initial preparation out of the way each Inquisitor then requisitioned two evenly matched forces of Space Marines for the battle. I took command of the Rogue Trader Era Salamanders whilst Athena commandeered the more modern Crimson Fists.

I placed my crashed Rhino terrain (see my last post) in the centre of the table to represent an objective in case anyone had drawn the Take and Hold mission (which I had).

Both of us set about placing our forces, trying to position our heavy weapons in good overwatch positions whilst our assault troops moved to areas of hard cover prior to the inevitable charge across no man's land.

Inquisitor Athena sighed as she moved forward through the devastated masonry of the ruined monastery of Hadley's Hope. The place was deserted and in two hours of investigating neither her nor her escort of Astartes had found anything of note, she was starting feel that this whole enterprise was naught but a fruitless endeavor. Just as she was about to call a halt her vox crackled to life, it was Captain Eldorado, strike commander of her Crimson Fist allies. 'Inquisitor, my lead Rhino has spotted movement up ahead, shape and size would indicate power armour, most likely Astartes.'
She shook her head, there should be no other Space Marines operating within this entire sector, just as she was about to voice her response her vox buzzed again, but this time the transmission hissed with the static of someone hacking her frequency with a contraband vox-thief.

'Ah, Athena, how unfortunate to see you here you meddling fool.' She gasped, recognising the voice instantly as that of the radical Inquisitor Simba Calderone, he's distinctive tone sounded like a low rumble over the vox. 'I thought I was rid of you at Proxima Centauri, but alas here you are again...always turning up like the proverbial bad penny...well you will learn not to meddle any further.'

Suddenly there was a loud crack, the distinctive sound of a missile launcher discharging it's lethal payload, this was echoed moments later by an almighty explosion as the Crimson Fist's sole armoured vehicle erupted into flame and smoke as the krak missile penetrated it's armour.

Inquisitor Simba's voice returned, 'Did you like that little display? I hope so, because it was just the starter...' His voice disappeared as he cut the link. Athena drew her plasma pistol from it's harness and flicked the activation rune in its ornate grip, simulatneosuly she activated her vox to all of her Astartes, 'Prepare to repel attackers...show them no mercy!'

And with that battle was joined... 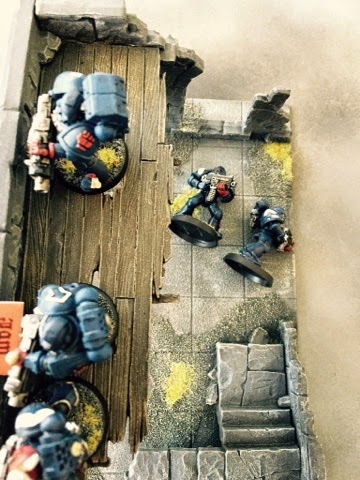 The first few turns of the game involved the assorted Space Marines jostling around the table in order to set themselves up for later phases of the battle, meanwhile a few fortuitous shots were fired by both sides devastators and they were able to cut down a number of foes with their heavy bolters.

I quickly played my TRAPS strategy card early on whilst the opposing forces were still close together. I focused the booby traps in the centre of a group of terminators and tactical marines in order to maximise the potential damage.

These nefarious booby traps caused a number of volatile explosions eventually resulting in two dead Crimson Fists who were rapidly dispatched to meet their God-Emperor! 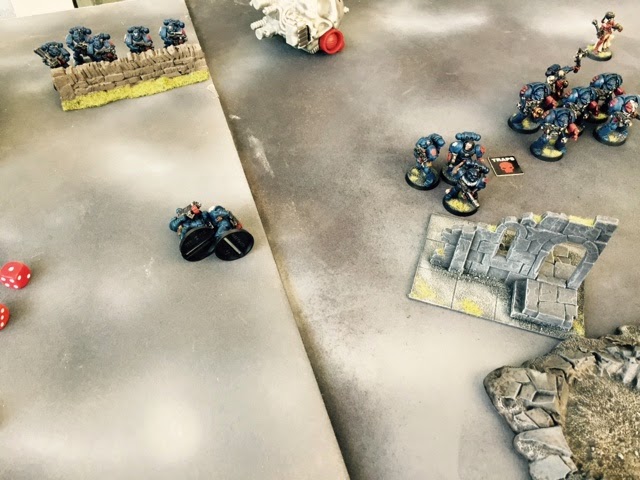 Athena immediately retaliated by using her own strategy card and thereby deploying an absolutely humongous orbital barrage on my Salamanders. Things looked bleak for the little green fellows...until her template deviated ten inches into the middle of nowhere...thank the gods of fate!!

As the battle wore on more and more squads were gradually whittled down by accurate bolter fire from the line marines of the tactical squads. 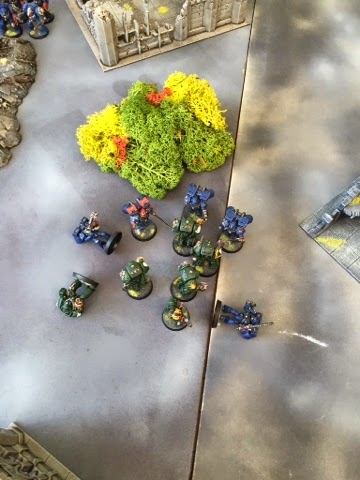 Athena's brave assault squad decided to jump forward eighteen inches and then charge the Salamander Terminators...a bold move, but one they paid for dearly. 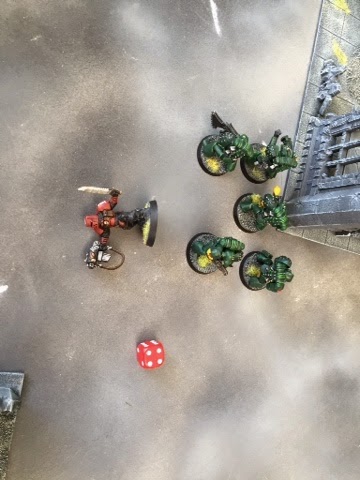 Athena then decided to show everyone why she is the meanest bitch in the forty-first millennium by engaging the enemy Inquisitor in a psychic duel...presently blowing his brain out of his arse using nothing but the power of her mind!! Impressive stuff...needless to say there were a few tears for my dead Inquisitor!!

The Salamanders devastators retaliate for the earlier death of their dear brother by slaughtering an opposing squad with volleys of heavy bolter fire...praise the Emperor for targetters and sustained fire dice.

Gradually the Crimson Fist jump-packers pay the price for their fool-hardy leap into the teeth of the enemy, their demise is quickened by the intervention of further Salamander reinforcements. 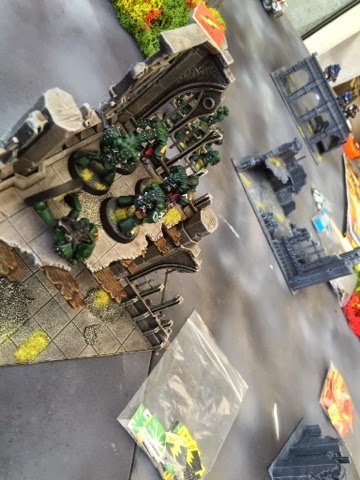 The second Salamanders devastator squad shelters in the ruins of the monastery and engages their opposite number in a heavy weapons duel across the open battlefield.

Athena's force had drawn the Dawn Raid mission and so needed to get a squad into my deployment area in order to claim those five valuable victory points, with this in mind the veteran brothers of Terminator Squad Garcia sprinted forwards accompanied by their strike commander. Simultaneously the inquisitor used her own prodigious psychic powers to start stripping wounds from my Captain!

Realising the danger in their midst every single Salamander presently opens fire on the Terminators, but the tactical dreadnought armour proves its worth and only one of the mighty veterans fall. Yet their heroic efforts are not enough and these ancient warriors remain three inches short of their objective!

Meanwhile my own assault marines (who had been conspicuous by their absence thus far) then emerged from hiding and leapt sixteen inches forward to seize the central objective, thereby completing my own Take and Hold mission! Hoo-rah!!


After four hard fought turns the smoke of battle began to clear and it was apparent that the devastation had been epic in it's proportions. Dead space marines littered the ground and many more were wounded both in body and mind.

A victory to me (despite the loss of my Inquisitor)! However please don't be fooled by the numbers above, the result was actually a lot closer than it seems and it wasn't until the very last turn that I was able to secure those precious VP's.

Overall this was a great game and we both had a lot of fun, It was the first time we have used psychic powers and my girlfriend really enjoyed them as they added a whole new layer to the game and a range of different tactical options to consider! We will definitely be using them again in out next confrontations!

I am looking forward to getting my genestealer cult ready for our campaign so that I can field a different force to Space Marines for a change and experience the 41st millennium as a gribbly baddy!!

Posted by LegioCustodes at 13:06