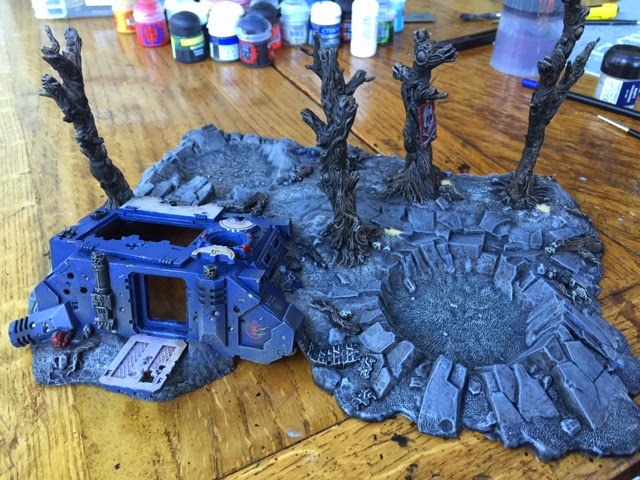 It was a crashed Rhino diorama that I had purchased some years back, and like so many models it had been glued together sprayed Chaos Black and then thrown into a box and forgotten about.

As I looked at it I started imagining all the various possibilities that this particular terrain piece could be used for in a narrative campaign. The opportunities really are endless, perhaps this vehicle was carrying some vital piece of equipment that needs to be secured or maybe a high ranking Space Marine Commander is trapped inside and awaiting rescue!

With images of glorious rescue missions fixed firmly in my head I grabbed this fine looking piece of scenery and scuttled back to my man cave to complete it. I decided to paint the ground and craters in the same manner as the rest of my terrain, particularly my pre-existing collection of craters...so that they would all look coherent on the battlefield as opposed to a mish-mash of disparate pieces. I find when painting up scenery it is vital to get this degree of unity between the assorted pieces, otherwise things tend to look out of place.

The paint scheme of the vehicle itself was really a no brainer for me...I painted it the deep blue of my own Crimson Fists army, further helping to develop the potential narrative of any future missions that it may be featured in. The dead Space Marine also wore the livery of a Crimson Fists Tactical Marine whilst the assorted dead guardsman were clad in the colours of my own Inquisitorial Storm Troopers.

Overall I painted this as something of a side project while I was waiting for the paint to dry on other models (my Necromunda Orlocks), that being said I still finished it within the space of one afternoon which was pretty good going.


I'm really pleased with how this turned out and I think it's going to add some great depth and options to my future games. The easy completion of this piece seems to have given me the bug for terrain production and I have already found myself digging through the bitz box for my next potential gem.