My awesome girlfriend took me to Warhammer World for my birthday so that I could play against her on the fabulous scenery located there! It was the best present she could have given me and I thoroughly enjoyed myself in the bespoke gaming hall. 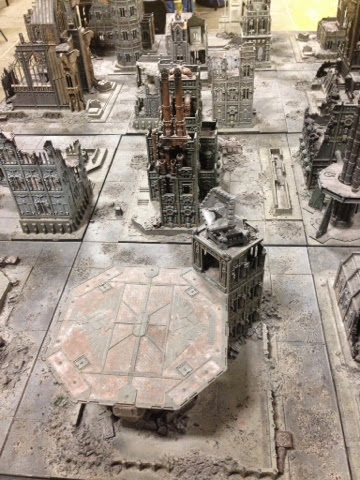 There was however a slight mishap early on as I dropped a full tray of fifty of my Rogue Trader Salamanders onto the stone floor (seriously who makes a gaming room floor out of fucking stone... I don't know why they just didn't make the floor out of molten lava to ensure maximum damage)! Sadly all the marines incurred damage, the plastic RTB01 models lost a fair proportion of their limbs whilst the soft lead of the metal beakies dented easily. Initially I was in absolute shock; I just stood their staring at the travesty with my mouth open...

Luckily my amazing partner quickly rallied around and helped me retrieve the shrapnel that had once been my proud Salamanders...before getting me a cup of tea. She also listened to me rant and rave as I bemoaned my station in life!! If it hadn't been for her I am fairly sure I would have had a full blown breakdown before embarking on a massacre and gunning down the other gamers...especially the man who stepped on one of the backpacks!!

I shuffled over to the sales point and bought £8 of glue (none was offered for free...a sad reflection of the times at GW) and spent 45 minutes enacting some temporary battlefield repairs in order to be able to get a game in (we had spent four hours travelling to get here).

Once my work as an impromptu apothecary was done I set about setting up a game on a mind-blowing 8ft by 6ft cityscape!!

I'm not lying...the terrain was so beautiful it aroused me!! See the pictures and tell me you don't agree.

The forces again were my (now-crippled) Salamanders against my Crimson Fists. 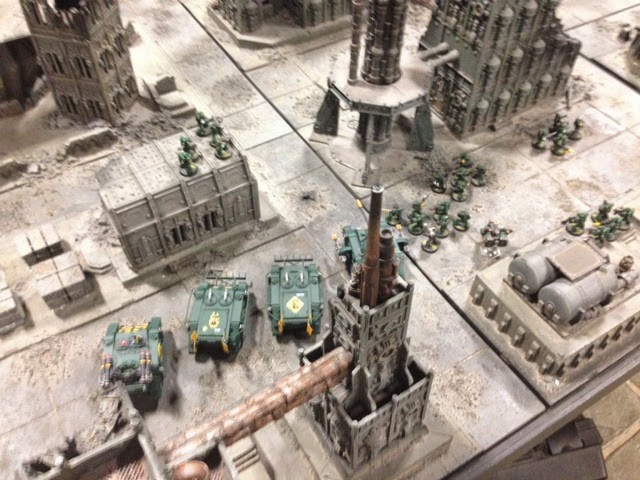 We decided to set up opposite each other utilising a diagonal deployment zone with a mission to seize the only non-ruined building located roughly in the centre of the table.

With this in mind our forces were quickly deployed, hordes of tanks and infantry pouring into the ruined city whilst small teams of scouts (I used original 1980s Guard as proxies for the Salamanders) infiltrated into the abandoned hab blocks. 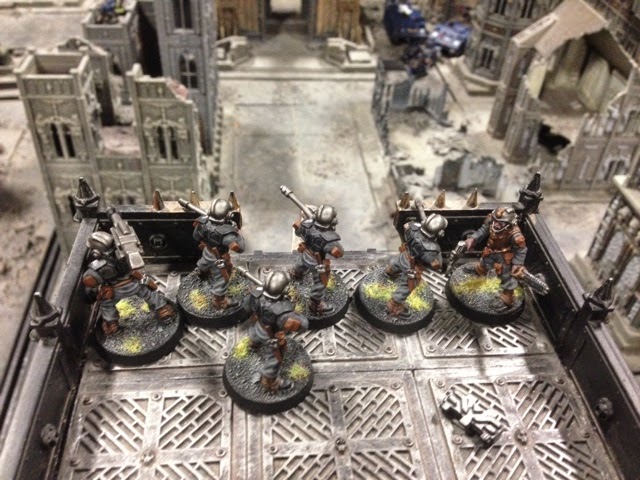 My own scouts set themselves up in this ruined building in order to get a commanding view of the battlefield.... 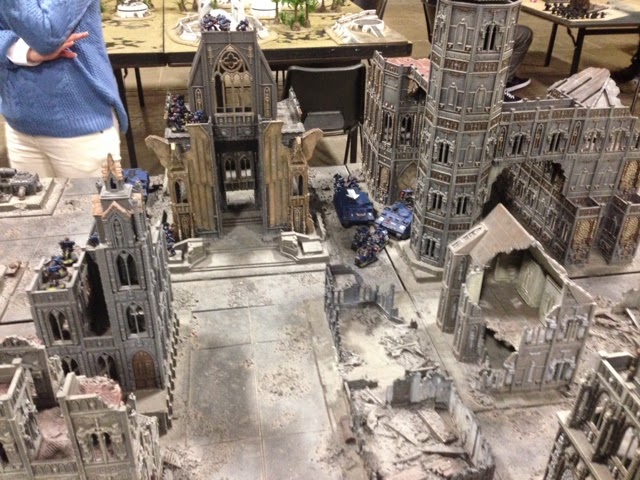 Only to find that some unwanted neighbours had moved in opposite them...an opposing squad of scouts with a group of Devastators supporting them. 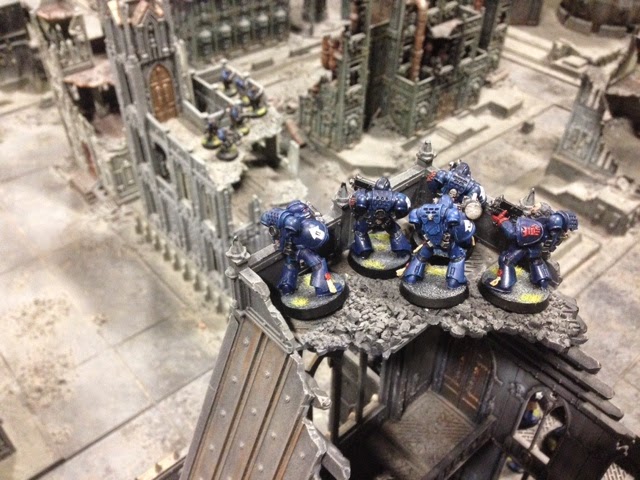 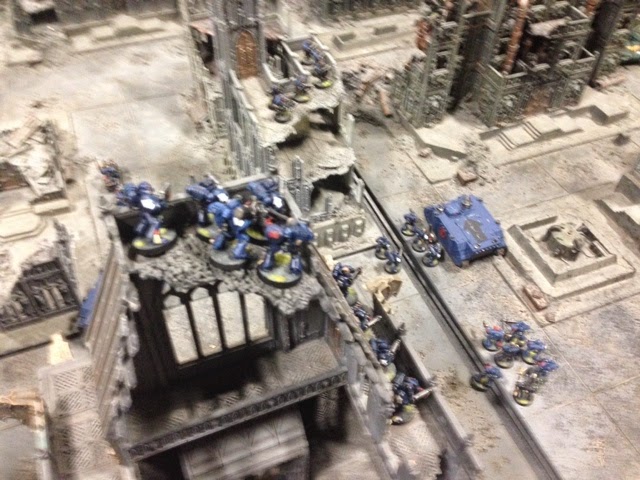 The Crimson Fist Devastators and Scouts were ideally placed by my girlfriend in order to provide support for the steady advance of her  ground troops... 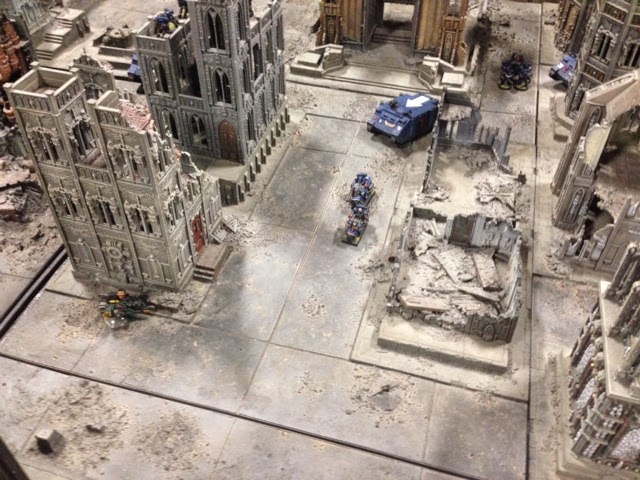 These aforementioned ground troops consisted of an armoured column supported by infantry in depth (vital for urban warfare in order to secure those vulnerable flanks). These were additionally protected by a fast group of Space Marine outriders mounted on bikes... Though these forward troops didn't realise that my own fast moving land speeder was laying in wait for them. 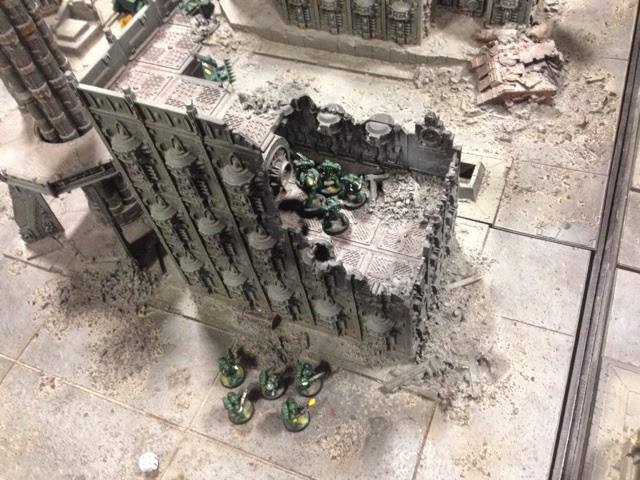 As the Crimson Fists were advancing so to were my Salamanders ... Stealthily creeping through the rubble strewn city utilising the ruined buildings for cover... 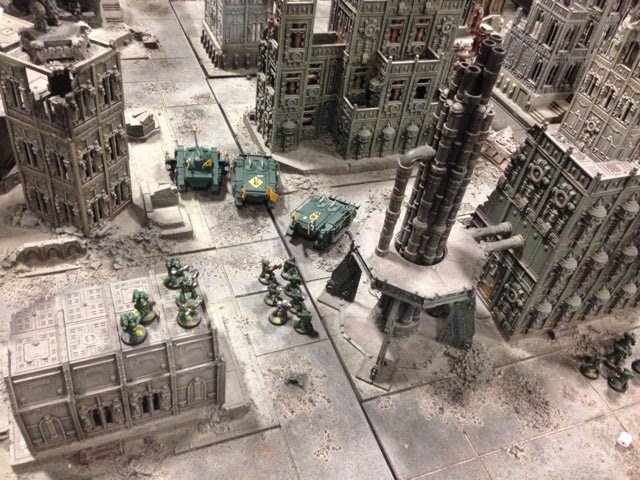 ...Whilst their own armoured vehicles sped towards the objective building. 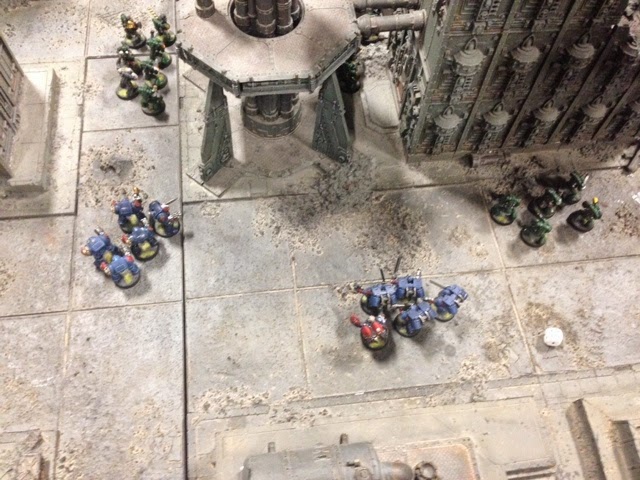 However no plan survives contact with the enemy and the Salamanders enhanced hearing soon picked up the whine of Thunderhawk engines in the distance.... As they craned their necks to look at the advancing craft they were dismayed to see that it was not painted in Vulkan's emerald green but rather the deep azure of their foe. Before they could warn their commanders the ship's drop ramp had opened and five Angels of Death descended on wings of flame as their jump packs carried them onto the battlefield. The Salamanders cocked their weapons and prepared to slay these newcomers however their situation was still worsening... Their was an actinic stench as the nearby air ionised and five hulking brutes in blue Terminator armour appeared from the warp... 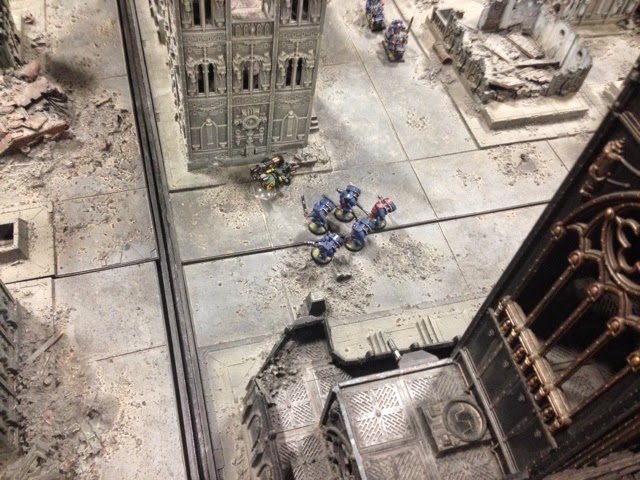 Whilst another five blue assault marines appeared further along the table edge... 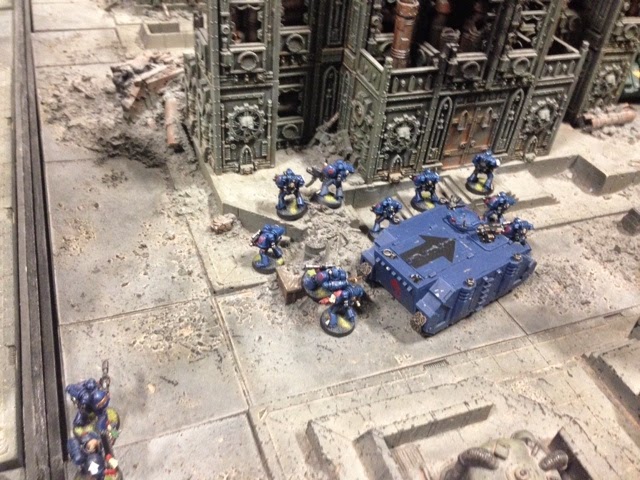 With their deep striking troops occupying the Salamanders rearward lines the Crimson Fists armour reached the objective building unopposed and a full tactical squad hastily deployed on the front steps. 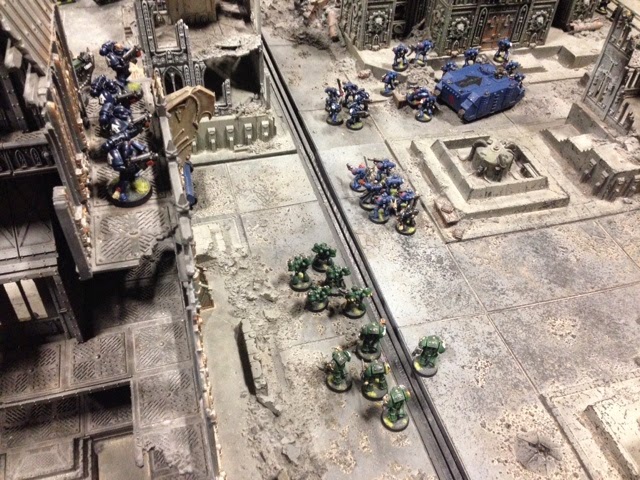 However now the Salamanders were ready to deploy their own deep striking troops and their assault marines jump packed into fray whilst more Terminators teleported down. 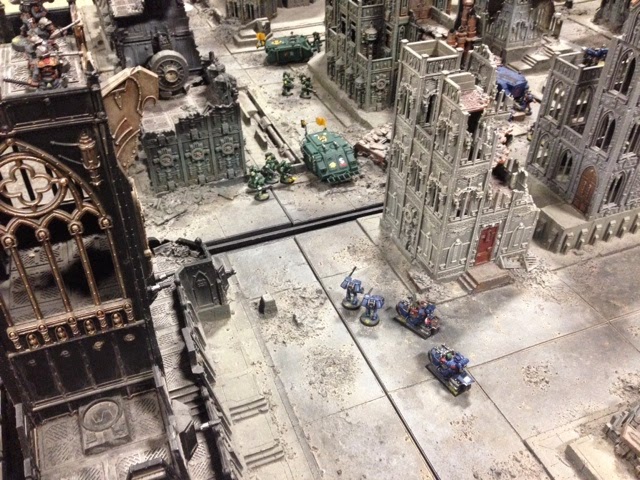 The combined force of bikers and assault marines on the flank easily eliminated the old fashioned Land Speeder before rolling towards the main edge of battle. 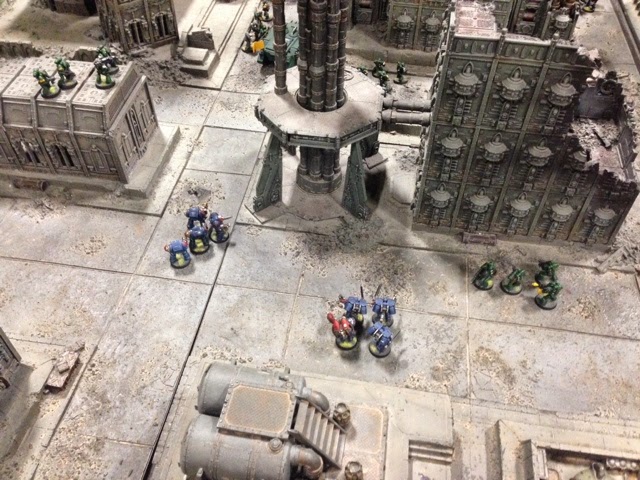 ...As the Terminators and Assault Marines shot and butchered all in their path... 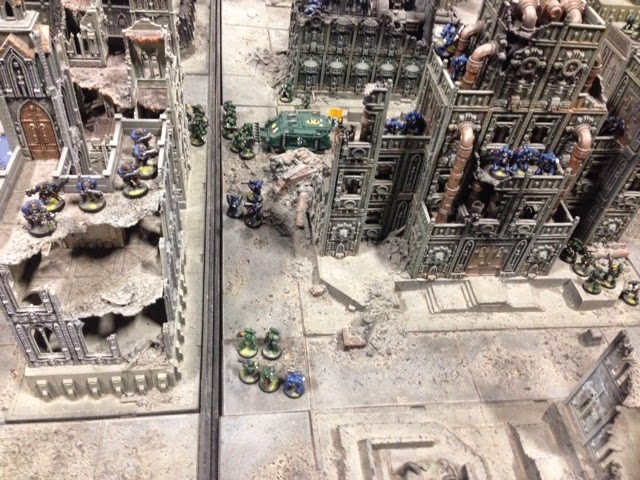 Simultaneously the Salamanders forward troops also managed to rol into the objective and soon the full fury of two chapters was unleashed as bolt rounds and fire shredded the ruins, blood slick under foot as the Emperor's finest cut each other down with a prayer on their lips. 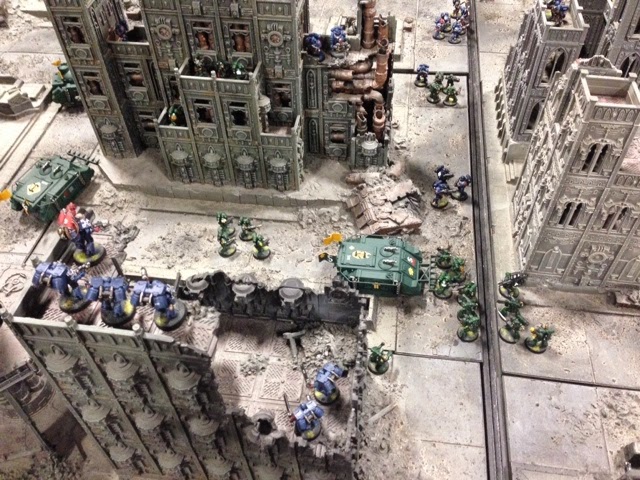 Two units of Crimson Fist Assault Marines position themselves in the high ground; revving their whetted chainswords as they prepare to descend on the unsuspecting Sons of Vulkan. 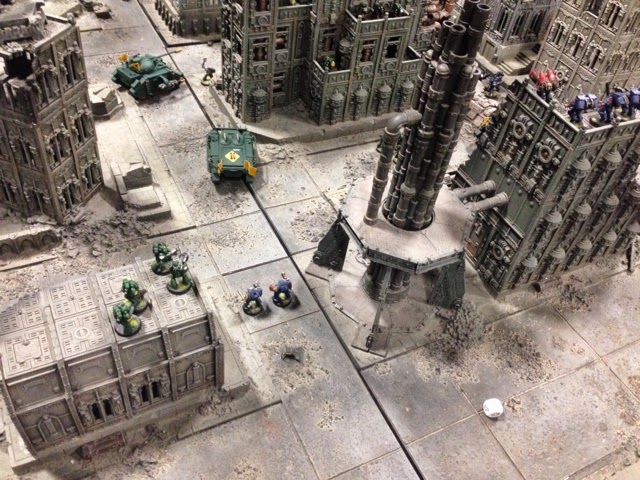 Finally the Salamanders Predator has moved far enough forward to bring its autocannon and lascannons to bear on the cowering scions of Rogal Dorn...time to die! 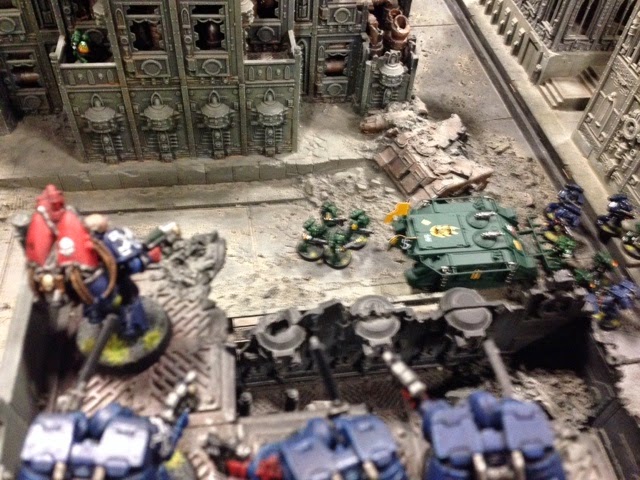 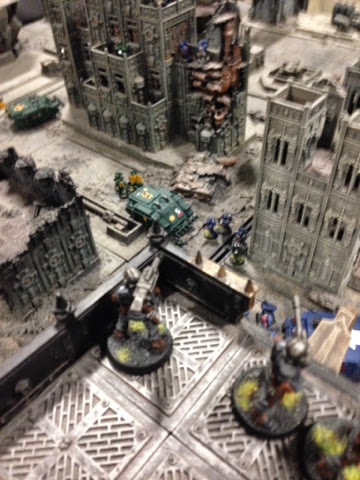 Unusually both sets of scouts survived the entire battle (they're normally the first to die thanks to their paper-thin armour) providing a good level of fire support to their battle-brothers with their bolt guns and more telling a Heavy Bolter. 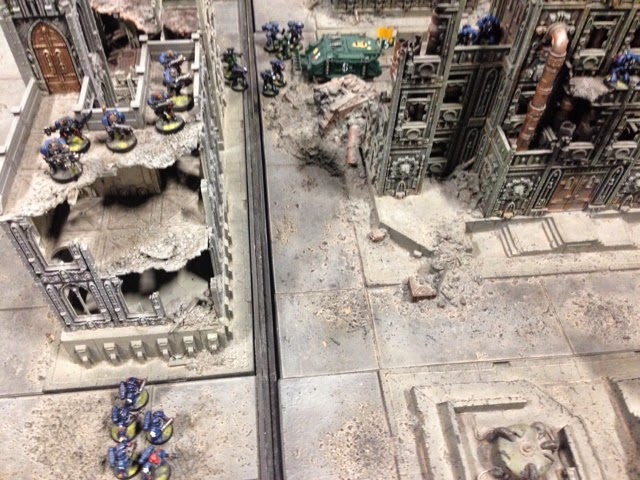 Overall the game was very close (we played four turns) with a lot of carnage and short range butchery but I would say my missus marginally had the better of me!!

It was absolutely fantastic fun to play on such eye-watering scenery and I was entirely immersed in the battlefield as the marines manouvered around the terrain. It was an experience far above my normal games thanks to the locale and I am forever indebted to my girlfriend for making this happen.

With the game concluded we packed up our forces and retired next door to Bugman's Bar (GWs in-house Warhammer themed restaurant) for a burger and a few pints of beer. 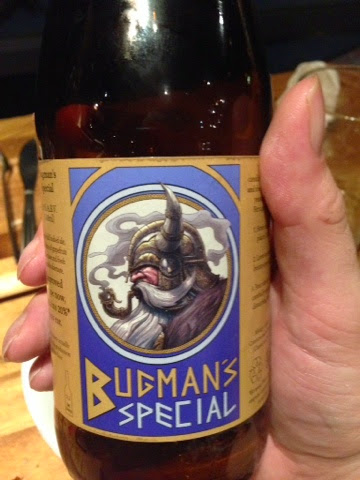 The beer was really rather good; and the food was excellent...additionally there were a few well known faces from GW there which amused me. After we had eaten (a lot) we drove to our hotel for a good night's rest before getting ready to return for another days gaming the next day...

Posted by LegioCustodes at 14:14