Here is the second part of my warhammer themed birthday report....

Day two of the weekend started early with my girlfriend and I returning to GWs flagship building to get another game in. We skipped breakfast at the hotel so that we could eat at Bugman's! I have to say the GW breakfast was excellent and absolutely massive...I don't think I've ever seen a fry up so big... To be fair by the end of it I wanted to go back to bed just to sleep off the feast!! 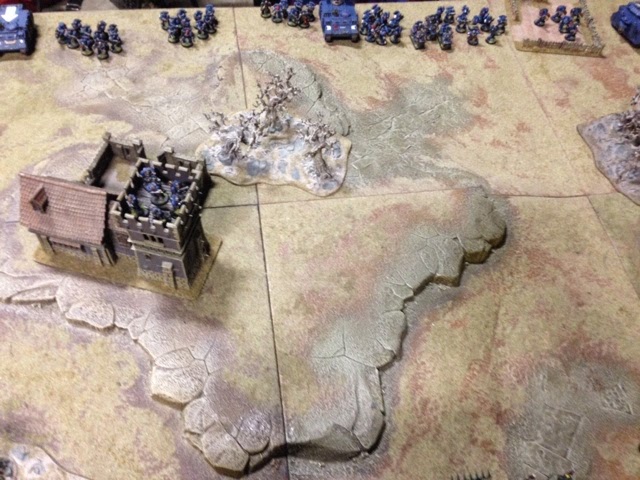 Nonetheless I overcame the urge to sleep and we went next door to the gaming hall and quickly found our allocated games table. After yesterday's massive battlefield today was a bit of a down sizing to a more conservative 6x4 table. The table we were allocated was actually bedecked with Warhammer scenery, but instead of scouting around for 40k terrain I found I actually quite liked the medieval atmosphere and so decided to use it to represent a feudal world on the outskirts of Imperial space. 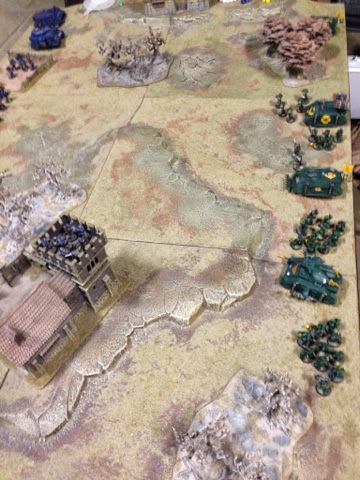 The forces were yet again (unsurprisingly) my Rogue Trader Salamanders against the modern Crimson Fists. The forces deployed opposite each other in a linear format with teams of scouts creeping forward to occupy the suitably mediaeval buildings in order to dominate the battlefield. 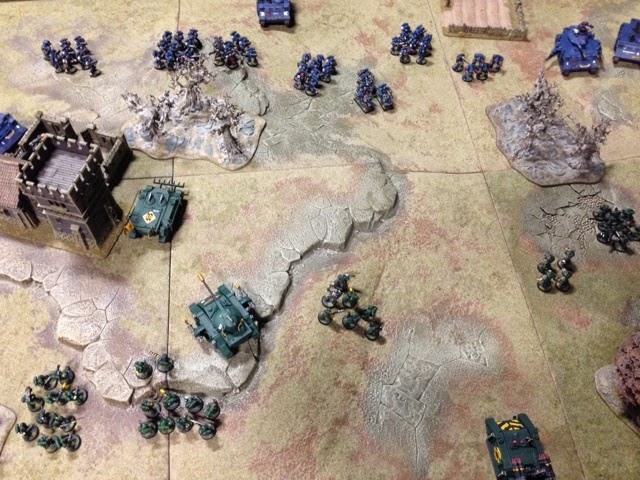 Very quickly the two armies began to close in on each other with the opposing forces desperate to get into bolter range. The Crimson Fists scouts in the left building once again proved their worth...by dying in a blitz of blood and shattered armour...truly it amazes me how any scouts ever survive to become full battle brothers...The Space Wolves have the right idea by sticking their Blood Claws straight into power armour, no wonder the sons of Russ are able to maintain a force larger than the codex dictates! 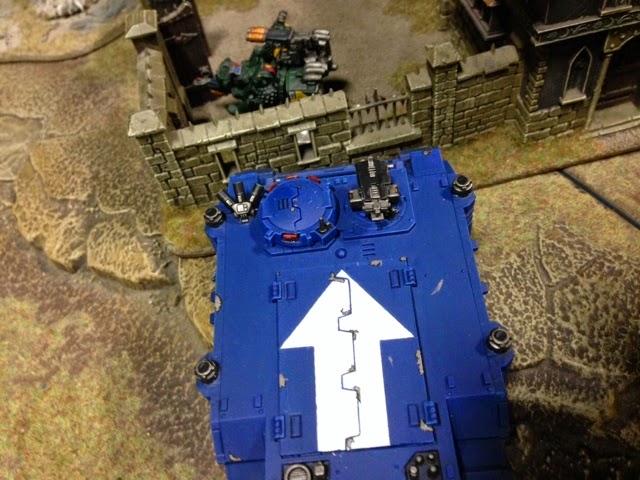 The Salamanders land speeder whizzes forwards to occupy the nearby courtyard but the Crimson Fists deploy a Rhino to try and gun it down with its twin linked boltgun...no such luck! 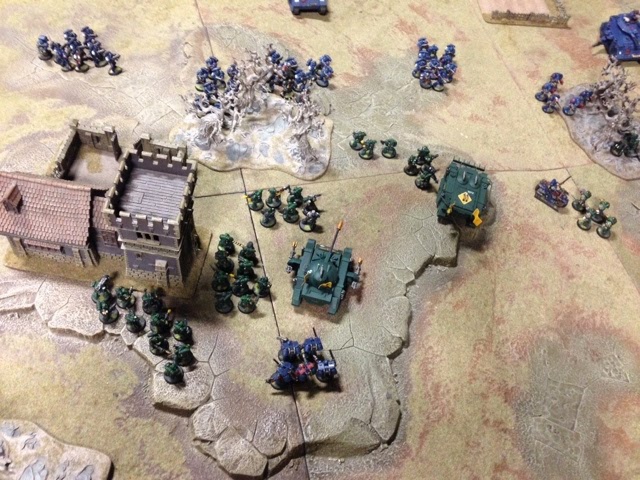 Within a few turns the Crimson Fists and their deep striking troops do a solid job of pushing my Salamanders into an increasingly defensive position focused around the main farmstead. 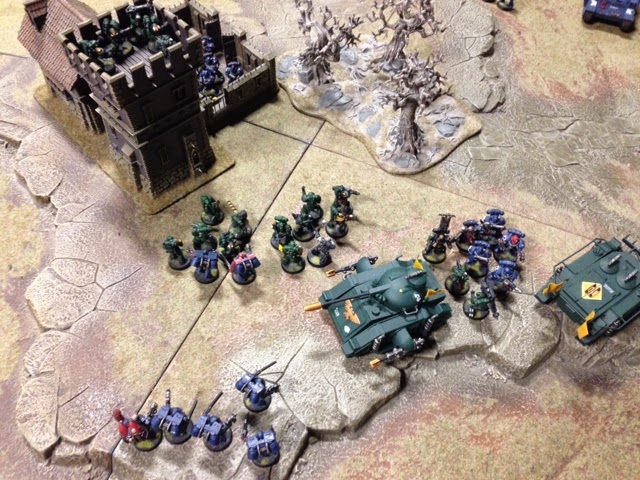 Deciding to reinforce this position more of my assets rush across the battlefield to repel the Crimson Fists assault forces, and soon it becomes a quasi-siege affair around the building. 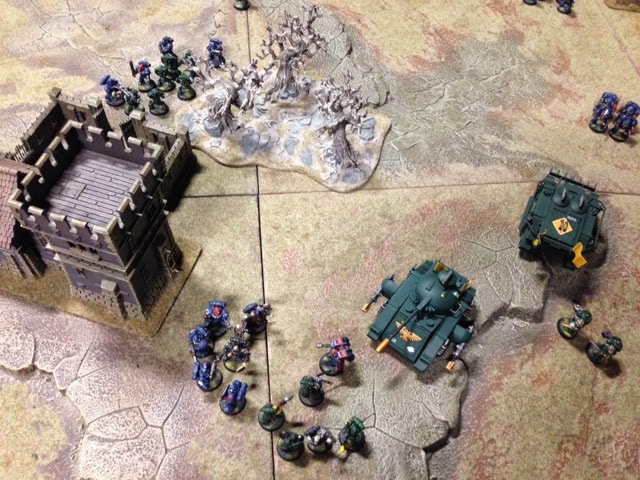 Which results in a period of extreme butchery with both sides incurring heavy casualties from both close range fire fights and the whirring death of chainsword blades. 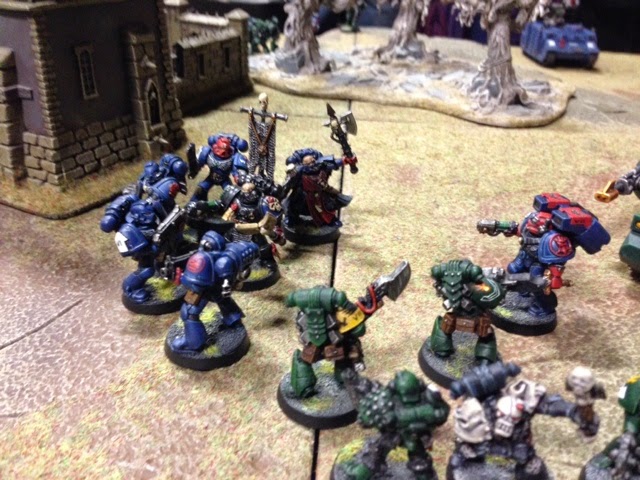 In a heroic, cinematic finale the two opposing command groups pile into each other and the Astartes leaders go toe-to-toe to see whose chapter is the strongest. 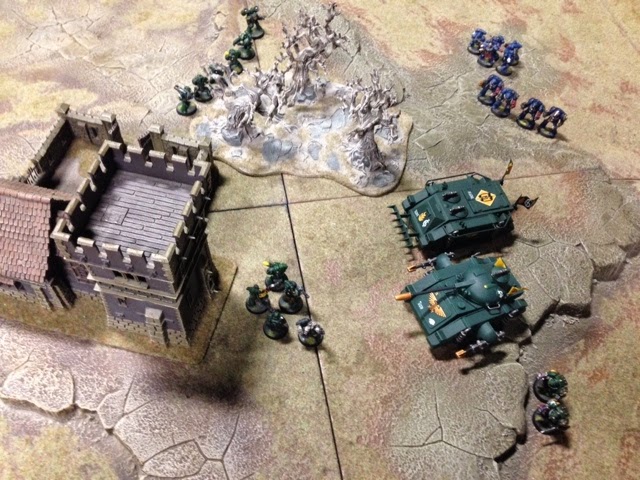 As the smoke cleared and the gods of war tallied the butcher's bill it was clear that the Salamanders had won this round. So unusually it was a victory to me which made the total for the weekend 1victory each!

With the game concluded I popped over to the sales counter for a quick perusal... Uniquely the Warhammer World Store has Forge World products that you can purchase from point of sale.... This proved to be my downfall and I ran amok impulse buying all sorts of a Horus Heresy goodies, most notably the Loken and Abbadon fight diorama! I am looking forward to getting these bits assembled and painted.

Overall it was a fantastic weekend and I am grateful to my wonderful girlfriend for organising it all for me. The other gamers loved seeing my old 1980s models and they garnered a lot of interest and queries from staff and visitor alike. I would heartily recommend a visit to all you fellow Oldhammerers out there...you'd be surprised at how many 'mainstream' gamers get misty eyed when they see your classic models on the table!
Posted by LegioCustodes at 15:20