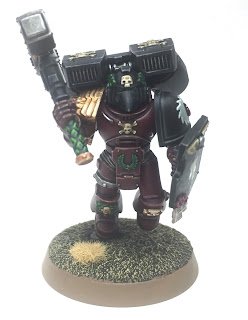 So as promised in my last post I have spent this week working on an HQ Character to lead my steadily expanding Flesh Tearers Force into battle for Sanguinius and the Emperor of Mankind. 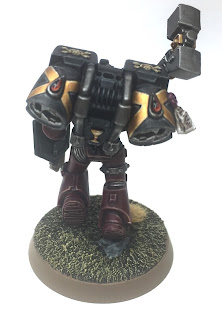 Having experienced the unpleasantness of being on the receiving end of my best mate’s Ultramarines Smash Captain a few weeks ago I decided that I would have to fight fire-with-fire..... and so I built my own Smash Captain!

Thanks to the Blood Angels special rules and bespoke stratagems this fella is likely to be even more deadly than his blue armoured counterpart! 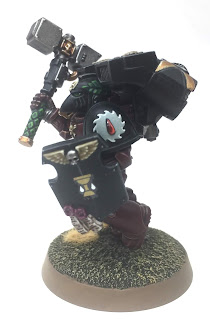 For those of you who don’t recognise the term... a Smash Captain in Warhammer 40,000 is a Space Marine Captain (usually Blood Angels or Space Wolf) equipped with a thunder hammer, jump pack and sometimes a storm shield.

This potent combo allows the character to deep strike, Smash up most opponents with the hammer and survive huge amounts of enemy attacks... Nasty! 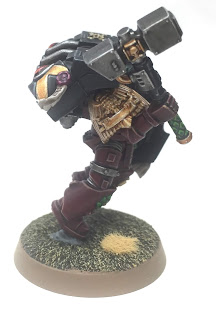 In keeping with my theme of old power armour marks I have equipped this officer with Mark VI Corvus power armour made up of components from a vast number of Space Marine and Blood Angel boxsets.

This use of old armour allows me to play this Force as current 40k Flesh Tearers or as 30k Blood Angels 5th Company under Captain Amit right at the end of the Heresy!

I massively enjoyed painting and assembling this guy, so I might work on some more Flesh Tearers characters soon!!

Posted by LegioCustodes at 00:12