I am pleased to say that my first models of 2019 are finally done.... phew... and I actually managed to do a whole squad before the end of January! 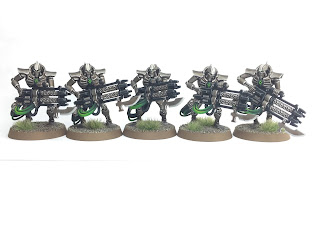 Having successfully completed a total of sixty Necron Warriors last year I decided to go for a slightly heavier troops choice this time around in the form of a squad of Necron Immortals. 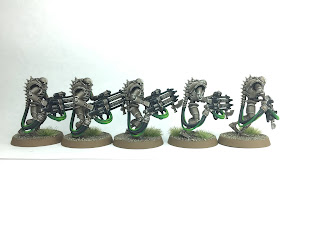 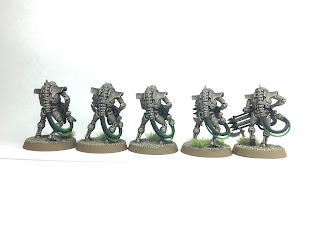 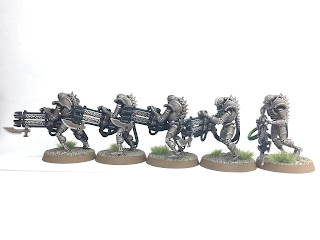 Under eighth edition rules these guys have a better armour save and much more powerful firearm than their basic warrior counterparts. Meaning they are both more durable and pack a far harder punch.

To keep a sense of continuity throughout my army I used exactly the same paint scheme as the one that I applied to the warriors. I really enjoyed painting these guys as they had a little more detail and bulk to them. I put them on 32mm bases to differentiate them from their more rudimentary robot peers.

I figure that these guys will be pretty useful in the game for thinning out Marine and Terminator equivalents whilst their warrior brethren absorb enemy firepower.

I liked these guys so much that I have already started another five man squad of Immortals to provide a little more heavy support.
Posted by LegioCustodes at 13:17