So having spent an absolute age painting my Flesh Tearers Drop Pods over the last few weeks I was keen to get them on the battlefield as soon as possible in order to recoup that vast investment of both time and effort.

Luckily my best mate has just moved nearby to where I live and he is looking to get back into the hobby and already has a large Black Templars Force.

So we set aside an evening for a game of 100 Power Points per side over the weekend. 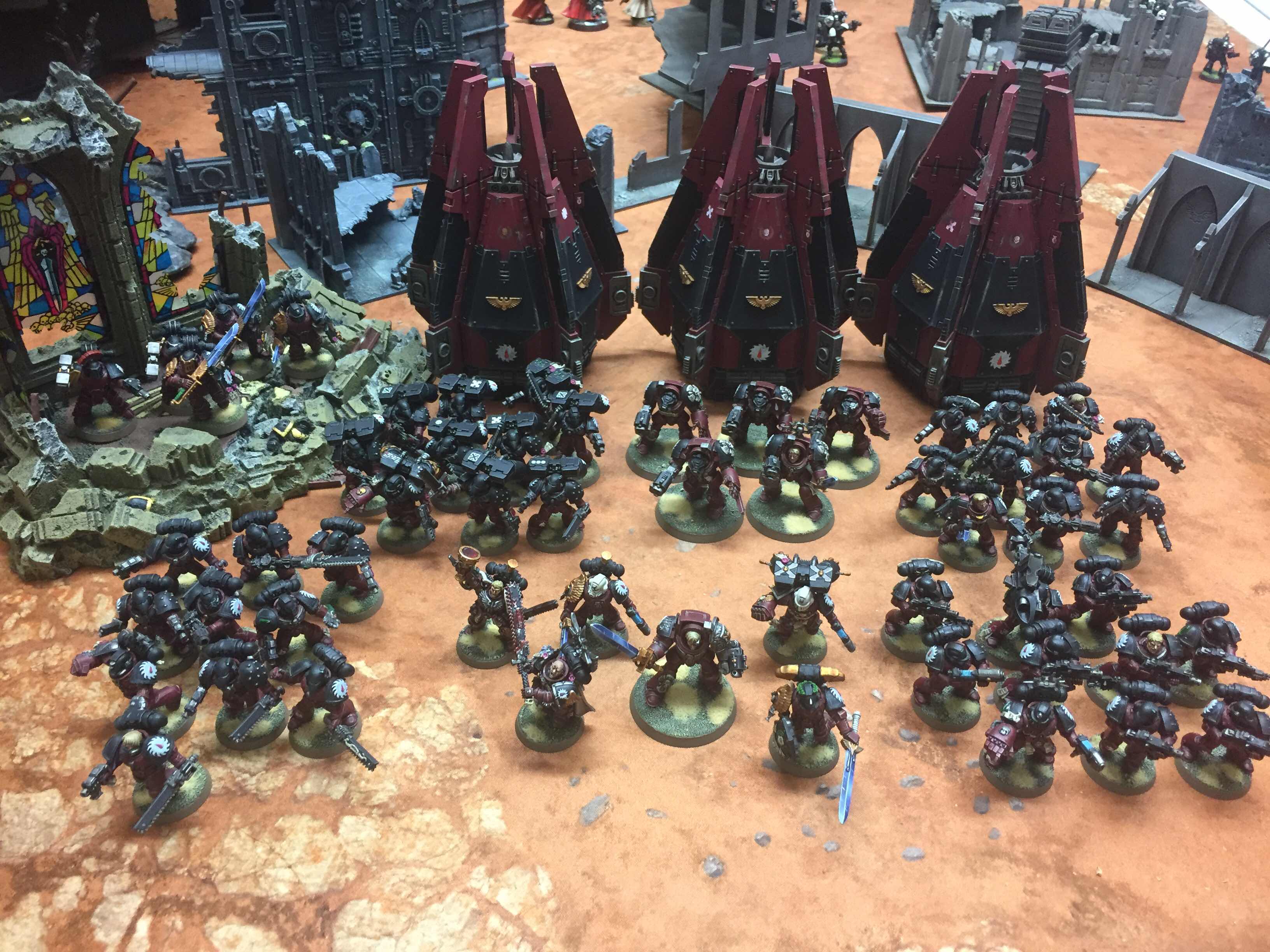 For my force the choice of units was fairly simple as everything I currently have painted up for the Flesh Tearers comes to bang on 100 Points.

This consists a Veteran Squad, 3 Assault Squads, a Terminator Squad and a Tactical Squad. 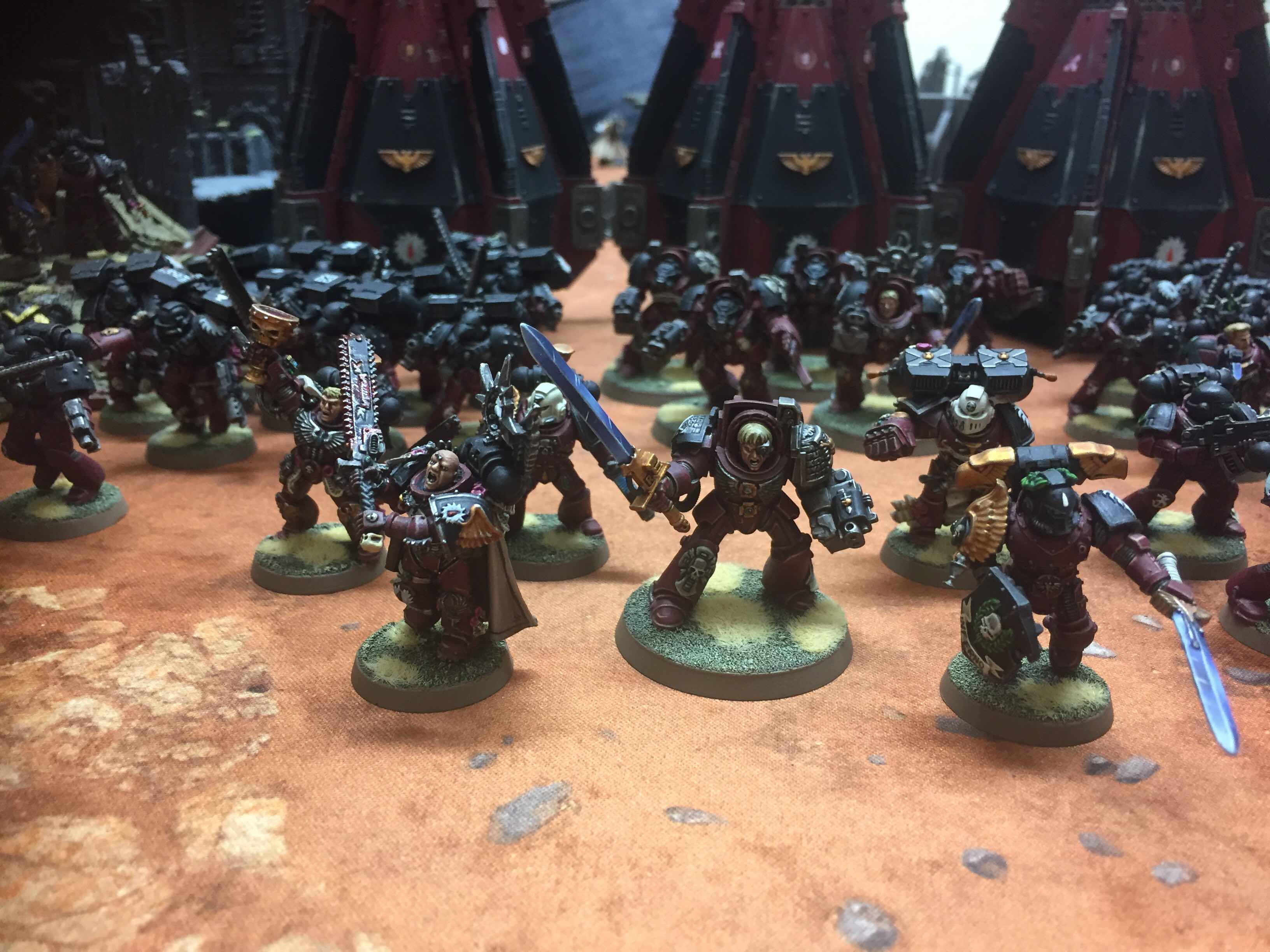 This force is led by Chapter Master Gabriel Seth; a Terminator Captain; Two Lieutenants; a Sanguinary Priest and a Company Champion.

Transport for this force was provided by my three new drop pods. 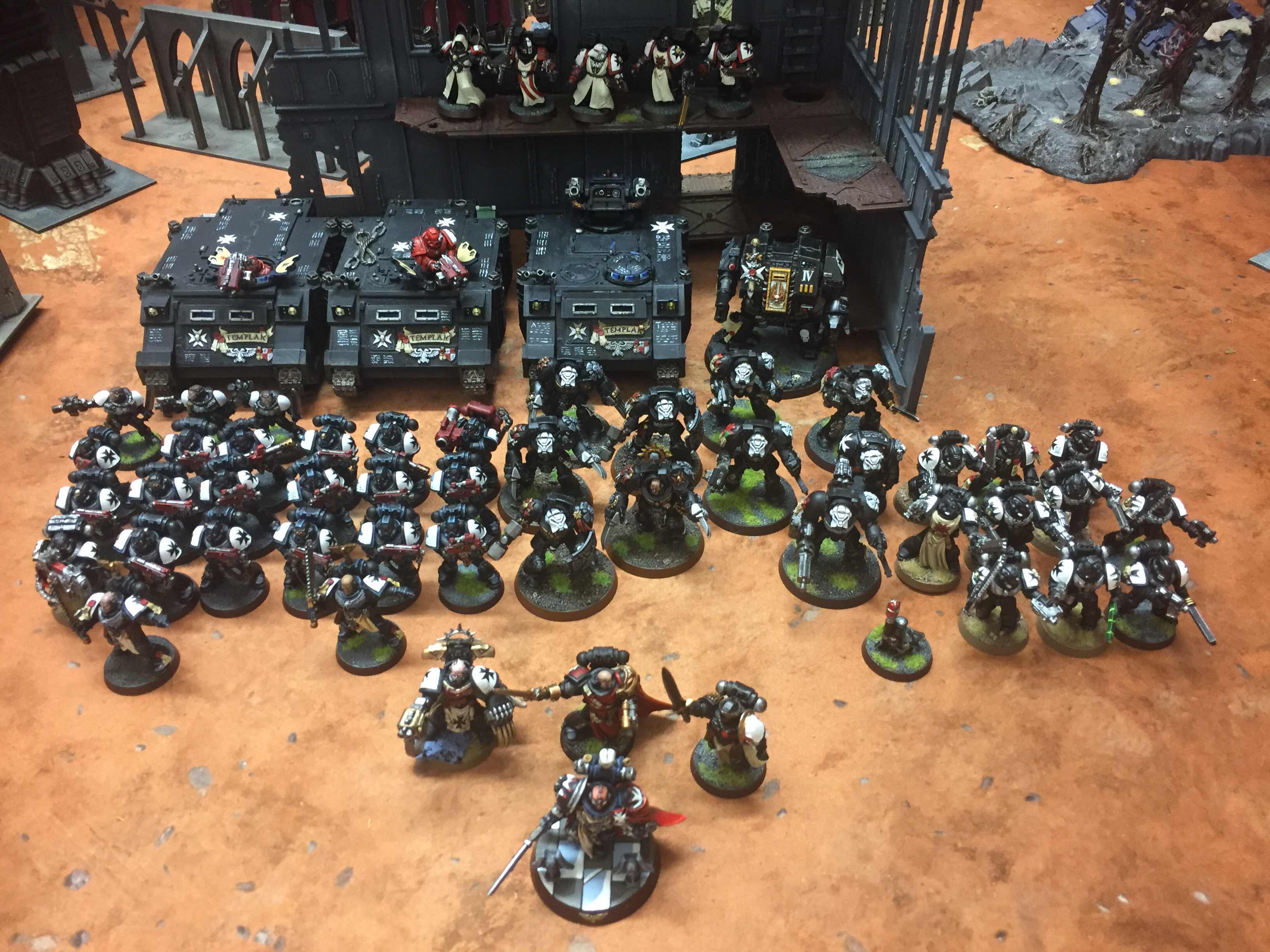 The Black Templars Force consisted of three Crusader Squads; an Assault Squad; two Terminator Squads; a Dreadnought; a Razorback and two Rhinos. They were led by High Marshall Helbrecht; a Company Captain; a Lieutenant and the Emperor’s Champion. 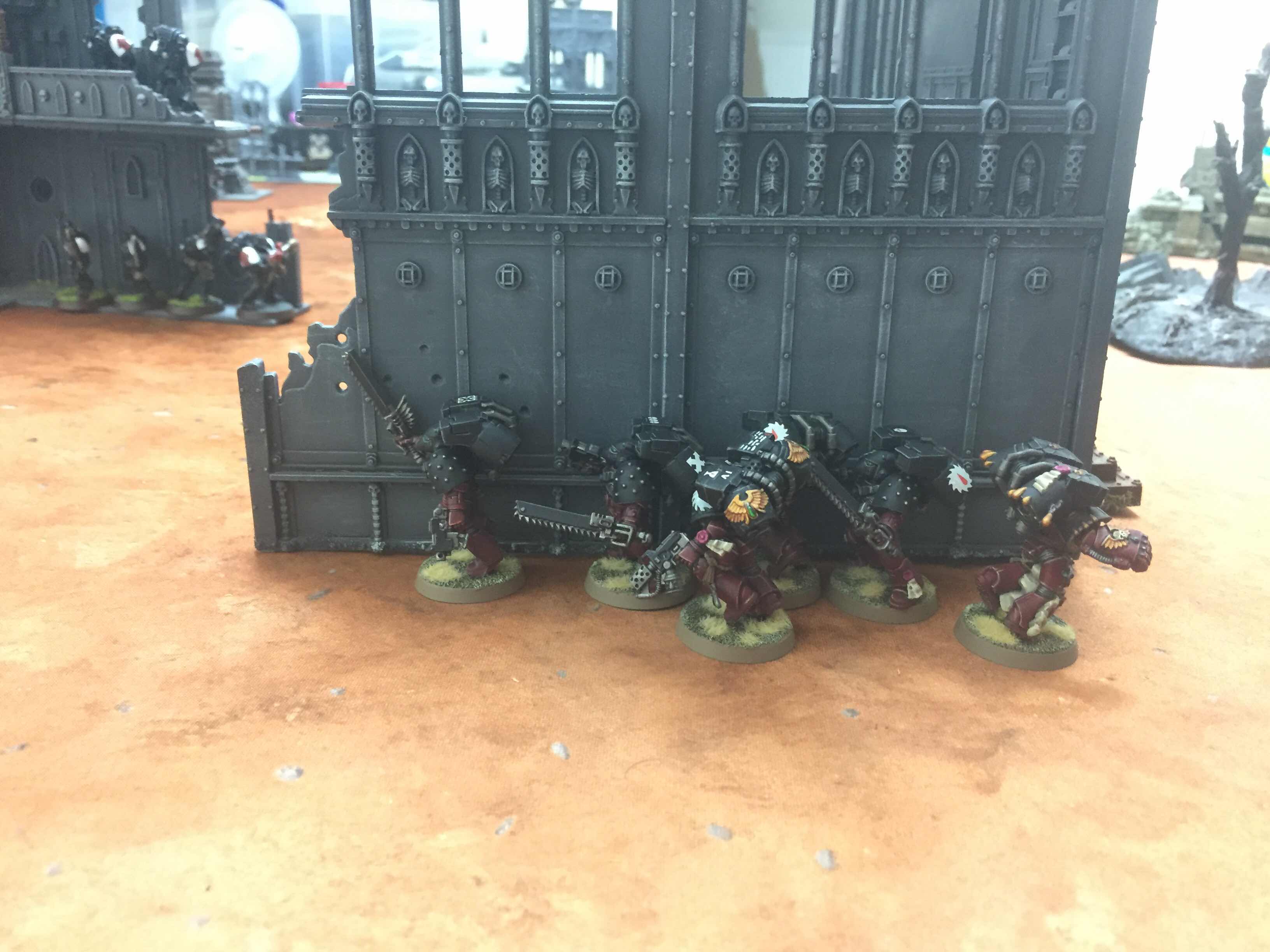 Right from set up I could see that this was going to be an interesting game as both the Flesh Tearers and Black Templars are heavily close combat orientated Space Marine Chapters. Also both chapters had rocked up with their respective Chapter Masters who are absolute beasts in melee. 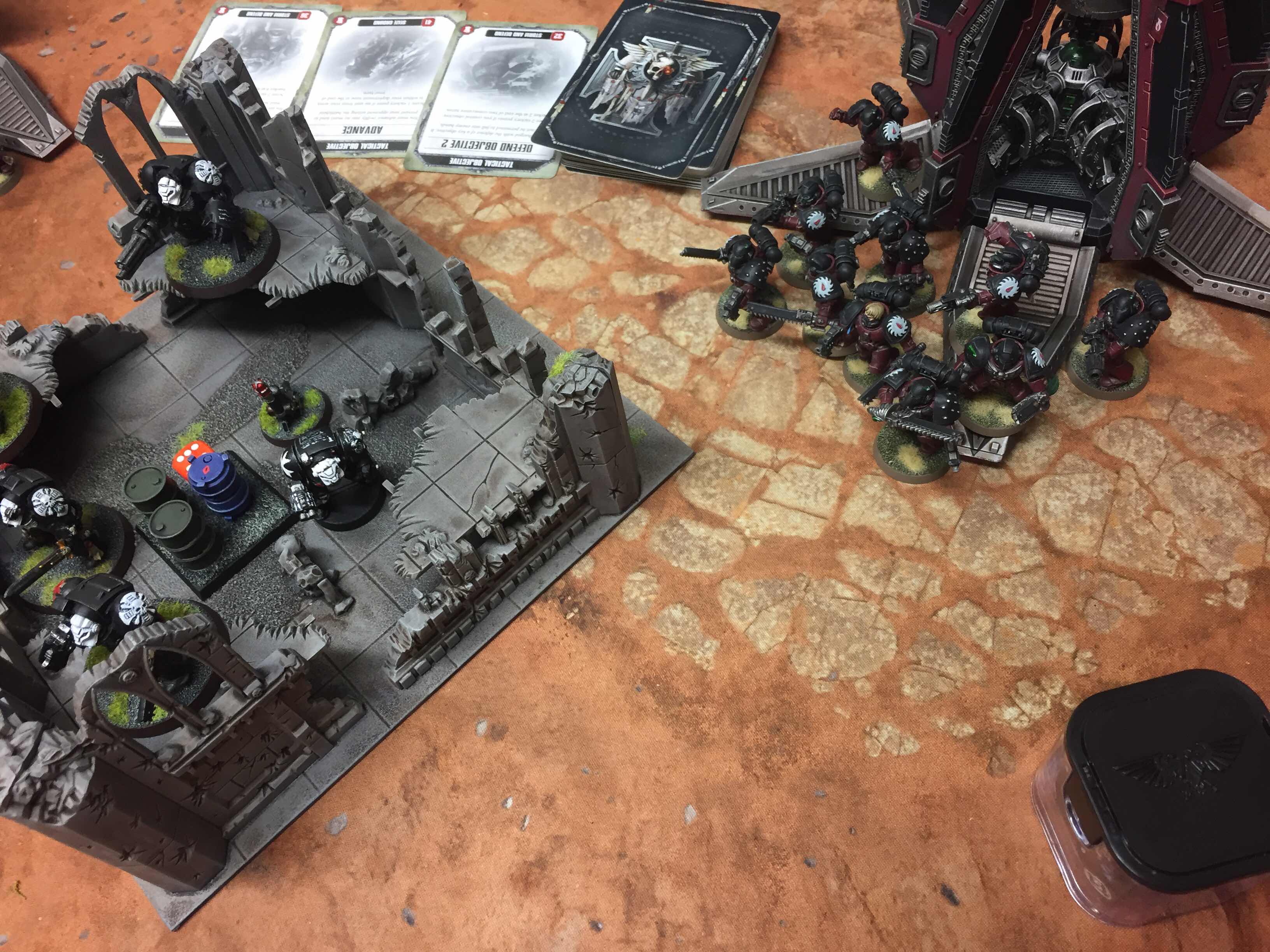 We played one of the games from the rulebook that relies on Tactical Objectives which are generated randomly each turn.

As far as I’m concerned this is one of the best types of play I’ve encountered in 31 years of 40k and is definitely my favourite feature of eighth edition. 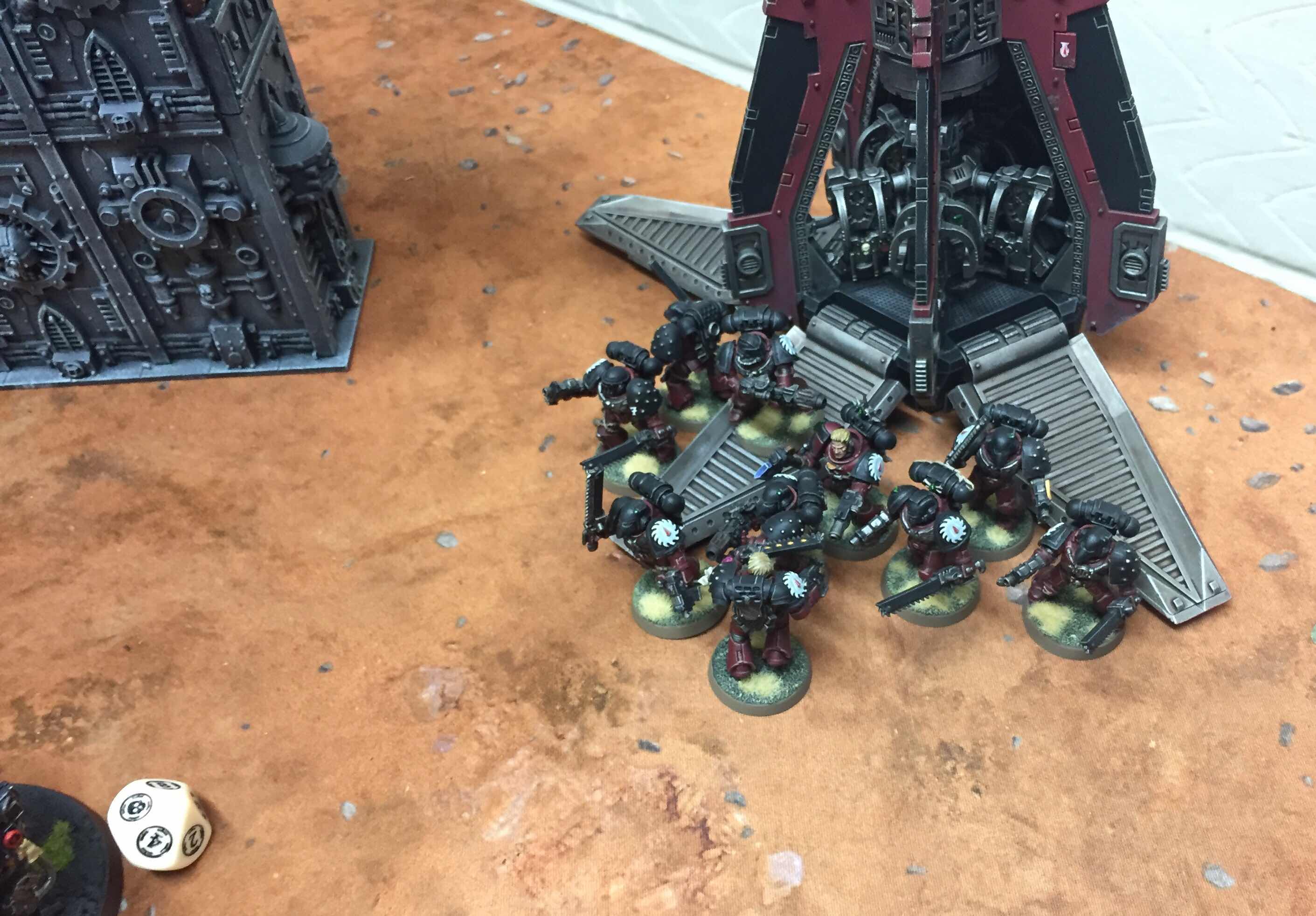 Both of our forces had a lot of deep striking units which are vital in this mode of play as they allow units to turn up in the right place at the right time in order to take control of vital locations or butcher key opponents. 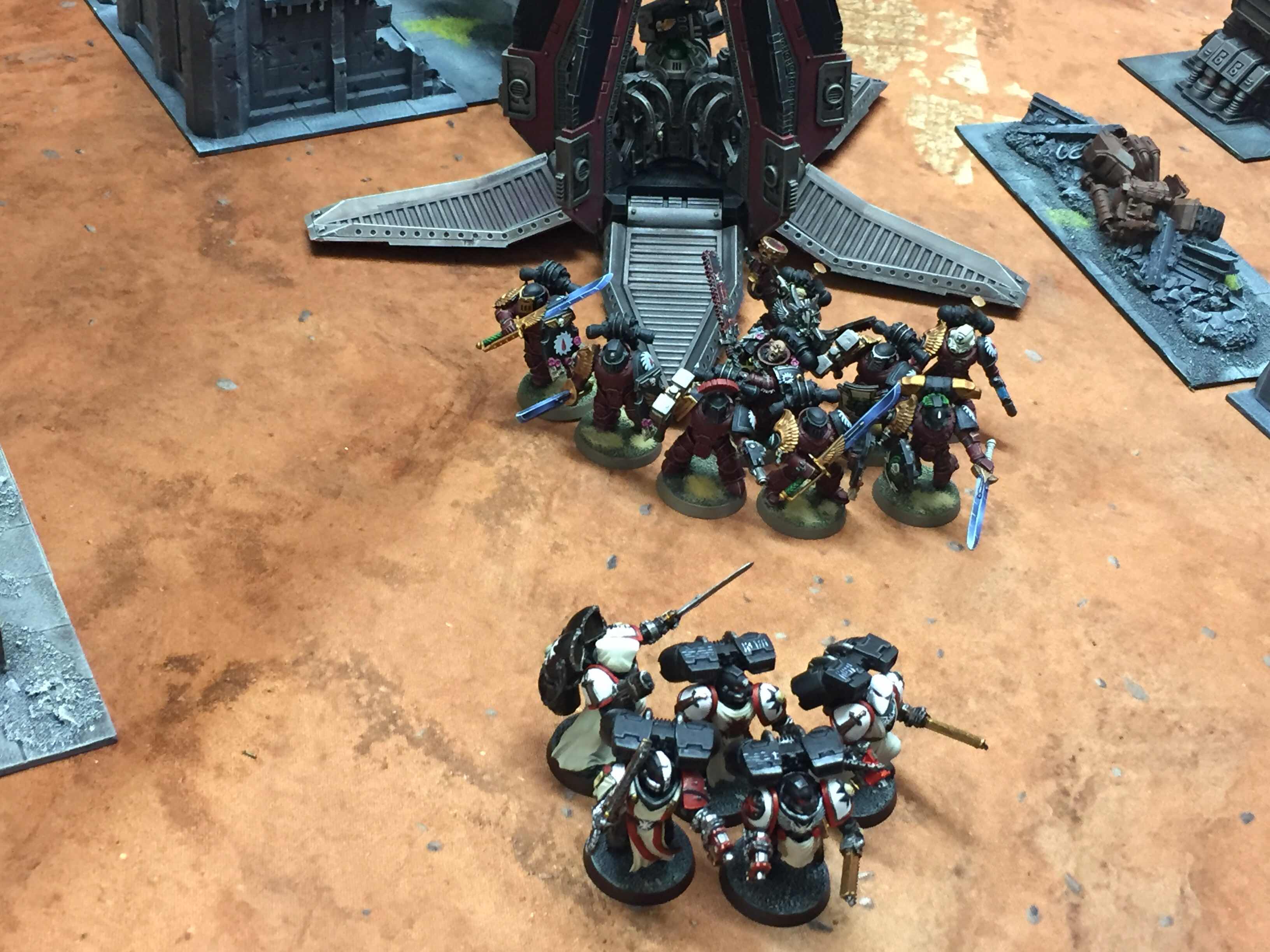 However I’ve learned not to hold back on deploying these units too long because each turn that they are not on the table they are not recouping their points cost. 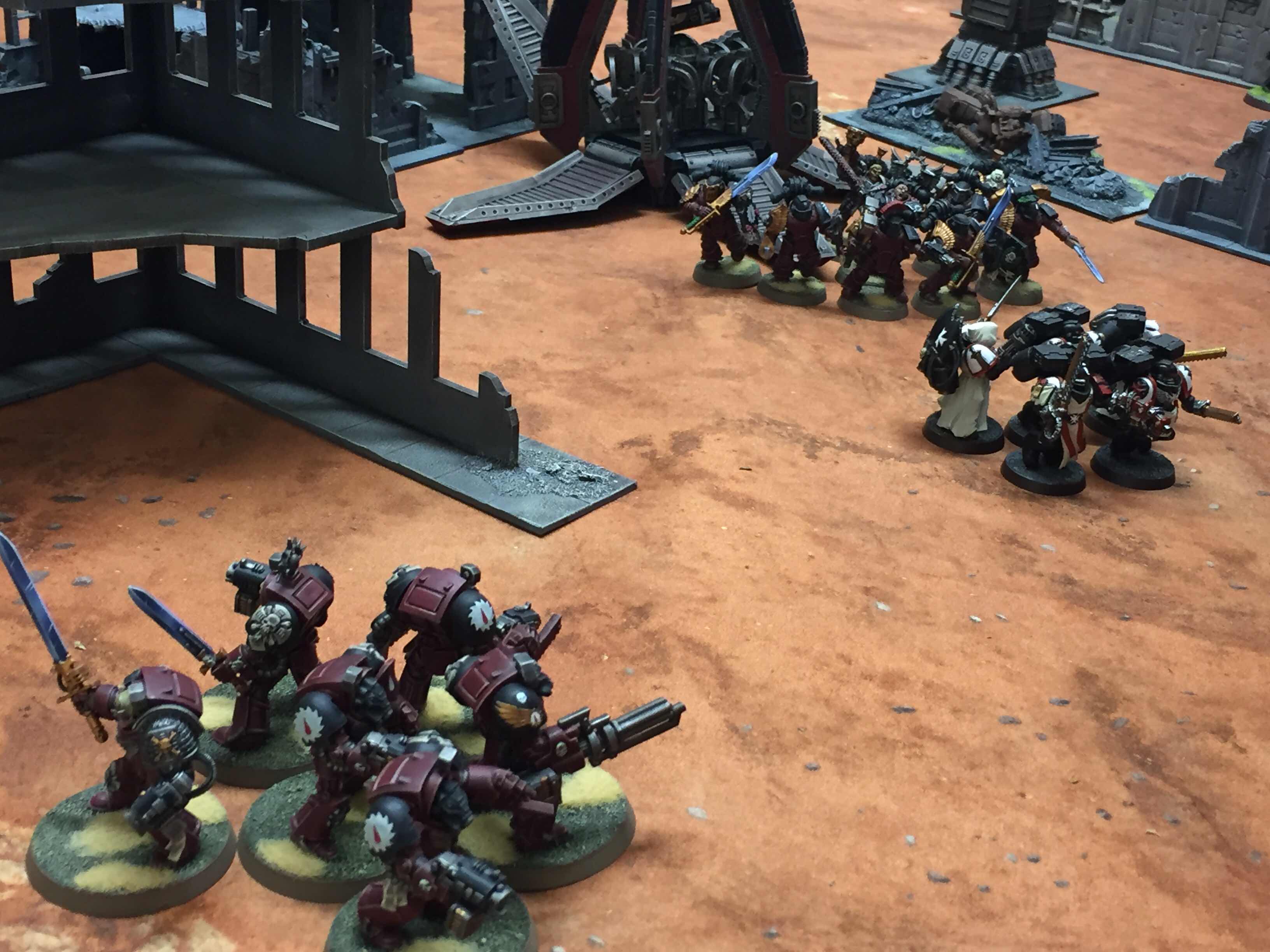 As usual for a game of eighth edition our characters were absolute beasts and dominated the areas of the battlefield that they were located in.

Gabriel Seth proved to be every inch the wrathful beserker that features in the fluff and in one melee phase he wiped out an entire Black Templars Assault Squad by himself... terrifying. To be fair this was in part due to me utilising the synergy of having the correct units nearby to support him and enhance his performance. 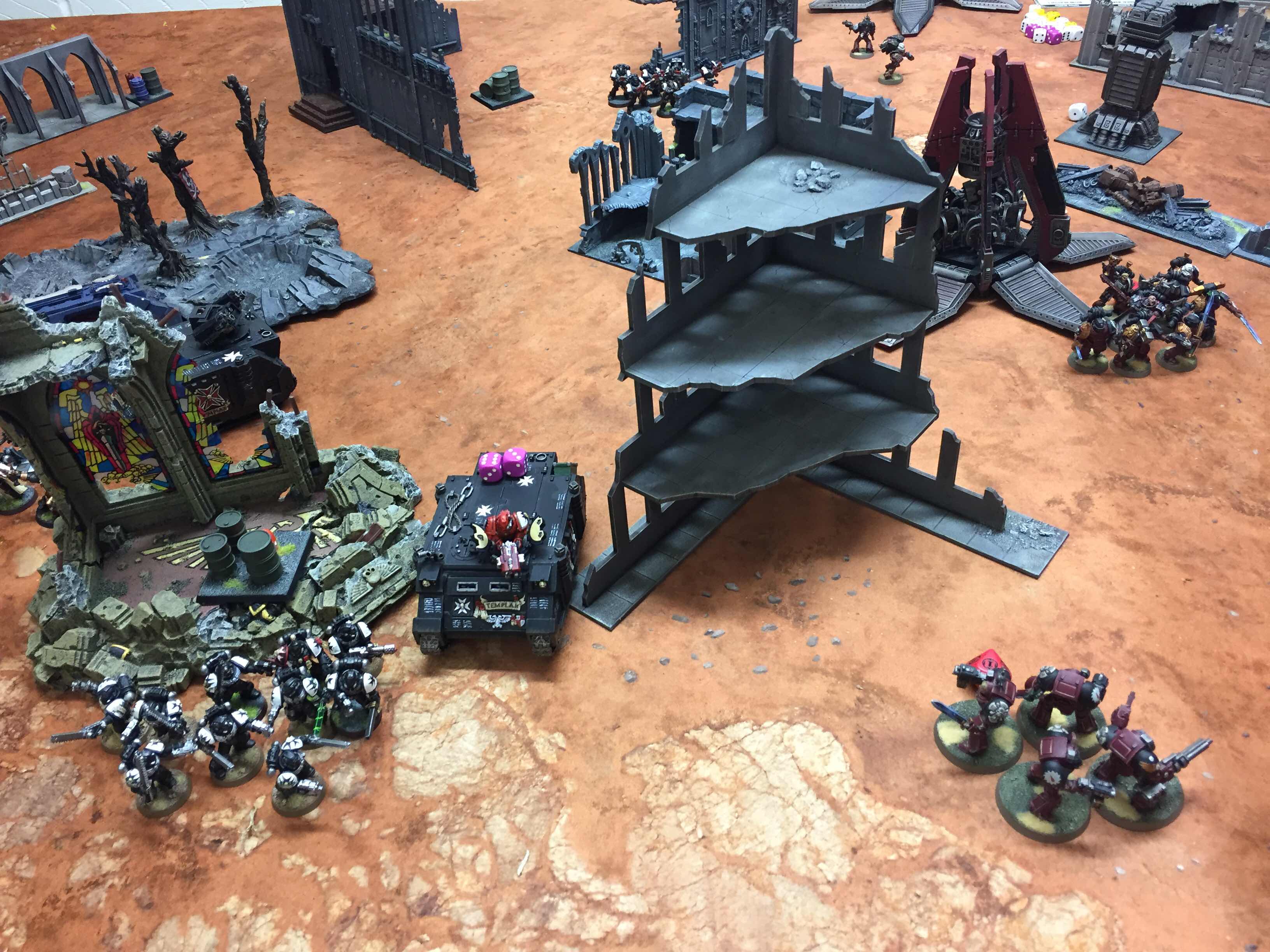 However as the game progresses I found that once a unit had deep striked it quickly lost its value as it would then need to trek by foot across the table in order  to get back into the ebb and flow of battle.

Whereas my opponent’s APC’s were able to continuously redeploy units around the battlefield as and when they were needed which enabled him to seize objectives across the table multiple times. 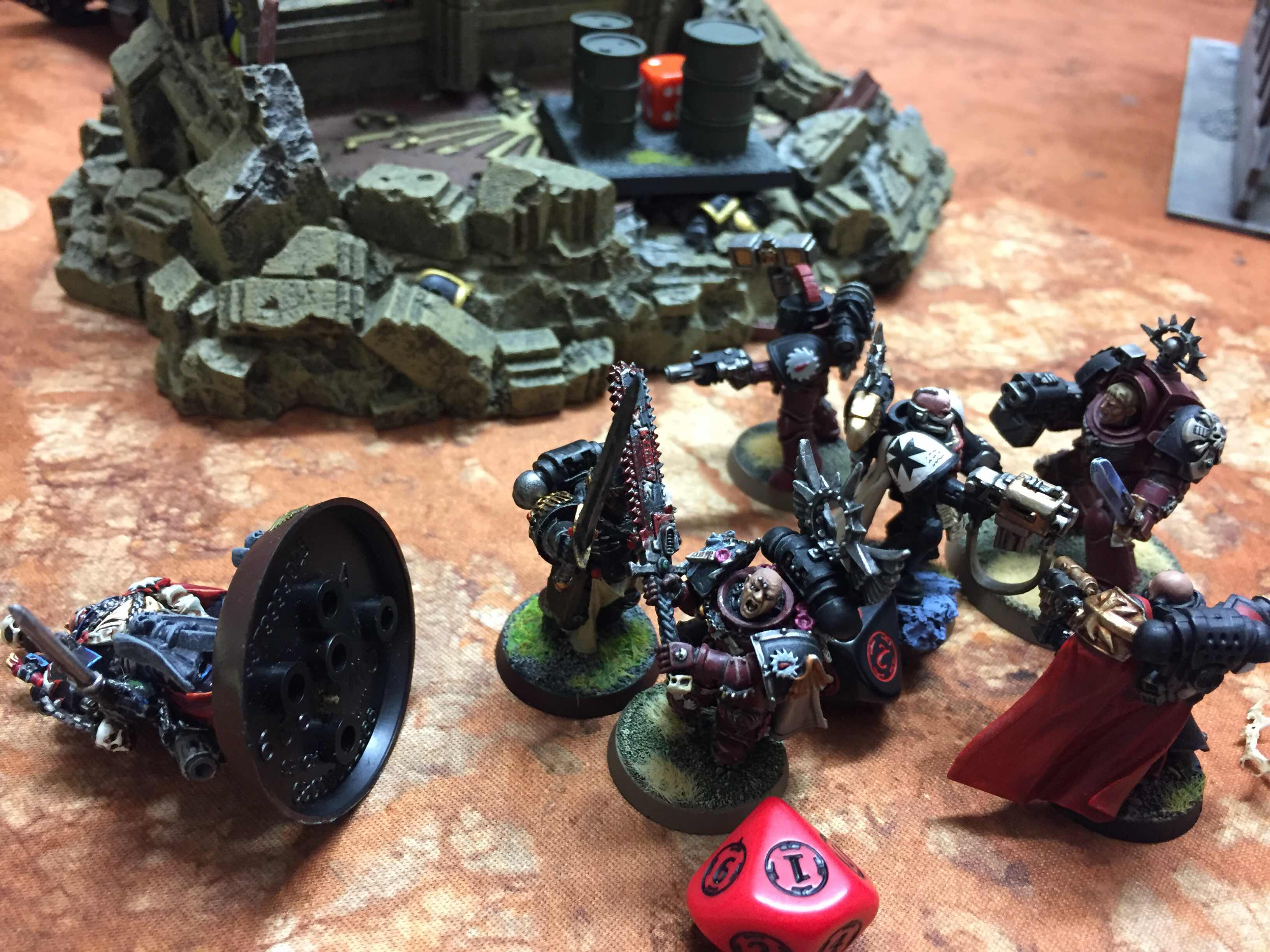 In the end the game came down to an epic punch up between the two command groups and every single character on both sides piled into a massive melee in the ruins of a shattered cathedral. 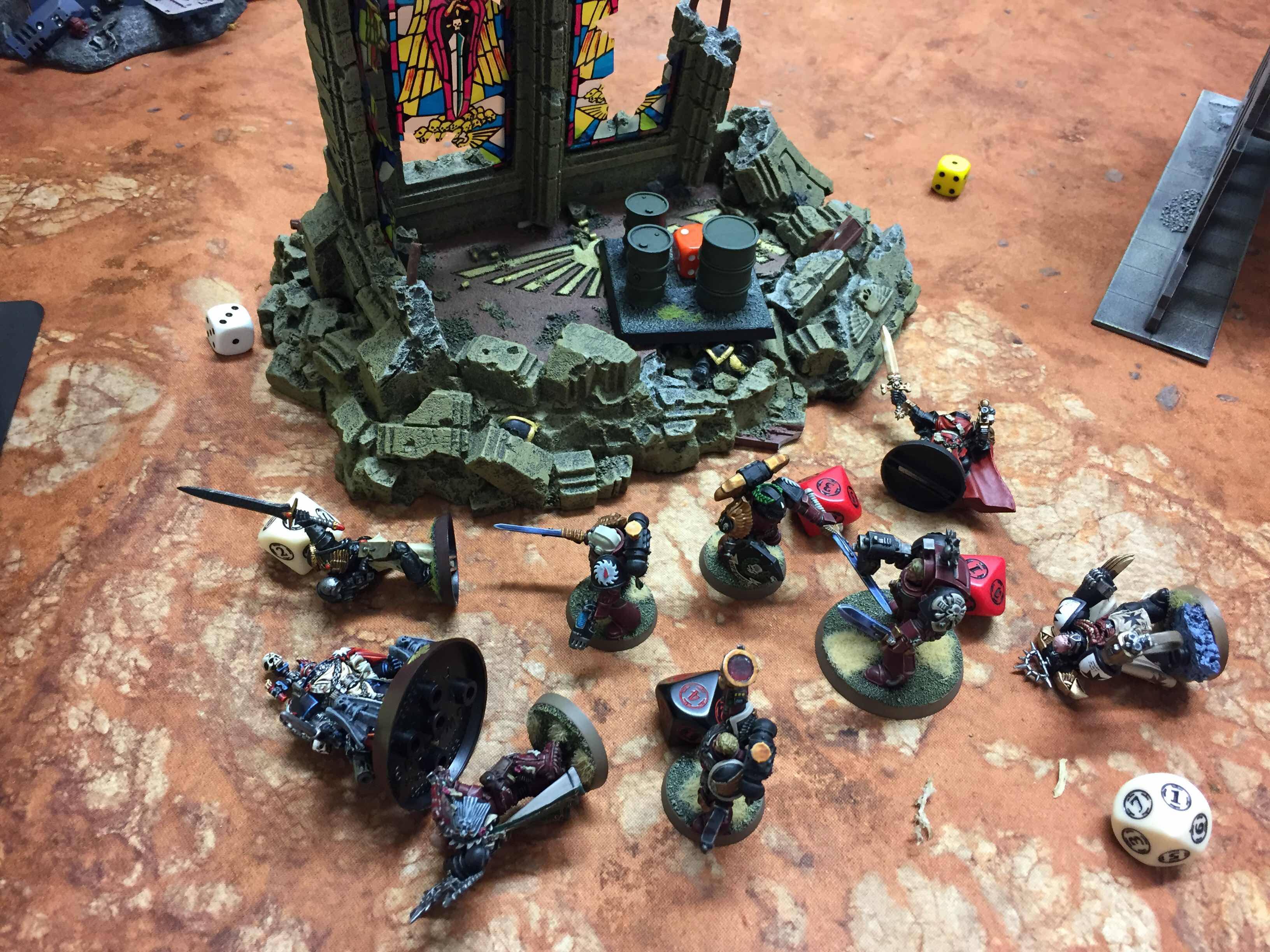 I cheered as Gabriel Seth duked it out with Helbrecht and finally managed to kill the Black Templars High Marshal... emerging from the fight bruised and battered with only one wound remaining.

However my happiness was fleeting and swiftly turned to sadness as the Emperor’s Champion then proceeded to ram the Black Sword through Seth’s chest and kill him outright... even the ministrations of the nearby Sanguinary Priest was unable to bring him back to life. 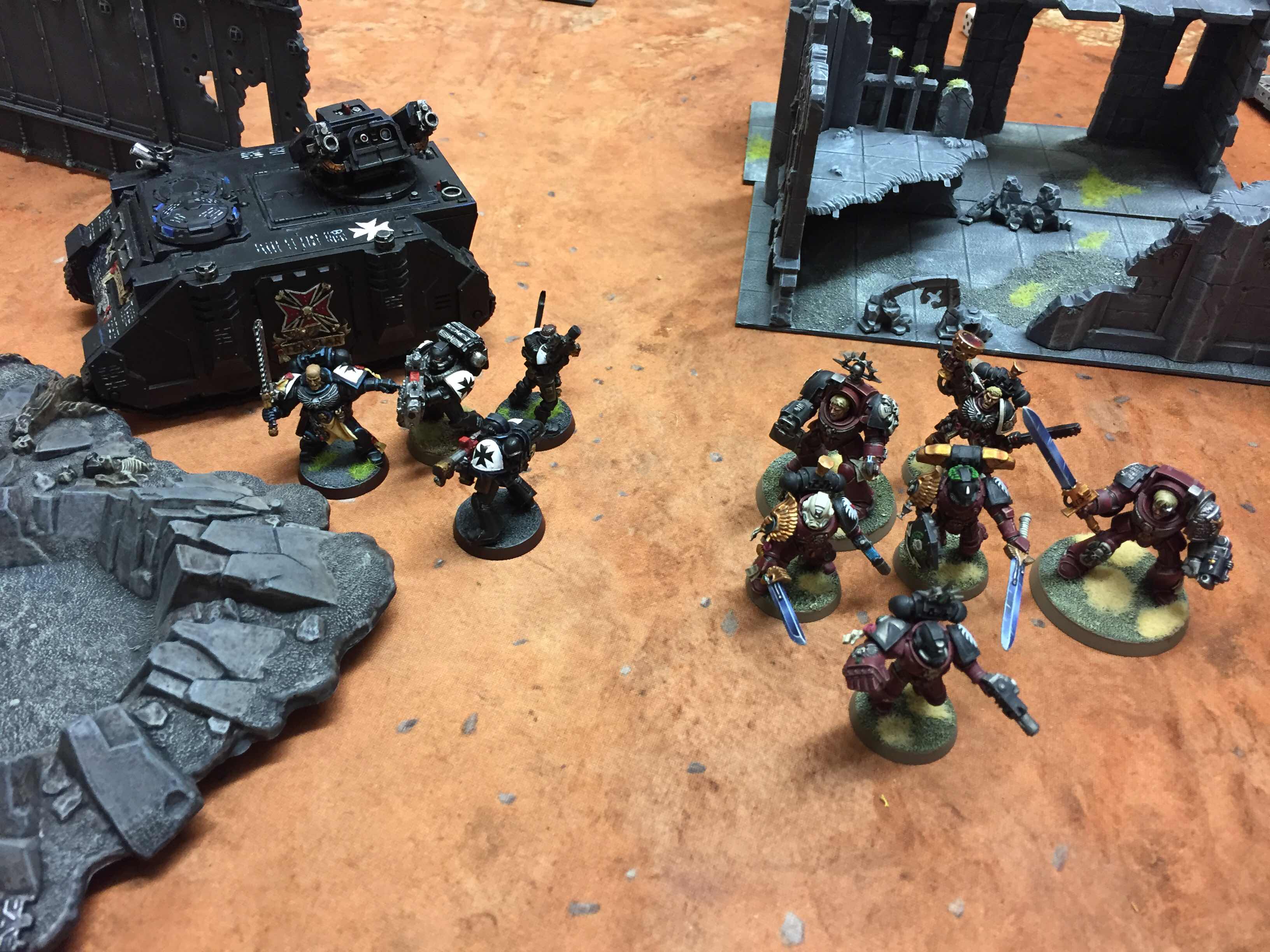 That marked the end of the game... and at the conclusion of the battle there were only eleven models left on the table in total.

As per usual eighth edition proved to be horrendously brutal with a vast amount of casualties on both sides!

All that was left was to tally up the victory points:

So my opponent had managed to achieve a well deserved victory.

He had played a great game and was definitely entitled to come out as the victor. That being said the result was very close and there were many things that took place on the final turn that could have caused the outcome to go either way...

And that is another great feature of eighth edition... in almost every game I have played so far the final results have been close and there is always a chance of snatching victory right up until the last dice roll.

Overall that was an absolutely great game and we both took a drive to our local Games Workshop the next day in order to purchase some fresh modelling supplies (and extra troops!) ...so hopefully we’ll be having another battle again soon!

Posted by LegioCustodes at 14:51