I thankfully managed to get another game of 8th Edition 40k in recently with one of my regular opponents.

I am happy to say that we have been getting some fairly frequent games in of late and are still greatly enjoying the latest edition of the rules. 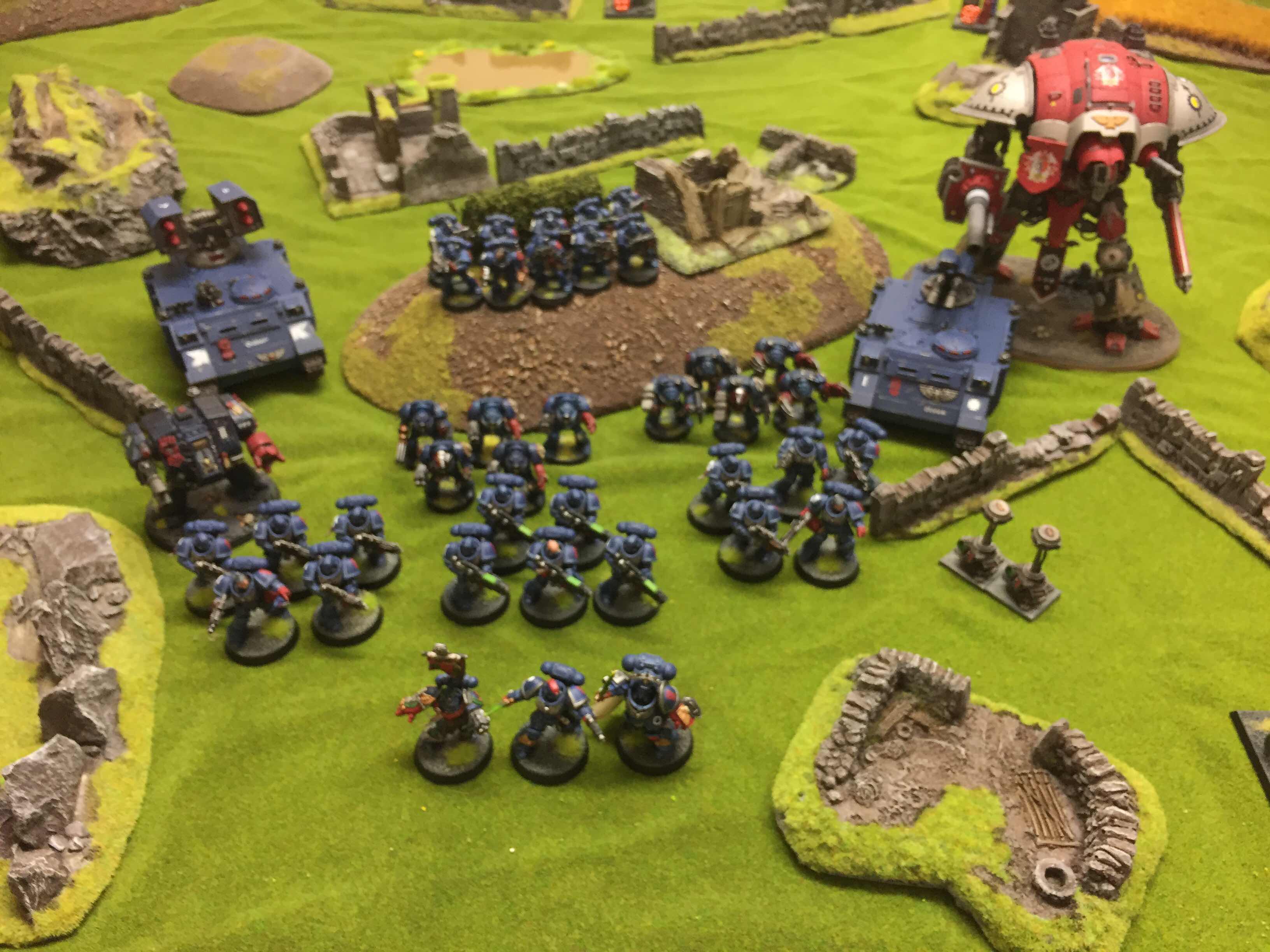 This time around my force consisted of my usual Crimson Fists Space Marines backed up by the towering form of an Imperial Knight. The Marines consisted of Chapter Master Pedro Kantor, a Primaris Captain and a Primaris Lieutenant for the HQ element. They were supported by two squads of Intercessors; one squad of Hellblasters; a Tactical Squad: two Terminator squads and a Dreadnought with a Razorback operating as battlefield taxi. Finally a Whirlwind provided the force some artillery support. 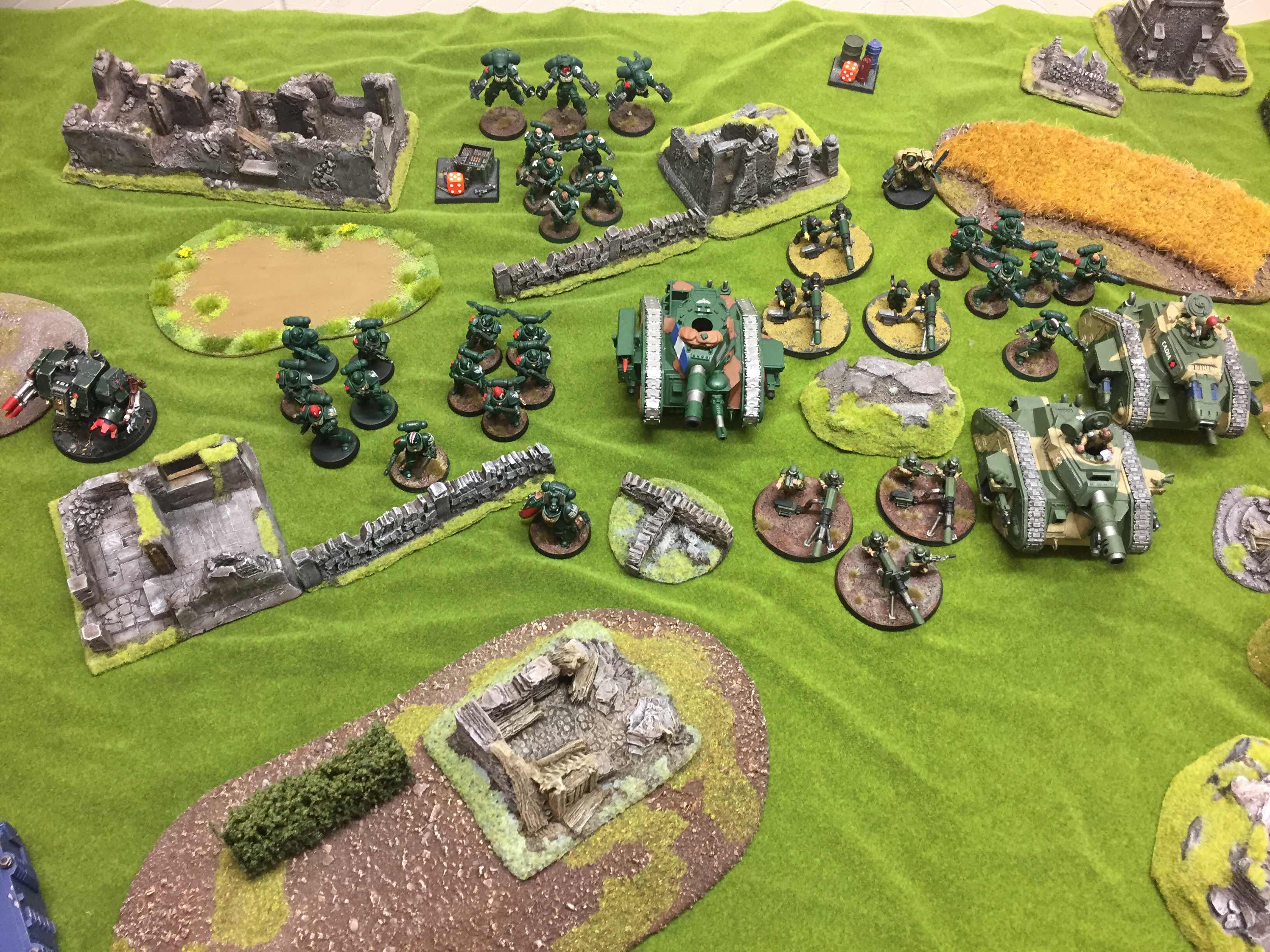 My opponent fielded a Dark Angels Force consisting of a Primaris Captain; a Primaris Lieutenant, two squads of Reivers, some Inceptors, Intercessors and a Dreadnought. These were reinforced by the might of the Imperial Guard in the form of some Heavy Weapon teams and a shitload of Leman Russ variants. 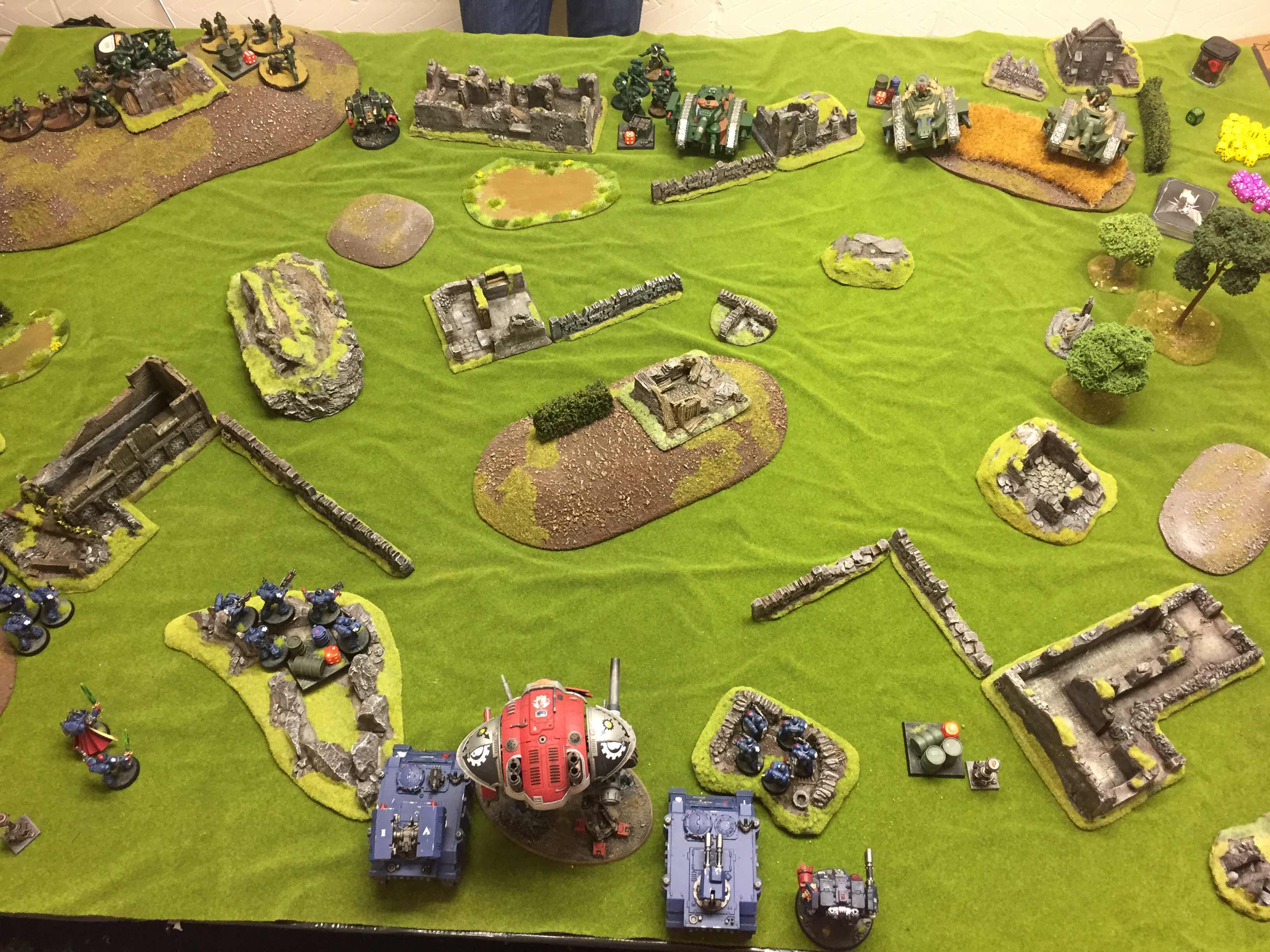 I was feeling quite retro when I set up the game and so I dusted down my old 1990s green felt battle mat and some old school resin terrain that I had recently renovated. I was really pleased with the Oldhammer aesthetic that this collection of scenery created. 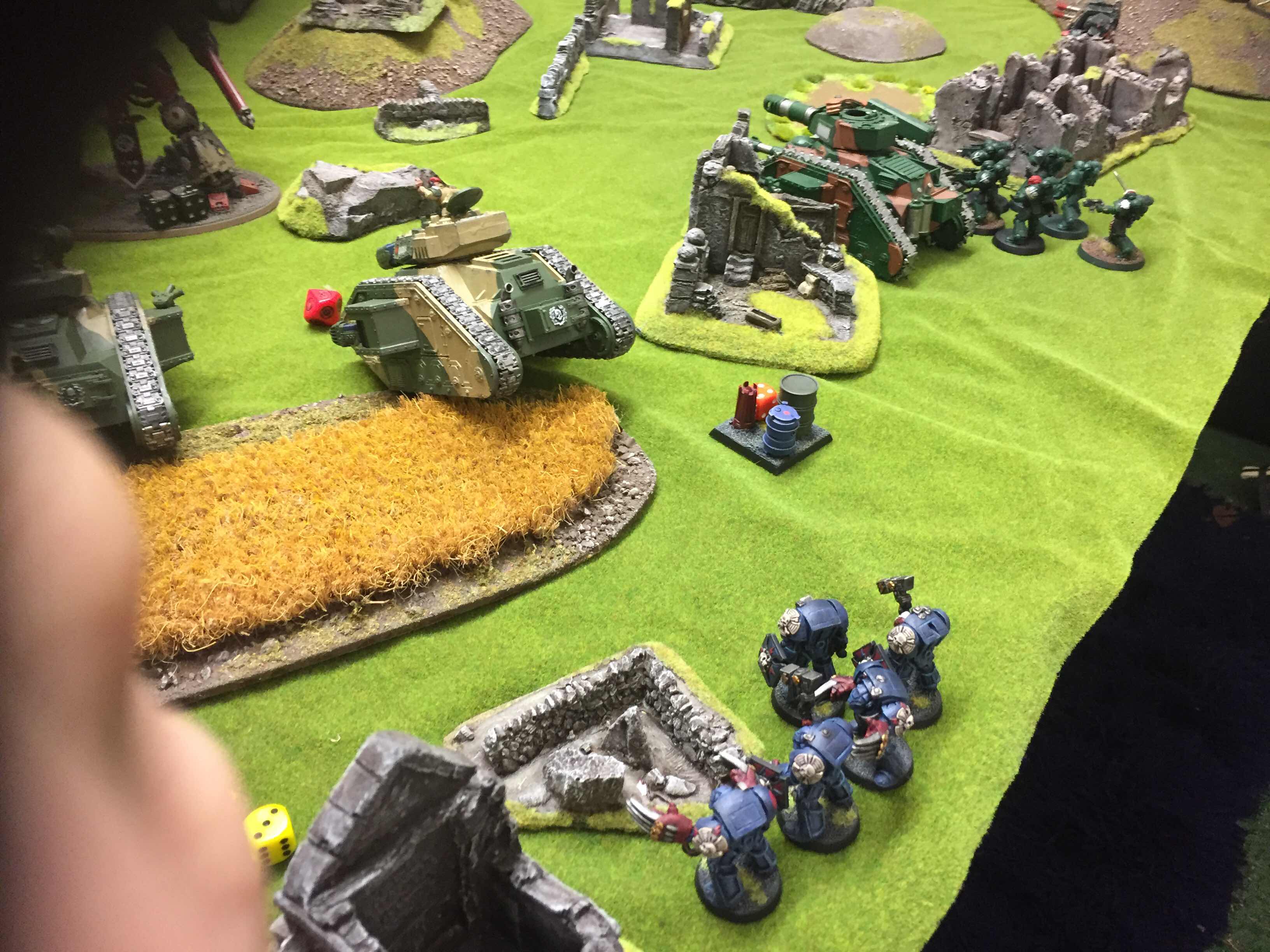 Once again we played the game using the Tactical Objectives Format where both player’s mission goals change each turn. 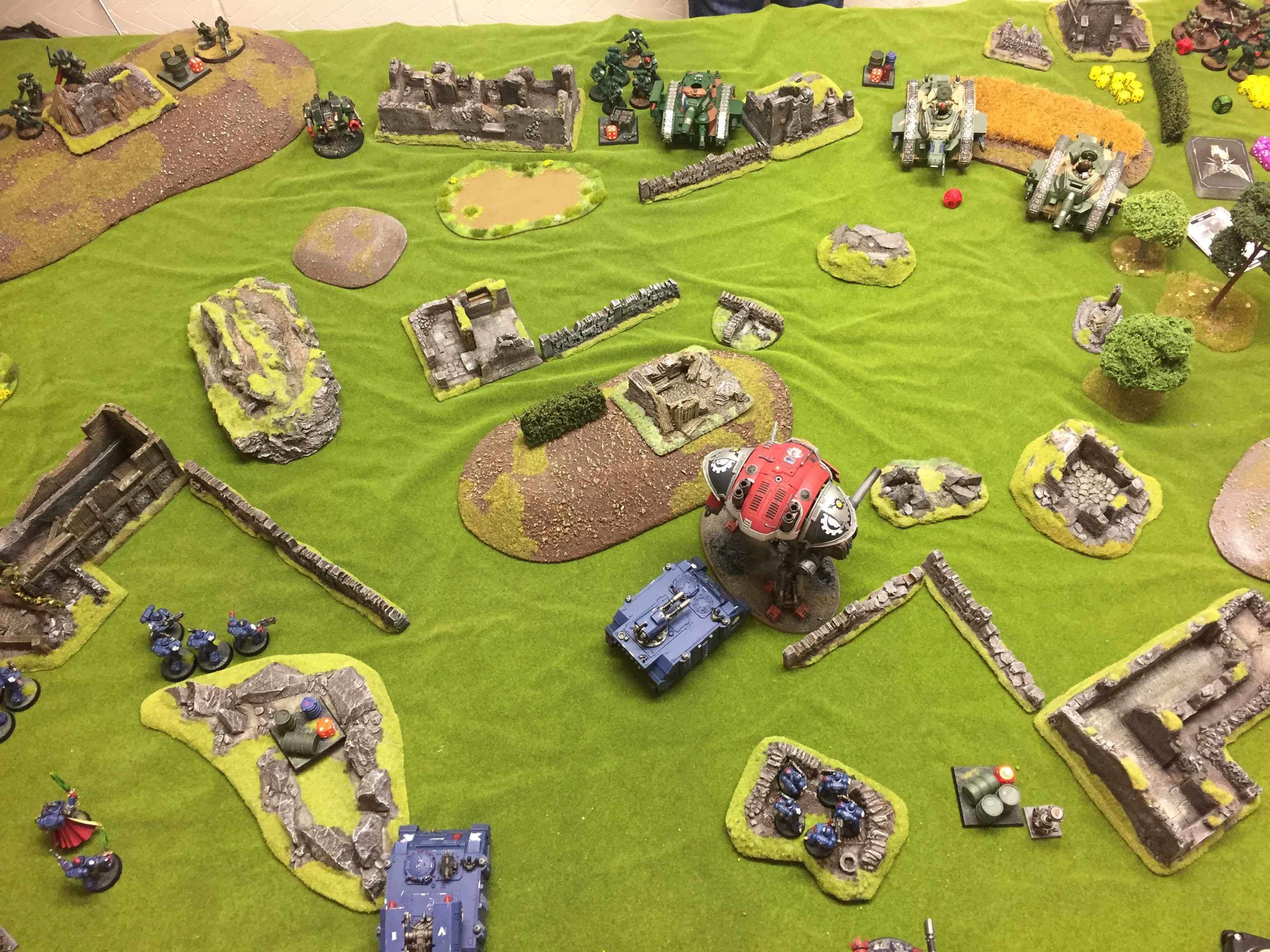 This is a really fun way to play the game and ensures that there is both a degree of challenge and ‘fog of war’ throughout the battle. 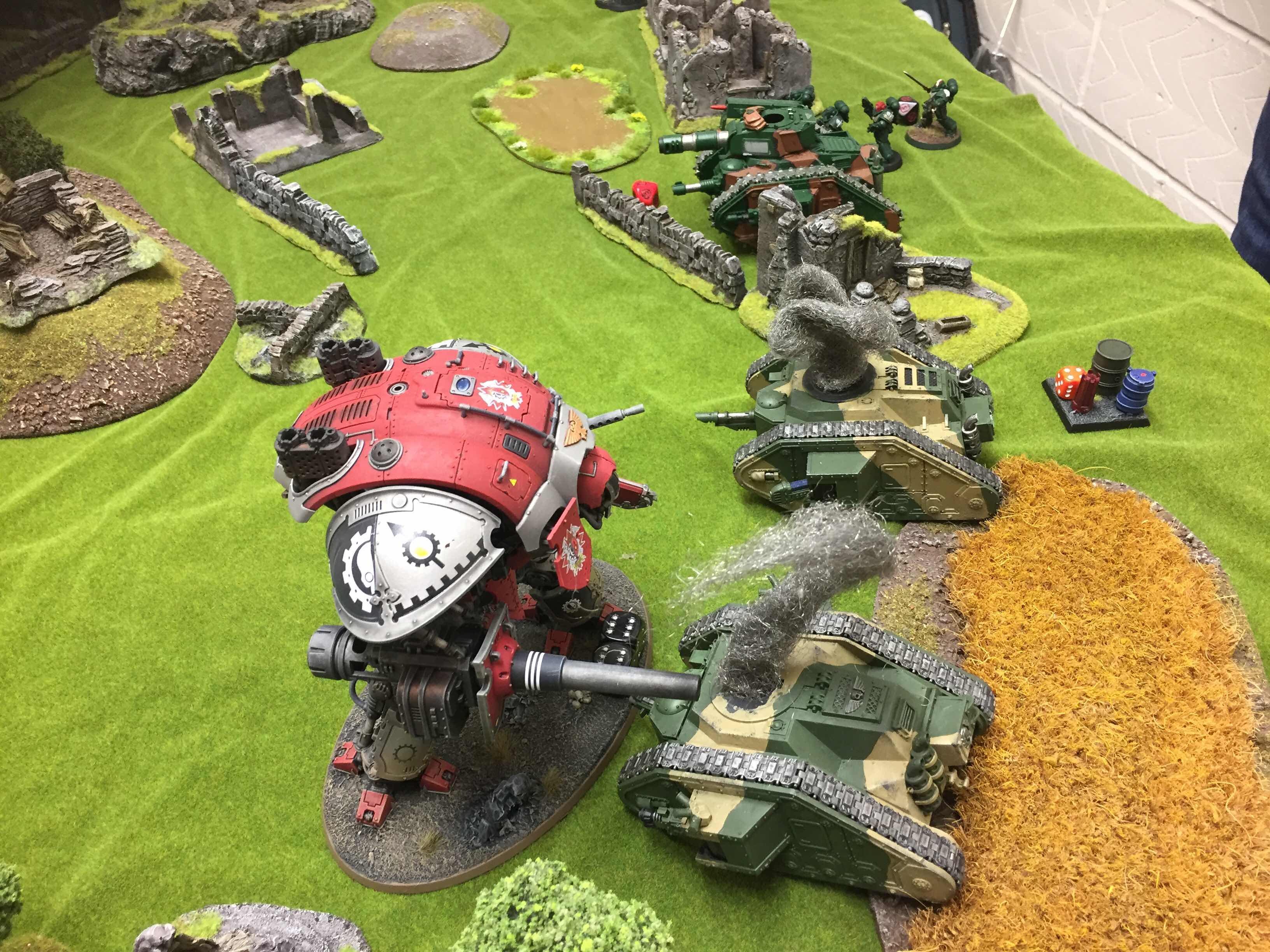 It quickly became obvious early on in the game that our big guns were dominating the battlefield and so both of us quickly targeted the others heavy hitting units for extermination.

Luckily my Imperial Knight proved to be exceptionally durable and quickly traversed the battlefield and annihilated two of the Russ variants in short order. However their combined firepower weakened it enough for it to be brought down by nearby Imperial Guard heavy weapons squads. 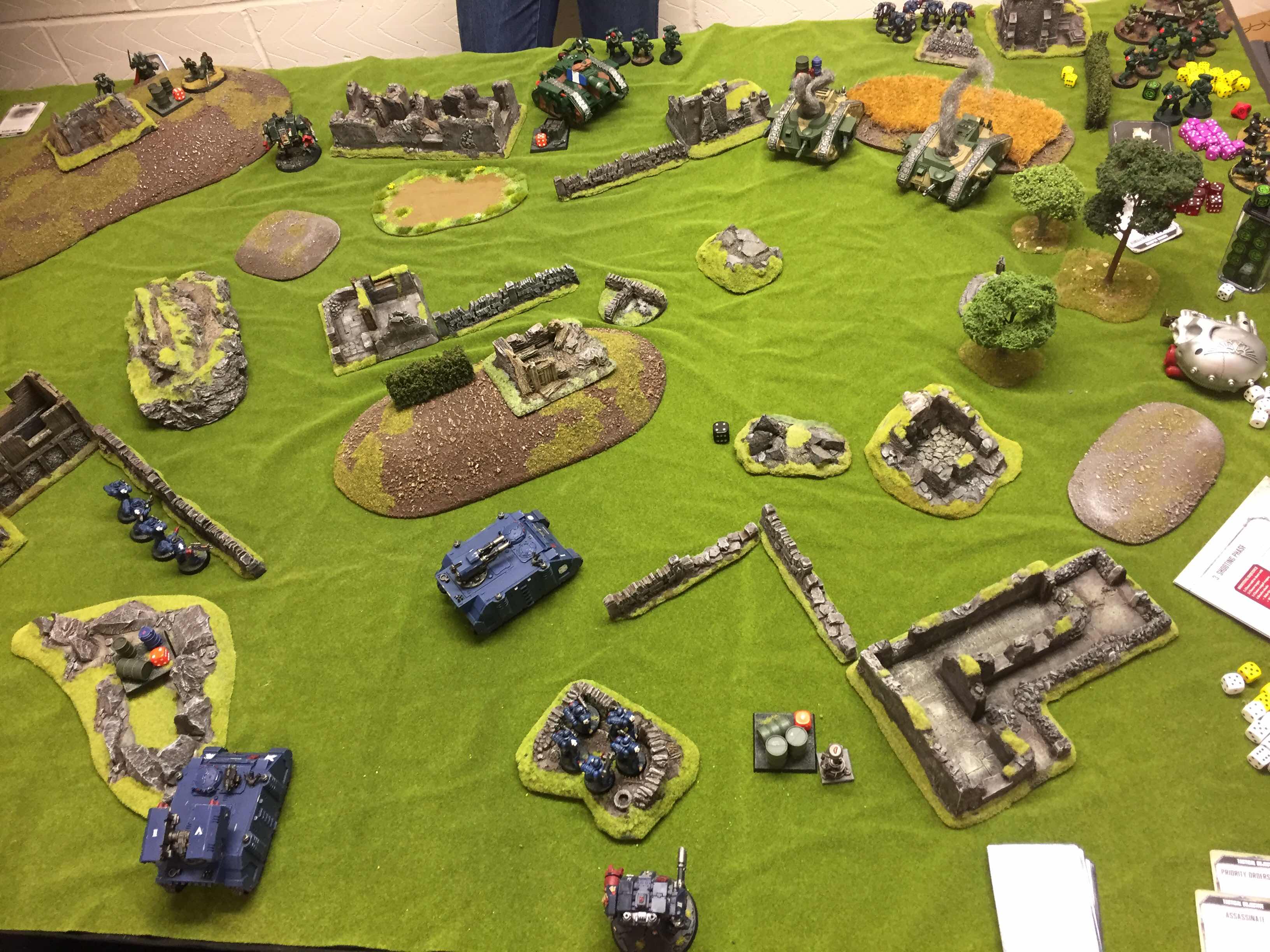 Meanwhile my Intercessors and Tactical Marines held the left flank and provided close support for the vulnerable Whirlwind. In the centre of the table the Razorback was loaded up with HQ units and pushed forward to deliver them to the enemy lines. 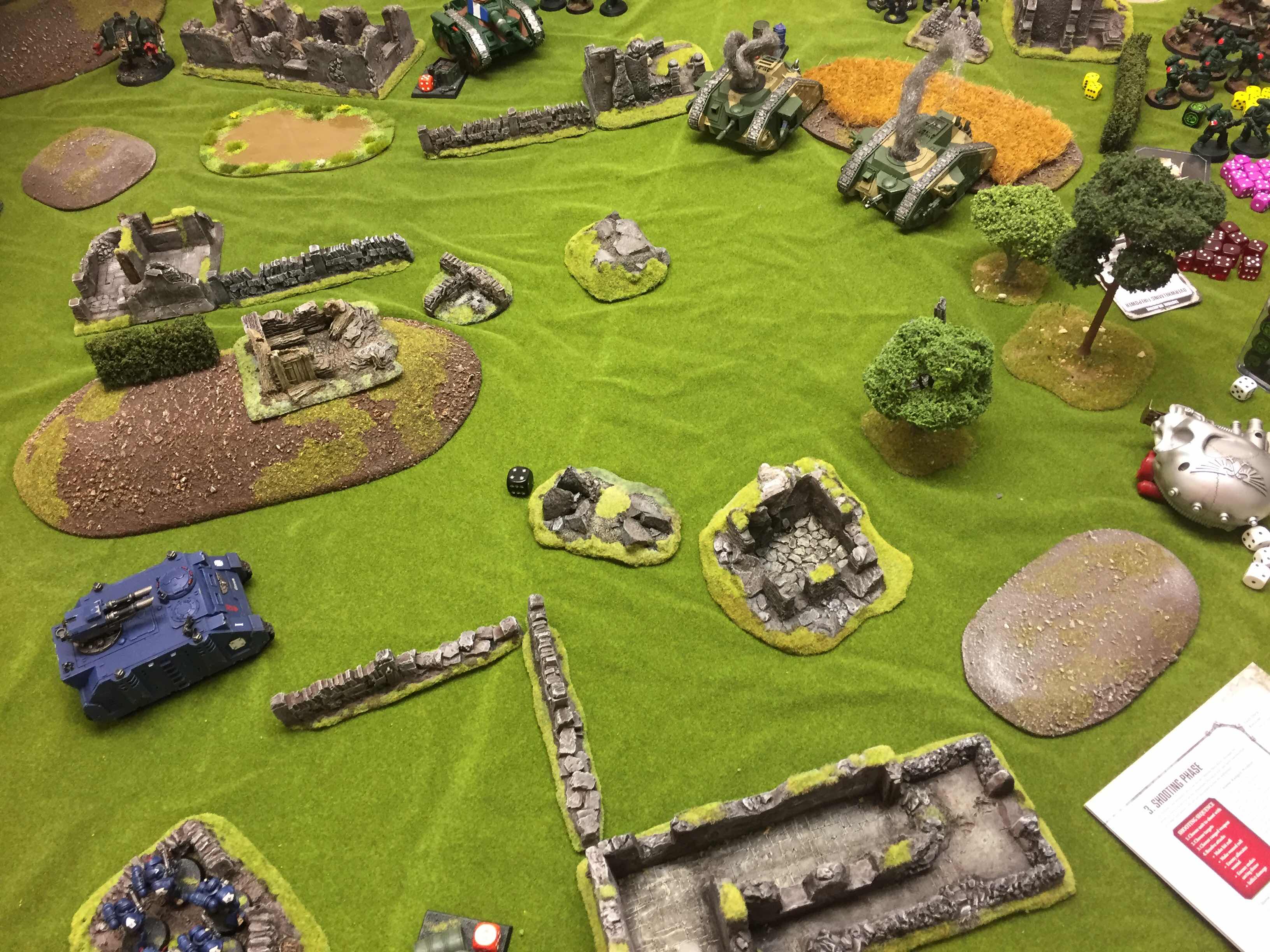 Of course this obvious punch in the centre was merely a distraction designed to split my opponent’s forces and in fact the real deal breakers arrived in the form of... 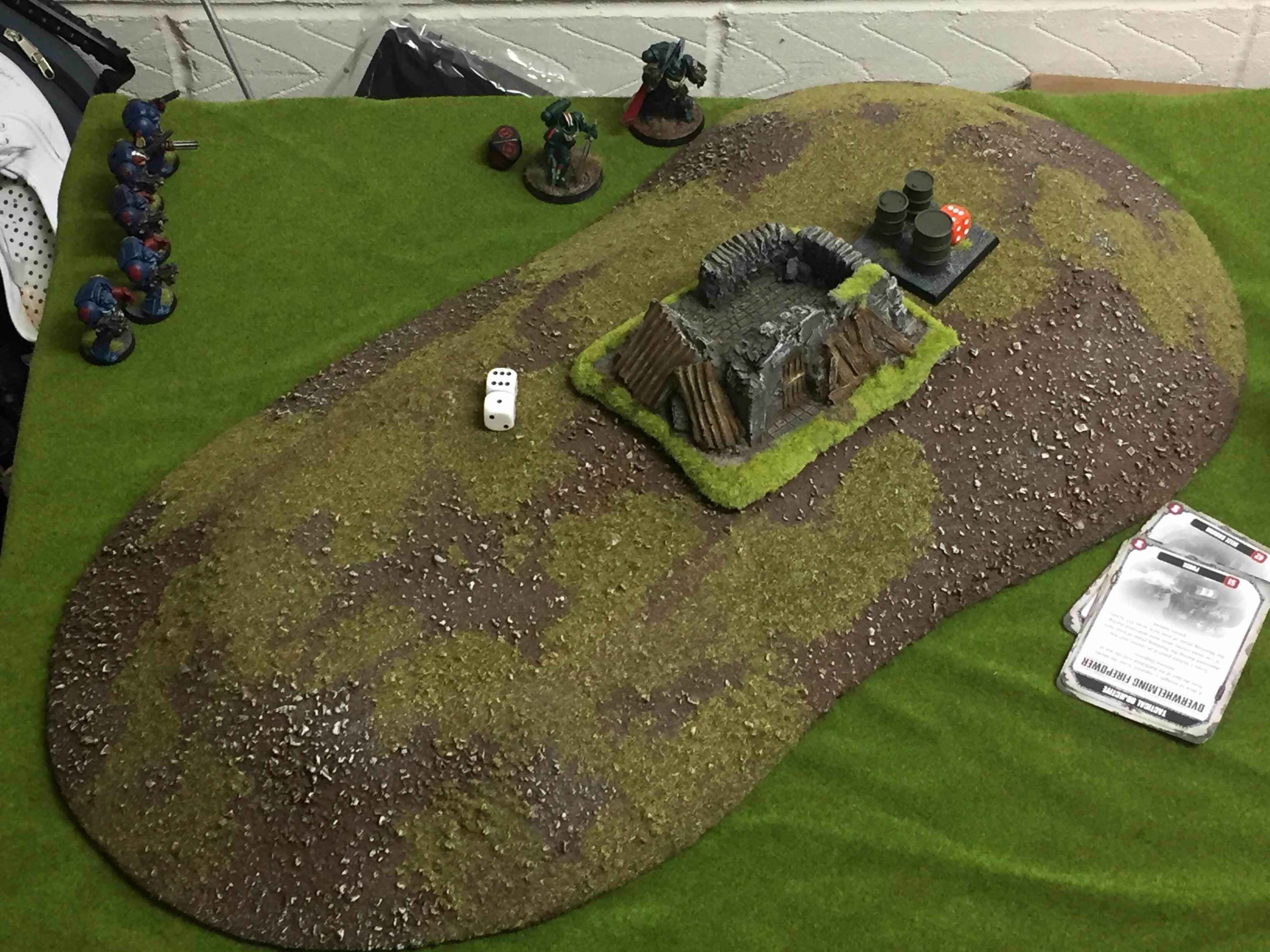 ... A teleporting Terminator Squad with specific orders to assassinate his Warlord and ... 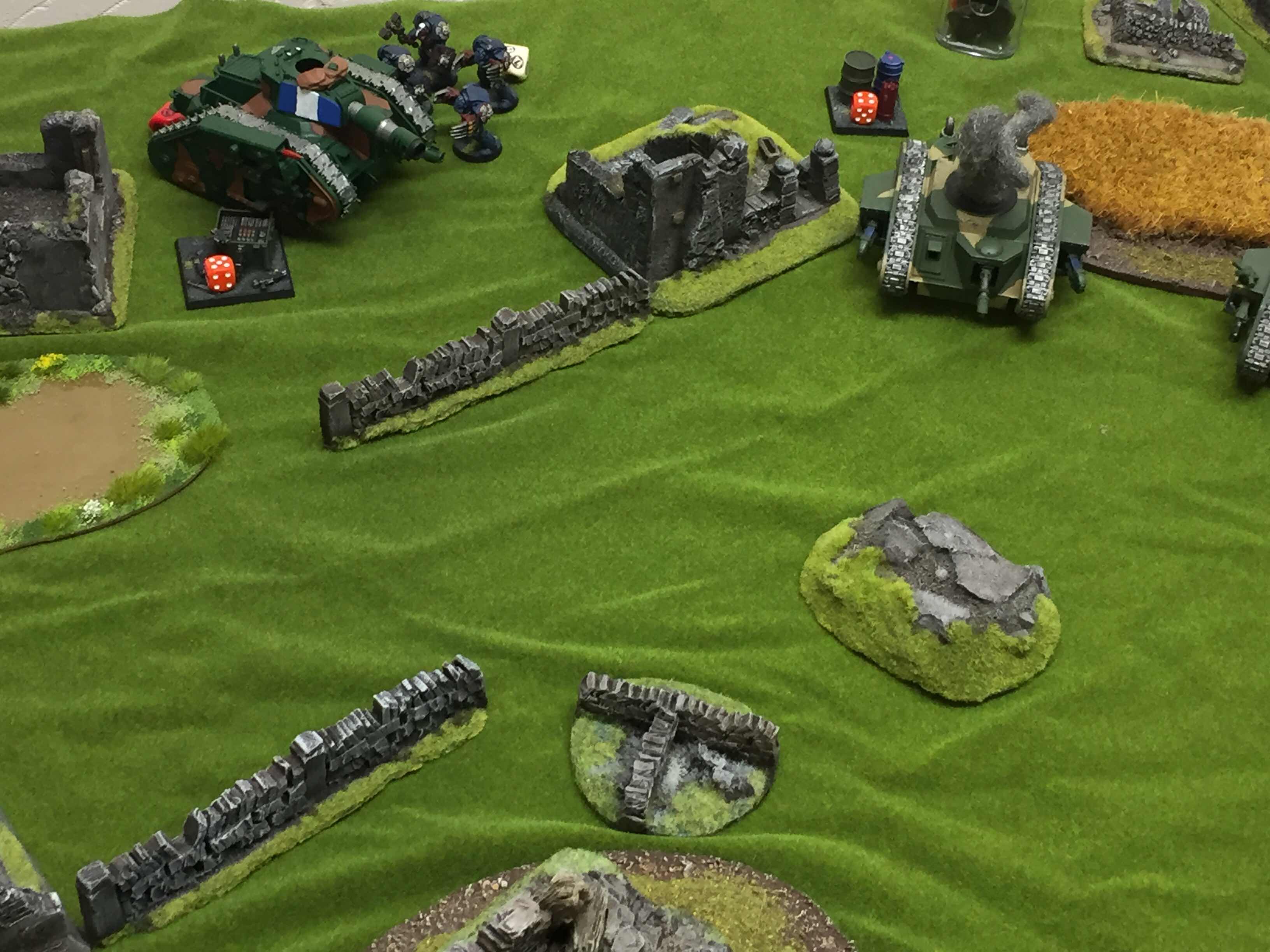 ... another squad of Terminators teleporting in to take down his remaining armoured assets. 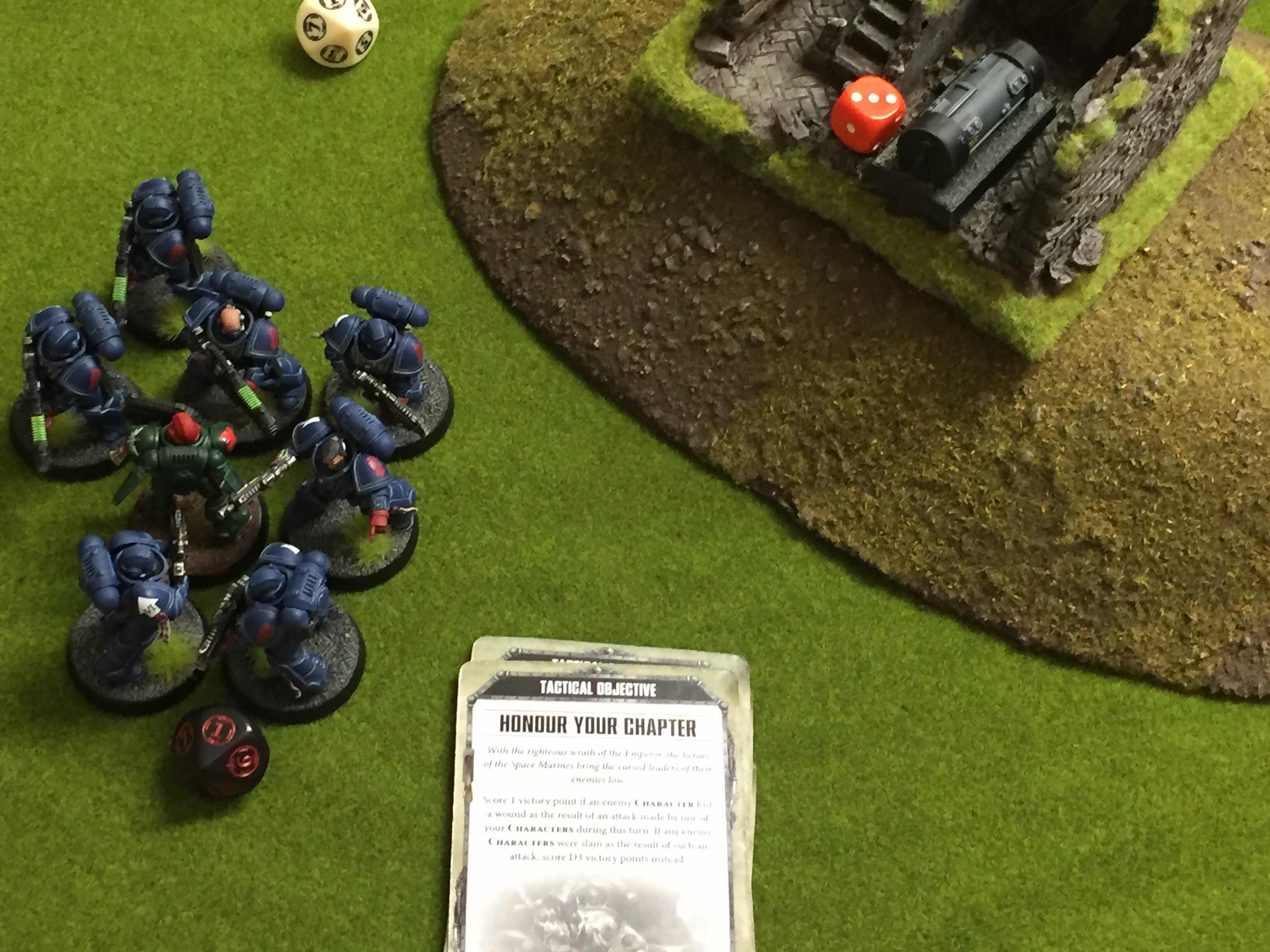 With the Dark Angels successfully divided and their Imperial Guard allies having been slaughtered to a man this provided me the opportunity to use my remaining forces to isolate and slay the last pockets of resistance. 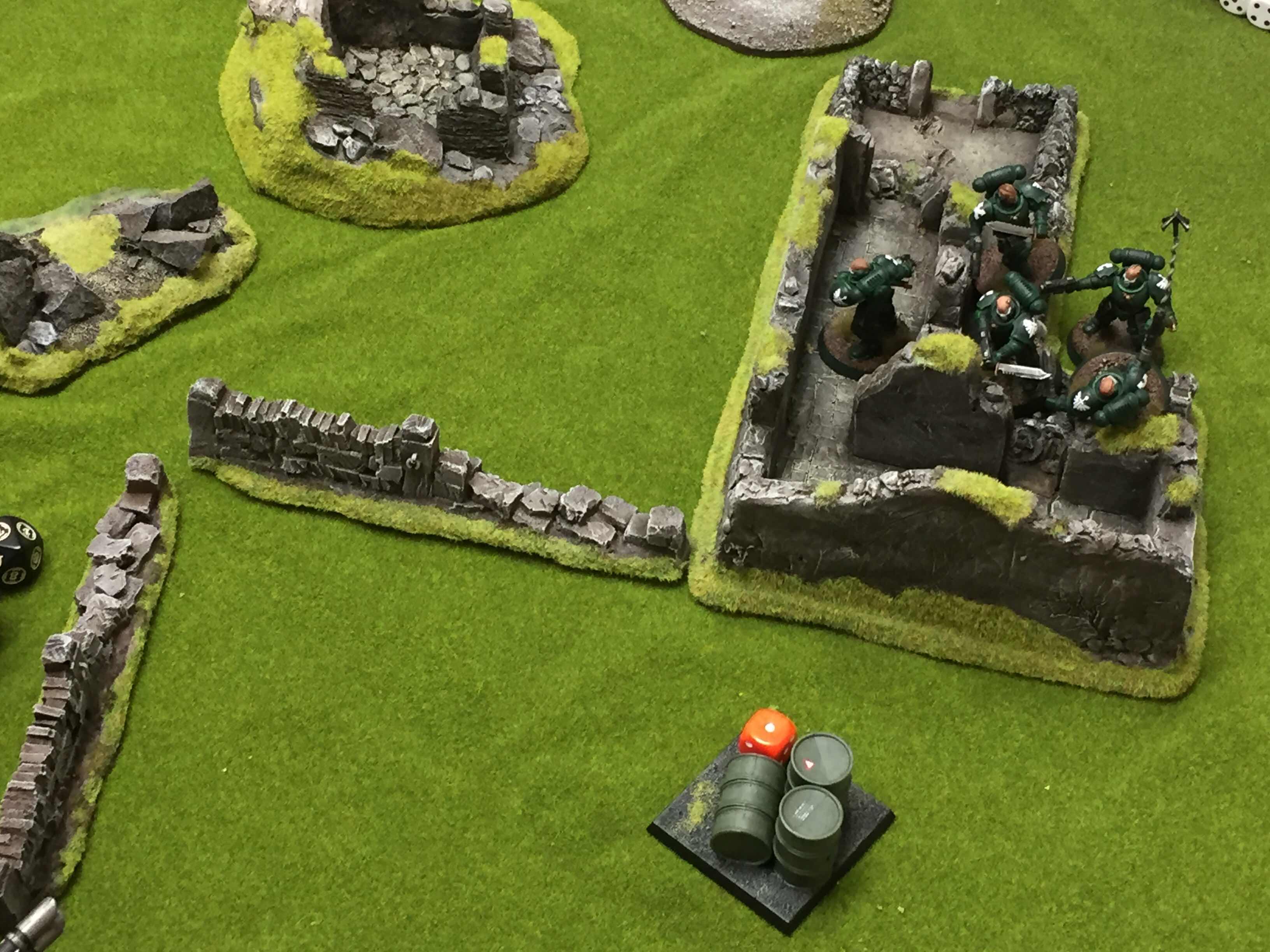 Some of the Dark Angels (namely this cowardly squad of Reivers) chose not to commit themselves to the fight and instead sat by and watched their comrades get butchered. 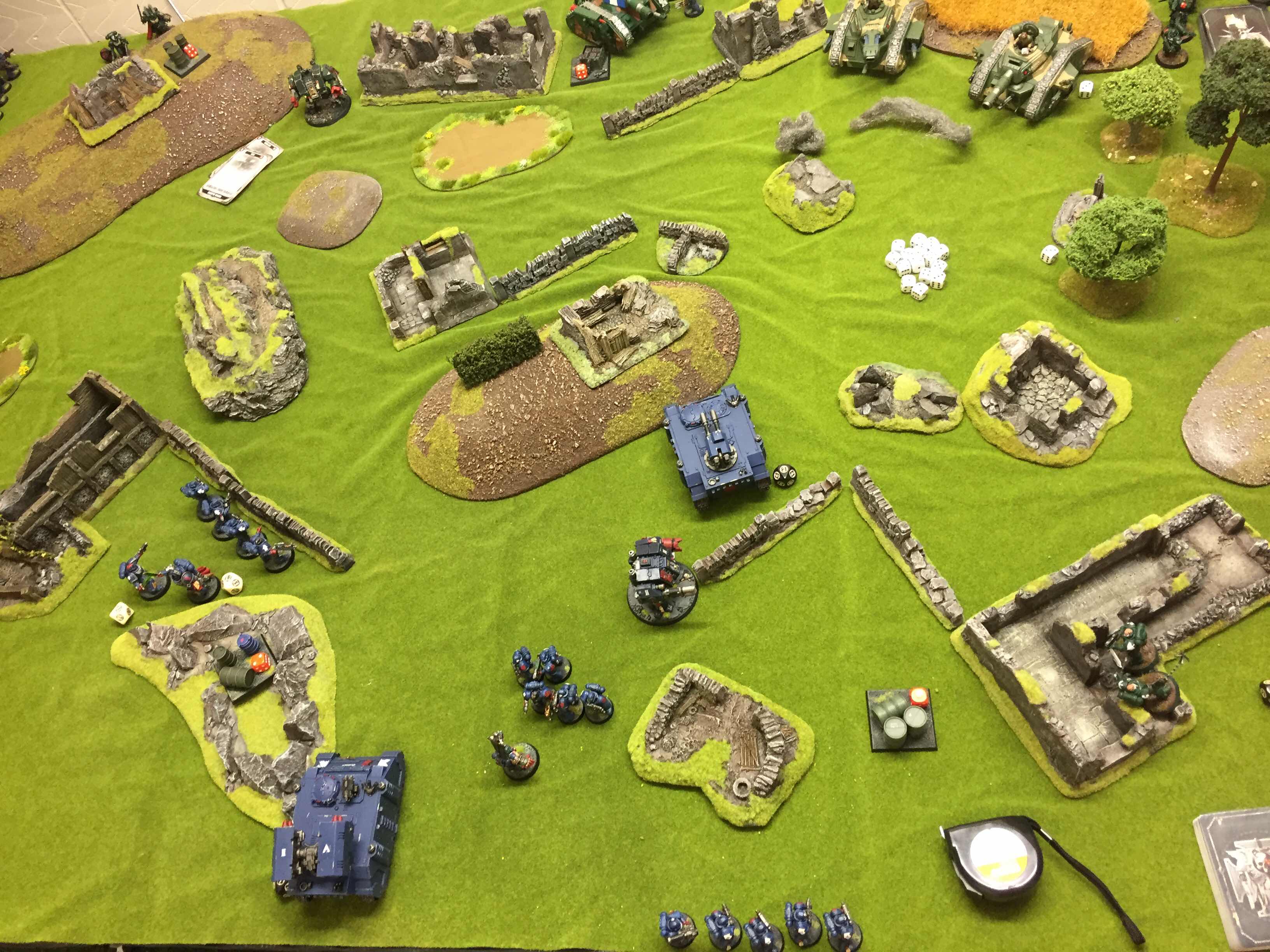 In the end I was able to score a crushing victory of 11 Victory Points against my opponent’s 3 Victory Points. I’d like to say that this result was down to my sheer tactical brilliance; but that would be an exaggeration. I was very lucky in that the random Tactical Objectives generated were a lot kinder to me than they were for my opponent. However that being said I was able to generate a plan early on and stick to it; ensuring the right units were deployed to tackle the appropriate targets and systematically eliminate them.

Overall this was an awesome afternoon of gaming and the whole thing flew by. We thoroughly enjoyed the battle and it has spurred us on to plan a full campaign in the near future.

Posted by LegioCustodes at 16:38