So I had my mate over to my house the other day in order to play a game of the new edition of Warhammer 40,000; as previously stated I am a massive fan of the new version of the rules and as such I was keen to get another battle under my belt.

The majority of members of my usual gaming group are casual gamers and so we use the fairly informal but relatively balanced Power Points system to put our armies together. This system is ideal for quickly assembling a force and provides a fairly equal fun game for the majority of situations... Though it is vulnerable to exploitation by power gamers! 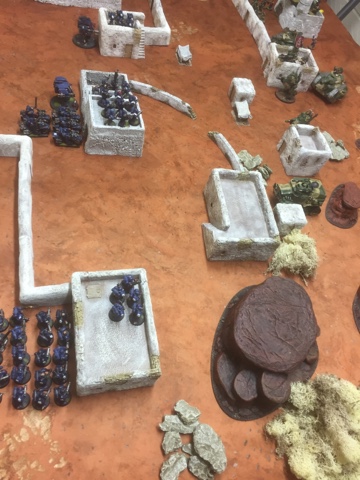 I fielded a sizeable force of my Crimson Fist Space Marines led by the freshly painted Chapter Master Pedro Kantor whilst my opponent commanded a combined army of Imperial Guard and Dark Angels Primaris Marines. 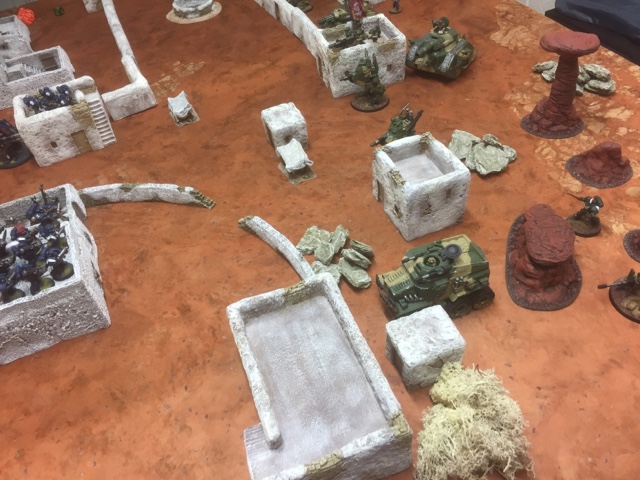 We fought over a desert battlefield that was designed to simulate a small settlement on an arid Imperial Feudal World situated somewhere on the Eastern Fringe. I really like this set up as I think it's very reminiscent of the old school Ork settlements from second edition. 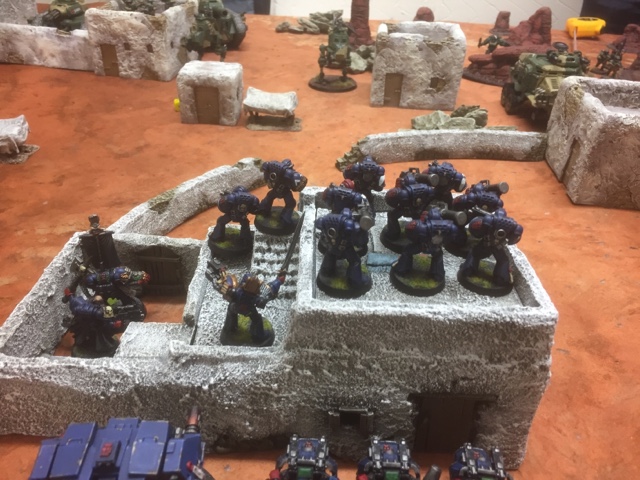 We decided to skip using any specific missions or objectives and instead focussed on a good old 'kill everything on the table' scenario with both forces slugging it out until everyone was dead. 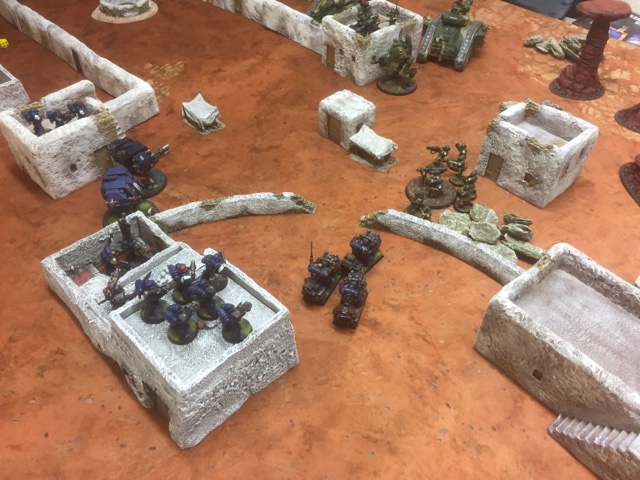 Both forces set up a strong firebase in their respective table halves in order to establish ranged supremacy across the battlefield. In my case the Crimson Fist's line was anchored by two dreadnoughts and a number of devastator squads supported by Pedro Kantor, a Librarian and a Lieutenant. Meanwhile on the opposite side of the table the Imperial Guard line was built around a number of battle tanks and a strong force of infantry equipped with heavy weapons. 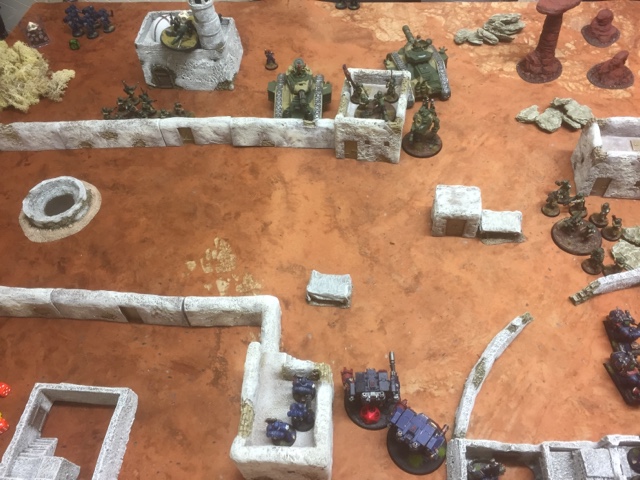 8th edition really rewards aggressive play and so both armies had some key units that could take the fight to the enemy. The Space Marines relied upon the sheer speed and durability of a heavily armed bike squad to punch through the Imperial Guard lines, however they were quickly gunned down in a particularly unfortunate round of overwatch shooting...

The Guard utilised a squad of Storm Troopers mounted in a Taurox APC and a couple of sentinel walkers to act as their strike units. Initially these guys took a heavy toll on the nearby Space Marines... However a volley of concentrated fire from the devastator squads soon slayed them in short order.

It has to be said the shooting system in 8th edition is particularly brutal and by choosing targets wisely a commander is able to neutralise key enemy threats in devastating volleys of death. This is further compounded by the new morale rules which can cause an embattled unit to suffer further casualties when it fails a leadership test. 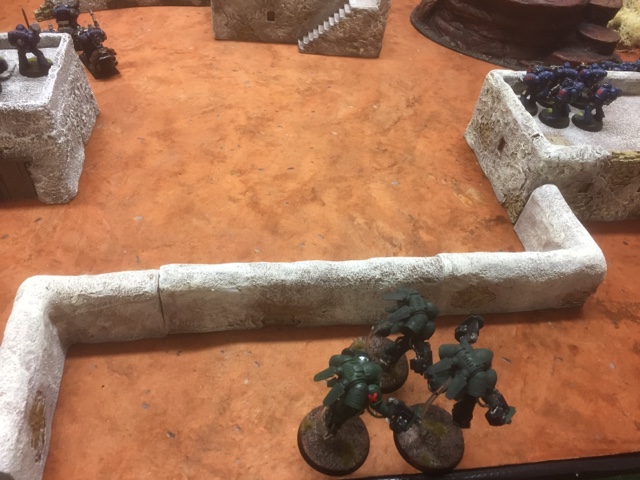 Deep striking units are also much more useful in this new version of the game as they can appear anywhere on the table that is more than 9" from the enemy and there is no chance of horrendous mishaps decimating your steely-eyed dealers of death before they even manage to get a shot off. As such these warriors tend to appear more often in games as area denial units and are really effective at putting opponents on the back foot.

In this particular game I dropped a unit of assault marines armed with plasma pistols and a terminator squad in the rear of my mate's deployment area. These guys wreaked absolute havoc and ploughed through his tanks and infantry like a tsunami. However my elation was short lived as my own lines were then butchered when units of Dark Angels Reivers and Inceptors appeared out of nowhere to brutally slay my own troops. In particular the Inceptors are a terrifying prospect to face as each of these marines wields two heavy bolters and can really take a heavy toll on nearby units.

The game was a close run thing, but my mate managed to endure slightly longer than I could and as such he won the war of attrition and took a marginal victory (which was well-deserved)!

Overall this was a really exciting game and it highlighted just how much fun (and how brutal) the new version of the game is compared to its overly-complicated predecessor. We both had a great time and each turn was tense as overall battlefield dominance swayed between the two sides multiple times.

The more I play 8th the more I love it! It has really re-ignited my hobby mojo once again.... That reminds me... I must buy some Inceptors for my own force!

Posted by LegioCustodes at 12:53