Finally I've managed to finish off some troops that I have been working on for quite a while. I initially started these three five-man devastator squads back in April after I completed work on my Imperial Knights. I have been doing bits on them on-and-off between other projects since then.

When I first started work on these guys 8th edition 40k hadn't yet been released and so Grav-Cannons were still awesome; however under the new rules they are considerably less potent...but they still look cool. To be fair they are still pretty handy against power-armoured and terminator-armoured troops and walkers.

Having grown bored of batch painting models I painted each of these miniatures to completion individually before moving on to the next one. I found this a much more rewarding way of painting though admittedly it does take considerably longer to complete squads.

Annoyingly when I varnished these fellas there was still a slight loss of colour tone and a marginal frosting effect...however I need to remember that these are playing pieces and not display models... So it's important that they are protected against the wear and tear that they'll be exposed to on the game's table and in transit. 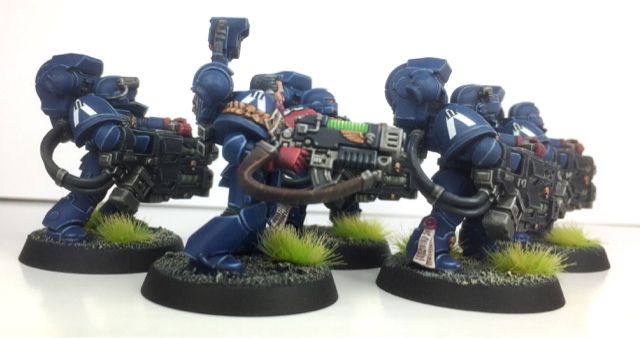 Normally I'm a free-hand man when it comes to squad markings but I thought I'd give decals a go on these three squads and thus I utilised the devastator transfers that came with the models. I am really happy with how these came out, especially after I used multiple layers of Micro-Sol and Micro-Set to fix them in place.

Next up I think I might start working on some Hellblasters from the Dark Imperium boxset to further augment my Astartes' ranged-fire power and expand my growing ninth company of the Crimson Fists!