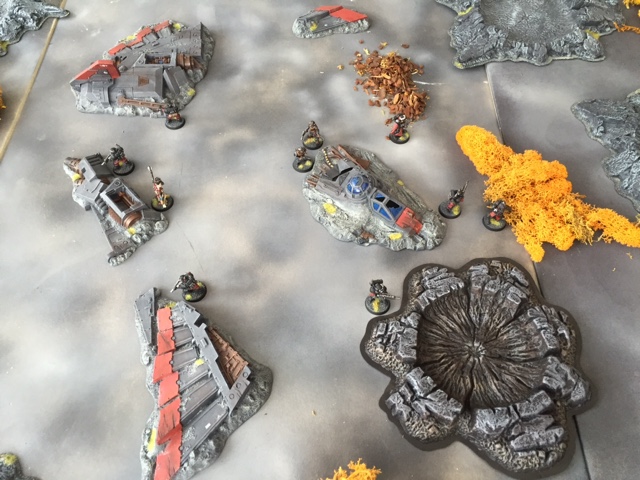 The Inquisitor shakes her head as she tries to regain her bearings following the shocking impact of the crash. Looking around her as the smoke begins to clear she is relieved to see that despite the violence of the landing all of her troops and flight crew have managed to survive with only minimal injuries.

Despite a throbbing headache her Inquisitorial training kicks in and she swiftly grasps the gravity of the situation that now presents itself. Her shuttle has been shot down by a surface-to-air weapon system, which means enemy ground forces must be located nearby and are more than likely en route to the crash site location. If her force is to stand any chance of survival she will need to marshal them quickly into a position where they can repel possible attackers, and so without delay she has her troops form a defensive perimeter around the smoldering wreckage of the shuttle craft. 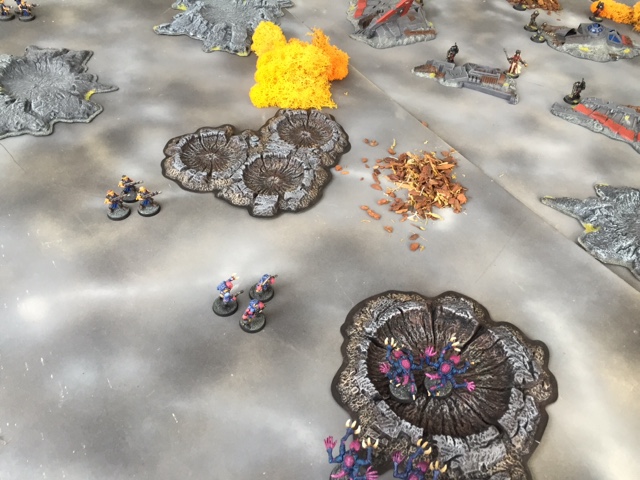 Her fears are quickly shown to be a reality and soon a Cult force of brood brothers, hybrids and purestrains emerge from the smoky gloom and begin surrounding her position. 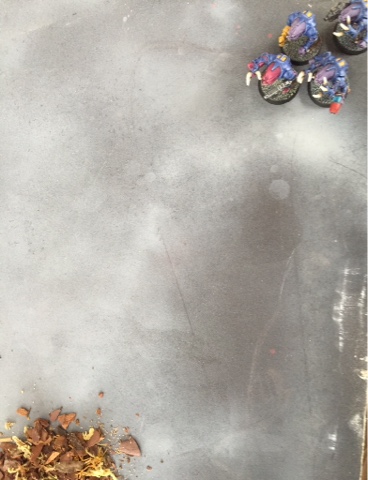 A cursory glance at the forces arrayed against her shows the Inquisitor that she is facing a well armed and motivated force, she will need to act quickly in order to avoid being overwhelmed and butchered. 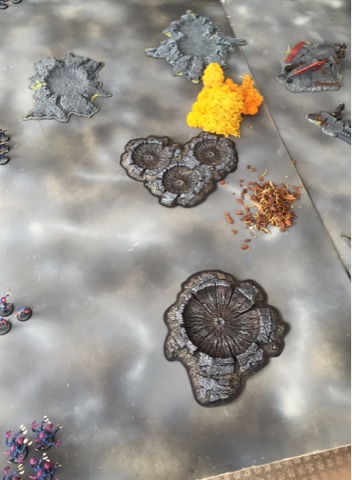 Luckily there is an abundance of foliage, shuttle wreckage and craters nearby that the Imperial forces can use to form a strong baseline of firepower with which to dominate the surrounding area. 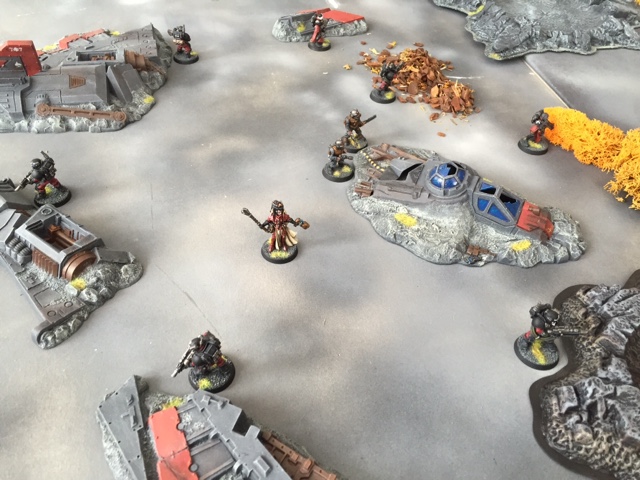 However with so few troops at her disposal the Inquisitor will be hard pressed to cover all angles, and every casualty that her forces sustain will result in gaps in the line forming. With this in mind she pushes the well-trained Storm Troopers and Battle Sisters out to the perimeter whilst keeping the two less potent flight crew in the centre of her position, these auxiliaries will remain ready to plug any holes that form in her cordon. 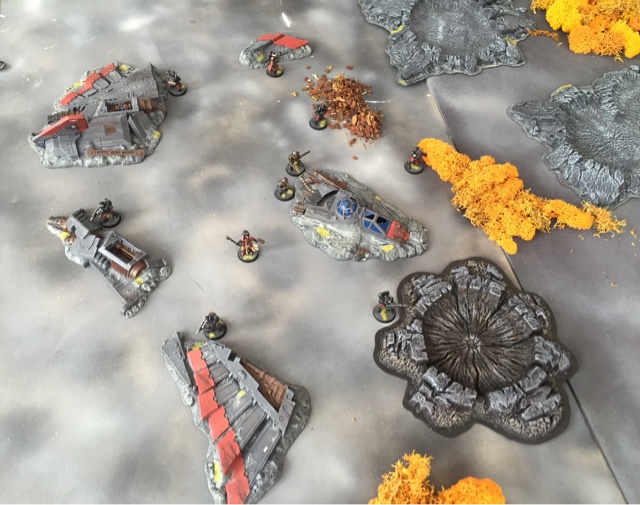 The Inquisitor herself will roam around the line, using her prodigious skills and inspiring leadership to reinforce any weak points and prevent the overall defence from collapsing. It is going to take every bit of her martial prowess to survive this encounter intact. 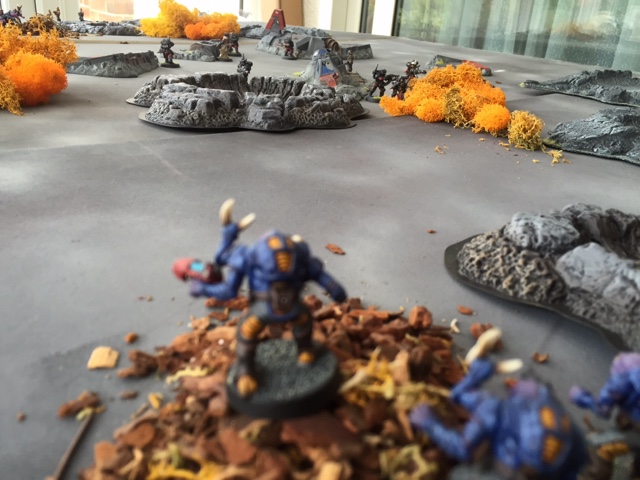 As the Inquisitorial forces ready themselves for a bitter fight for survival the genestealers too are preparing for the battle to come...creeping into position, utilising the natural features to cover their advance. 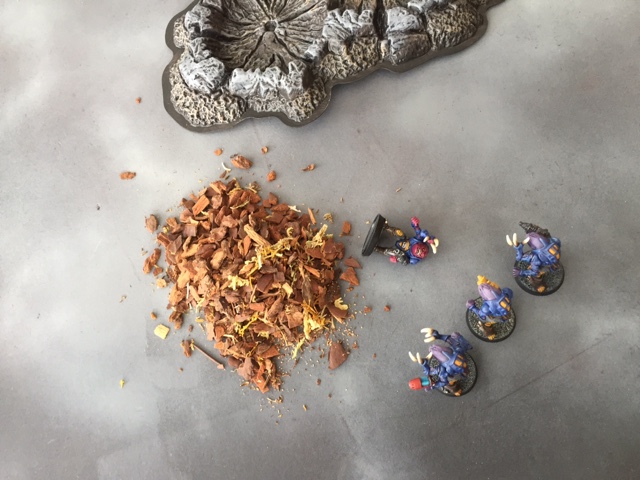 Having faced this foe before the Imperial troops know that the most potent threat comes from the purestrains and hybrids and so focus on these high-priority targets with their first few rounds of shooting. Volleys of lasfire and bolt rounds quickly start to pulp the unarmoured bodies of the xenos foe. 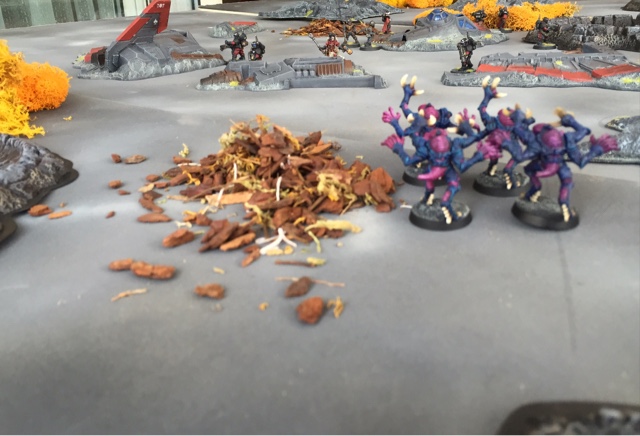 The speed of the purestrain genestealers is truly terrifying to behold (12" on the run)...nearly as terrifying as their sheer lethality in melee combat. 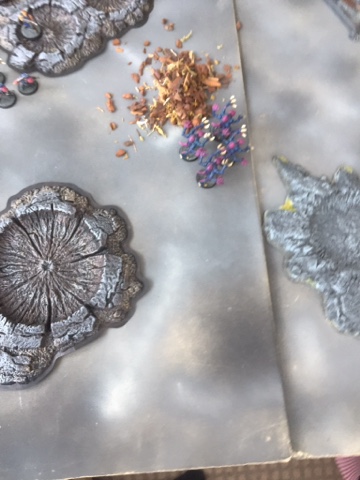 These agile foes begin to swiftly cover the distance between them and the surviving Imperial Troops, they are aware that once they enter close combat they will be all but unstoppable. 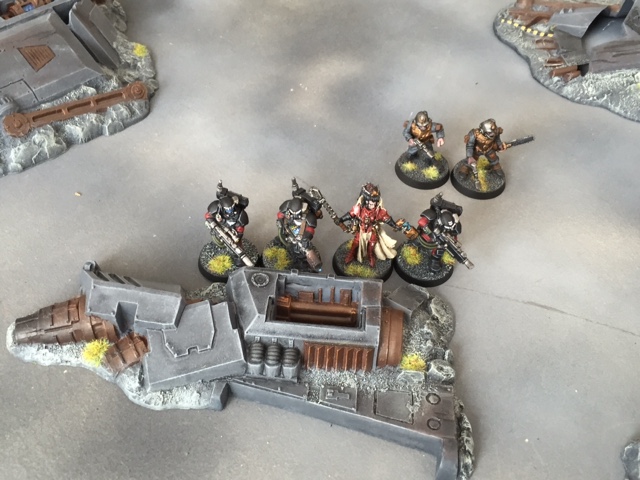 Athena is also conscious of the threat posed by these alien scum and so moves three of her troopers and the two pilots into a firing line behind a burning piece of fuselage nearby. Once in position they unleash a devastating barrage of fire into the genestealers. 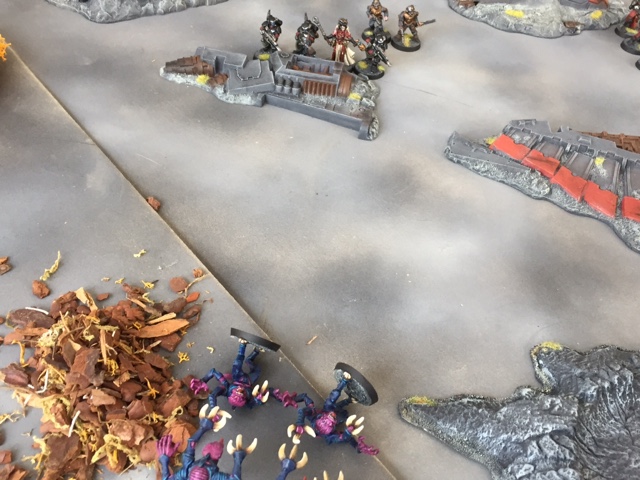 The air is soon filled with the screeching of dying aliens as they are bisected by sustained lasfire that burns through their chitinous hides and pulps their internal organs. The Imperials breathe a sigh of relief as the aliens are temporarily pushed back... 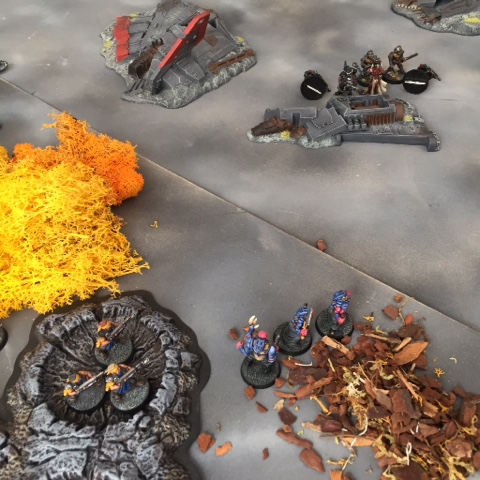 ...However by focusing their shooting on the purestrains the Imperial soldiery have failed to mitigate the threat posed by the brood brothers and hybrids who are toting a vast array of ranged firepower. This proves to be a costly error and two Storm Troopers slump to the ground as solid autogun rounds smash through their visors killing them instantly. 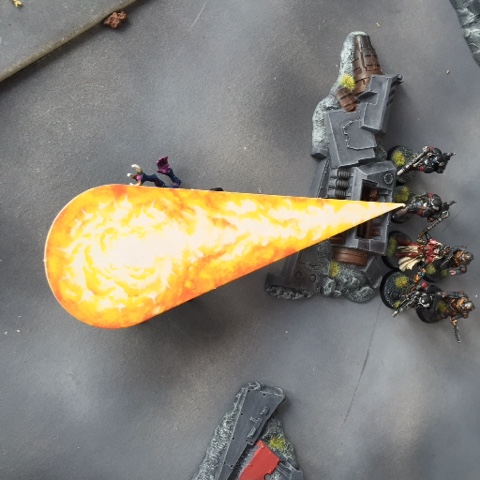 Despite these losses the Storm Troopers are able to muster a reasonable defence and use the sheer destructive potential of the flamer to wipe out the next wave of purestrains. The burning fuel cooks the foul creatures in milliseconds. 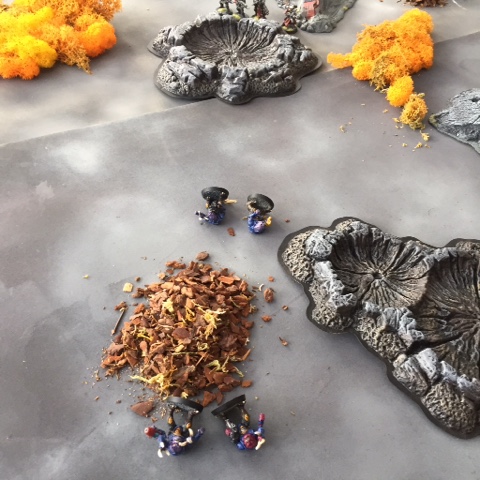 Meanwhile on the opposite flank the other Storm Troopers together with the Battle Sisters lay down a curtain of fire that slays all before it. If they can maintain this tempo then there is a possibility that they might be able to carry the day. 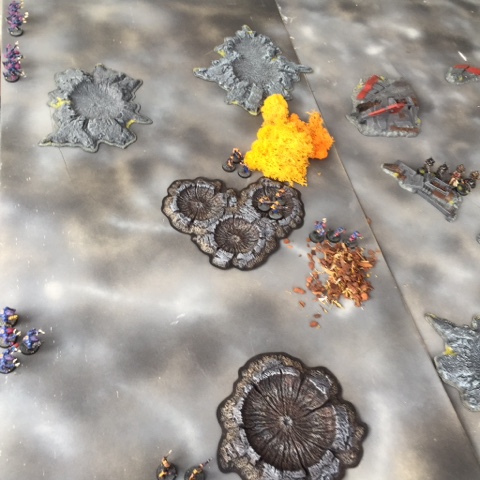 But he situation soon takes a turn for the worst as further alien reinforcements begin to appear from multiple entry points around the table. 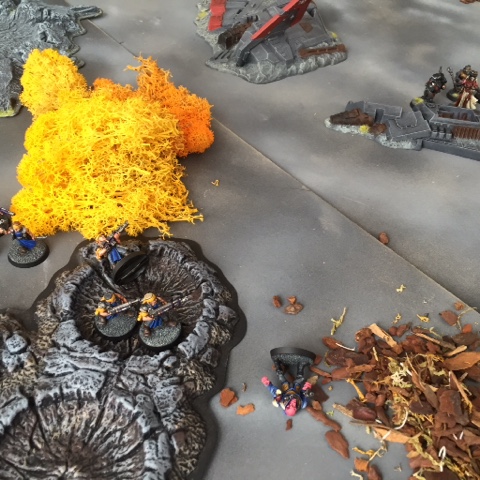 It seems that for every Genestealer slain the cult has another two ready to take their place; nonetheless the Inquisitor's soldiers adhere to their training and disciplined fire continues to reap a high tally of abominations. 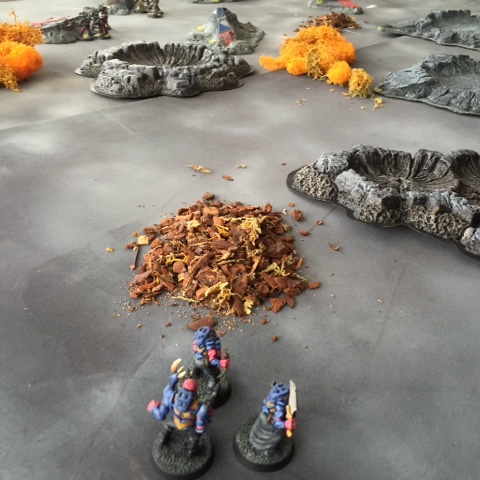 The Cult possesses a gestalt form of consciousness and is able to quickly learn from its previous mistakes, meaning that subsequent waves of cultists are able to make better use of cover than their predecessors. 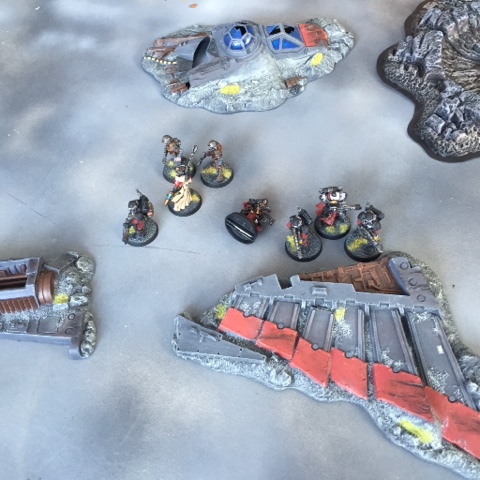 Soon the Imperial casualties hit a critical mass and the cordon begins to collapse on itself; no longer sustainable with such heavily reduced numbers. The Inquisitor has no choice but to pull the survivors together in a mutually supportive huddle and start to move backwards from the increasing threats. Despite these efforts further troopers fall to the relentless fire of the enemy and so Athena decides to leave one lone trooper behind to cover her fall back. It seems it is now only a matter of time before both her and all her warriors fall to the claws of these vile creatures. She silently vows to make them pay in blood for every life they have taken. 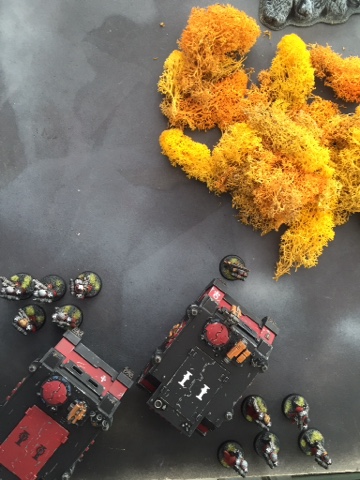 At the start of each turn I had the Inquisitor roll a D6, however she did not know what she was rolling for. Secretly I was waiting for her to roll a result of 6, and when she finally did this I sent her out of the room on a pretense of making tea, however upon her return she found that her dwindling force of survivors had been reinforced. 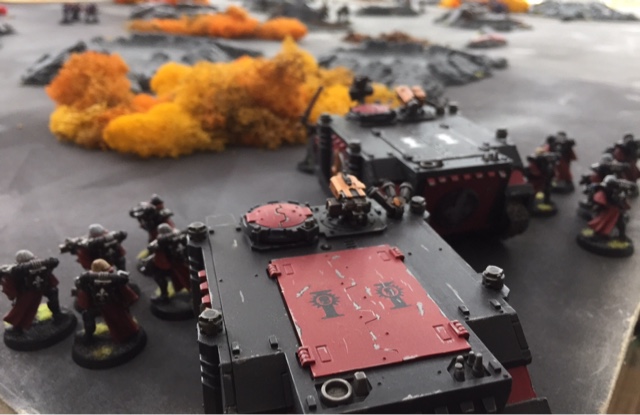 The Sororitas force that Athena had been en route to liaise with had apparently seen the shuttle being shot down and had dispatched a substantial number of Battle Sisters to effect a rescue mission.

Luckily they seem to have turned up just in the nick of time... 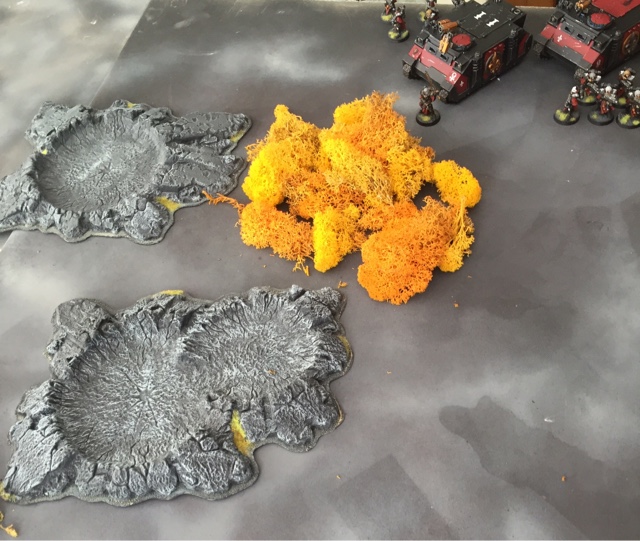 The Battle Sisters arrive with two Rhinos and a lot of firepower however the Inquisitor is no longer in the mood for a grinding war of attrition... 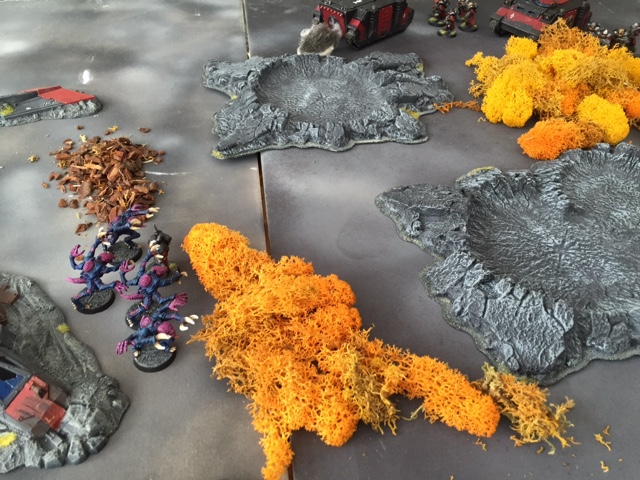 And so she quickly embarks on one of the Rhinos and escapes the table edge before the genestealers can do any more damage. 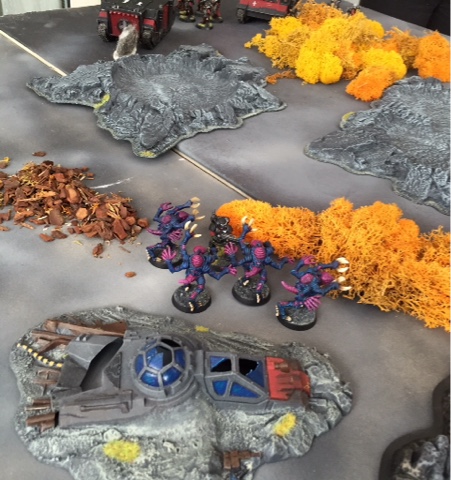 Alas in her haste to escape she leaves one poor Storm Trooper behind....apparently considered expendable his fate is sealed and he is quickly eviscerated in a welter of blood and gore.

And with that the game was over, despite the odds being stacked against her and the decimation of her initial force the Inquisitor has managed to escape the clutches of the Cult. Now with a large force of Battle Sisters behind her and some armoured firepower she might finally be in a position to go on the offensive and take the fight to the Xenos filth...