The game was based in GW's already popular Warhammer 40,000: Rogue Trader universe and was great fun. The boxed set was very well produced and contained everything you needed to start playing including rules, board and miniatures. In fact it was so good that it was awarded the 'Origins 1989 Award for Top Science Fiction or Fantasy Board Game', and its subsequent expansion Deathwing won the same prize a year later.

With this stunning set of credentials and the fact it takes merely a few minutes to set up it was clearly a no-brainer that this would be a fun way to spend a few hours over the weekend, and so I quickly opened the battered 26 year old box and dug in!

As per many of the games GW released in this period the rules come in the form of A4 black and white booklets, which were apparently designed to have the pages cut out and stored in ring binders (there's even markers to help guide your hole punch and a 'SPACE HULK' card spine to slot into your ring binder)

Historically I have been a bit of a child when playing this game and always insisted on being the Space Marines, however I have since realised that nobody really likes playing with a douche bag and so this time I took the decision to let my partner play as the Astartes and that I would command the filthy xenos..as she loves both Terminators and heavy flamers this suited her perfectly.

The mechanics of the game are fairly simple and revolve around Action Points (APs) which need to be expended to do certain things. As Genestealers are a lot more agile they have 6 Action Points each turn whilst Marines only have 4 Action Points. Additionally certain activities require more APs for a Terminator to complete than they do for a Genestealer which again reflects the difficulty of moving around in a giant suit of ceramite armour. A slight tactical twist in the game is that at the beginning of each turn the Space Marine player can draw a random number of Command Points (CPs) ranging from 1-6 and these can be used as additional APs that can be allocated to any of her troops, these are hidden from the Genestealer player and so cause an air of trepidation in any planning on their part.

The assorted missions in the game  are designed to be played as part of a sequential campaign and as such they become progressively more complex as you go on; therefore it made sense to start with Mission One; the appropriately named Suicide Mission.

So the objective of this mission is simply for the Space Marine player to get her Heavy Flamer model to the target room and torch it! What could be simpler?

Overall the first mission was great fun and provided an excellent introduction to the rules and mechanics without being too complicated. Technically the marine player is only supposed to have a limited amount of time to complete their turn (which decreases by a further 30 seconds if the sergeant dies), however we suspended this rule in order to avoid confusion whilst we became au fait with the basic mechanics; I would strongly suggest that any other beginners out there do the same.

I have to admit that my girlfriend played a fantastic game and her lucky allocation of 6 CP's in the final turn allowed her to sprint away from the alien threat and achieve her mission! Top stuff, very cinematic. 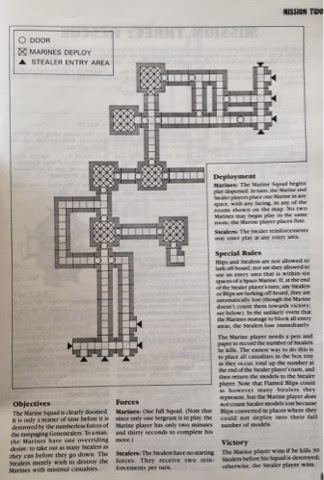 Next up Mission 2: Extermination. In this mission the Space Marines have been cut off from the bulk of their forces and have realised that they are going to die what ever happens. With this fatalistic attitude in mind their sole objective is now to kill as many of the xenomorphs as they can before the inevitable happens:
In order to achieve victory the participants in this heroic last stand are required to slay a minimum of 30 aliens before the last of them is reunited with Rogal Dorn in death. Challenging, but not impossible and I'm guessing that the Heavy Flamer will really prove its worth in this scenario as it has the potential to burn multitudes of the foe with each shot.

The second mission was even more fun than the first, and there were some really tense moments as lone Terminators cautiously traversed the dark corridors desperately trying to link in with their stranded brothers. It was inevitable that the Marines would all perish in a suitably horrific manner, but the question remained...had they achieved their goal of slaying 30 genestealers?

Well a quick tally revealed that these noble scions of the Crimson Fists Chapter had managed to kill 53 xenos, nearly double their original target. Whilst they may have died to a man for the Emperor they had achieved a Pyrrhic victory and their sacrifice would long be remembered by the sons of Rynn's World. 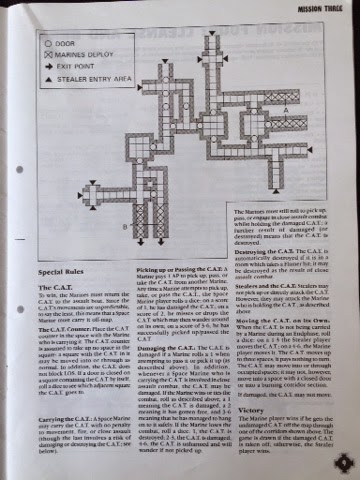 Finally we decided to play through the third mission in the campaign booklet: Rescue
In this mission the Marines have been sent to retrieve a C.A.T. (Cyber-Altered Task unit - not a meow meow, much to my girlfriend's disappointment) from the Space Hulk and return it to the landing boats so that the Astartes Commanders can analyse it for intelligence. Again a fairly simple mission but just look at that map...that's a long way to go, and there are a lot of genestealer entry points! 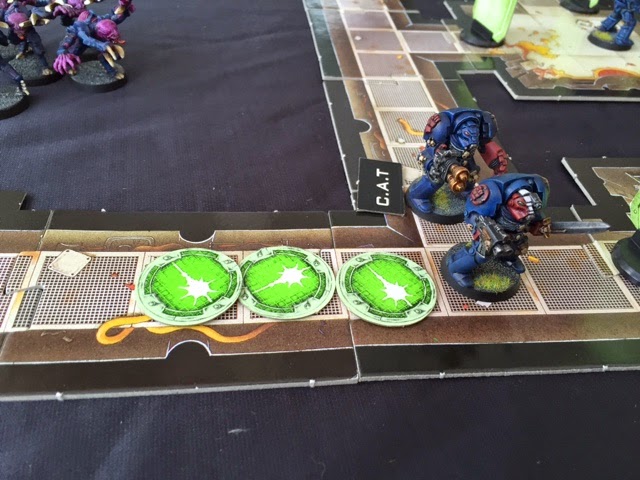 Well that was another nail-biting mission with loads of twists and turns, there were numerous points where I could literally taste victory as my alien hordes moved in for the kill. But at every opportunity I was narrowly beaten, whether it be by the horrifically accurate swathes of overwatch fire or sheer power of the flamer templates.

Nonetheless it was a well deserved Marine victory and though nine out of ten first company veterans lay slain, their geneseed rotting in their irreplaceable armour the C.A.T. was successfully rescued from the ship!! Good job Astartes!

What an absolutely great weekend of gaming that was, we both thoroughly enjoyed it and I was sad to be packing my models away by the end of it. Space Hulk is an absolutely great game, the rules are so simple you can pick them up really quickly, but the game and tactics are actually fairly complex and reward astute strategic planning far more than sheer bloody minded dice rolling!

I had forgotten just how fun this game was and why so many of my weekends were spent playing it back in the very early 1990's. Now that I have played it again I shall definitely be looking to get it out more frequently and my loving partner has already agreed to play missions 4-6 with me in the very near future! Hooray.

I am lucky in that I already own the two expansions (Deathwing and Genestealer) so I can really expand on the basic game once we are happy with the rules, and by sheer luck I went on eBay this evening and picked up a copy of the long out of print Space Hulk Campaigns book for £20 in an auction, this is a real bargain as it never sells for less than £55-90 when it appears at a 'Buy it now' price.

I shall of course update you with any future forays into the exciting world of Space Hulk!!

Posted by LegioCustodes at 10:57