We played Mission Four through twice, once with my girlfriend commanding the Terminators and then a second time with myself in the role of the noble Space Marines. I initially intended to only play as the genestealers for the whole campaign however my girlfriend's Terminators were swamped so quickly in this mission that I actually wanted to see if  there was a way of achieving victory by killing the two Astartes prisoners...the answer is probably not! 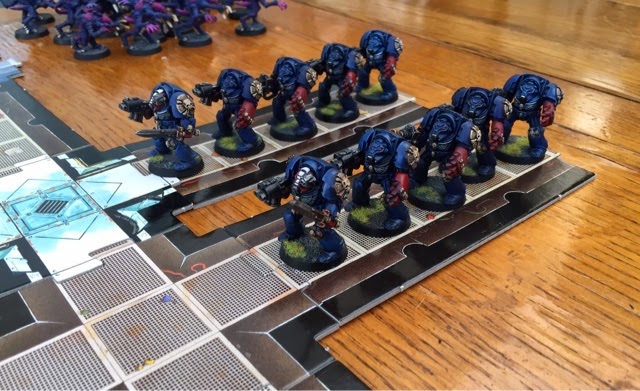 Things seem alright at the start of the mission, ten fully armoured terminators led by two sergeants and packing two heavy flamers...surely these heavily armed hombres can deal with any threat! 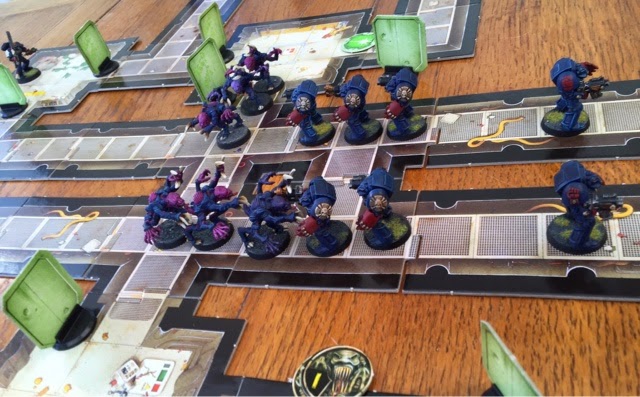 All they have to do is jog up the board and reach the captive marines... and then torch them....what could be simpler? 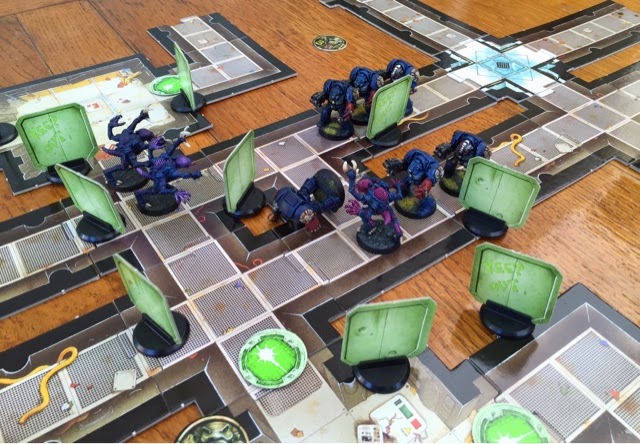 However things are harder than initial appearances would suggest and the blips and genestealers build up at an exponential rate... a rate that the marines just cannot possibly cope with. Storm bolters rapid fire until their barrels glow white and their mechanisms jam whilst on overwatch, heavy flamers burn through gallons of fuel until their reserves are fully depleted. The odds are well and truly stacked against the Terminators on this one!

Having played the mission through twice I have come to the stark conclusion that it is nearly impossible for the Space Marines to successfully achieve their goals on this one as the Astartes were resoundingly beaten on both occasions by the alien menace.

We had a chat after this game and came to the conclusion that the only viable tactic for the Terminators is to rely on getting good Command Points at the start of each turn and then sprinting the flamer Marine(s) across the board as fast as possible before the aliens are able to build up sufficient strength...however even then its a risky gambit that relies on drawing a good number of Command Points!


The fifth mission also starts with a deceptively simple objective, the Marine player once again begins proceedings with ten noble warriors of the Adeptus Astartes at their command, and all they need to do is get five of these super-soldiers across the board to a specified exit point...easy right? 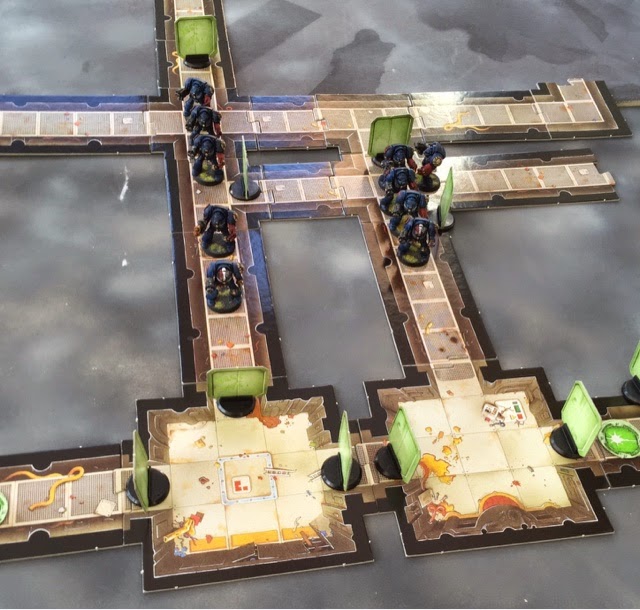 Wrong! Within a few minutes the hordes of vicious aliens are building up in vast numbers and the Marine player runs a real risk of being swamped by the massing packs of genestealers. 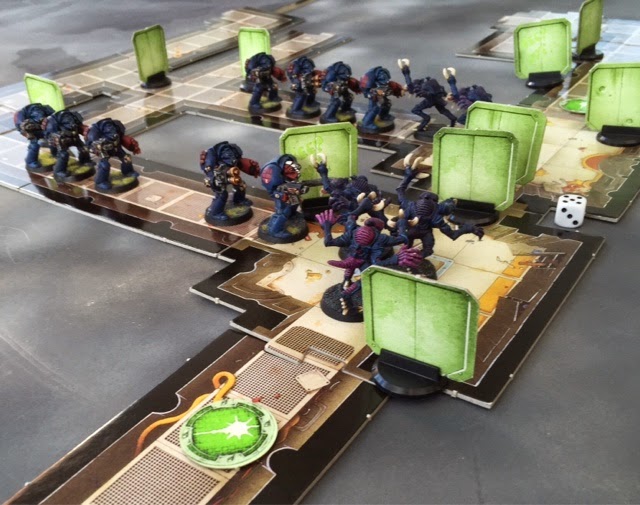 With this dire situation before them the casualties start to rack up at the rate of knots... 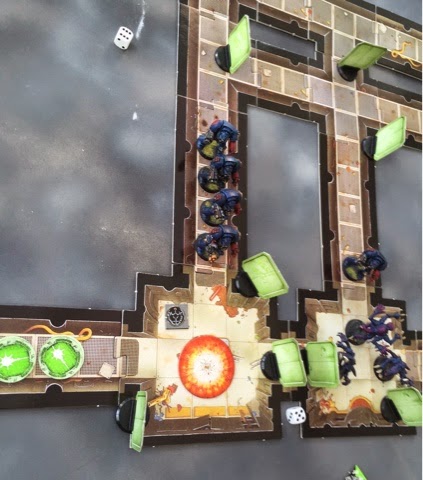 ...Even streams of burning promethium and volleys of storm bolter fire struggle to stem the encroaching tide of blue and purple chitin...

Inevitably the alien numbers proved too strong for the Imperial warriors and they incur too many casualties to be able to successfully fufil their victory conditions! With only three Marines left my girlfriend conceded defeat as she was no longer able to meet the requirement of exfiltrating five of her troopers.

Once again this mission seemed exceptionally hard for the Marine Commander as the sheer volume of genestealers piling onto the board each turn meant Astartes casualties came thick and fast. I'd be very interested to see how this mission plays out with some of the variant weapons options from the Deathwing lists, I have a sneaky feeling that an Assault Cannon on burst mode would make short work of the 'stealers...perhaps we shall have to give it a go! 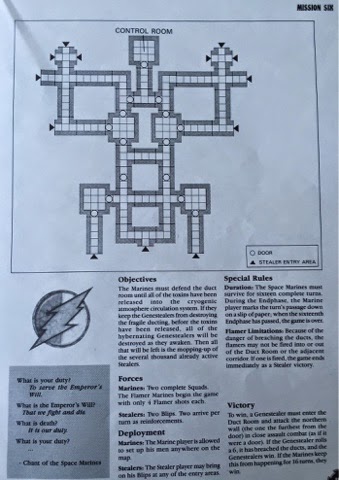 And with that we came to the final mission, this one was a bit of a change of pace for the Marines, for once they weren't on the offensive, this time their job was to simply dig in, load up and hold back the filthy xenos scum for sixteen turns whilst their brothers pumped poisonous gas into the Space Hulk's ventilation system.

My girlfriend set up the Marines in a solid defensive formation covering the majority of viable approach routes with strong fields of fire and the potent destructive capacity of the Heavy Flamers in close support. 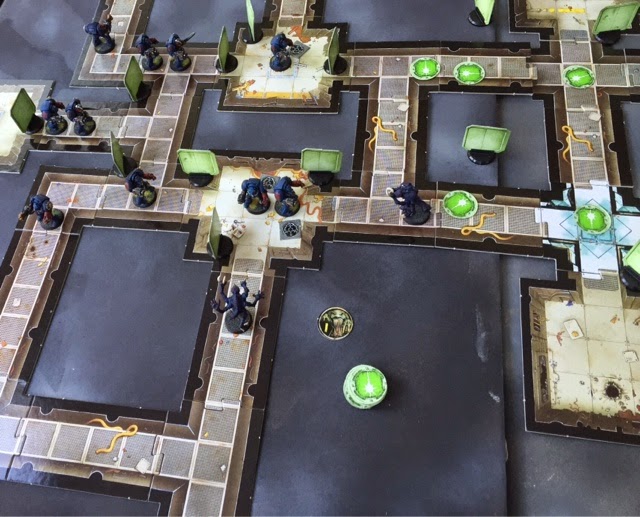 Initially this formation is able to stand firm in the face of the alien onslaught and the echoes of storm bolter fire can be heard throughout the vessel as they push back the enemy with mass-reactive bolt shells. 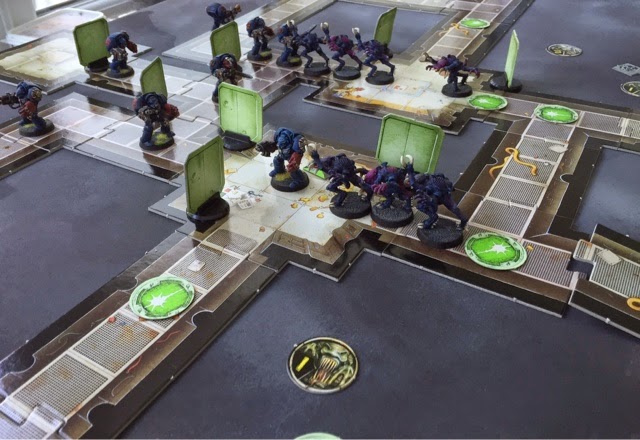 However this good fortune can't last forever and soon storm bolters start to jam and the enemy lifeforms begin to swarm the Marine positions. 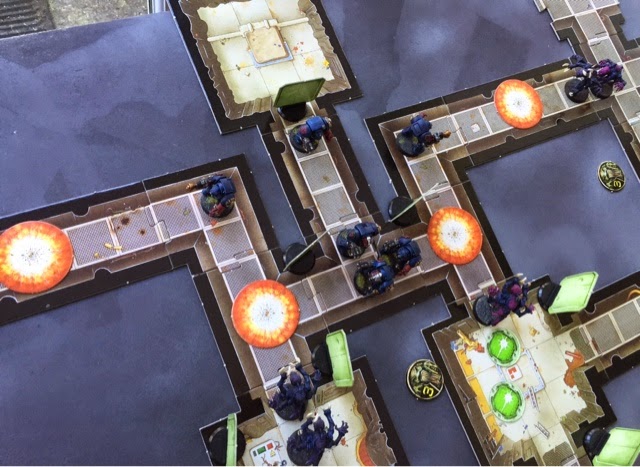 As the outer cordon begins to collapse the Flamer wielding Terminators prove their worth by torching corridor segments and genestelaers alike, killing mulitple foes and denying egress to the survivors. 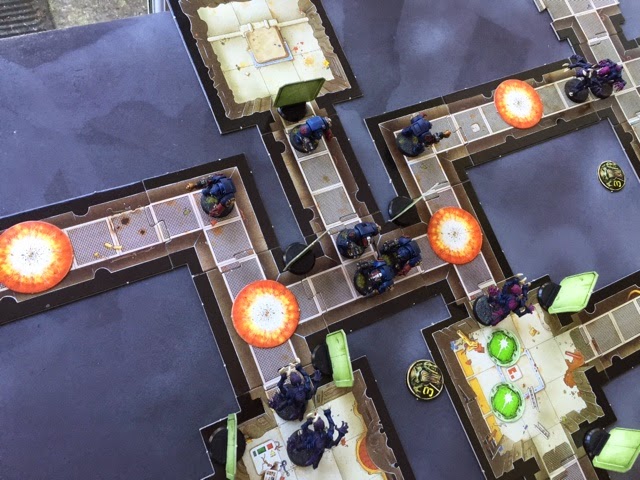 However with only limited fuel these super-weapons can't stem the tide forever and soon their promethium tanks run dry... 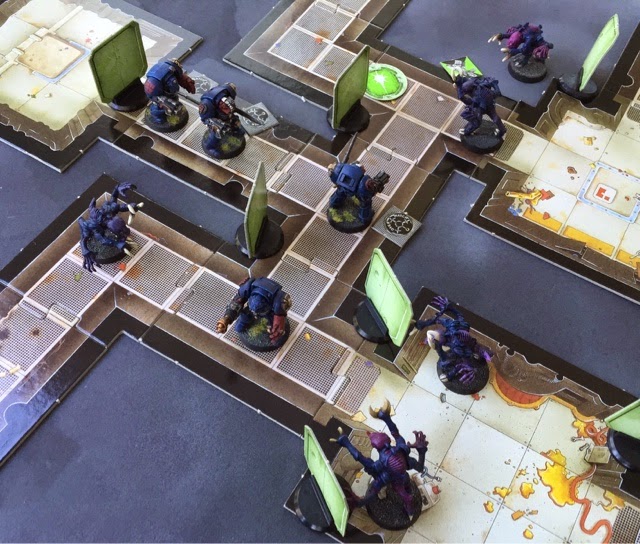 Despite the loss of the Flamer's ammo the remaining Marines still remain stoic in their defence, each noble brother fighting to their last breath to protect the control room from the amassing opposition. 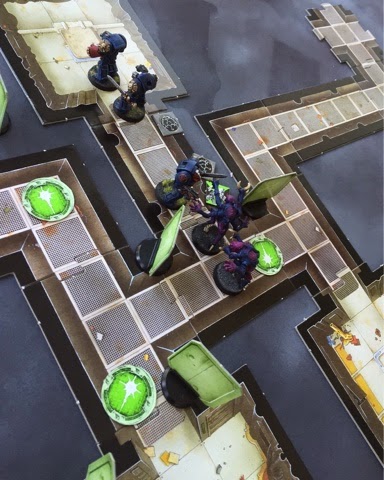 Despite this brave effort the Marine's second line of defiance also collapses and one of the noble Sergeants makes the heroic choice to hold the final corridor whist another two of his brethren fall back in order to set up a final defensive position... May the Emperor Protect them.... 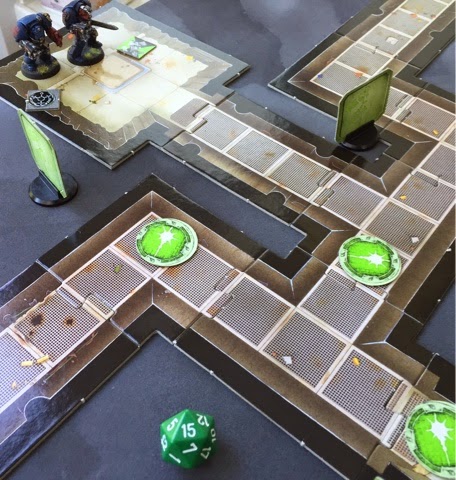 At this point as the Genestealer player I was pretty much convinced that I had the game in the bag, 80% of the Marines were dead, including their heavy weapons specialists and my alien monsters were well inside their final defensive perimeter...

However it wasn't to be!! At the last hurdle the brave warriors of the Crimson Fists showed why they are the finest soldiers that humanity has ever produced by cocking their bolters and slaying every last piece of alien filth that dared enter their line of sight...successfully holding out until the end of turn sixteen which meant that they achieved total victory!!

What a cinematic ending to this campaign ... I couldn't have scripted it better myself...

Two brave battle-brothers fighting back-to-back against insurmountable odds, knowing their end is near but battling on regardless...

“Then out spake brave Horatius,The Captain of the Gate:To every man upon this earthDeath cometh soon or late.And how can man die betterThan facing fearful odds,For the ashes of his fathers,And the temples of his gods”
Lays of Ancient Rome

That was a fantastic series of games, and I am so pleased that I have finally made it to the end of the Space Hulk Campaign (for the first time ever)... it was absolutely awesome. I have to admit that the middle missions do seem a little unbalanced in favour of the genestealer player but as I said earlier I reckon that the alternate army lists from Deathwing could do something to redress the balance.

I thoroughly recommend this game to any of you out there who have it but haven't had the chance to play it for a while, it is well worth dusting it off, setting up those jigsaw pieces and getting those Astartes patrolling through the corridors. Ave Imperator

As an aside... some of the guys over on the Oldhammer Forums asked to see some close ups of the Terminators that I used in this campaign; I am always happy to oblige and so I have posted a few photos of these below.

The models are all part of my large Crimson Fists force that I have been building piecemeal for the last thirteen years....

I really love these second edition Terminator Models as I think they are just fantastic sculpts, I know that the newer ones are far more dynamic but I still think these are much more evocative! Perhaps it's just rose-tinted glasses and my fond memories of second edition but whatever...They're great! I hope you enjoy them!

Posted by LegioCustodes at 15:11