I let him set up the terrain and then I chose the table edges in order to keep things fair. Keeping with the full-retro theme we used a green battle mat, authentic card terrain and some multi-coloured lichen transporting us into the Games Workshop battles of yesteryear! With the table set up we drew our mission cards: the guard were tasked with 'Take and Hold' while my own Crimson Fists drew 'The Assassins'.

The Imperial Guard were led by a Colonel along with his command squad equipped with a lascannon and plasma gun. His 'regimental units' consisted of two ten man squads both issued with missile launchers and plasma guns, these were supplemented with a heavy weapons squad equipped with three autocannons. His sole 'additional unit' was the imposing form of a Leman Russ Destructor...the Guard get some real bang for their buck; this was a lot of troops and materiel compared to the meagre forces my Astartes could muster for the same points cost! The heavy weapons squad were upgraded with the 'slick drills' veteran skill, meaning that if they hit their target with their initial shot then they would automatically get another shot...potent stuff, meanwhile the infantry squads were given the 'street fighters' ability which granted them some enhanced protective abilities whilst in cover.

I had a Space Marine Captain, a tactical squad and a terminator squad...only sixteen models! Wow...pretty heavily outnumbered!

'Form up maggots!' Bellowed Lieutenant Rock as he shouldered his shotgun and moved slowly forward through the rubble of the ruined town. It had been seven months since his platoon had defected from the Imperial Guard and established themselves as a mercenary force within the Oborealis sector and in that time his force had prospered, gathering a reputation for both victory and brutality in equal measure. Unfortunately this success had also drawn the attention of the Planetary Governor and Rock was aware that he was now a man with a price on his head.

He smiled as he glanced up at 'Old Painless', his men had liberated the tank from a Cadian armoured squadron a few weeks back and since then the venerable war machine had enhanced their firepower substantially. The presence of the Leman Russ comforted him, if there was a bounty on his head then at least he had some heavy firepower to deter anyone from coming to collect it.

Whilst Rock enjoyed the freedom of being a soldier of fortune the one issue that his force suffered from was any tangible logistical support. Without the grinding power of the Munitorium's logistical chain behind him he had become reliant on looted supplies to keep his force going...and that need was what had brought him to this wrecked township, a recovered map from a dead enemy officer had revealed the possible location of a Planetary Defence Force ammo cache nearby.

'Objective sighted!' Corporal Clayton's voice came over the vox-net, '200 metres north of our current location... but it's guarded; I'm trying to get eyes on the sentries...wait out.'

There was a momentary pause before the NCO's voice returned, notably tenser than before, 'Throne...they're...they're Space Marines...'

'Shit!' Muttered Rock shaking his shaved head, this wasn't part of his plan, not at all...But he had no choice, he needed those supplies. With the decision made he pressed the transmit stud on his own comm link; 'Bring up the damn tank!'

My small force of the Emperor's finest warriors set themselves up on each flank clearly hoping to use the assorted cover to allow them to pincer the mortals that dared oppose them. A combat squad was co-located with the Commander on the left flank whilst a second combat squad set up on the right flank with the Terminators to their rear.

Meanwhile the Guardsman spread across the entire front, the full heavy weapons team occupied a building on one flank whilst the command squad with the lascannon established themselves on the other side of the battlefield, also in hard cover.

With the fire support in place the tank and the infantry squads rolled up the centre of the line...and then the first shots rang out...

The first turn was relatively uneventful with both forces sacrificing much of their shooting in order to allow them to more effectively maneuver their troops into better positions.

However in the second turn the Terminators proved the sheer ferocity of the assault cannon as it unleashed its wrath upon the guard heavy weapon teams hidden in the building. The hard cover and walls meant little as the mighty shells shredded both brick and man alike. By the time the heavy weapon's barrels had stopped spinning five guardsman lay dead, and only one gunner remained in situ his face covered in the bloody remains of his fallen squad mates.

Nonetheless the men of the guard proved their mettle in the next turn as their heavy weapons retaliated... butchering a Terminator and two tactical marines... 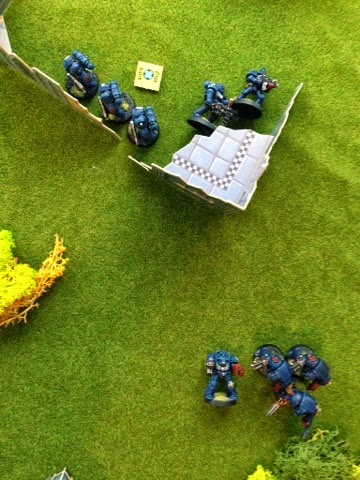 ...including the heavy weapons trooper...ouch!

Whilst their heavy weapons were keeping the Space Marines pinned in cover the Leman Russ rolled forward and the infantry squads scuttled around in hiding.

Having never faced Imperial Guard heavy weapons before I was suddenly beginning to realise the potency of their kit and even my Terminators took the opportunity to snuggle up to a nearby bush in order to get some respite from the bullets and laser rounds that were flying their way.

However this proved to be of little use as the Leman Russ unleashed it's terrifying volley of weapons at the noble first company veterans. Plasma rounds, lascannon blasts and the horrendous power of the Demolisher Cannon shredded Tactical Dreadnought armour and the men within as though they were wicker dolls (just look at the size of that template!) 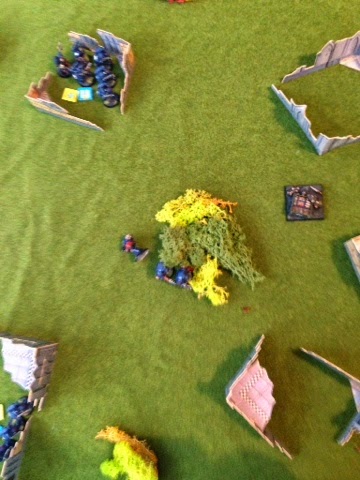 As the flames lapped their ankles and the smoke cleared only two of the azure terminators were left on the battlefield... 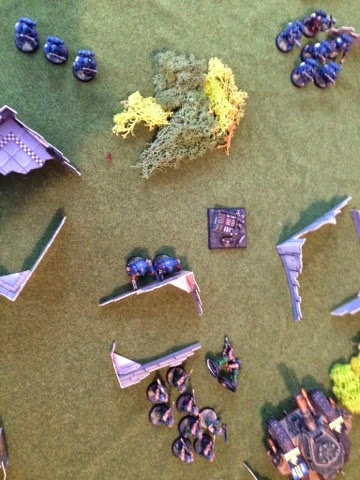 And they quickly took the opportunity to move forward into some hard cover...

Which resulted in the death of five Crimson Fists! That f*+king weapon is so powerful!!!

The Imperial Guard infantry squads then took the opportunity to jog forwards and seize the ammo cache that Lt Rock had tasked them to secure. The lone autocannon operator gave these troops covering fire to protect their advance, accounting for yet another Terminator.

The Space Marines were now heavily on the back foot, but the Emperor's Astartes are nothing if not stoic in the face of adversity and so the lone Terminator and nearby combat squad leveled their bolt weapons and unleashed hell, taking full advantage of the 'Rapid Fire' special rule. Round after round of mass-reactive death pumped into the bodies of the Imperial Guardsmen, killing nine of them and causing the survivor to flee in terror. 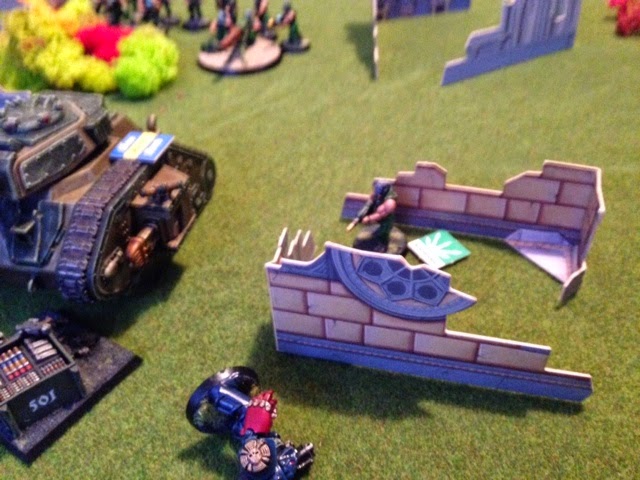 However the Terminator's celebrations were cut short as a lascannon shot slammed into his ancient faceplate. The anti-tank weapon punched through the ceramite of the armour, incinerating the veteran warrior's skull. He stood still in place for a moment before toppling forward in a heap of blue and crimson armour.


In the final turn both the Leman Russ and Astartes Captain rushed forward to try and seize/deny the central objective. However the speed of a main battle-tank proved to be superior to that of a genetically enhanced post-human and it finished the game fractionally closer to the ammo cache thereby wringing out vital victory points for Lieutenant Rock and his men.

As my mate popped on the kettle I tallied up the score, though I already had a fairly good idea of who had won!

Overall the scores were:

Wow...what an absolutely brilliant game that was (even though I lost)! I rarely play against a Guard force and so this was a real learning curve. The firepower these guys can bring to a battle is amazing, from individual heavy weapons squads to tanks and orbital bombardments. I looked on in horror as their heavy weapons cut down my men like wheat! Remember what I said in the last post about Terminators being nigh on indestructible.... I was wrong, the Leman Russ Demolisher is the perfect antidote to these venerable veterans, and the sheer massed firepower of heavy weapons squads comes a close second.

My tactics for facing these guys failed right from the start ...namely at the point of initial army selection, my force was too slow moving meaning that they had to weather more time in the line of fire than they should have. In hindsight the tactical squad was shit for the points cost, and the Terminators were just too slow. I should have taken a devastator squad to secure the firing line, with lascannons to kill the enemy tanks and heavy bolters for the infantry. The Terminators would have been replaced with an assault squad, their jump packs would have allowed them to close the distance rapidly and the assorted close combat weapons would have made short work of the Infantrymen.

Overall we had a great time and both took a lot from the game. I have learned that I will need to tailor my approach for facing non-space marine armies in future...especially those with access to über tanks of doom!

Posted by LegioCustodes at 14:58