Having created a few posts recently that have been slightly more modern than my usual Oldhammer vibe I have decided to go back to basics with a proper Old School Battle Report. This was a quick game played with my usual opponent (my wonderful girlfriend) using second edition 40k rules. 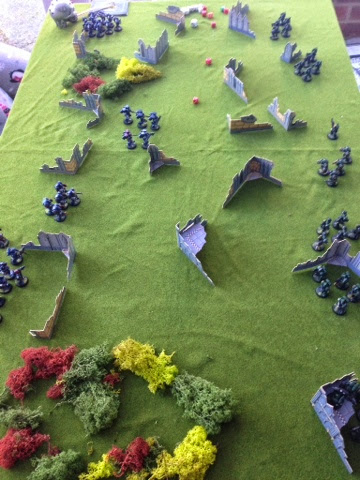 In order to really bring out the 1990s feel I left my modern buildings in the terrain box and instead littered the green battle mad with 21 year old card ruins and lichen (I love lichen), the battle field was roughly 5x3 foot.

The forces were kept deliberately small due to time constraints, and the army lists were taken from the black codex. Each army consisted of 1 x Captain, 1 x Assault Combat Squad; 2 x Tactical Squads and 1 x Terminator Squad. 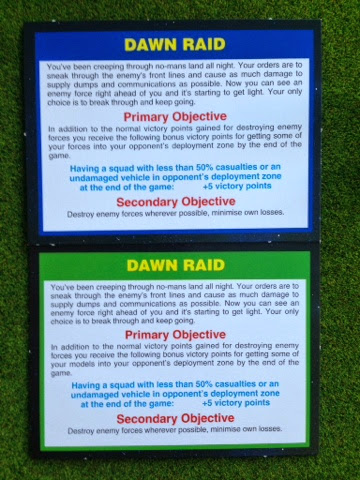 We drew our missions from the card pile, both ending up with Dawn Raid meaning that we would get an extra five points for getting some troops into the enemy deployment zone.

With this in mind we rolled to see who went first, as my usual my girlfriend won and her Crimson Fists set about unleashing hell on my Salamanders. 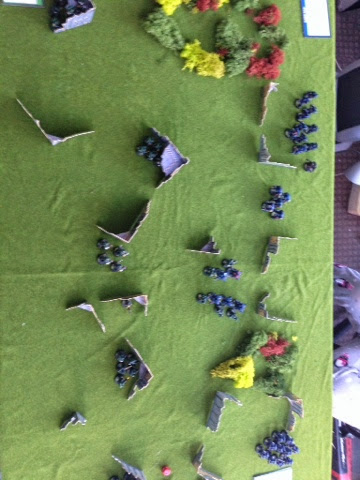 The sons of Rogal Dorn started moving across the battlefield, taking opportunistic shots when the chances arose, but predominately focussing on covering distance. 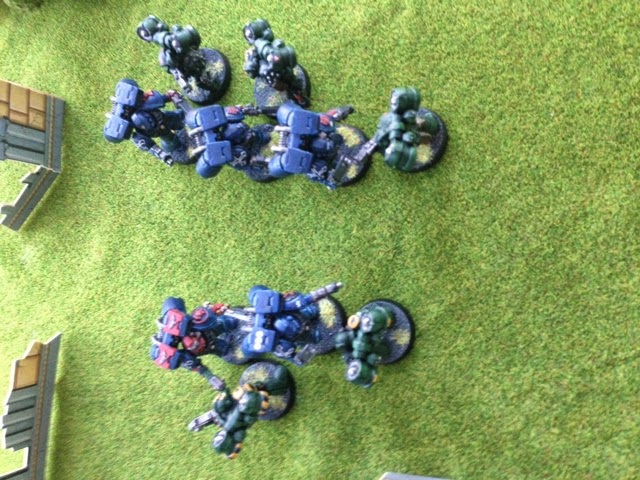 The two assault squads used their jump packs to power into each other, chainswords rising and falling  as the Emperor's Finest tried to butcher each other. 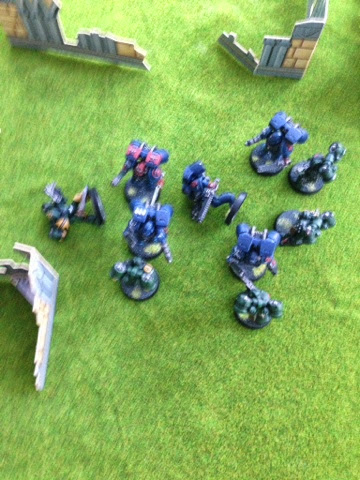 However the marine's armour and toughness substantially limited overall casualties and only one warrior from each side was felled, tellingly both marines were killed by short range blasts from their opponents plasma pistols. I forgot how much more fun the old one-on-one close combat rules were compared to the modern mass group rules, however that being said they are only really suitable for smaller games. 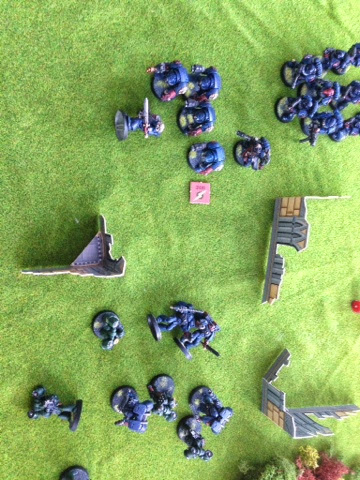 The assault marines continued to hack at each other in the next assault phase with more battle-brothers eventually succumbing to the blows of their foes. Meanwhile the opposing squads of terminators opened fire on each other, storm bolters frequently rolling jams on the old-school sustained fire dice. 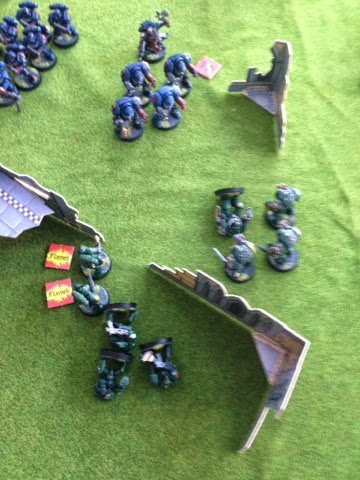 Simultaneously two rather unlucky marines from a nearby combat squad were set aflame and ran around screaming whilst their brothers were slain by a concentrated volley of bolter fire into their ruins. 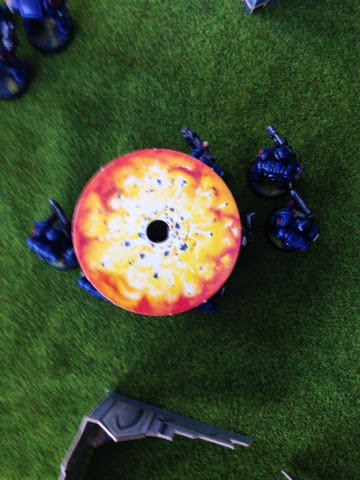 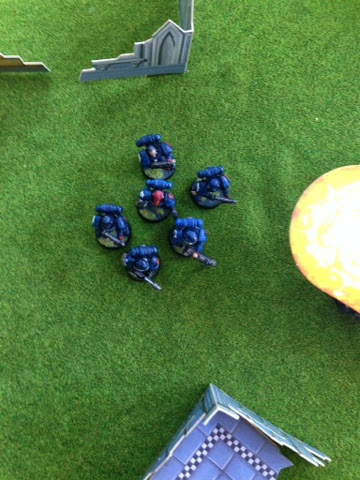 However the Salamanders took their vengeance for the dead marines by firing a frag missile into the oncoming enemy Astartes, killing five in one burst. 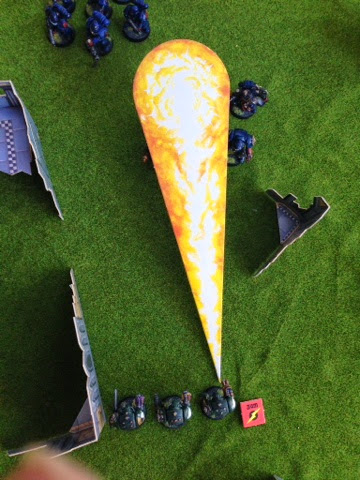 The elite terminators continued their firefight at close range, finally at a distance to bring their heavy flamers to bear!! 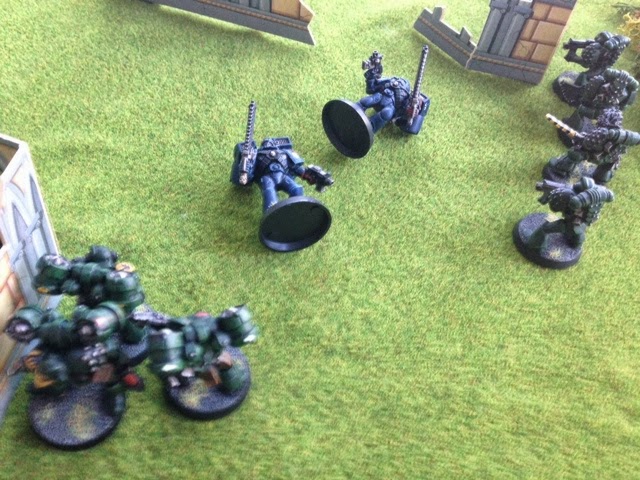 A Salamanders combat squad proceeded to join their assault brothers in the ongoing melee, tipping the scales and bringing the sons of Vulkan victory. Both squads then consolidated two inches either darting for cover or sprinting towards the table edge respectively. 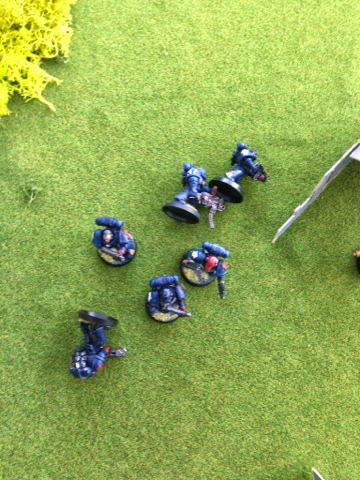 The Crimson Fists squad on the left flank continued to be whittled down by enemy fire, reducing their numbers substantially. 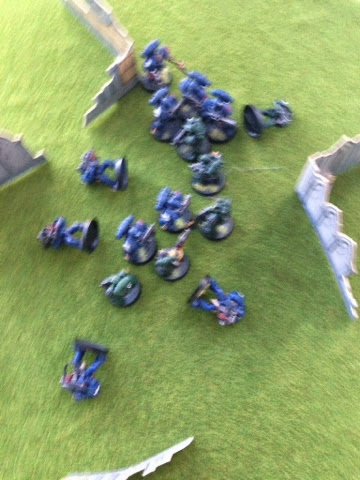 At last the troops on the right flank managed to engage each other and slammed together in brutal combat. Blood and body pieces littering the floor as the screams of the dying men filled the air. 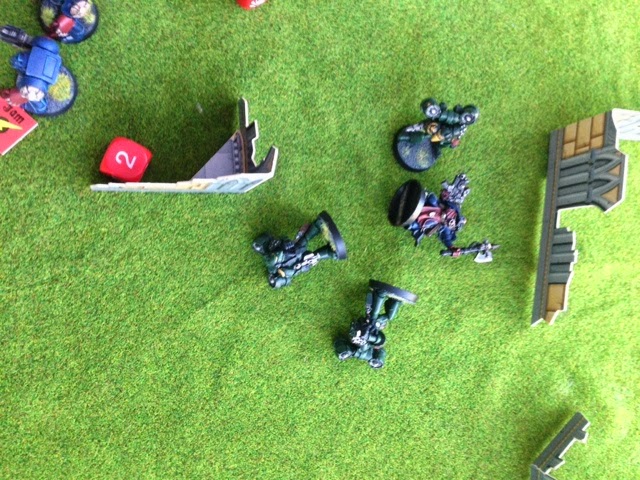 The survivors of my assault squad also launched themselves into combat, this time with the enemy Captain. This cost them dearly as two brothers fell to the enemy blades, but they managed to kill the warlord in turn, so their sacrifice was worth it. 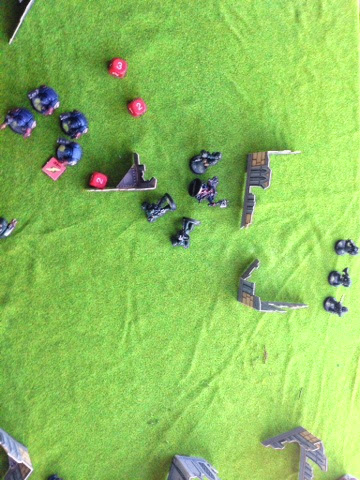 This however was a distraction to the main event as one of my combat squads used the distraction to dash into the enemy deployment zone and secure five additional victory points.

And at the conclusion of the fourth turn the game came to an end and it was time to count the victory points!

Unusually I had managed to score a victory, the final tally being 8VPs to 2VPs. This was a great game and has really reignited my love for small second edition skirmishes! I'll hopefully try and play a few more games in the next few months!

Posted by LegioCustodes at 03:10