After a busy weekend of hobby activity I have managed to finish off another heavy weapons squad for my Rogue Trader / Horus Heresy Salamanders. 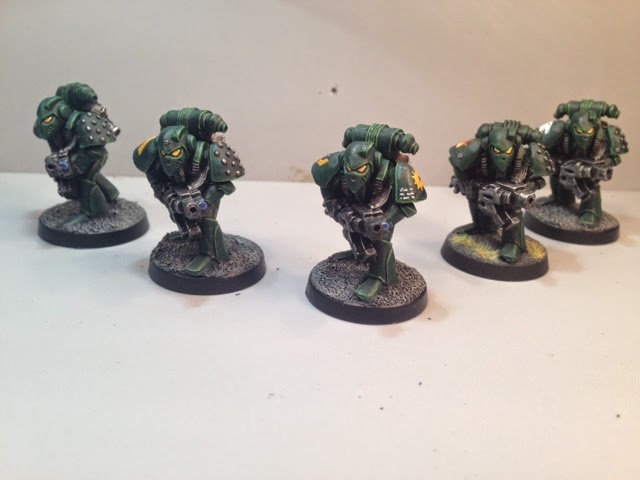 These models are all the mono-pose heavy bolter marines that were released in 1988, I have tried to overcome this high level of repetition by giving each marine individual markings/heraldry for a little variation. 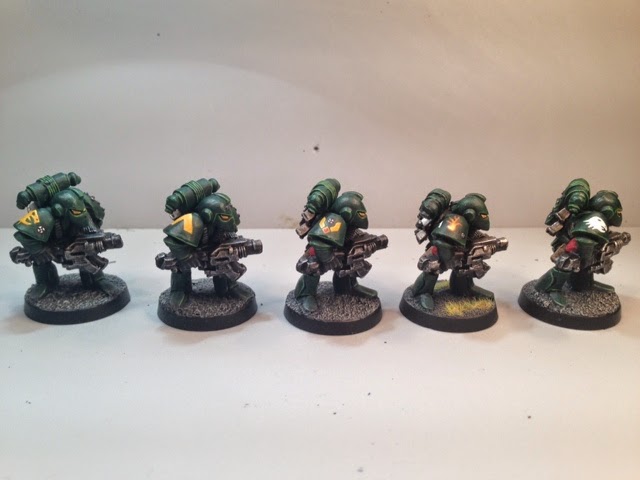 This squad came about due to my decision to re-structure my Salamanders in order to make a force that is legal to play in games of Horus Heresy (aka 30k). In this variation of the rules Heavy Support squads can be up to ten men strong, but everyone (that's right all ten) are required to carry the same weapon system, additionally tactical squads can only have bolters...no heavy weapons specialists! As such I have broken up my old devastator squads (who were equipped with mixed weapons) and am now gradually painting sufficient reinforcements to create a number of new five man units. You'll also notice that in these rules the squad sergeant carries the same weapon system as his troops, hence why the sergeant above (with authentic Rogue Trader rank chevrons) is also packing a heavy bolter.
Every trooper in this squad has the RT symbol for a heavy bolter operator (cross-hair in a circle) painted somewhere on their power armour, adding a sense of coherency to the unit, and tying them in nicely with their retro heritage. 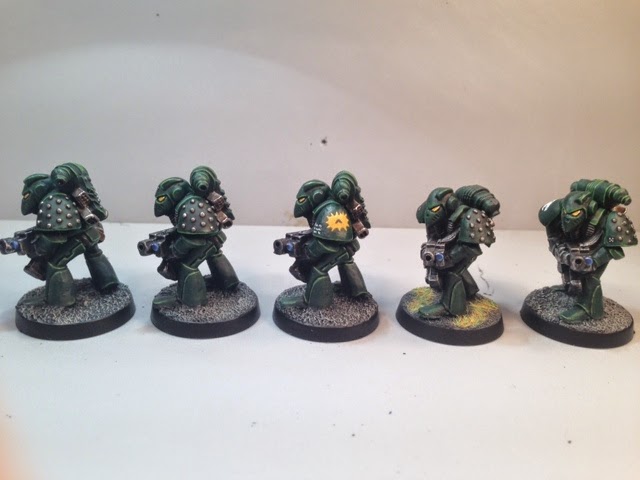 In order to add a bit of variation I filed the studs off the sergeant's left shoulder pad, giving me another blank surface to add some heraldry to. I used this  new canvas to paint the old RT symbol for a devastator (the bright yellow sunburst) surmounted by the more modern broken triangle.
Overall it took me a weekend to knock up this squad and I am more than happy with the results, they will fit in nicely with my growing force of 1980s marines. Next up will be a five man missile launcher squad. Watch this space!
Posted by LegioCustodes at 13:07