As promised I haven't left it so long between posts this time!

This time around it's going to be something a little different to my usual Astartes theme.  Don't get me wrong; Space Marines will always be my first love, they always have been since I broke open my first plastic beaky marines from the RTB01 box set. However; sometimes it's nice for a change to keep the painting fresh and interesting.

As such I have been working on a little sideline project on and off for a little while; The glorious Battle Sisters of the Adepta Sororitas.  These female warriors of the Imperial church are awesome models, though with the crappy new Whtie Dwarf Codex they are basically Space Marines Lite if you ever bother to play 6th Ed! These is furthe compounded by the fact that the 2nd Ed Codex was one of the weaker of the armies that were released, in fact it even says within the book itself that they will struggle as an independant force and should really be used as allies to other Imperial armies.

One thing that I do like about them is that they are some of the few models still available from GW that are still predominantly all second ed casts...anyway here's a few snapshots of my ladies: 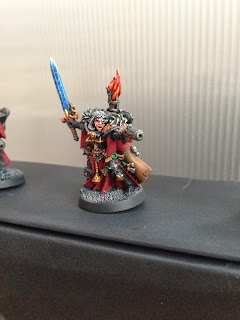 This is my Canoness; the leader of my force and I have to say I'm very pleased with how she turned out. The flames and the power sword have turned out well I think. 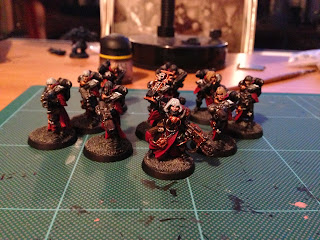 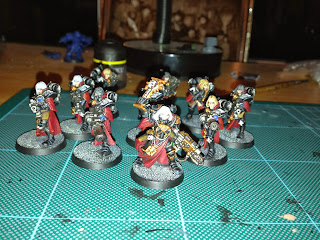 The squad above is my latest tactical squad (1 of 3).  The veteran sister is actually an old version of the Canoness from 2nd Ed.  I have to apologise for the poor quality camera work; it was late! 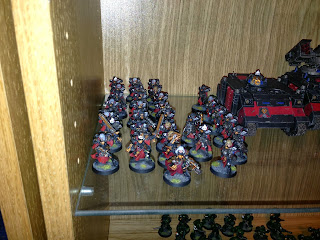 Here are my three tactical squads and a few vehicles that I have recently finished (eagle eyed readers will spot my Rogue Trader Salamanders on the shelf below!) 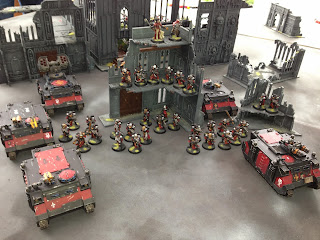 Here are a few of my girls getting ready to go to war with my mates Imperial Guard force.  They are displayed on a City Battlefield that I have built.  If you look in the top tier of the ruins you can see my female Inquisitor in the red power armour, she frequently takes to the field alongside the Sororitas. 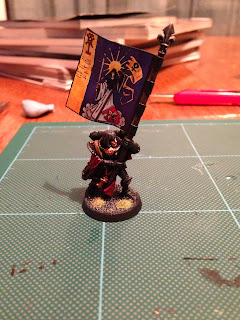 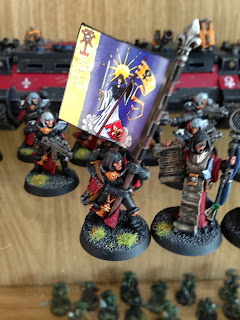 A couple of shots of my banner bearer carrying the old style printed banners thar came with second edition boxsets.  Sadly this model and the old banners are increasingly rare! 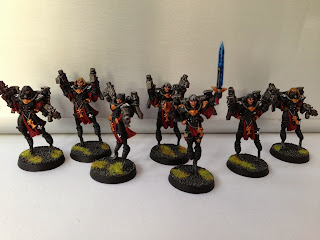 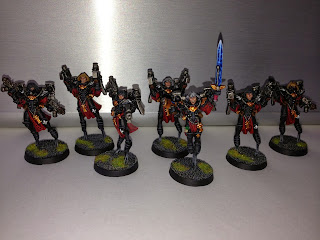 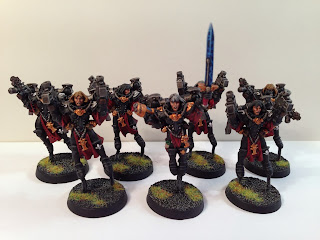 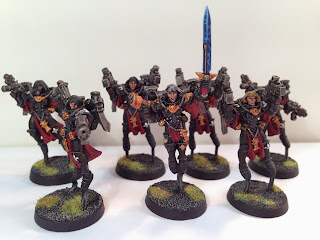 I have also just finished three squads of Seraphim for a bit of fast moving, power armoured goodness.  These squads do highlight one problem with the battle sisters models, simply that the lack of variety does lead to a fair bit of repetition.  Once again I am happy with how the power sword turned out. 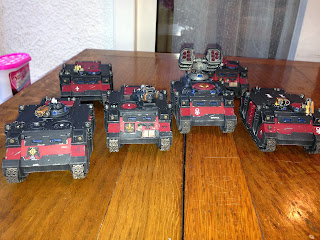 Finally a quick shot of my six vehicles (4 Rhinos, 1 Immolator and 1 Exorcist.)

I customised the Exorcist using an Immolator kit and a Whirlwind as I really don't like the organ style travesty that is the official GW model.  The Immolator is the resin version from FW.

Anyway that's it for this time around; I hope you enjoyed it!!
Posted by LegioCustodes at 09:59