Well as promised here is my second battle report from my retro games with my best mate the other day.  The first battle we fought was an exciting game of Rogue Trader and you can read all about this encounter in my earlier post from last Sunday.

For our second game we decided to do something a little different and so dug out our old school Epic (6mm) armies for a game of Second Edition Space Marine (c.1991).

I have played all versions of the Epic system that have been released through the decades and I personally feel that these are the best set of rules that GW ever produced for this scale.

In this battle report a force of mighty Space Marines will be fighting against....some more Space Marines; it should be...well...epic!!

Army Selection
For those not familiar with this rule set you'll be pleased to hear that army selection is a pretty simple process.  Each player chooses a number of company cards to represent the majority of their forces; these are a one stop shop and tell you everything that you need to know about the forces under your command.  For every company card (the large ones pictured below) you can select a further five detachment cards (the smaller ones) to support your main force.

These unit cards are also a key mechanic during the battle as when a certain amount of troops (described on the card) have been killed then this causes the parent unit to be broken; if this happens you hand the card to your opponent and he is awarded a specific number of Victory Points in addition to those that he has accrued from holding objectives(more on this later). This is actually very simple and fluid to use. 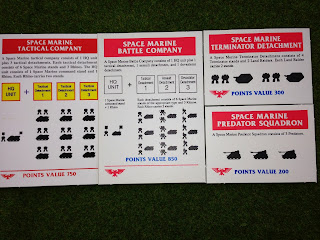 We went for a 2100 battle and so I took a basic Space Marine Battle Company (6 each of tactical, devastator and assault stands, 1 HQ stand and numerous Rhinos), a Tactical Company (18 tactical stands, 1 HQ, Rhinos), a Terminator Detachment (4 Stands of Terminators, 2 Land Raiders) and Predator Squadron (3 Tanks).  This seemed like a well rounded and balanced force with sufficient firepower to eliminate most threats and enough mobility to grab objectives. 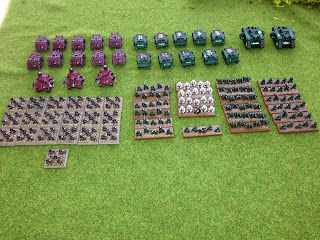 My Battle Company was represented by the third company of the Dark Angels Chapter.  This noble first founding Chapter also provided Terminators from the Deathwing ably supported by their Land Raiders. These stoic troopers were augmented by a Tactical Company from the Flesh Tearers who also brought along their Predators for some added fire support.
My opponent went for two Tactical Companies backed up by a full Land Raider Company (9 Land Raiders plus a command Land Raider - that's a hell of a lot of fire power!!) 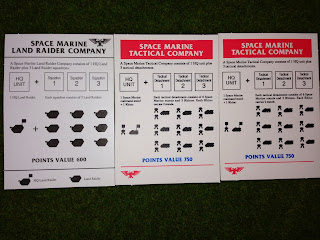 Set-Up
Set up in second edition involves each player placing four objectives in their own table half and then erecting a screen down the centre of the battlefield.  The players then set up their forces in relative secrecy before the screen is removed and battle ensues. 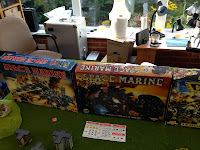 Finding a screen to cover a 6 x 4 table was quite hard; however I found a makeshift system that will make all you Old Hammerers smile...I used the box lids from my copies of 1st Ed Space Marine; 2nd Ed Space Marine and my two copies of 2nd Ed 40k.....ah the memories!!
﻿ 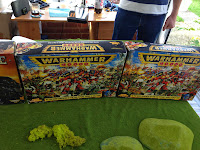 Once we were happy with our troop dispositions we removed the screen and the battlefield looked like this... 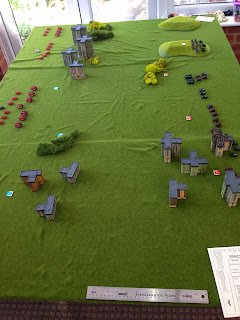 The small card markers above indicate the objectives (players accumulate VPs for holding objectives at the end of each turn; these are cumulative throughout the game).  My Dark Angels tactical marines dismounted from their Rhinos and held the objective (holding units need to be the closest troops within 15cm) on the far right. To their left are the Deathwing and a few Flesh Tearers.  In the centre of my line are the DA Assault Marines, more FT Tactical Marines and the Predators.  To the left of my battle space the DA Devastators set up inside one of the sky scrapers.

The Blood Angels all began the game mounted in their vehicles ready to speed forward and grab objectives.  Their battle line was spread across the whole board. One squadron of Land Raiders shored up the left flank whilst the other two squadrons and the command tank positioned themselves in the centre. 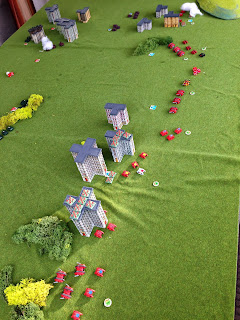 The game uses a clever system of orders to determine what your troops do each turn.  Each player secretly chooses to give each of their detachments one of the following orders:

First Fire: Troops can't move but can shoot before everyone else.
Advance: Can move at normal rate and shoot second
Charge: Can move at double rate but can't shoot. Charging is the only way to move into close combat.

Orders are displayed on small markers that are placed face down by each of the units. Once every unit has been given their orders the cards are turned over and revealed.  Each player then rolls a d6 and the winner decides whether to go first or second.

My devastators went on to first fire in order to maximise the effectiveness of their heavy weapons.  The tactical marines on my left flank charge forward to try and steal my enemy's objective as soon as possible. The rest of the force are on advance orders to give them a degree of flexibility. 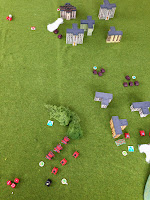 The Dark Angles tactical squads remain static and hunker down by my right hand objective.  The central troops edge forwards in order to claim one of the middle objectives located within the forestry block. Sadly my barrage of shooting delivers little (most Space Marine units need a 5+ to hit).

The enemy's Blood Angels roll forward in a block of crimson ceramite; unleashing a volley of heavy laser fire that incinerates one of my Predators in a ball of flame. 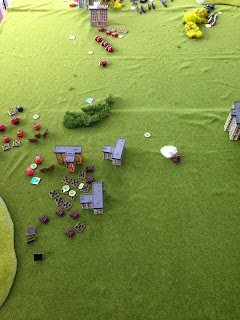 In subsequent turns my left hand tactical squads power forwards towards my opponent's flank objective.  This initial grab for power goes well and the troops move with such momentum that the Blood Angels find it hard to respond quickly enough.  However a squadron of Land Raiders is diverted from their centre line and they roll towards my soldiers slaying many of my loyal Marines with accurate bursts of laser fire.  My devastators based in the buildings support this advance with a withering hail of covering fire that cuts down a host of enemy infantry.  The tactical marines add their bolters to the volley and slay another two stands, a cheer goes up but it is cut short as three of their own stands are butchered in return.  Additionally the predator squadron is obliterated which grants my opponent some easy VPs early on. 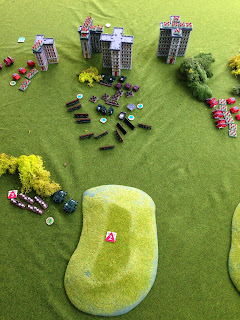 In the centre of the battleground the DA Assault Marines; Tactical Marines and the FT Tactical Troops roll forward and dismount with the goal of dislodging the Blood Angels from the tower block and claiming the objective which is hidden behind it.  In my head this seemed a great idea....

However as I watched the enemy Land Raiders and tactical squads surrounding my beleaguered forces I cursed my poor strategy as 11 stands of Dark Angels and 1 stand of Flesh Tearers are exterminated....Bugger.

Meanwhile in the back ground the Deathwing and their Land Raiders attempt to secure my own objectives (once an objective has been secured it will still remain under your control even if your troops leave it...until the enemy move up and take it off you that is). 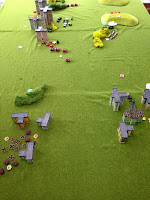 Further bloodshed ensues in another turn of brutal gunfire (the rate of attrition in Epic is astounding, marines die at an astonishing rate and vehicles aren't much better.  If you like carnage on a massive scale then this is the game for you my friends!) 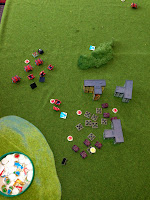 Back on the left flank and thanks to the combined fire from my devastators and tactical marines (supported by their inspiring commander) - all of whom are on First Fire orders, five Blood Angels Rhinos and two further tactical squads are sent to meet the Machine God and the God-Emperor respectively. One of my stands is also reduced to cinders by a Land Raider's heavy lasers. 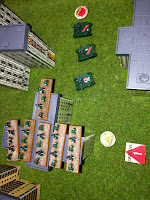 At this point my opponent has slain enough of the Dark Angels tactical company to break them (instantly earning a load of VPs); this means the remaining detachments from this card have to take a morale check. The tactical and assault squads who have been butchered manage to pass the check, but ironically the devastator squads who haven't even been shot yet appear to be terrified by the sounds of their brothers being butchered over the vox-net; and so fail the test (a 1 in 6 chance of failure...bloody dice Gods).  This means they are now falling back.  As they were in cover they don't need to move but they can't shoot etc until they rally....this was a real drama as these guys had been providing the majority of my heavy firepower thus far. 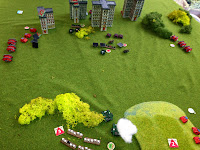 The carnage in the centre of the battlefield continues unabated and more of my stands are absolutely obliterated. My opponent at this point reveals himself as a grand tactician and uses this opportunity to speed a tactical unit up my right flank and snatch an objective from under my nose. Meanwhile one of my Land Raiders burns nearby. 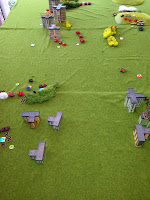 The massacre on the left flank intensifies with a Blood Angels Land Raider exploding and a load of Sanguinius's finest perishing in howling agony; their screams soothe my own Black Rage which is steadily building! 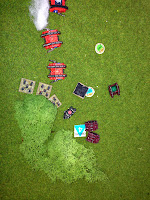 Seeing the opportunity this presents the Flesh Tearers take advantage of this moment to roll forward.  Having already seized control of the far left objective they mount up and smash into the next objective which is located in the nearby scrub. A gunfight ensues in the bushes and it is touch and go for a minute; but luckily when the smoke dissipates it is one of my remaining units that is closest to the objective marker, bagging me another much needed 5 VPs. 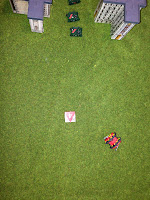 At the conclusion of the game this objective remains safely within the Blood Angels possession as my contingent of Rhinos are too far away to challenge control. 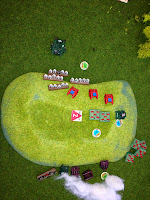 After the Blood Angels excellent snatching of my far right objective last turn their infantry proceed to dismount in order to consolidate their position. I am aware however that this is now very much the end game and so I throw everything I have left at trying to wrest back control of this objective.  Despite the combined efforts of the Dark Angels Commander, the Deathwing and the Flesh Tearers and everything else I could muster it is no use and my opponent still retains control of the objective at the end of the final turn...Damn!
And with that the battle was over. I pulled out a pen and paper and calculated the final scores as we had a much-needed cup of tea.  In the end the result was:
﻿
﻿
BLOOD ANGELS 71 VP
vs
DARK ANGELS/FLESH TEARERS 68 VP
So my noble opponent had won a hard-earned victory; being a gracious loser I shook his hand and threw him out of my f**king house...
Not really.
Overall it was a fantastic game which was both tense and tactically challenging all the way through.  It is a system that rewards planning and sound strategy. There were lots of points﻿ where it could have gone either way, but I have to admit my mate out-played me with his flanking manoeuvre.
Both my opponent and I literally couldn't believe how much fun we had on this one; the rules just make sense and flow so easily.  The whole system is highly intuitive and I thoroughly recommend it to any readers.  My mate and I have agreed that this is our new favourite set of rules and have spent the last few days frantically bulking our Epic forces! I am greatly looking forward to our rematch!
Posted by LegioCustodes at 16:24