Greetings all.... Now... first things first!! We have a celebration to commemorate... this blog that you are reading now is officially four years old as of last week!! So join me in wishing Happy Birthday to the Blog!! What initially started out as a loose assortment of my thoughts and findings around playing games of Rogue Trader has grown beyond anything that I could have imagined when I started it back in July 2013!

In fact this blog has now had over a quarter of a million visits and has a dedicated following of 124 followers! As well as this I have become a regular wargames journalist with frequent articles appearing in Wargames, Soldiers and Strategy and Miniature Wargames magazines, on top of which my first set of wargames rules (Outremer: Faith & Blood) is due for release in April next year! Truly from small acorns do big things grow!

Anyway enough reminiscing and on with what you really want to see: Toy Soldiers!


I have recently been working hard on painting up some more Saracen reinforcements for my frequent games of Outremer: Faith and Blood. The game itself is campaign based and allows fighters to gradually develop over time; so although games will usually have between 3-13 models per side it makes sense to have spare models with different equipment to represent your fighters as they develop with the passage of time. 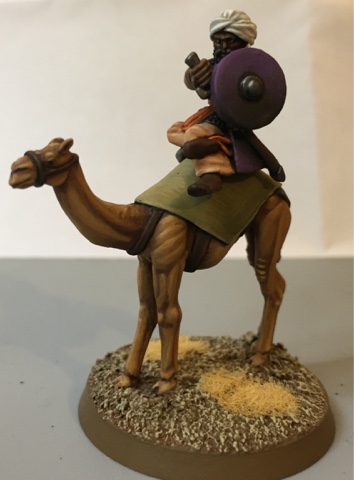 I have included comprehensive rules for mounted models in the game and they are powerful (but expensive) addition to a warband's roster; if used effectively they will act as a real force multiplier as well as looking pretty cool on the tabletop! 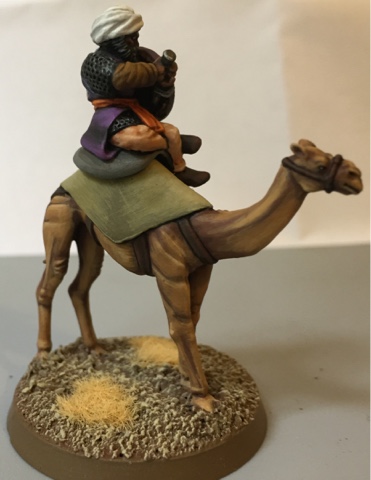 In my LAST POST you will have seen that I had painted up a horse-mounted knight for my Crusader force; well in order to give the Saracen's there own medieval tank I have painted up this armoured warrior riding a very large camel. 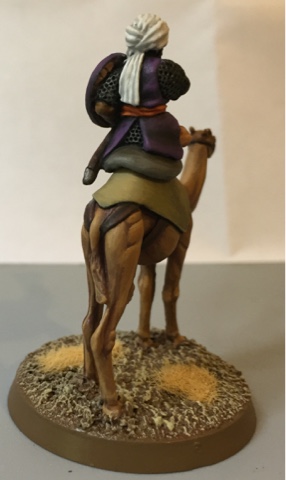 I enjoyed painting this model, if for no other reason than I really like camels!! The aforementioned creature itself took nine layers of paint to achieve the smooth coat that I wanted but I really think it turned out well! 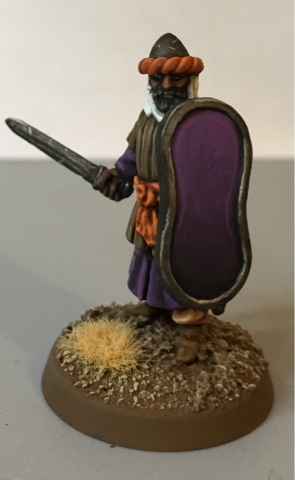 Saracen's in the game get pretty useful benefits for using light armour and so I wanted to paint up a few fighters clad in this way in order to make use of these bonuses in my battles. Additionally I also wanted to try my hand at painting the different shield types that were found in the various Islamic armies of the period. 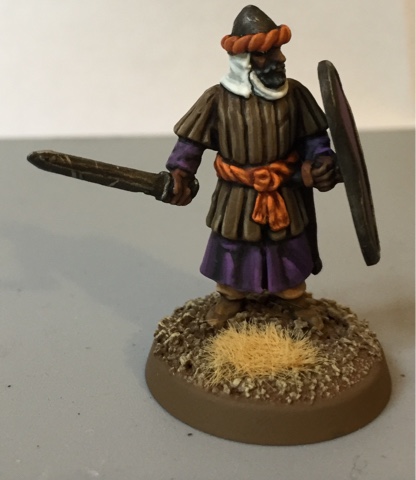 I am really pleased with how the leather armour turned out on this model, admittedly it came out slightly lighter than I thought it would, but actually the end result fits the overall aesthetic rather nicely! 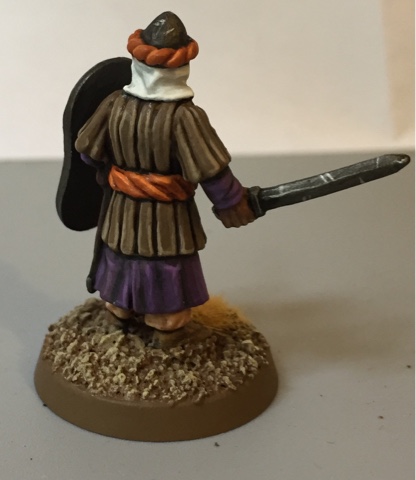 Whilst I am aware uniformity wasn't a massive factor during this particular period of history I have tried to keep a consistent palette throughout in order to tie the models together and provide my players easy reference when playtesting. 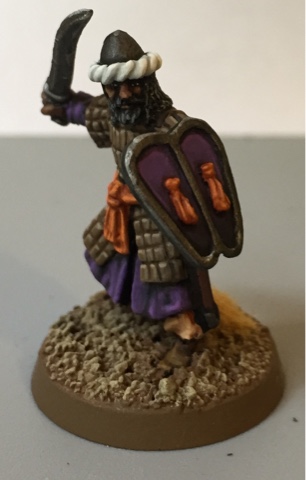 This guy is a personal favourite of mine as I really like his shield and I have always liked the look of lamellar armour on a fighter. 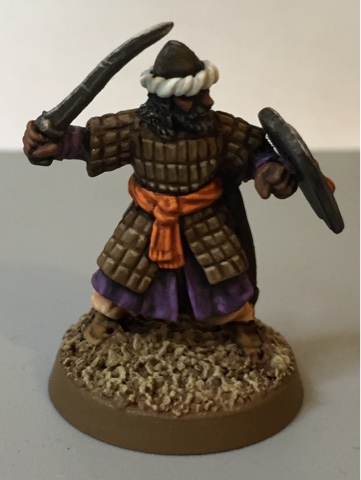 However after I decided to individually highlight each square on the armour with two different colours I found myself rapidly going off lamellar armour!!! 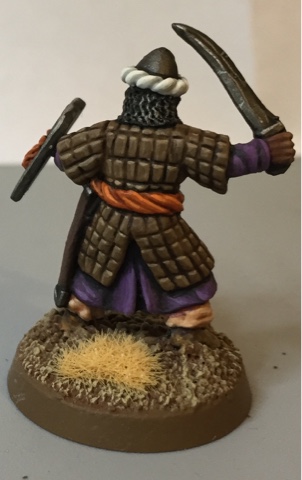 Nonetheless this technique does look good and invariably gives a much cleaner result than drybrusing could have achieved... 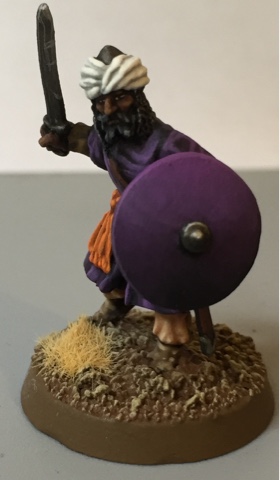 This figure will be used to represent the dismounted version of the camel rider that you saw earlier. 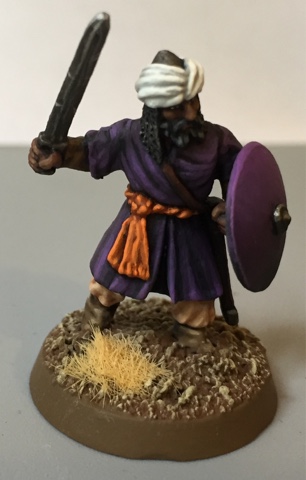 He will most likely be the Commander of my Islamic force and as such I have made sure he is equipped with the best weapons available. 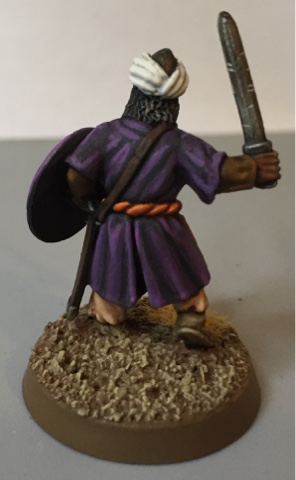 Next up we have some ranged firepower to help slay the Frankish pigs from a distance: 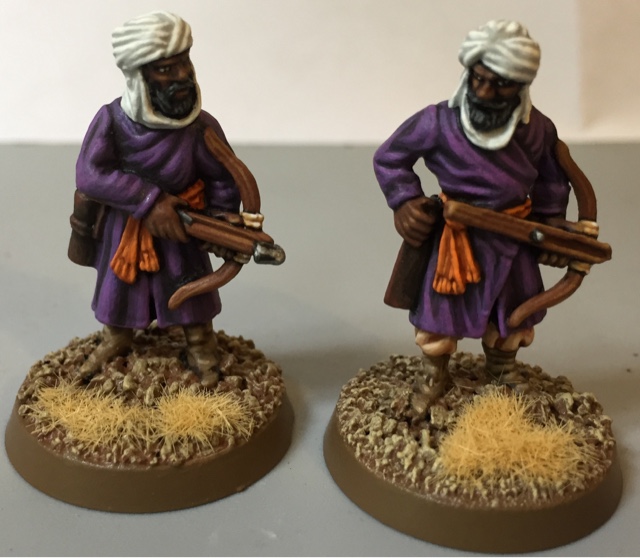 Whilst I have painted up a few Saracen archers and slingers previously it has to be said crossbows are just simply more powerful, and as such I wanted to add a couple to the force. I really like these models and I was able to paint them up in one afternoon...sometimes you just find models that you can'd put down and these definitely fell into that category! 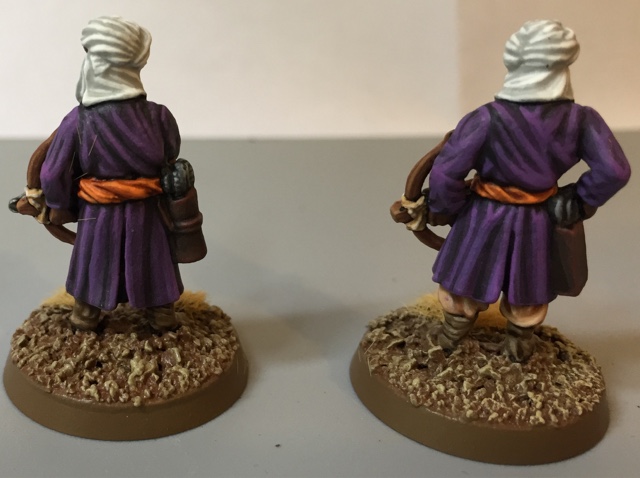 As you can see it's been a productive couple of weeks on the hobby front and I have really found my painting mojo at the moment which hopefully I will keep going with! I always say that having a goal is really good for getting the mined focused and increasing productivity.

Next up I am going to have to paint some more Crusaders and Military Order troops to provide an effective counter to these guys!!

Posted by LegioCustodes at 09:40