I managed to find some time to get a game of Second Edition 40k in this week with one of my long time best mates. We used to play a lot of games together a few years back but since then life and distance has got in the way which means our opportunities for tabletop action have been somewhat reduced. Thus when we do get a rare opportunity to link we are keen to make the most of it and get our forces on the table again.

For this game I set up my recently expanded urban battlefield that has been heavily reinforced with a lot more ruins and craters sourced from a variety of suppliers over the past twelve months. 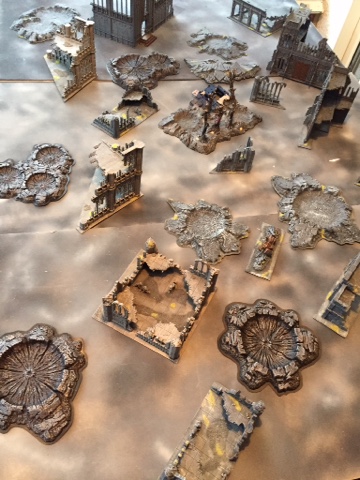 We drew our mission cards from the deck and then hid our goals from each other prior to set up. Just in case anyone needed an objective I placed my ruined Rhino terrain piece in the centre of the battlefield. However when my mate inquired as to where I had set up my Captain about 30 seconds into the game I quickly guessed that he had drawn 'Slay the Warlord' as his mission. 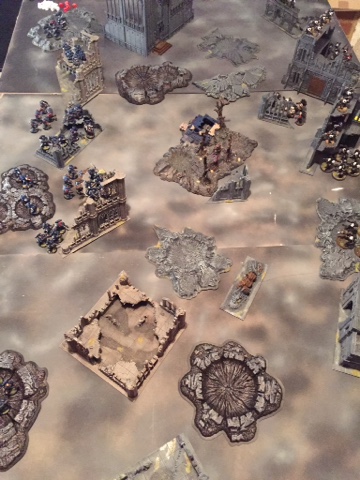 For this game I would command the forces of the Crimson Fists Space Marines whilst my opponent would be fielding his Black Templars, fellow sons of the Primarch Rogal Dorn.

Captain Valdez smiled to himself as he inspected the blade of his power axe, it gleamed in the sunlight as he turned it to look for any chinks in it's perfect form. As ever the mighty weapon was unblemished and unsullied. He knew many of his brothers scorned his choice of personal weapon, they preferred the more refined power swords that were reminiscent of those used by their parent chapter the Imperial Fists. However he had always preferred the sheer lethality inherent with an axe... like him it was brutal, powerful and could kill with one swift blow.

He heard the heavy footfall of another Astartes clad in power armour approaching from behind him, he knew without turning that it was his equerry, Brother Exxon. 'What is it brother?' he asked as he sheathed the axe on his back and spun to face his youthful assistant.
'Sir;' the younger warrior addressed his commander with due reverence, 'The Templars are here, they have landed on the opposite side of the training ground.'
Valdez nodded and then grinned wryly;
'Excellent, it has been too long since we have crossed blades with our cousins, I relish the opportunity to test my own mettle against theirs on the field. It is rare we get to train in such realistic environs with such a respectable foe. Come, let us make sure we make the most of it.'
And with that he set of towards his force's muster point where his squad sergeants would be waiting to receive their orders... 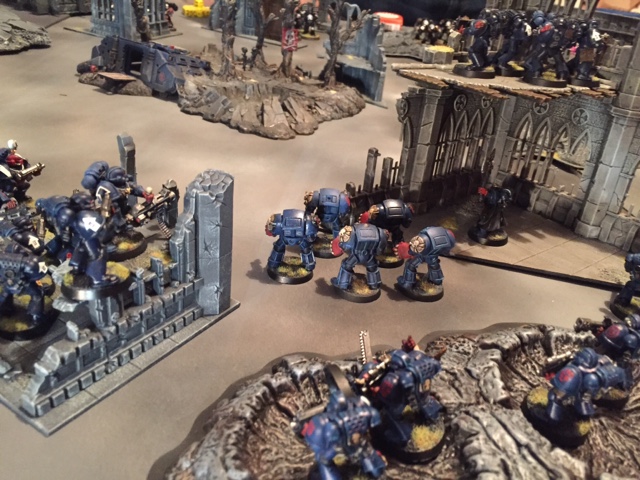 For this game I had actually drawn Dawn Raid as my own mission and so I was conscious that I needed to move swiftly in order to get a squad into the Black Templar deployment zone by the final turn. As such I decided to use my heavy weapons to fix my opponent in place whilst faster moving elements of the force moved to flank him as expeditiously as possible. 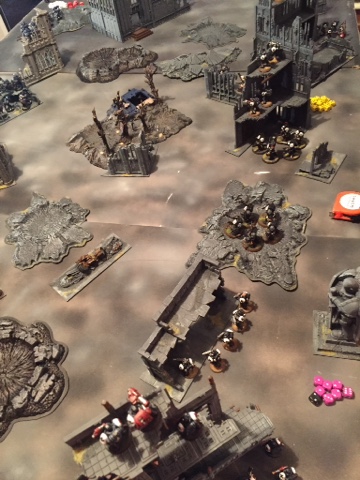 Additionally from his poor use of OPSEC my foe had accidentally revealed his plan to me and so I knew that the protection of my commander was also likely to be key in denying him precious victory points. 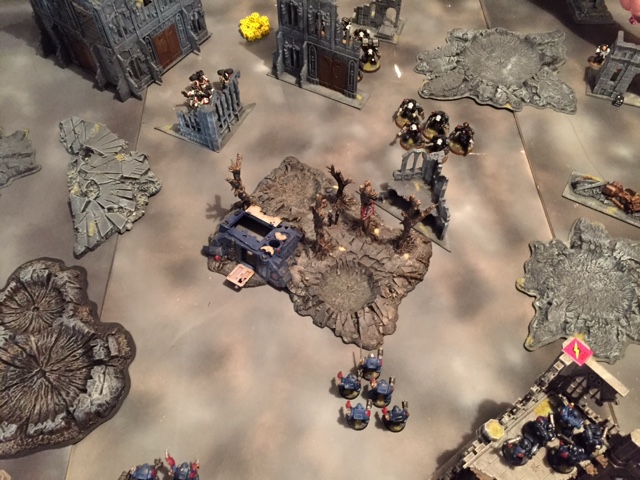 Knowing that he needed to kill my Captain forced my enemy into bold, aggressive action or risk defeat and so his force broke for my lines at the earliest opportunity...spearheaded by the redoubtable forms of two terminator squads. 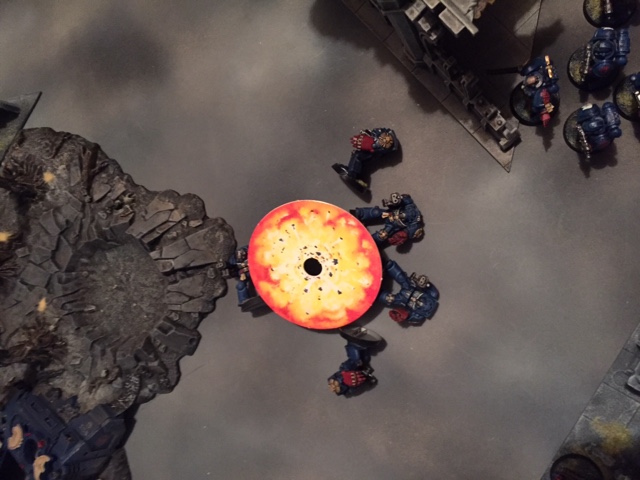 The best tool for dealing with terminators is of course ... more terminators and so I quickly pushed forward my own veterans in tactical dreadnought armour to counter this threat. However I forgot just how deadly plasma cannons were in second edition and I was quite surprised when the whole squad were mowed down by a volley of fire from a nearby devastator squad....That is a heavy loss to bear! The only plus point is that the Heavy Plasma Guns were fired on maximum setting and so would require a full turn to recharge before they were ready to go again....to be fair this was little comfort! 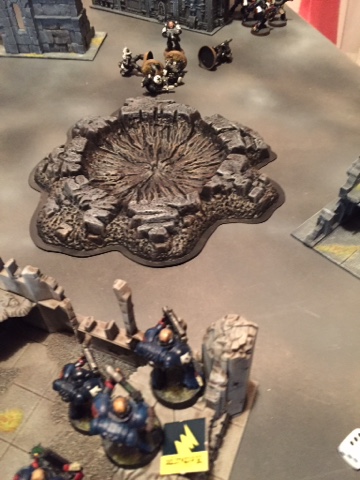 I decided to retaliate and my own firing line opened up on the sable warriors opposite... many were slain as bolt rounds and plasma beams slammed into their ranks. 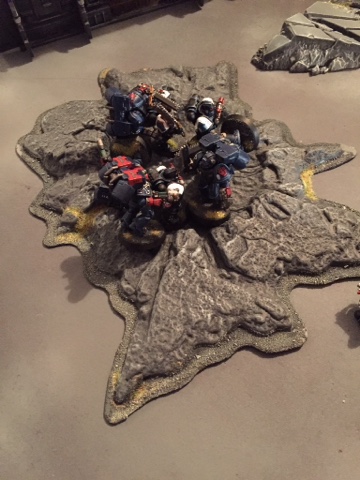 This was swiftly exploited by the arrival of a Crimson Fist Assault squad whose chainswords and bolt pistols roared with the rage of angry gods as they cut down their opponents. 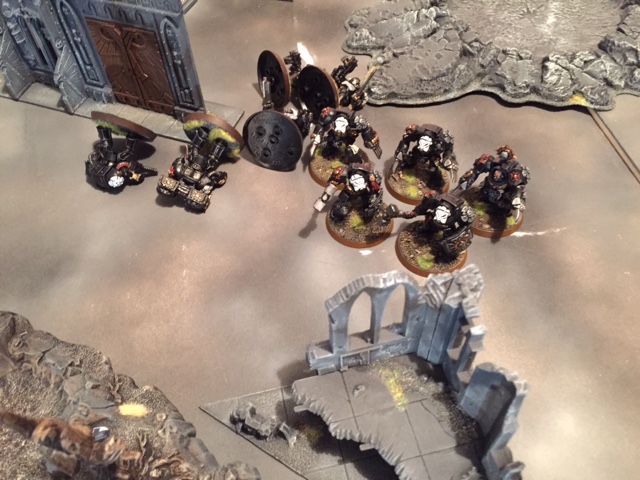 ...and of course my own Heavy Plasma Guns were also highly effective at rendering flesh, ceramite and adamantium into little more than molten slag. 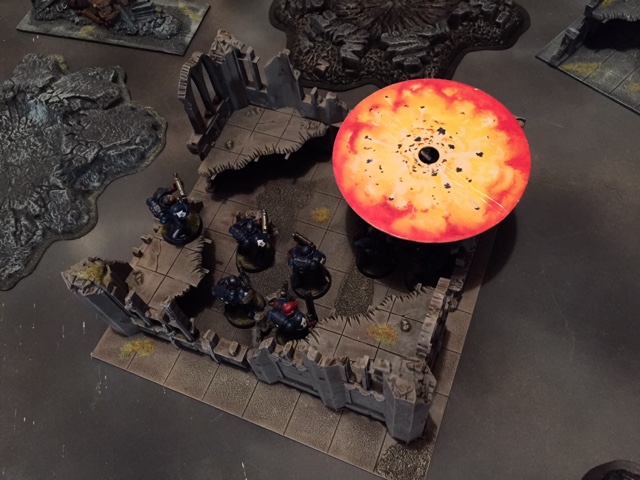 Soon the two opposing groups of heavy weapon marines had hunkered down in multiple sets of ruins and began engaging each other in a war of attrition, neither side wishing to allow their foe to have free reign with their might tools of annihilation. 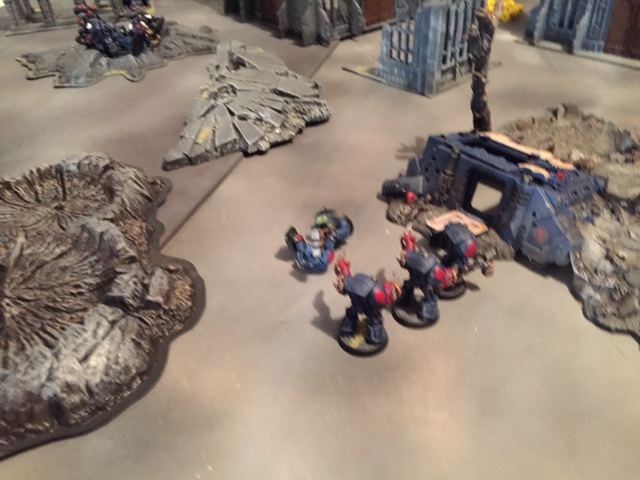 Despite the fun of blasting my foes off the table I kept my mission at the forefront of my plan at all times and so my remaining terminators pushed up the centre line towards my foe... 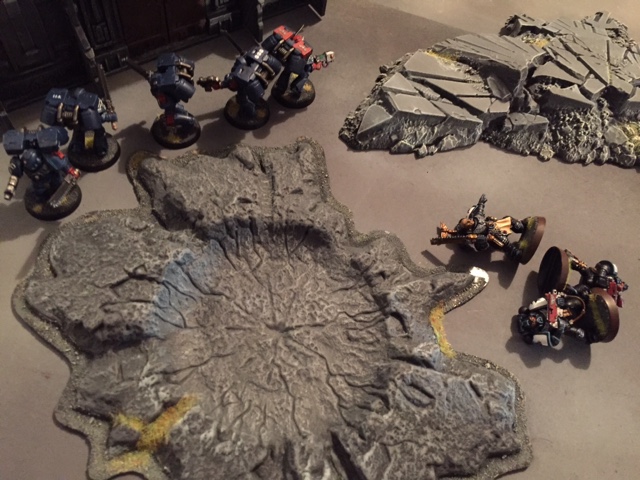 ...whilst on the left flank the swift moving  assault marines did the same; killing any who stood in their way. 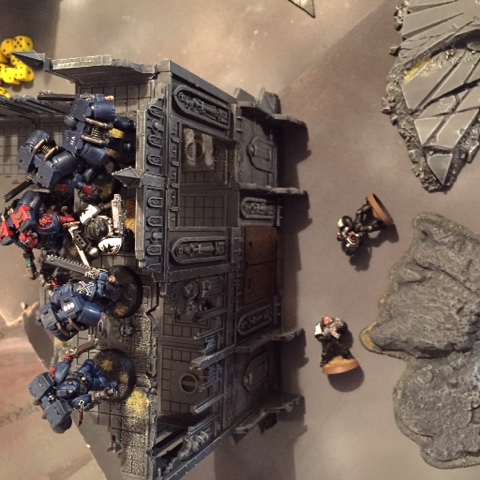 None were able to stand before the might of these highly skilled melee warriors and their route was littered with the corpses of dead and dying Black Templars. Some had been cut down by chainsword blades whilst others were thrown from the rooftops of nearby buildings. 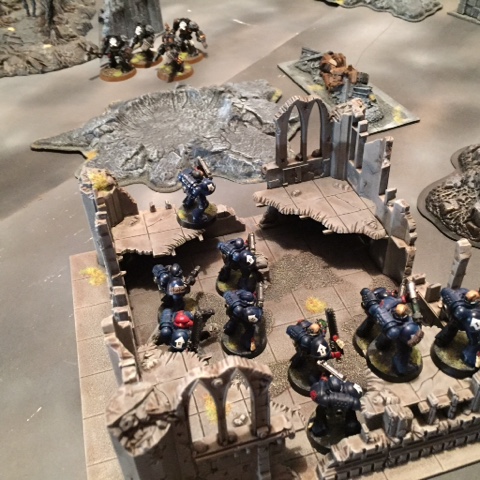 Despite an inordinate amount of firepower being aimed at them the Templar's Terminators were still able to make impressive gains across the battlefield, bullets and laser blasts ricocheting from their bulky armour plating. 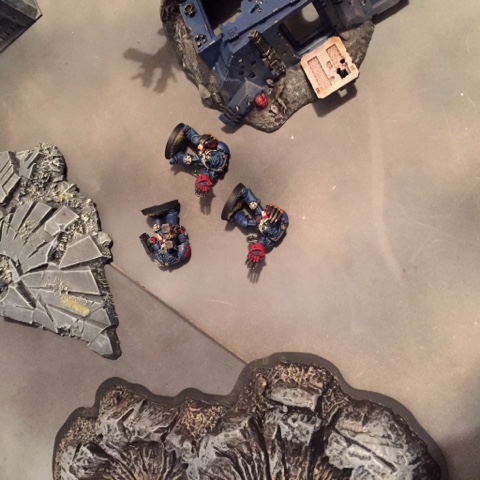 Sadly the same couldn't be said for my own Terminators who seemed to be wearing the budget version of the armour. However I wasn't too concerned as while the enemy were pouring all their firepower into these fellows... 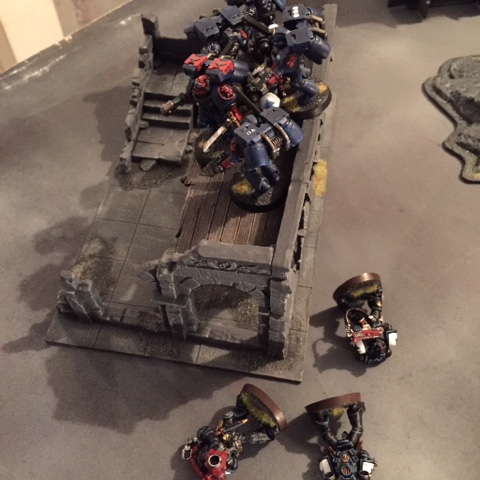 ...they were ignoring the real threat that was coming in from the sides! 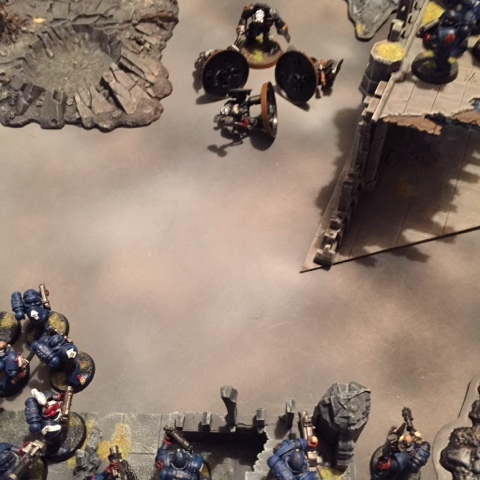 Tough...but not invulnerable; even Terminators die when met with enough firepower! And once the capacitors on my Heavy Plasma Guns had recharged their was more than enough firepower to do the job! 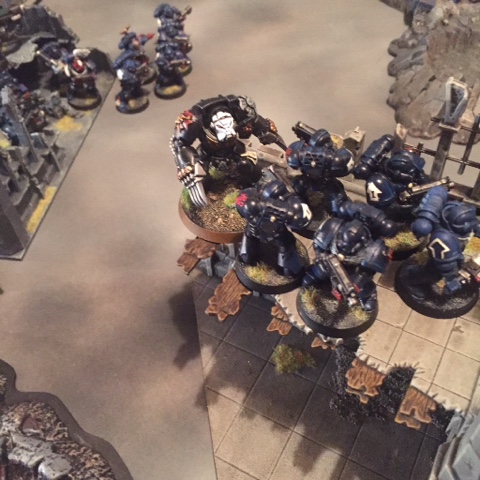 However one brave Terminator did manage to enter my battle space and took the heroic decision to charge a squad of nearby marines... 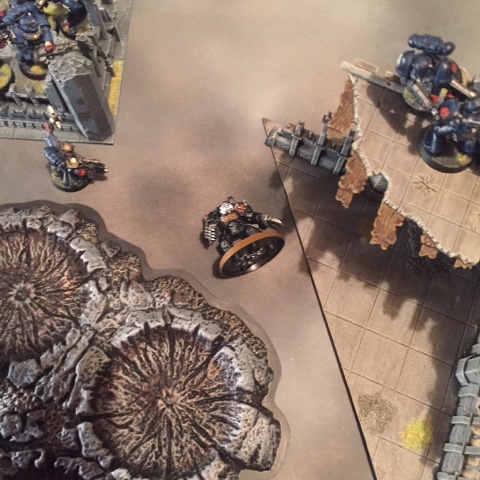 ...sadly this turned out to be a poor decision and he was swiftly dispatched by the blades of his cousins...whilst my surviving Captain looked on with an air of both respect and disdain. 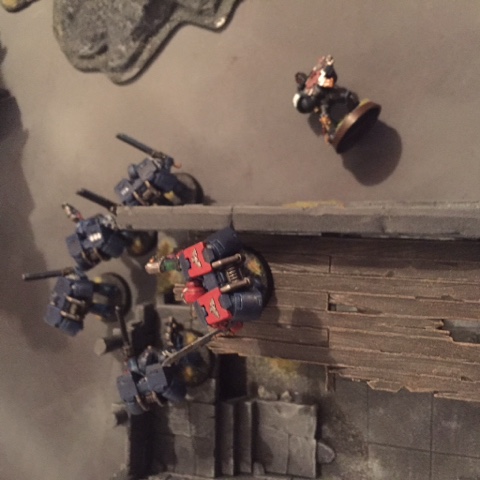 In the final turn my Assault Marines slew the last of their foes and moved to consolidate within the the Black Templars deployment area; scoring an extra five victory points for my forces. This was enough to swing the game in my favour and a quick tally revealed the Crimson Fists had scored 17 Victory Points compared to the Templars 9.

Overall this was a great game; and the sheer level of carnage was immense. The power of the Heavy Plasma Gun really shone out during this battle and these potent weapon systems accounted for a lot of casualties. It really was close right up until the last turn and could have gone either way; it was sheer luck that allowed me to seize a hard won victory right at the last minute. Hopefully we will be able to fight a rematch soon, and perhaps deploy a few vehicles to support our foot sloggers.

***
Captain Valdez mag locked his bolter to his armour and brushed the dirt from his robes as he saw a Black Templar approaching him across the battlefield. The Crimson Fist strode out to meet the imposing warrior who moved with a speed and grace that seemed at odds with the heavy armour covering his gene-enhanced bulk. They stopped a few feet from each other and nodded in greeting; both warriors sharing a fleeting smile. They were old friends these two, having fought together many times over the years and both were respectful of their opposite number. Valdez reached out with his right arm and the other officer gripped him by the vambrace in a warrior's greeting, 'Marshall Chalci; it is good to see you Knight; well fought today.'
The Templar grinned; 'Aye cousin; it is good to see you too, it has been too long since last we met... and whilst today has been an entertaining distraction I fear we must must now move on to more pressing matters.'
Valdez nodded solemnly, knowing exactly what his old comrade meant, 'The Traitors.' It was a statement, not a question.
Chalci inclined his head,' Aye, the Traitors...'
Posted by LegioCustodes at 07:05