After having spent a fair few months collecting and painting a selection of post-apocalyptic forces for some Fallout themed games it felt like it was finally the time to get these Wasteland wanderers onto the battlefield for a bit of action. As ever my dedicated girlfriend was happy to help out and also to get the NCR Rangers that I had painted for her onto the table and so we set some time aside to make this happen.  We were actually able to fit two skirmishes into one morning, but this post will only deal with the first battle... Have no fear, I will cover the second one at some point in the near future.

As ever I used the old but trusty Rogue Trader Rules to facilitate this battle as its small-scale narrative style suits the setting perfectly. I also bought some extra scenery and scatter terrain in order to accurately represent the California/Nevada Wasteland.

The narrative in question focused on a group of NCR Rangers led by Ranger Athena infiltrating a raider base in order to liberate a number of barrels of precious fuel that the gang-bangers had stolen from a hijacked Crimson Caravan.

'God dammit Jinks, will you stop spittin' that shit everywhere!' whispered Ranger Athena as she watched her heavily built deputy spit another brown globule of chewing tobacco onto the desert floor.
'Sorry boss.' he grunted as he hefted his cowboy repeater and kicked sand over the residue of his latest misdemeanor. Athena shook her head and went back to consulting the sketch map that she had been using to navigate her patrol to the nearby raider camp; just as she was about screw the damn thing up she heard a rustle in the bushes nearby. She cautiously lifted her own cowboy repeater in the direction of the noise in case this turned out to be an enemy scout, but she quickly lowered it again as Ranger Rodriguez crept through the orange foliage.  The young soldier's mouth formed a cocky grin as he moved towards her. 'Hell boss, if I decided to creep up on you then there ain't nothing that old shooter is gonna do to stop me.'
The patrol leader stared at him for a moment and then smiled, she knew he was right; all Rangers were expert scouts but Rodriquez's fieldcraft was almost supernatural. She knew some of the Rangers described him as half-man, half coyote...but never to his face.
'What is it Jackass?' she whispered, smiling as his face sneered in mock indignation.
'I've found 'em,' he said, 'Raider camp; big one by the looks of it...but the objective is there and it's ripe for the taking. I reckon hitting 'em hard and fast is the best plan.'
Athena nodded as she pulled the stock of her rifle into her shoulder, 'Let's go. Rangers, mount up.' 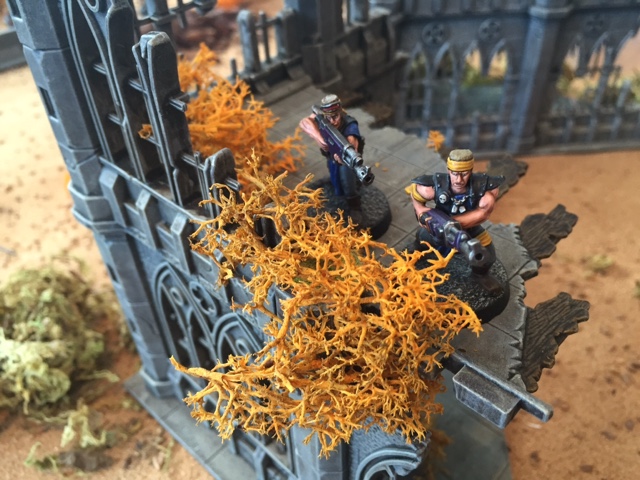 In this scenario the raiders are far greater in number compared to the forces of the NCR, but this is balanced out by the Rangers superior stats and firepower which makes them a truly terrifying foe...especially when nestled down in cover.

The Ranger patrol is led by the veteran Athena and all of her troops are equipped with stereotypical weapons including shotguns, revolvers and cowboy repeaters. Yee-ha! 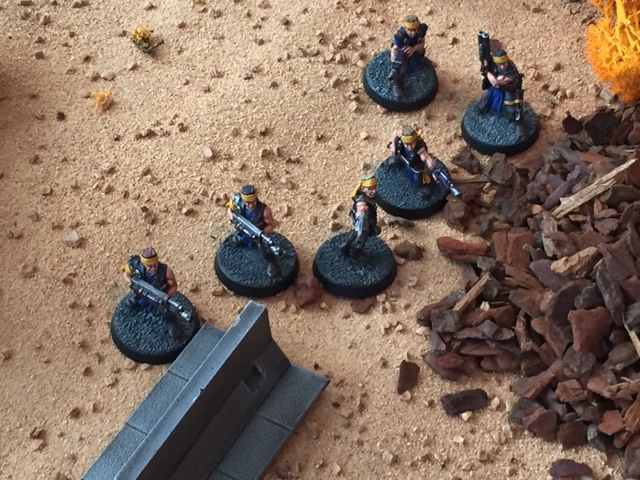 Meanwhile the gangers are toting rusted, poorly maintained pre-war weapons and lack the training and skill of their enemy. This means that they will have to bring their numbers to bear quickly before the superior marksmanship of the NCR starts to thin them out. 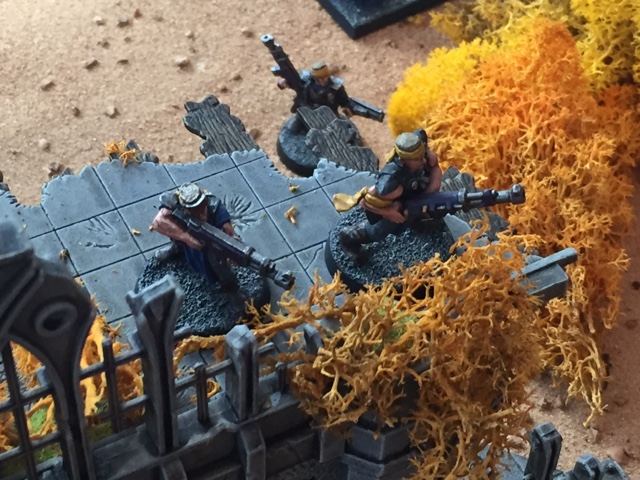 Despite their lack of training the raiders are still survivors of the wasteland and only a hardy breed can make such an environment their home. As such they are sensible enough to realise that taking the high ground early on will give them a greater chance of victory. 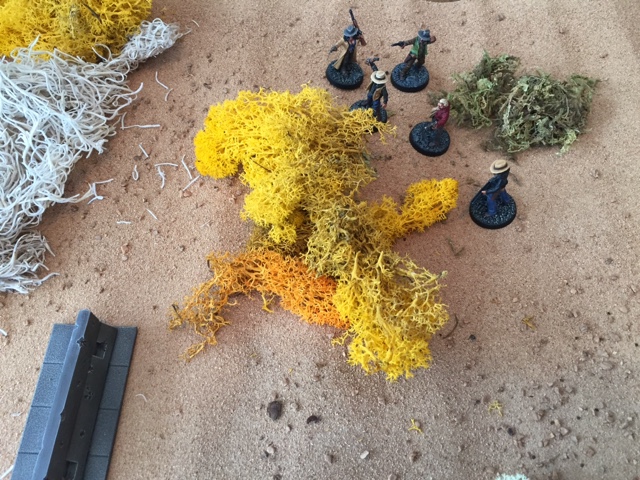 The Rangers of the New California Republic are some of the greatest fieldsman in the post-apocalyptic world and are quick to use natural cover to their advantage on the battlefield. Luckily this area was full of cover ranging from thick gorse bushes to ruined remnants of pre-war buildings. 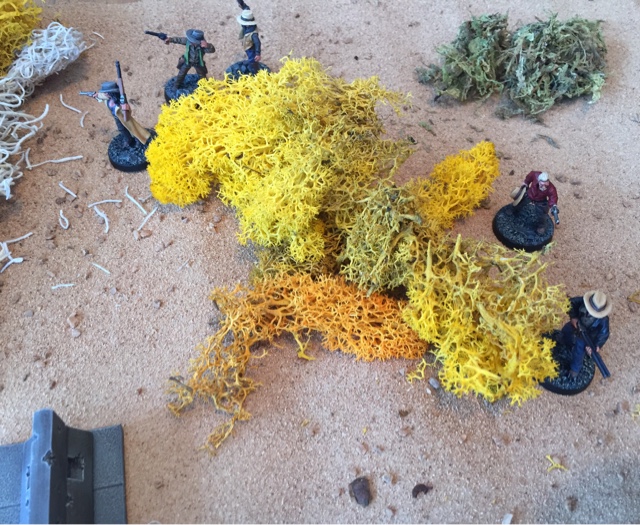 The Ranger squad quickly splits itself  into two fire-teams in order to spread their firepower. One is led by Athena whose Cowboy repeaters can provide long range cover... 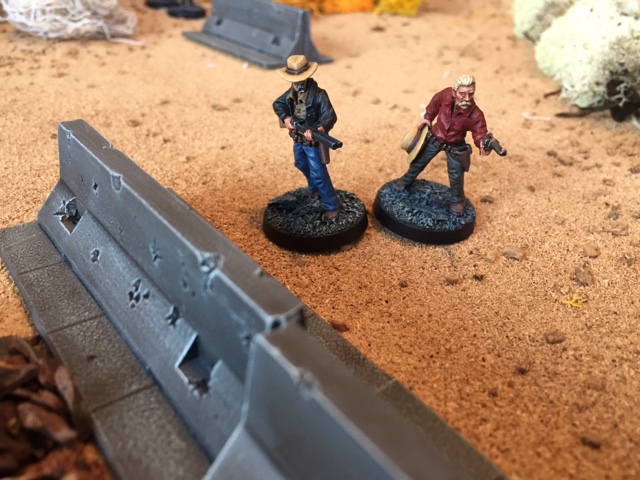 ...to Rangers Rodriquez and Murphy whose short range weapons need to be up close with the enemy to function effectively. 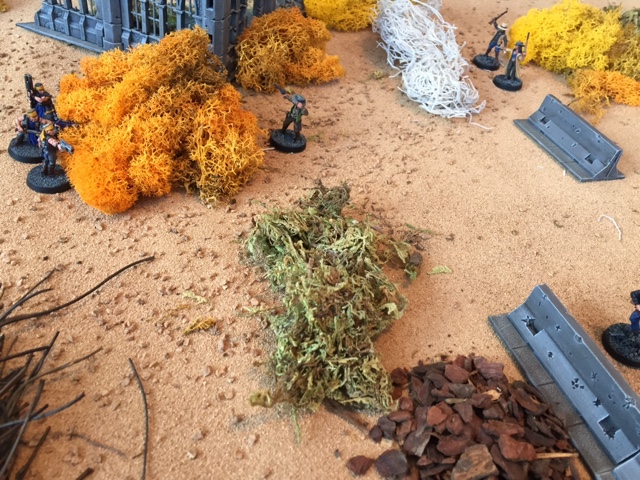 The raiders swiftly identify that they need to use their superior numbers to out-outmaneuver this foe and so launch a number of attack parties designed to scupper the NCR's plans. 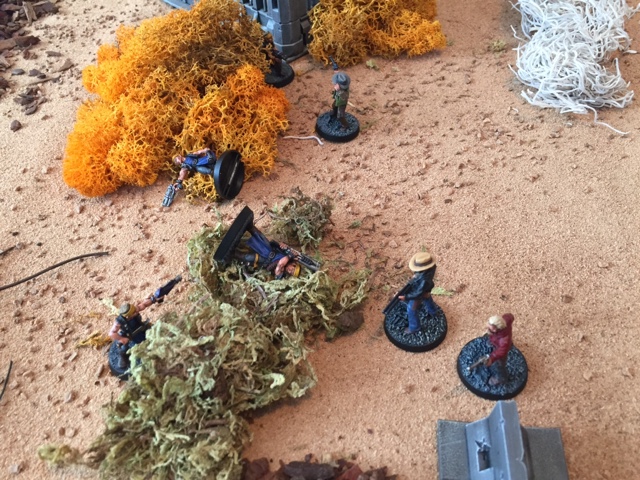 However the raiders poor discipline and kit proves no match for the NCRs elite and the first wave are quickly slain by disciplined volleys of lead from assorted cowboy pistols and rifles. 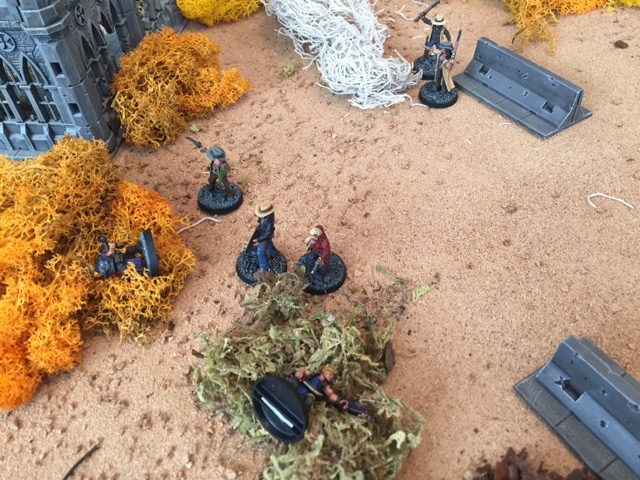 This is followed mere moments later by the supporting second wave also being scythed like chaff. It appears it is a dangerous time to be a raider in the California Wasteland. 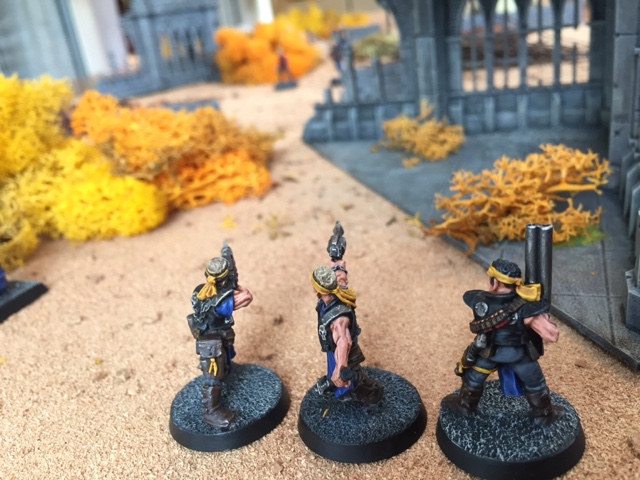 Luckily there are always more raider scum to throw into the meat grinder and so reinforcements are quick to enter the fray. A large dose of narcotics can always take the edge off seeing your friends butchered like dogs. 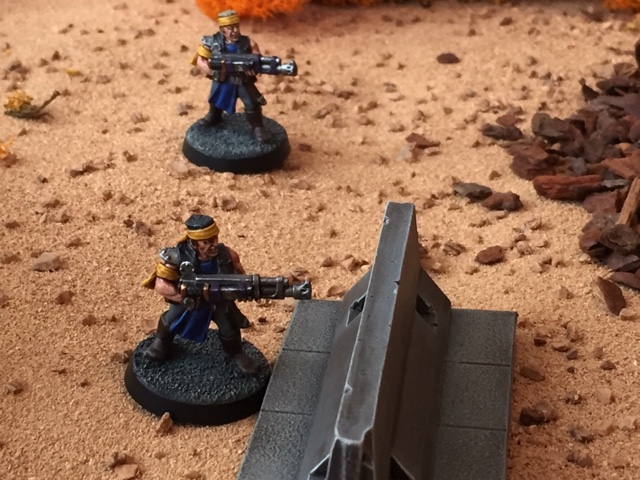 Whilst the pistol armed raiders run forward to engage the NCR in close quarters fighting their rifle-toting brethren hang back to cover their charge. 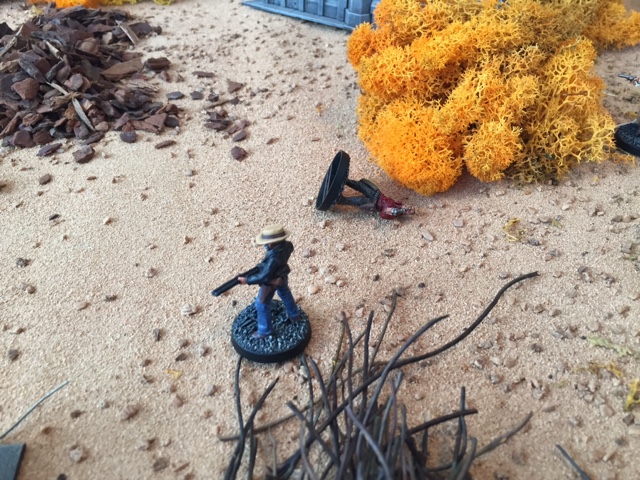 Eventually the sheer volume of fire takes its toll and one of the NCR's heroes falls, his body riddled by bullets. 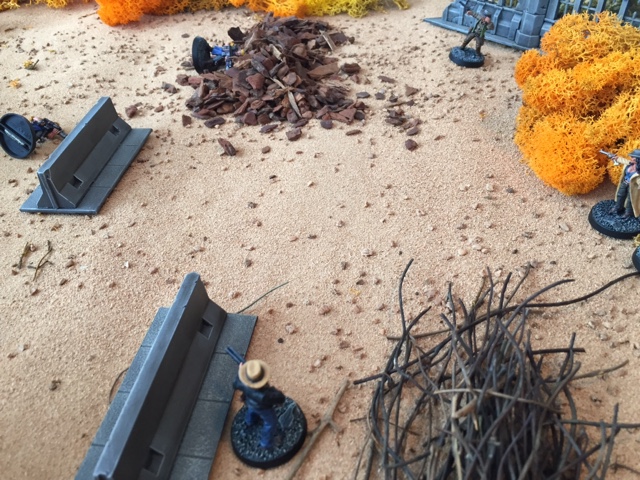 Retribution is quick to hit the scum and they die like vermin as the NCR Rangers avenge their fallen comrade a few seconds later. The accuracy and power of the Ranger's weapons is a real advantage if they can close the distance with their enemy. 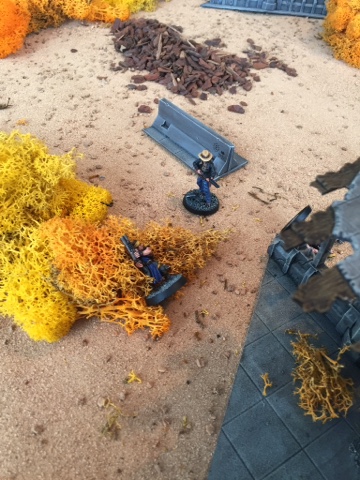 Once the distance between the two factions closes the fighting becomes even more brutal and soon all the Rangers bar Rodriguez lay dead or crippled in pools of their own blood. Undetered by this turn of events the hardy Ranger quickly reloads his double-barreled shotgun and charges into the Raider compound cutting down anyone foolish enough to oppose him. 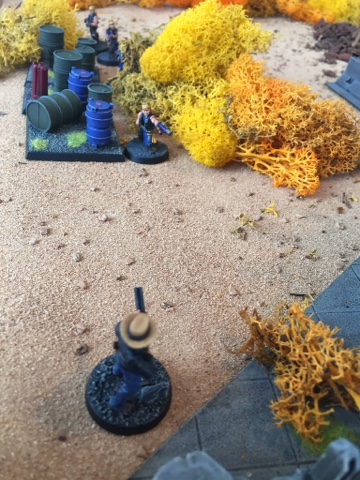 Alone and undaunted this hero of the Republic was a tidal wave of death and soon the compound represented an abattoir, the floor awash with blood and littered with the corpses of jet-addicted gang-bangers. Rodriguez was able to secure the objective and hold it against all odds until regular NCR troopers arrived to relieve him and give medical care to his wounded comrades.

Overall this was a bloody great skirmish and we both had a great time as the battle developed. The rules fit nicely into the setting (with a little modification) and it really demonstrates the sheer level of flexibility that Rogue Trader offers!  I am really pleased with how the game played and also I am very satisfied with how both the models and the scenery looked. I think I managed to achieve a setting that really captured the essence of the Fallout franchise.

I'm sure you'll be excited to know that the next game was equally fun and involved forces from both the Brotherhood of Steel and the Enclave......

Posted by LegioCustodes at 11:09