Having GM'd/hosted the Rogue Trader vs Fallout game at this year's BOYL and had such a thoroughly good time with all involved I have been motivated to paint up some more post-apocalyptic models for combat in the Wasteland.  This has been further spurred on by the news that Fallout 4 will be arriving on our consoles/PC's in November and my growing addiction to the Fallout: Shelter App on my mobile phone!

I completed a full squad of Brotherhood of Steel Paladins, Heavy Weapons Troopers, and a Scribe this time last year. So this time I felt the urge to churn out some opposition for the Brotherhood in the form of the Enclave!

The Enclave are probably my favourite bad guys ever, they are mean, tough and just look badass. I remember playing through Fallout 1 back in 1997 and thinking how cool the Brotherhood were with their power armour and advanced technology which allowed them to dominate the Wasteland. I was pretty shocked a year later when I got to the closing stages of Fallout 2 and encountered the Enclave, soldiers from the US Government who had better armour, better weapons and some sort of cohesive organisation...oh and Vertibirds...VERTIBIRDS!!


For me the lasting image of the Enclave is the above still from the start of Fallout 2 where these power armoured bastards have turned up to Vault 13 in a Vertibird to kill or enslave all the residents of the vault!

Luckily my mate commissioned the famous Brother Vinni to sculpt some Enclave Troops a few years ago and these are now readily available from his website (as troopers in Ant Armour).  My mate then decided he didn't want to paint these models and very graciously donated a few to me, needless to say I was so impressed with the sculpts I went straight online and ordered a few more.

When these arrived I gawped at them in wonder for a bit, then put them in a box and added them to the ever growing pile of unpainted miniatures where they remained for a few years...

However upon arriving back from BOYL 15 they were pulled out from exile, undercoated and arranged on my desk for painting! 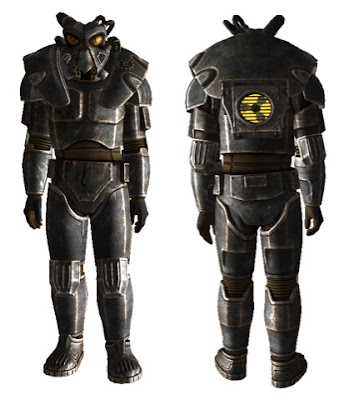 I was determined to finish these models and so I put all my other projects aside and set about painting them. For a project like this I like to have a good visual reference to work from and luckily a quick search on the Fallout Wiki turned up this super helpful image...literally the perfect picture!

And below is my visual representation of the Enclave's best and brightest: 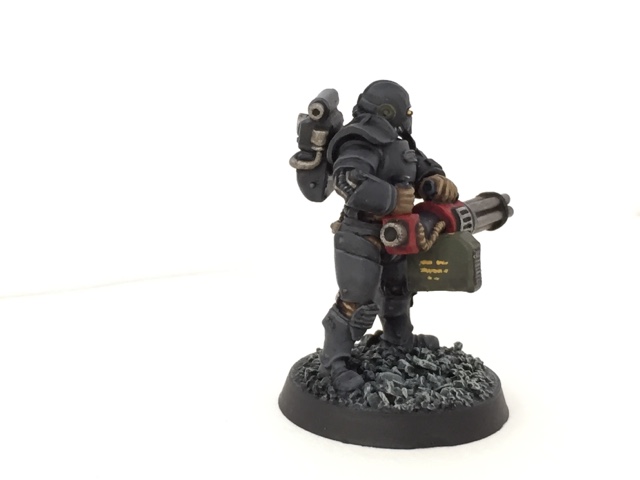 These models were great fun to paint and are really well sculpted representations of the troops from the computer game. I used a variety of paints from Coat d'arms, Vallejo and Citadel to achieve the dark, matt grey effect that I wanted (it took a while to reach this). Of particular note I'm really pleased with how my freehand Enclave symbols came out on their shoulders!

Next I am going to try and source some suitable models to represent the unarmoured Enclave officers from the game and get these painted up ASAP so that I can start playing some games in the Wastes!
Posted by LegioCustodes at 10:38