So after all the fun that was had on the Saturday of Oldhammer Weekend my gorgeous girlfriend decided to give me the complete Wargames experience and take me to Warhammer World for the Sunday. This meant that I could play a game of 40K with her on GWs professionally finished tables, partake of a huuuge burger in Bugman's Bar and also explore their new facility including the impressive Warhammer Museum and Forge World Shop! Wow....this was so amazing that I am going to have to cover it in multiple posts; so please bear with me!

We were given a very impressive looking six foot by four foot table in the middle of the gaming hall with a variety of scatter terrain that I laid it out to represent a small deserted outpost with a bunker in the middle. This bunker would form the objective for each player (essentially TAKE AND HOLD) and would need to be seized and dominated in order to ensure victory. The implementation of this basic mission allowed us to jump into things pretty quickly which was vital as we had only been allocated a three hour slot which I didn't want to waste shuffling cards in order to work out missions, etc. 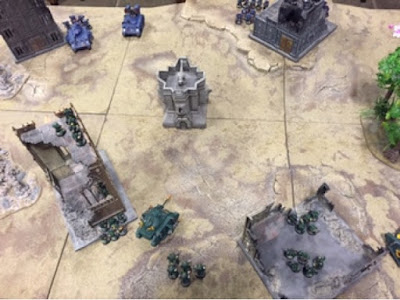 As ever my dedicated girlfriend had taken command of the mighty Crimson Fists Space Marine Chapter whilst I was leading the forces of the emerald clad Salamanders made up entirely of Rogue Trader era models. Each force consisted of two tactical squads, a devastator squad, a demi-assault squad, a terminator squad, one predator tank (destructor variant) and a whirlwind artillery tank. It is this type of low-level skirmish game that I most enjoy playing as it really allows you to make the most of the terrain and actually utilise some form of maneuver and tactics during the game. 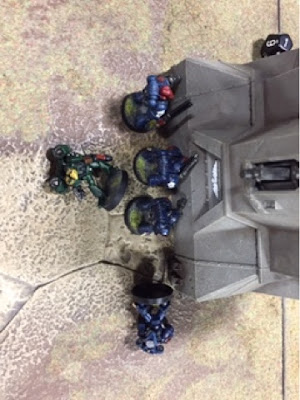 In the final turn the remaining Crimson Fist squad charged the bunker, knowing that they were unable to secure the building and win the game they could still deny me victory by being within three inches of the objective!! Curses and drats!!

Well that was an exhilarating battle fought over some truly lovely scenery and I really enjoyed every second of it!! There were some great moments as our forces duked it out for dominance of the bunker complex and it was pretty tense as each turn brought new surprises for both players. For me the greatest moment was when the two Space Marine Captain's met in an epic battle on the top of the objective, it was very cinematic as these two paragons of war exchanged blow after blow before one was finally defeated and thrown to his death...Amazing stuff!

Overall the game was a well-deserved draw due to the arrival of those pesky Crimson Fist tactical marines within three inches of the objective on the final turn...A good example of tactics and planning on the part of my girlfriend who played an excellent game and really kept me on my toes throughout!

Next time I will be looking at the various displays we visited within the Warhammer World complex...these were truly amazing so stay tuned for more hobby goodness!! They even had a retro display with some classic models and dioramas....