Chaplain Bak'leth fitted a fresh magazine into his master-crafted bolt pistol before racking its slide and slipping the ornate weapon into the grox-hide holster in one fluid movement. The veteran Salamander scanned the terrain ahead as he unhooked his crozius and thumbed the activation stud to ensure that the arcane device was functioning at optimum levels. Azure lightning flashed from the weapons head and Bak'leth smiled at the potent symbology of the device.

His ear-piece came to life with a buzz of static which after a few moments resolved itself into the deep  baritone voice of Sergeant Kelbar, the leader of his attached assault squad, 'Honoured Chaplain, we have the objective in sight. It is where the augurs said it would be and it appears to be intact...mostly. What are your orders?'

The warrior-priest nodded in thought, the Techmarines had been correct in their hypotheses as to where they would find this abandoned Rhino chassis. The vehicle itself belonged to another chapter, the Crimson Fists to be precise and by rights it should be returned to them to be refitted and made ready for war again.

However his chapter needed it more, the Rhino in question was of a newer and more advanced design than those fielded by his brethren. As such it was imperative that his team located, secured and shipped this vehicle back to Nocturne for full analysis and reverse engineering by the chapter's tech adapts.

In truth Bak'leth was sick of riding around in the same crappy Rhino that he had been since the days of Rogue Trader, it was too small and smelled strongly of that horrible polystyrene cement that everyone had insisted on using in the 1980's. He really wanted one of these more modern tanks, they looked a lot roomier and seemed to fit together more easily.

The Chaplain activated his mic, 'Move in Sergeant, prepare to secure the objective.'

Given that the forces involved were so small it only took a few moments to set up our troops and then we rolled off to see who would go first, the dice Gods were with me and I took the first turn; using this opportunity to push my soldiers as far forward as possible in order to dominate the area. Meanwhile my predator remained in situ continuously banging off shots at the opposing tank and successfully tearing its tracks off, causing it to spin out of control. 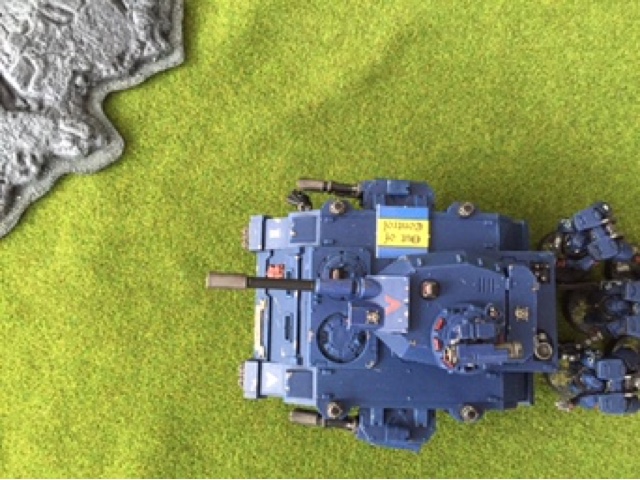 However the enemy's damaged predator managed to come to a halt in a fairly fortuitous location where all of its weapon systems were still facing my lines...so it quickly retaliated by destroying its aggressor...Ow 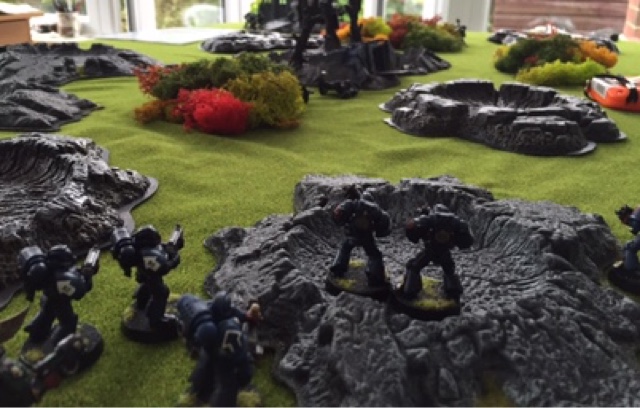 However my Assault Marines foolishly jumped too far forwards and exposed themselves to some worryingly accurate boltgun fire from the Crimson Fists tactical marines, a decision that resulted in over half the squad perishing, 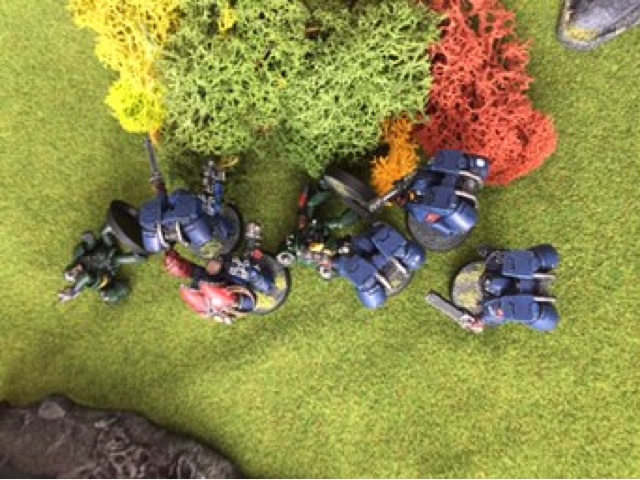 As if this wasn't bad enough the survivors were then also cut down by the chainswords of the Crimson Fists assault squad who vaulted into combat with them with a cry of pure rage incarnate. 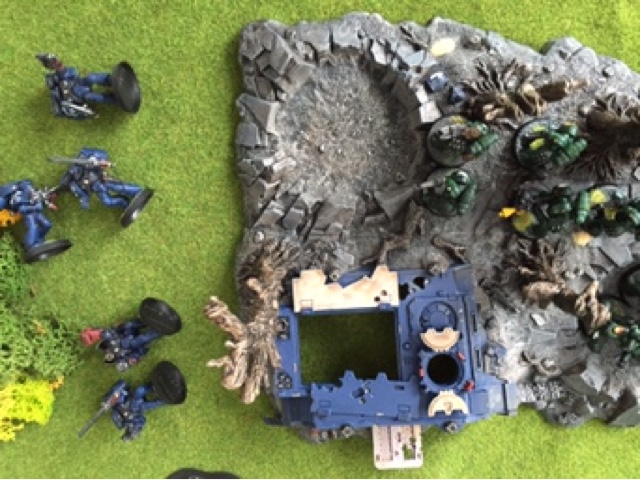 The enemy assault squad could only revel in their brutal glory for a few momnets before they too were despatched to the afterlife by the flamers and bolters of my own tactical marines who had jogged up to secure the ruined Rhino APC and avenge their fallen comrades. 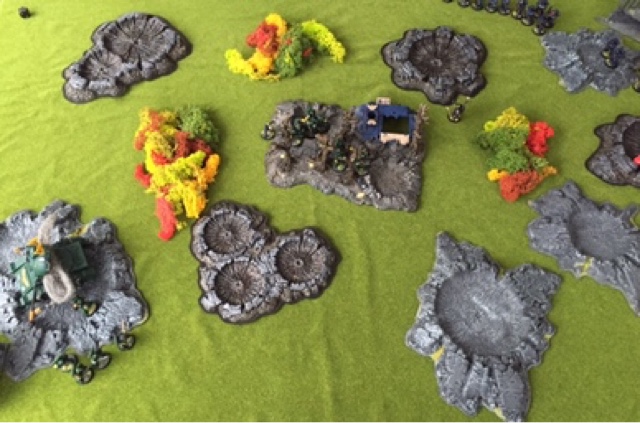 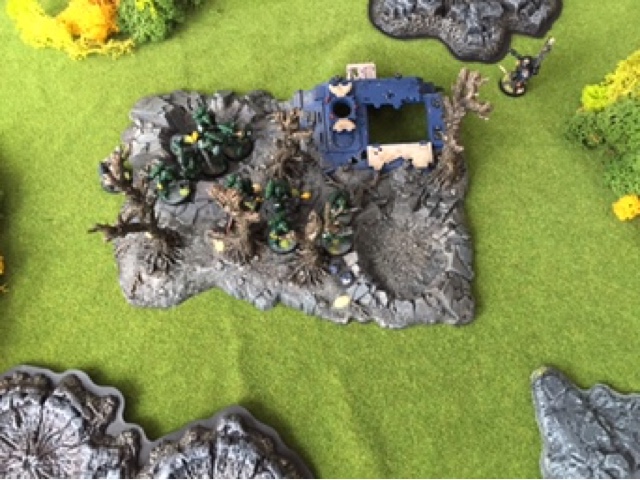 The Crimson Fists Commander saw that victory was slipping from his grasp and so in a desperate bid for redemption he sprinted towards the objective in order to seize control of it before the game ended. However as the final turn concluded he was still 4 inches away from the Rhino whilst my own men were a mere 2 inches... meaning that they secured the 5 bonus victory points; Hoorah!!

With the game over I tallied up the points, the Crimson Fists had secured a respectable 4 points but my green armoured sons of Vulkan had snatched victory with a glorious 7 points in total. It looks like that Rhino will be on its way back to Nocturne on the next available ship!

That was an enjoyable game, and at just the right size for a skirmish we were able to fit a second game into the day.

Now I hear a lot of people on the forums and blogs saying they like second edition but that they thought the vehicle rules were too complicated or slow to use. I personally don't feel these is wholly accurate and is a little unfair, and so to prove this point I decided to turn the second battle into a massed tank engagement with a Land Raider, 3 Predators and a Whirlwind on each side. 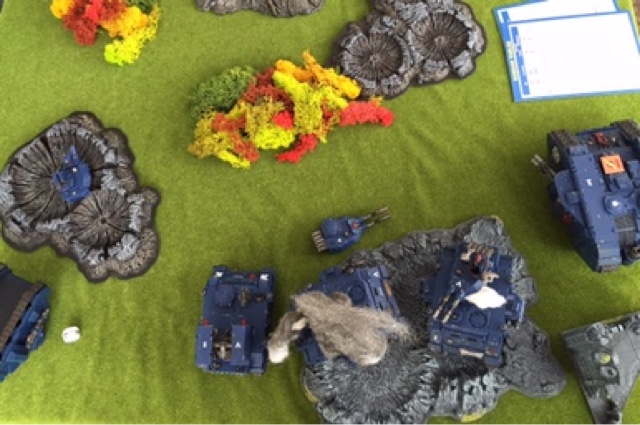 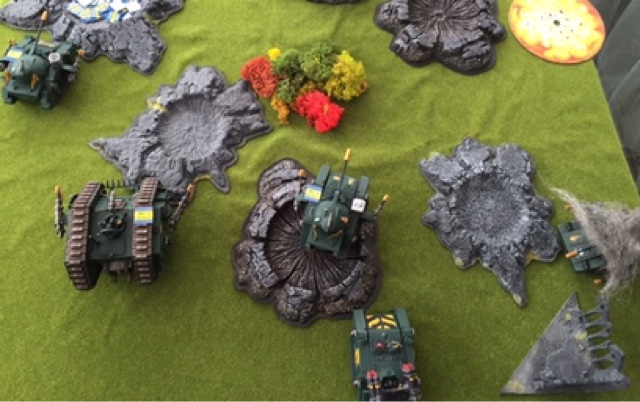 There were no victors in this game as we had played it just for a laugh, but it was great fun and really highlighted that the vehicle rules in second edition are perfectly serviceable, even with multiple tanks on the table. Occasionally anomalies do crop up, but if you are mature, like-minded gamers then these can be overcome in about ten seconds.

Overall this was a great day's gaming and we both had a really good time, I look forward to a refight in the near future!
Posted by LegioCustodes at 14:25