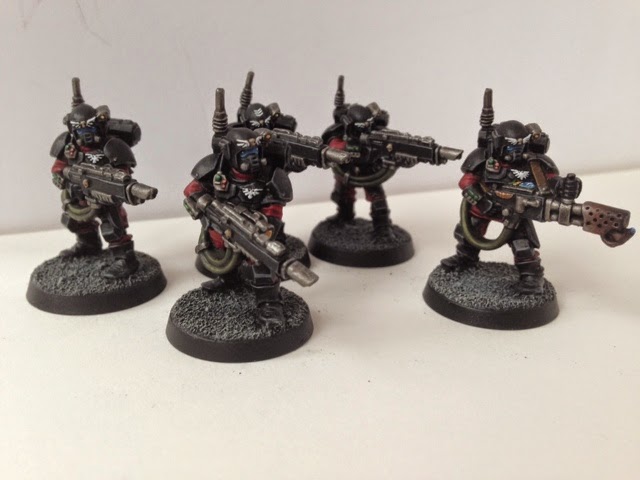 Additionally their armour, weapons and fatigues are militarily accurate, they fit the part of futuristic soldiers perfectly ...almost identical to the Colonial Marines from Aliens. This is where the new GW plastic Storm Troopers have gone so horribly wrong, I have come to terms with the fact that Space Marines have become high fantasy knights with guns, their armour literally jammed with skulls, scrolls and other shite...and to be fair I can live with it. However the storm troopers were last bastion of models that looked like modern soldiers ... So as per usual GW have trashed this, I literally felt a little bit of sick in my mouth when I saw the new models.... They're in fucking baroque plate armour! Genuinely...what on earth were the sculptors thinking?

Oh well ... enough ranting about the new stuff, these old models were great fun to paint and I already have some more of them sitting on the paint station waiting to see some paint. 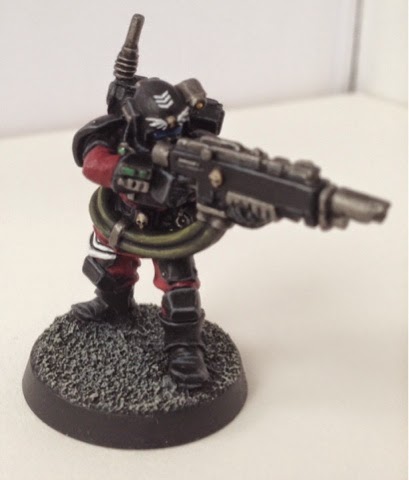 The only drama with these old Kasrkin models is that there was only one sergeant model released (equipped with a power sword and hell-pistol) and I already have one painted up for my original squad. In order the mitigate the risk of repetition I upgraded one of the standard troops to sergeant status by sculpting a set of chevrons onto his leg (identical to those that feature on the actual sergeant model) and then painting a  second set on his helmet.


My girlfriend loves flamer weapons, the joy of incinerating foes with those classic old card templates providing hours of amusement! Therefore the choice of special weapon was easy, and so this flame trooper was painted to provide his squad-mates some fiery support!

Well five troopers is hardly enough to make a battle winning force so I better get back to the paint station and start churning out some more warriors for my beloved Inquisitor to command... I'll let you know how it goes! Legio!

Posted by LegioCustodes at 10:58