The sounds of birds and wildlife scurrying about the serene landscape was quickly extinguished by the throaty growl of tank engines and the pounding of power armoured boots thudding into the ground as the Space Marines hurried forward. Amid this tumult Captain Alverado Francisco of the Crimson Fists Second Company surveyed the array of troops moving into position around him as he racked the slide of his master-crafted storm bolter. The polished blue ceramite of their battle-plate standing out in stark contrast to the dull grey slate of the primitive buildings that passed for habitation on this fringe world of the Imperium.

The Captain raised his magnoculars and saw the enemy warriors forming up opposite his men, their bulky forms almost resembling a black mirror image of his own Astartes... as he scanned the scene before him he could not believe that matters had reached this apparent point of no return. Not only were this foe to be counted amongst fellow loyalist Space Marines, they were Black Templars, brother descendants of the Primarch Rogal Dorn. This terrible fact alone caused Francisco to shake his head in despair. That such close brothers could tear asunder their fraternal bonds was a source of great pain and shame for him. What made it worse was that the situation was entirely unnecessary, if only the black-clad zealots that faced him could put aside their bigotry for a moment then this whole fiasco could be averted. But as he watched the gleaming black knights approaching his position he knew that this hope was entirely in vain; the Templars would never back down...just as his own Astartes would never turn their backs on their oaths.

The Captain's gaze panned further around the terrain until he caught sight of the geneseed canister laying prostrate in the middle of the battleground. This innocuous green container was the sole cause of the confrontation that was about to erupt on this throne forsaken world. Initial auspex readings indicated that this article was in fact an ancient geneseed storage device plucked from the very history of the VII Legion of the original Legiones Astartes. Inside it were stored the progenoid glands of 100 Astartes warriors that had been held in stasis for over ten millennia, however these were no ordinary geneseed samples, for each one had been extracted from the most potent psykers in the old legion.

If the integrity of these samples had been maintained over the eons then they offered the Crimson Fists an opportunity that could not be ignored...primary genetic material that could be used to reinforce their depleted numbers following the massacre on Rynn's World. This was a real and tangible opportunity to save the Chapter from the lingering doom that it now faced.

However the Templars disagreed, they felt that these genetic samples from the time of the Heresy should not be recovered lest they somehow release forgotten wraiths from that dark epoch into the present. This feeling was compounded further by the fact that the samples themselves originated from the old Legion's Librarius Division which stood in direct opposition to the Templars' own militant stance on the use of psykers within the ranks of the Adeptus Astartes.

And so it had reached the point where brother would once again shed the blood of brother on the field of war.

Francisco had given the Templars a clear ultimatum...all those who approached the Crimson Fists potential biological salvage would be killed...yet still they advanced.

He activated the vox 'All squad leaders, ready your weapons... The knights approach.'

The two forces deployed directly opposite each other, heavy weapons operators quickly moving into elevated positions where they could get the best arcs of fire on the advancing enemy warriors. Simultaneously the two tanks rolled forward, facing off at each other across the battlefield preparing to engage in an old school slugging match. 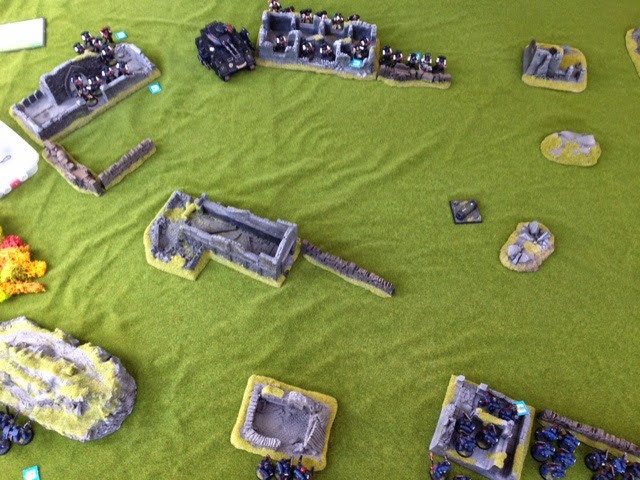 A number of the squads had deployed in cover and so decided to consolidate their positions further by going into hiding - which meant that their enemies could no longer see or shoot at them. 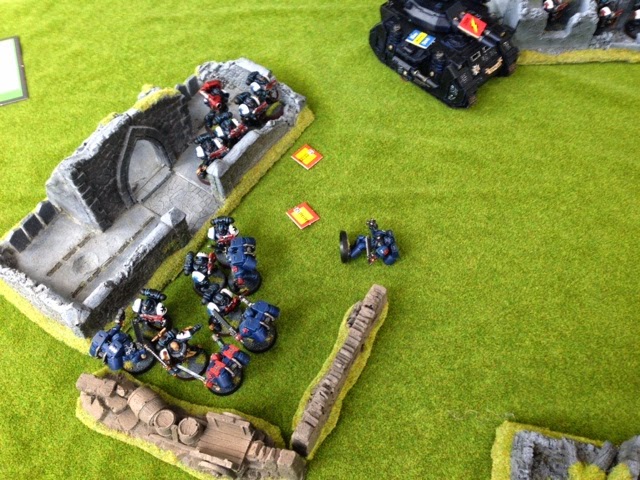 The first round of shooting was somewhat uneventful with the main highlight being the Templars' Predator jamming it's autocannon, meaning that it couldn't shoot until the jam had been cleared. Simultaneously my assault marines slipped around the left flank to engage one of the opposing tactical squads, their chainswords and power weapons cutting through the sable ceramite as though it were paper. 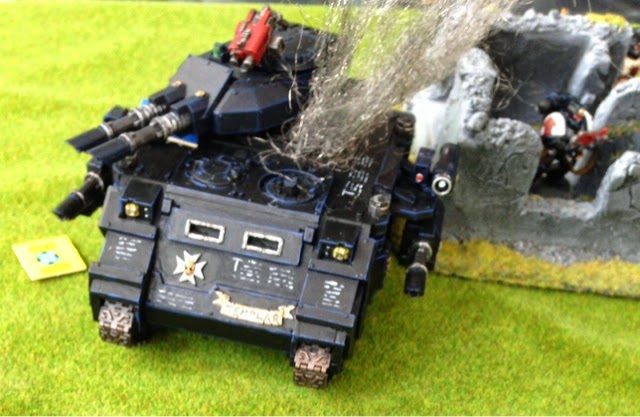 The Predator dual came to a quick end as the Crimson Fists vehicle's lascannons melted through the opposing tank's armour, causing an ignition in the tank's hull! 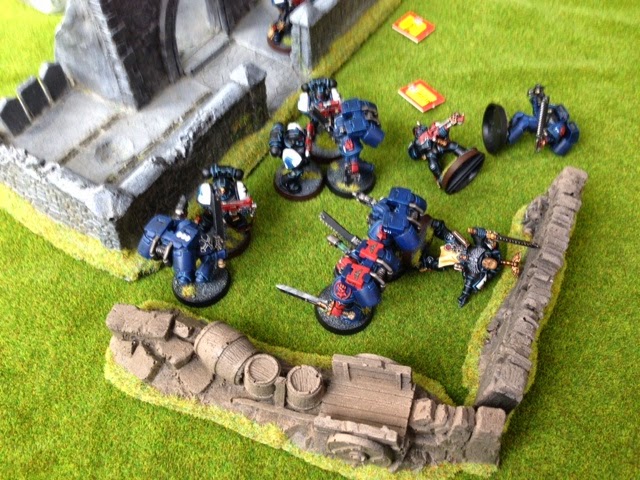 The close combat continued apace with space marines grappling each other to the ground, superhuman warriors falling under the flurry of mono-molecular blades as the rich blood of Dorn soaked the mud crimson.

The Templars then fired one of their missile launchers at my recently exposed infantry with a look of glee on their faces...however this quickly turned into a bitter grimace as the weapon misfired; exploding and killing one of their own men (hahahahaha... I love second edition). 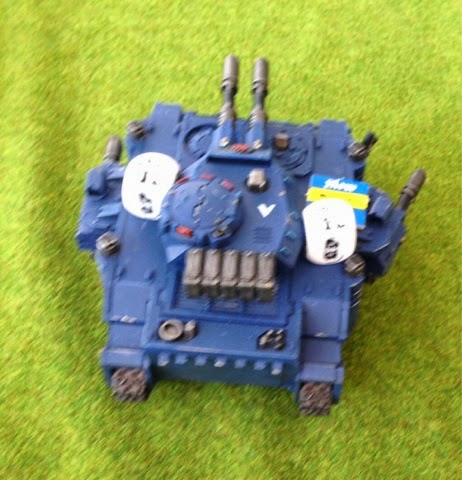 The Templars decided to go for an element of revenge and thus focused their heavy weapons on my remaining tank...a flurry of missiles tore panels of armour and weapons from the vehicle's venerable chassis as well as rendering it entirely immobile for the rest of the game. The turret however could still traverse and fire. 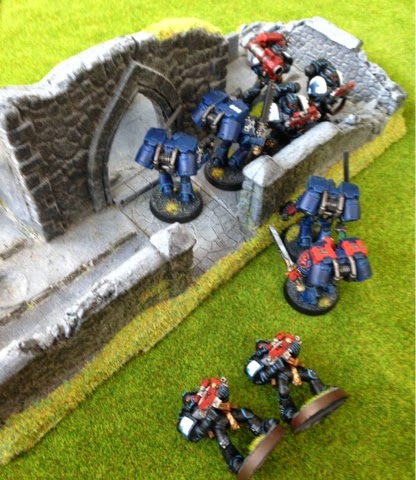 With the last of the Templars from the first combat squad dead my assault marines had the taste for blood in their mouths and so rolled into the next squad with a roar of pure hate on their lips! 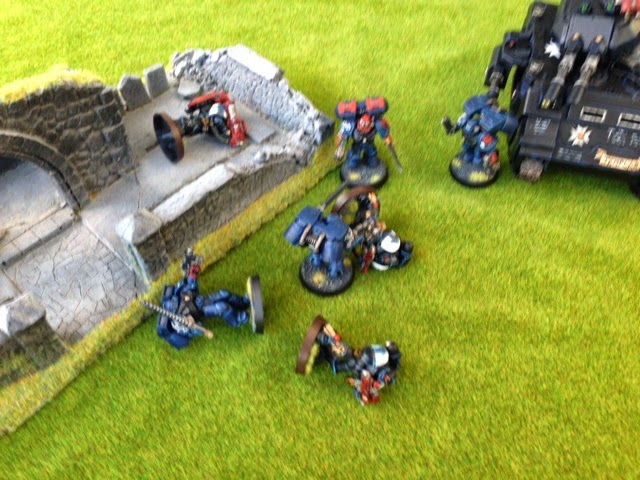 These black clad warriors were also butchered in short order, but not without causing a few casualties in return.

As the game entered it's final phase the Templars went for their winning gambit, robed assault marines firing their jump packs and leaping eighteen inches towards the objective. However they scattered quite a large distance leaving them disordered and out of minimum squad cohesion. 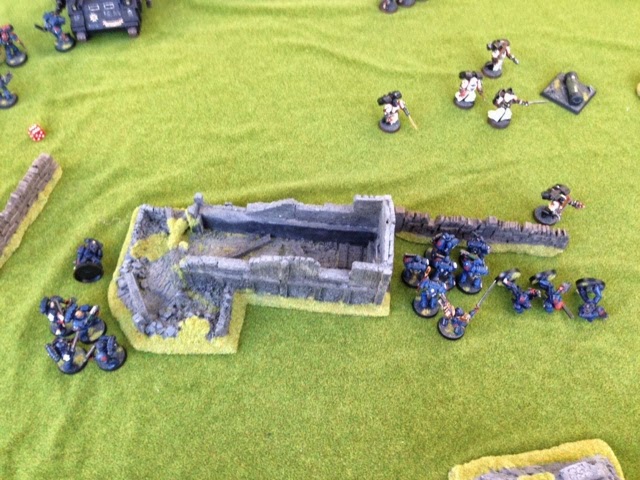 But despite this their shooting was bang on and over half a squad of Fists died to a volley of fire from their bolt pistols! 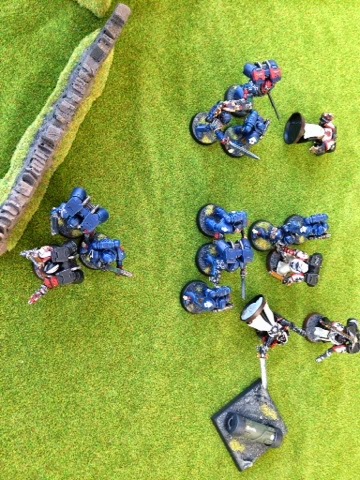 This wanton slaughter caused a fit of rage in the surviving Fists, and all available Astartes bundled into the melee in the centre of the board.

On the right flank a combat squad of Templars emerged from the nearby lichen woods before finally finishing off the enemy predator in close combat with a volley of krak grenades. Their cheers however were cut short as the explosion hit the tank's ammo reserves causing it to detonate...wiping out the entire combat squad in a raging fireball.... Gotcha

Meanwhile the melee around the geneseed canister escalated further still as more and more surrounding troops piled in to retrieve the precious genetic material. 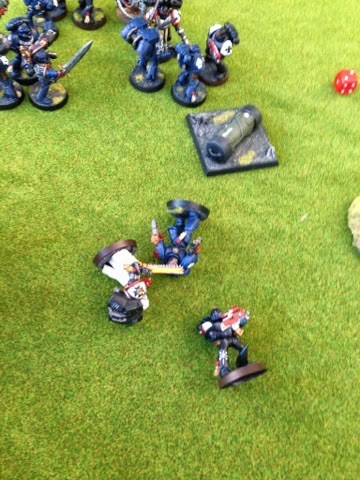 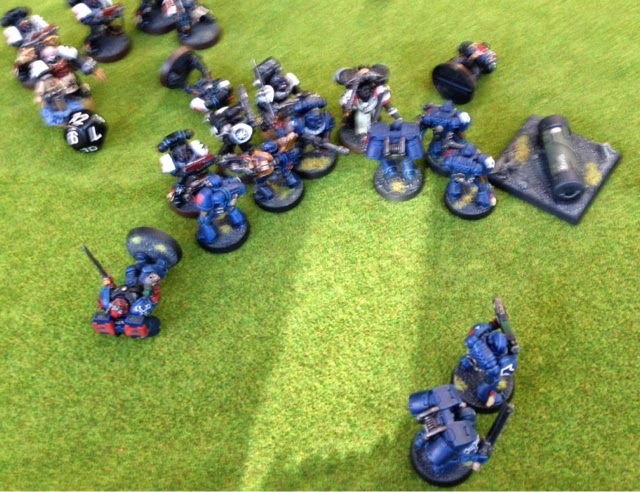 The strands of fate were fickle until the very last roll of the dice and all was in the balance right up to the final thrust of a chainblade...as the smoke settled on the battlefield and the commanders stood to count the brutal cost of this internecine conflict it was obvious that the contest had been close!

A quick tally showed that the Black Templars had (very) narrowly missed their objective as some of the surviving Fists had interposed themselves between the knights and the canister. In comparison three full squads and a tank had fallen to the blades and bolters of the Crimson Fists.
With these figures in mind the total was:

In all honesty this result doesn't show how close the battle was... If different combatants had fallen in the last round of close combat then the final outcome could have gone entirely the other way. Such is the fickle mistress of war!

This was a really good game, full of character and twists throughout...as one would expect from second edition! It was the first time I had used the 'overwatch' and 'hiding' rules and they were great. They really added a whole extra layer of subtlety and strategy to the game, and I found myself having to plan ahead much more thoroughly than usual in order to ensure my troops didn't inadvertently trigger an ambush that would strip their ability to fight! I will definitely be using these excellent rules again! I honestly didn't appreciate how much they altered the game play!!

I think it's safe to say both me and my mate had a great time and we are already planning a rematch between these two strands of Dorns lineage!! Perhaps these two forces story will develop further....

Posted by LegioCustodes at 14:44